Out of the Veil in Iran

Iran’s youth have been reeling under an economy marred by decades of US sanctions, corruption and the pandemic. The attempts to tighten the noose on social freedoms and the state’s heavy-handedness have therefore invited an almost instant and massive pushback 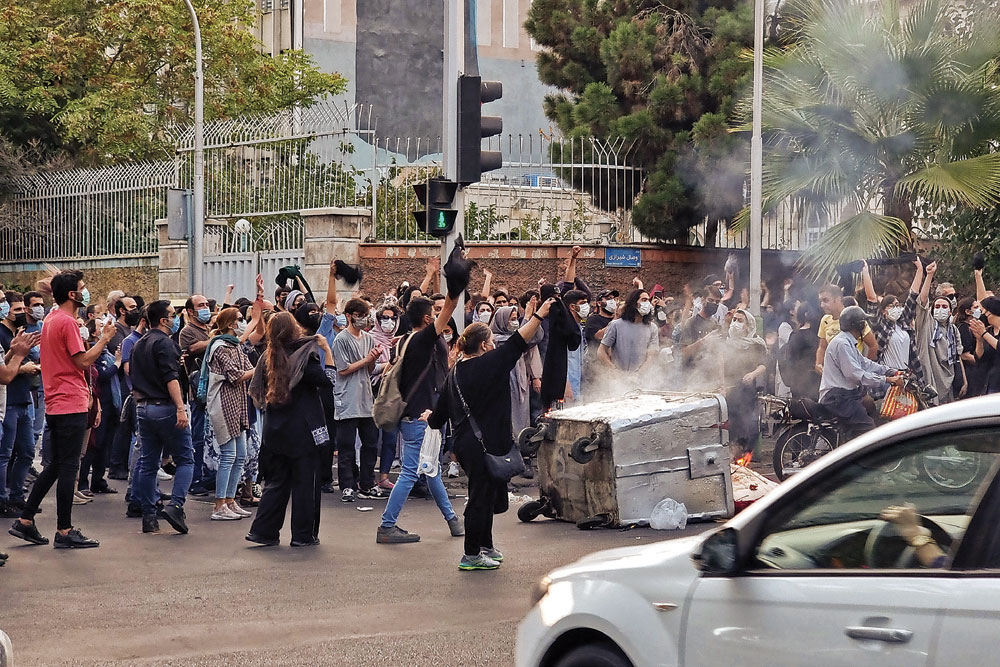 Protesters march to mark the death of Mahsa Amini on the streets of Tehran, September 19, 2022 (Photo: Getty Images)


IRAN HAS SEEN a fresh wave of nationwide protests af­ter a 22-year-old woman, Mahsa Amini, died in Tehran on September 16 in the custody of the morality police respon­sible for enforcing the ‘mandatory’ Islamic dress code. While police claimed that Amini succumbed to a heart attack, the young woman’s death triggered protests in her hometown Saghez in Kurdistan province, where she was laid to rest. In Tehran, protests snowballed quickly against compulsory hijab and the morality police before spreading to cities across the country. Apart from the chant of “Death to the Dictator” target­ing Supreme Leader Ali Khamenei, the highest religiopolitical power in Iran, protesters also raised the cry of jin-jiyan-azadi (women-life-freedom). The slogan, which has been associated with Kurdish women fighters in Iraq and Syria, is now co-opted into the Iranian women’s movement.

What distinguishes ongoing protests from previous episodic mobilisations against the mandatory hijab is their militant na­ture. The images of young women cutting off their hair in public squares, burning headscarves while standing on police cars and young men taking on the riot police indicate a radical energy ready to push back against the coercive arm of the state despite the risk of severe retribution. As protests continue into the second week, with dozens of lives lost and hundreds of people under ar­rest, Iran’s conservative President Ebrahim Raisi has denounced the defiance as unacceptable “acts of chaos”. Meanwhile, the reformist Etemad Melli party, currently outside the corridors of power, has urged the country’s parliament to scrap the hijab law and called on the president to do away with the morality police.


During the rule of modernising dicta­tors of the 20th century, such as Kemal Atatürk in Turkey and Reza Shah Pahlavi in Iran, who saw the secular state as a fundamental instrument for creation of a modern society, sartorial regulations were aimed at ridding citizens of outward symbols of religious identity. By the same token, among the dominant section of the ruling clergy in the Islamic Republic, the obligatory veiling of women is seen as the most visible marker of its Islamic identity. It is important to note that the Islamic Revolu­tion of 1979, which raised the slogan of azadi, istiqlal, Jomhouri- Islami (freedom, independence, Islamic Republic) politicised most sections of Iranian society, including women across classes. In addition to the university-going ‘modern’ women, devout women, inspired by Ayatollah Khomeini’s Islamic revolution­ary message, modelled themselves on Islamic female figures of Fatimah and Zainab and were at the forefront of mass demon­strations calling for the abolition of monarchy. Khomeini called chador the “flag of the revolution”. After initial failed attempts by the state to impose dress restrictions, mandatory hijab law was enacted only in 1983 in the bleak atmosphere of the Iran-Iraq war.

Over the decades, the zealousness with which the Islamic Re­public has enforced Islamic dressing has depended on the politi­cal faction in power. Under Mohammad Khatami, who won an overwhelming mandate for reforms in the 1997 presidential elec­tions, Iran saw a brief period of cultural openness, social freedoms, and a growing civil society. Women were allowed to wear loose overcoats called roo-poosh/manteau instead of head-to-toe chadors. This easing of restrictions encouraged women to test boundaries by wearing shape-revealing coats, hijab that revealed most of their hair and more makeup. In turn, these fashion changes gave rise to the term “bad hijabi”. Following Khatami’s failed outreach to the West and the Bush administration’s designation of Iran as part of the “axis-of-evil”, conservatives seized the opportunity to roll back what they saw as reformist excesses. For them, the emerging borderless world of satellite TV and internet made the Islamic Republic the target of a “soft war” (jang-e-narm), the exercise of an “insidious” influence by the West on young Iranians. Since 2005, the year hardliner President Mahmoud Ah­madinejad was elected, Guidance Patrol (Gasht-e-Ershad), also known as “morality police”, has been at the forefront of enforc­ing the “Islamic dress code”. The chador-clad female officers, accompanied by vans, are positioned at busy traffic checkpoints, subway stations, shopping districts, where they detain women sporting bad hijab. These detainees are then ferried to a so-called education centre, where they have to attend a mandatory lecture on hijab. Nevertheless, over the years, the bad hijabi style has become widespread among young women who were born in the 21st century global information society dominated by neoliberal cultural ethos of accentuated individualism and self-actualisation through consumerism. In other words, it has become increasing­ly difficult for the Islamic Republic to inculcate its ideological-po­litical subjectivity among its youth. In 2018, amid a renewed wave of protests against the hijab law and police crackdown, moderate Iranian President Hassan Rouhani released a report prepared by the Center for Strategic Studies—a research arm of the president’s office. A survey conducted as part of the report revealed that 49.2 per cent of the 1,167 respondents said that the government should not be allowed to dictate what women wear. While Rouhani may have been trying to cement his moderate-reformist constituency in the country’s polarised politics, the young and restless of Iran do not depend on a political party to demand what they consider as their basic right and freedom.

In 2016, anonymous software developers in Tehran released a mobile application called Gershad. The application allowed users to mark the location of the morality police on the city map with a bearded man’s icon, thus enabling others to stay clear of them. Though Gershad was quickly blocked by the authorities, it heralded the era of “digital protests”. Two years later, Masih Alinejad, an Iranian-American journalist, who has been self-exiled in Brooklyn, initiated the “My Stealthy Freedom” cam­paign on Facebook, where hundreds of young Iranian women shared photos of themselves posing without hijab on beaches, mountains and deserts. This virtual movement soon morphed into the “White Wednesdays” campaign, which started when a lone female demonstrator stood on a busy pavement in central Tehran waving her white headscarf tied to a stick.

As brave Iranian women now burn their hijab, many in the West are rushing to explain their defiant act as wilful burning of the symbol of state or even political Islam. But such reduction­ist narratives stem from their visceral dislike for the Islamic Republic and their own expectations for regime change, which are roused wildly every single time Iranians take to the street to voice their political or economic grievances. It is not hard to see that Iranian women demanding personal autonomy and legal equality do not need ‘leadership’ of the likes of Alinejad or the de­posed monarch’s son, who have opportunistically aligned their interests with American war hawks. If anything, Washington’s failed Iran policy of sanctions and war threats has played its part in furthering the political fortunes of hardliners at the expense of the reformists supporting the cause of social freedoms.

Iran’s youth have been reeling under an economy marred by decades of US sanctions, corruption and the pandemic. The attempts to tighten the noose on social freedoms and the state’s heavy-handedness have therefore invited an almost instant and massive pushback. Amid reports of violent clashes and crackdown across Iran, we hear that morality police stands withdrawn in Tehran and other cities and that the police are turning a blind eye to women without hijab. Only the future will tell whether it’s a tactical retreat by the state or a surrender forced by the protests, but what is beyond doubt is that the deci­sions of the Islamic Republic in the final analysis are informed by a primordial imperative of survival.

Deepika Saraswat
Deepika Saraswat is Associate Fellow at Manohar Parrikar Institute for Defense Studies and Analyses and the author of Between Survival and Status: The Counter-Hegemonic Geopolitics of Iran