Yet another disaster in geologically fragile Uttarakhand pits livelihoods against ecology 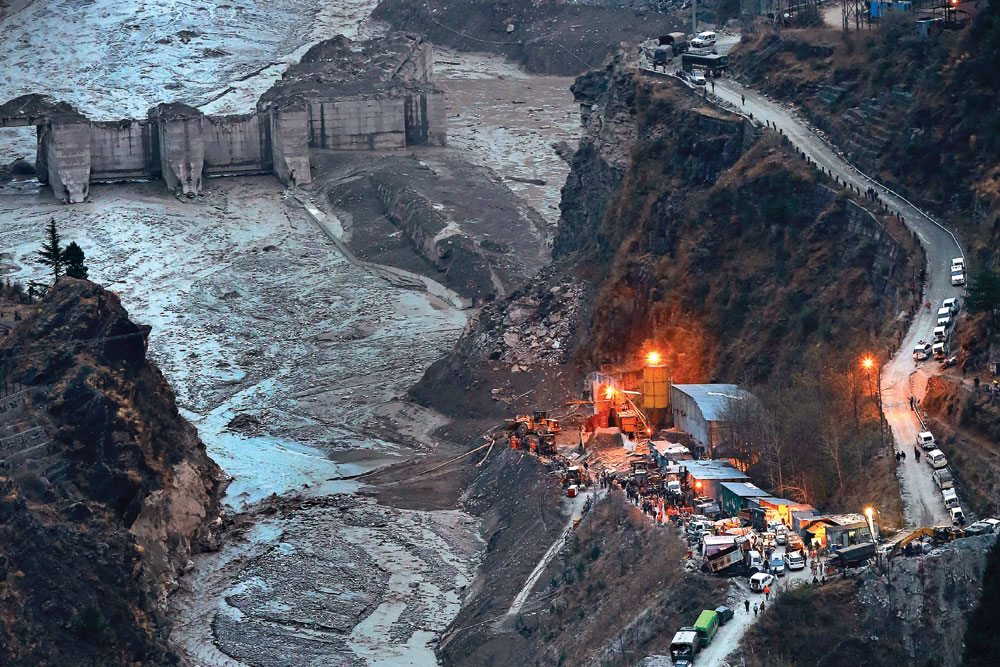 The barrage in Tapovan after a portion of the Nanda Devi glacier broke off, February 9 (Photo:AP)


It seemed like mist but when Shankar Singh Rana squinted and peered into the distance, he realised that it was moving too rapidly. More puzzlingly, it was a bright sunny day. The roaring reached his ears a mere split second after his survival instinct kicked in and the 42-year-old sarpanch of Raini village in Uttarakhand had taken to his heels. “We all ran towards the forest, as the flood came closer you could see the trees and the boulders. It didn’t seem likely that we would survive,” he tells Open. It lasted for a few seconds but Rana was very afraid that this was just the beginning. “We were untouched by the 2013 floods but I knew the scope for damage downstream was immense.” On the morning of February 7th, a few different factors, such as heavy snowfall a few days ago, a rock fall on a glacier and subsequent warm days, led to a flash flood in the Chamoli district of the hill state that at the last count has left 32 dead, 174 missing and led to the destruction of the Rishiganga power project and damage at the Tapovan power plant. Of the 174 missing, 34 are believed to be stuck in the 1.6-km-long tunnel at the Tapovan-Vishnugad hydel project. At a first glance, Rana’s fears were not unfounded. It could well have been a disaster on the scale of 2013.

There are those for whom the 2013 flashfloods of Uttarakhand are a vague footnote in the history of India’s natural disasters but even for them the image of the Kedarnath temple standing tall while everything around it was either drowned in a sea of debris or flattened completely remains an evocative one. Nearly 6,000 people died and several thousand are still missing, not to mention the livestock, including horses, washed away in the disaster that took place at the peak of the tourism season. The Indian Air Force (IAF), which worked tirelessly to evacuate the thousands who were stranded, lost a chopper in which 20 people (five from IAF, six from the Indo-Tibetan Border Police and nine from the National Disaster Response Force) lost their lives. Due to incessant rainfall in June 2013, the Chorbari lake, a glacial lake at the snout of the Chorbari glacier, saw its water level increase by almost 7 metres. A subsequent avalanche (common at that height) led to the dam bursting with the entire lake emptying out in a matter of minutes. The flood which resulted is one of the greatest natural calamities but its impact was exacerbated by human activities. Much like what happened on February 7th.


“We believe a rockfall occurred on accumulated snowfall deposited on the glacier. All of this happened in a steep slope region which led to an avalanche. As the weather turned warmer, the snow-rock mix thawed and this mix of debris and boulder came down at a very high speed,” explained Kalachand Sain, director of Dehradun’s Wadia Institute of Himalayan Geology. A team from the institute left a day after the floods to ascertain their cause and its report is awaited. Initial reports claimed that the February 7th flood was caused by a glacial lake outburst flood (GLOF). However, in spite of the fact that glacial lakes, formed when glaciers retreat due to rising temperatures, are increasing in Uttarakhand, there aren’t too many instances of GLOF. Scientists have said incidents like these are common in the higher ranges. When the ice or snow melts, it carries debris which can include boulders and rocks with it downstream. In remote areas, these do not cause much damage but the fury of nature becomes calamitous when it comes in contact with human carelessness.

Hydroelectric projects are ‘green’ only to the extent they avoid fossil fuels. A 2020 study investigated the impact of hydropower projects in Himachal Pradesh and found that construction work for the projects ended up modifying land use, damaging forest biodiversity and destabilising Himalayan ecosystems

Ever since the formation of Uttarakhand more than two decades ago, hydropower has been touted as one of the biggest sources of revenue for the state. At the time of the 2013 floods, nearly 70 hydroelectric power projects were envisaged, mostly high up in the mountain regions. A committee headed by Ravi Chopra, director of People’s Science Institute in Dehradun, had unequivocally stated after the 2013 floods that hydropower projects should not be built in the valleys of Uttarakhand. This has as much to do with the fragile ecological geology of the state as with current hydropower projects, such as Rishiganga and Tapovan. Electricity is generated in these projects by diverting rivers to pass through tunnels and turbines. Hydroelectric projects are ‘green’ only to the extent they avoid fossil fuels. A 2020 study in the journal Land Use Policy investigated the impact of hydropower projects in Himachal Pradesh and found that construction work for the projects ended up modifying land use, damaging forest biodiversity and destabilising Himalayan ecosystems. “There is a huge amount of deforestation involved when these projects are set up which leads to the top soil becoming loose. This leads to the slope becoming unstable and contributes to increase in landslides,” says activist Mallika Bhanot. One of the bigger concerns is that of muck disposal. The sites designated cannot handle the volume of muck and silt generated by hydropower projects. Quite a few projects simply dump these into the river. “This leads to the riverbed volume rising. If there is an avalanche in the upper reaches or a cloudburst or heavy rains during monsoons, this excessive water is coming on to an already raised riverbed,” says Bhanot. During the 2013 floods, large parts of Srinagar, a town in Pauri Garhwal, were submerged and the 2013 committee report cites those affected in Srinagar as saying that the improper disposal of muck generated by the hydroelectric project was largely responsible for raising the riverbed and flooding the lower reaches of the town. The Rishiganga project has also been afflicted by the issue of muck disposal. The 2013 report pulled no punches when it came to highlighting how the dams exacerbated the damage of what was already a deadly flood to begin with. When floodwaters break a barrage in a dam, the destructive potential of the water flowing downstream increases. For example, in 2013, Khiro Ganga, a small stream which meets the Alaknanda 1 km upstream of the Vishnu Prayag hydroelectric project, brought down a lot of debris which led to the destruction of the highway. More rocks and boulders were added to the roiling water which finally smashed the power project.

The 2013 Chopra committee had in its report recommended the scrapping of at least 24 hydropower projects. There have been efforts made over the years to revive at least six of these with even committees being formed that have sought to figure out a middle path. Now the calamity of February 7th might put an end to those efforts. But for the 2013 report, those six projects would be operational in the valley where the 2021 floods took place and increased the scale of devastation manifold. The villagers of Raini had filed a public interest litigation against the Rishiganga project in 2019 on environmental grounds following which the Uttarakhand High Court had asked the state government to form a team to look into the concerns of the villagers and ordered a stay on blasting in the project area. “Hydropower projects don’t directly cause the damage but they do compound the problem. In 2013 we did see larger dams act as a cushion causing the water to lose its velocity and sediment density but we have to marry ecology and research. As scientists we feel like failures when such incidents occur because while they are naturally occurring, they needn’t have been calamitous,” says geologist Pradeep Srivastava. Most hydropower projects in Uttarakhand are also planned at very short distances from each other which means that the river is flowing from one regulated channel to another, leaving it very little space to regenerate and revive.

“Locals are often caught between the carrot of employment and the stick of environmental degradation. We had reached a stage with this project where we were far more concerned with what was happening around us, to the valley than about daily wages. We were lucky that we weren’t impacted at all by what happened in 2013 but in the mountains you learn to be very fearful of nature. Today bridges have been washed away which have left villages in the higher reaches completely cut off,” says Raini sarpanch Rana.

The proliferation of hydroelectric power projects alone wouldn’t have been the cause of much concern if it wasn’t for the additional factors of the state’s fragile geology and the influx of tourists. According to a 2016 report submitted by then Minister of State for Science and Technology & Earth Sciences YS Chowdary, Uttarakhand has the highest number of unstable zones among north Himalayan states. “The state is vulnerable from many points of view. For instance, it is due for a big earthquake. We can map the strain but we can’t pinpoint the exact location where it will be released. Then there is the issue of relief vis-à-vis the mountains. The valleys are narrow, the slopes are unstable and heavy rainfalls leads to landslides. And now with global warming, we have the threat of glacial lakes increasing in size,” says Wadia Institute’s Sain, explaining why Uttarakhand remains particularly vulnerable to natural calamities. The Himalayas are a young mountain range which continues to grow.

Adding to all of this is the pressure posed by religious tourism. As home to some of Hinduism’s most venerated shrines as well as the origin point of the Ganga, Uttarakhand has long relied on religious tourism for economic growth. This has led to rampant illegal construction on not just riversides through the state but even on riverbeds. In 2013, three-four storied ‘hotels’ were seen crumbling like a pack of cards into a rapidly swelling river across cities such as Rudraprayag and Haridwar. The state is now seeing the construction of one of its most ambitious infrastructure projects, the Char Dham project, which has come under criticism for its alleged environmental cost on the state.

Unregulated construction which leads to the stripping of forests, thereby directly contributing to the destabilising of slopes, remains an ongoing concern. The threat of climate change now only makes the problem worse. More and more scientists are speaking up about the need for a centre for glaciology as lakes increase in size. Glacial lakes are a concern not just in Uttarakhand but across the Himalayan region.

“We don’t know how much of an impact environmental impact assesment reports have before a project is given the greenlight. Even today we haven’t learnt lessons from 2013. Why aren’t snowfall levels monitored extensively? Hard decisions need to be taken if lives have to be saved,” says activist and water expert Himanshu Thakkar.

“We are refusing to learn the lessons that nature is teaching us. The fact is that there is a very powerful lobby of players and basically the lessons we learnt from 2013 are all gone. The only solution we have as of now is that unless there is personal accountability of both the sanctioning and executive officer [for the projects], this will keep happening,” Chopra says.