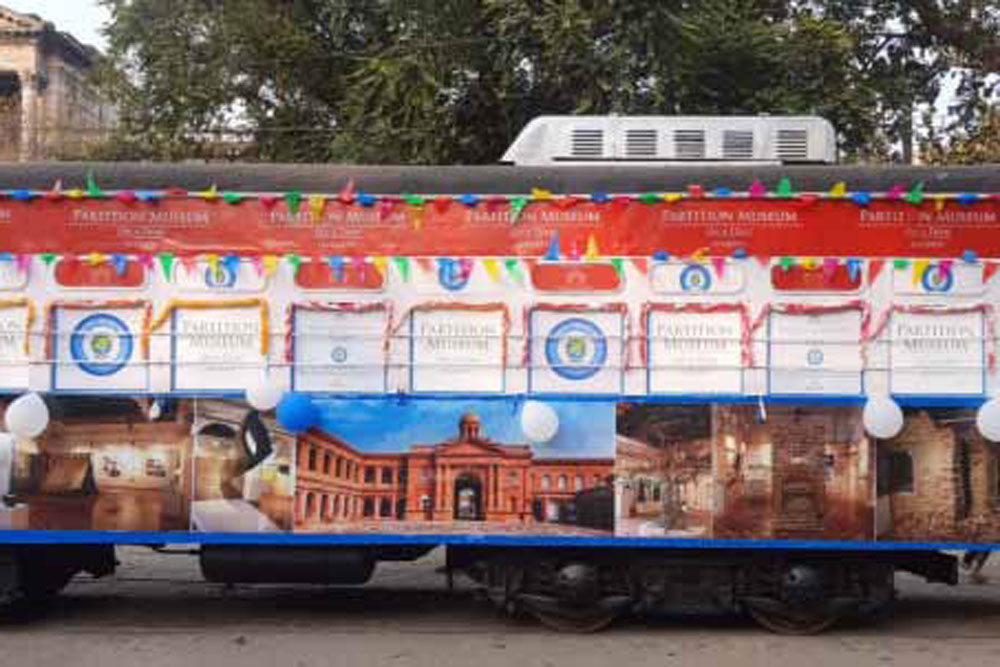 Partition Museum on Wheels in Kolkata


A tram isn’t the most obvious space for a museum, but the recently inaugurated museum commemorating the 74th anniversary of India’s Independence, in Kolkata is located in one. The mobile museum is on display at Esplanade from August 15th till December-end. This is not the first time that an Indian museum has moved away from the conventional bricks and mortar, gallery and glass case format. The concept of the museum as a space where historical artefacts are displayed has undergone a recent shift and the relationship between the exhibit and the viewer is now open to reinterpretations. “The idea and setting of the museum space are not as rigid as they had been earlier,” says Kishwar Desai, author and chairperson of The Arts & Cultural Heritage Trust, which started the Partition Museum project. With the arrival of many new museums, and changes in older ones, it is apparent that these institutions are evolving, raising the question of why this is happening.

Nowadays, says Joyoti Roy, head of Strategy and Planning at Mumbai’s iconic Chhatrapati Shivaji Maharaj Vastu Sangrahalaya (CSVMS), “The area of curation itself is undergoing a change. Debates are taking place in the academic space on the fact that India has largely inherited its museums from its colonial history.” There is a growing awareness among the older and more established museums that they must expand their outreach to contemporary audiences. “Old objects are used to tell new stories in new ways,” adds Roy.

Today, museums look for innovative ways of displaying exhibits and objects with the aid of the latest technology and often place as much emphasis on the presentation of the exhibit as the exhibit itself. However, historian and author Dr Himanshu Prabha Ray cautions, “The content must match the new ways in which the information and histories are being displayed. People sometimes get so taken in by the technology and the displays, and organisers so preoccupied with the presentation, that the exhibits themselves could be lacking in content.” To appeal to a wide as well as a more discerning audience, she says, both criteria must be met. This struggle, part of the tension between the needs of presenting a display that can appeal to a wider audience and one that satisfies the cerebral viewer, has always existed. However, many museums are increasingly attempting to strike a balance.

New Indian museums include the upcoming Prime Ministers’ Museum being set up by The Nehru Memorial Museum & Library in New Delhi, which will showcase the lives of all Indian prime ministers. Another upcoming museum is the National Maritime Heritage Complex in Lothal, Gujarat, undertaken by the Ministry of Ports and Shipping, which is an ambitious attempt to showcase the country’s maritime heritage. Other Indian maritime museums exist (for example in Kochi), but this is the first to look at the country’s maritime history as a whole. Set to launch in 2023, 14 galleries are planned, including one where the latest digital technology will be used to demonstrate old shipbuilding techniques in India. Vasant Shinde, archaeologist and project advisor, discloses there are plans for a theme park, and they are in the process of asking the Navy for permission to display old Indian warships in the complex. “The architect has been requested to design spacious galleries so there will be more flexible ways of arranging and rearranging the objects on display,” says Shinde. The museum, on the cards since 2014, was given government support, but the site took some time to finalise. Lothal is an appropriate venue as it was the site of the first dockyard in India. It is surprising that a peninsula country with a coastline of over 7,500 km and a strong Navy, took this long to have a national maritime museum.


Another new area museums are increasingly exploring is lived experiences. Desai had launched the Partition Museum in Amritsar in 2017, using the venue of the then decrepit Town Hall as a backdrop for the oral histories, artefacts and other memorabilia which are testaments to this event. “These are museums for and of the people, as we are telling stories of ordinary people who lived through this event,” says Desai. The Trust’s next venture will be found at the Dara Shikoh Library, the site of Delhi’s Partition Museum slated to open next year. Like the Amritsar and Kolkata sites, it will be an interactive experience. The objective is to find ways of making exhibits more accessible. The tram, for instance, was the brainchild of IAS officer and MD of the West Bengal Transport Corporation, Rajanvir Singh Kapur. “We felt the tram is such an iconic symbol of Kolkata’s identity and could make the museum more accessible,” Desai explains.

But while bringing history to the people is important, there can be pitfalls. Museum consultant to the Maharaja Sawai Man Singh II Museum Trust, Mrinalini Venkateswaran cautions that museums are a medium of making people look at history in a certain way. “Museums are a political arena, so the political context will always be relevant. With the rise of private museums, individuals are voicing a greater say in an institution that has long been perceived as primarily ‘official’ or ‘establishment.’”

Museums have thus become the subject of rigorous debate. Kavita Singh, art historian and professor at The School of Arts and Aesthetics, Jawaharlal Nehru University, explains, “Museums are contested spaces because histories and cultural identities are contested, particularly when they become interested in history or in rewriting it. You either have people protesting about the museum’s narrative, or if they are now in control, they try to alter the museum’s narrative.”

It seems after many decades of comparative calm, museums are the location of dynamic debates, which have served to highlight the significance of such spaces in the public’s consciousness. In Singh’s view, though we may imagine objects in a museum provide objective undeniable facts, the museum will always be an ideological space. “What museums show and how they show it affects their narrative and this has always been ideologically governed. When you have strong moves to shift ideologies or interpretations or shift the idea of what is our ‘true history’ or our ‘true values,’ then the museum becomes a space of interest,” she adds. Singh elaborates that the control of the museum for ideological purposes is a part of museum histories.

Venkateswaran says the changes in the museum as an institution have been evolving for decades. “It was very much a part of the international post-war movement. In some ways in India, we possibly hit a sort of slump in the ’60s and ’70s.” Most Indian museums are in the public sector and there were many bureaucratic procedures which people had to struggle against. She adds that efforts such as the Conflictorium in Ahmedabad and the Kiran Nadar Museum of Art, which successfully showcase creative spaces, are possible as they are private ventures with more autonomy and flexibility.

However, things have been looking up across public and private museums. Covid 19 accelerated the realisation of the advantages of the virtual space. Although, as Venkateswaran says, there will always be the physical space and what one may call the ‘old-fashioned way’ of viewing objects and listening to a tour guide. “Many ways of experiencing museums can coexist.”

One project majorly in the physical as well the virtual space is the Museum of Art & Photography (MAP) in Bengaluru, a private venture founded by Abhishek Poddar, launched digitally last December. Says Kamini Sawhney, MAP director, “The two pillars of MAP are its emphasis on accessibility and inclusion.” The digital launch brought the museum to everyone free of cost, yet Sawhney also concedes that the physical space will always be required. Indeed, the MAP building was designed to also ensure access to specially-abled people. Along with sections for folk, contemporary, pre and post-modern art, MAP has extensive space devoted to popular culture, including Bollywood posters. “We don’t look at objects in isolation. We want to collapse borders between high art and low art, and discuss how these categories were decided. Our efforts to try and collapse international borders can be seen in our collaborations with museums abroad,” says Sawhney.

Museums also have to respond to greater public expectations after more museum-goers have been exposed to museums abroad. The enthusiastic global response to the Bihar Museum Biennale this April is testament to this recent awareness. Sawhney points out the shift had already been underway. “The digital world has changed the relationship between people and sources of knowledge, while it obviously can never reach the level of scholarship and research found at a museum.” The concepts on which museums are based in India are also changing. Traditionally, you had the historians and curators presenting viewpoints, which could be a historical narrative, or an object-specific narrative. Increasingly, that itself is being critically evaluated. There are now museums, where viewers can have a more interactive experience, and in that sense museums can belong to the community. For instance, the CSMVS Children’s Museum is curated with help from children. Roy says these trends have become more apparent over the past decade. “It’s also to match with an audience who are more socially and politically aware and more connected to each other and the world due to social media and mass media.”

There is a recognition that museums need to be entertaining and to actively appeal to a wide public base. Says Shinde, “There has also been more demand from the government to develop heritage sites, and museums are a large part of that. It’s also part of a national effort where all national museums are getting an upgrade. There is also recognition that these efforts, along with new ways to engage with audiences, with more collaboration between public and private institutions, will attract more viewers.”

Museums today are spaces subject to many conflicting tugs of war. There is the question of whether they should appeal to a mass audience or engage more critical viewers; whether they should keep up with the most innovative displays or stay austerely classical. They are therefore inevitably arenas where the competing narratives of ongoing history and culture wars are staking their claims.