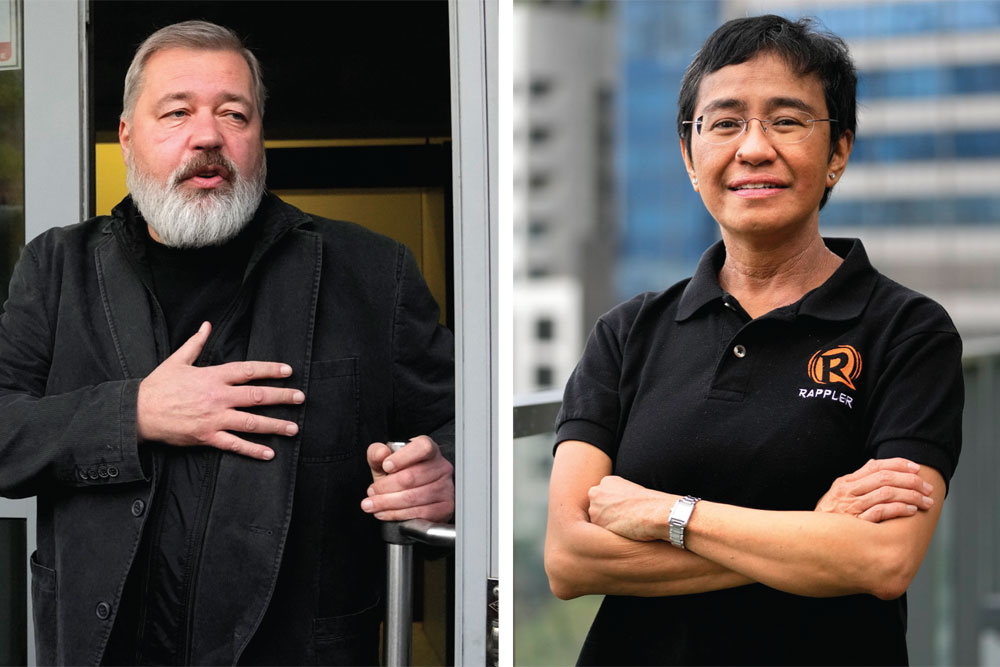 
THE NOBEL PEACE Prize for Maria Ressa of the Philippines and Dmitry Muratov of Russia this year is both well-deserved and unusual at the same time. It is unusual because this is the first Nobel Prize for journalism, and well-deserved as the Philippines and Russia are exceptionally difficult countries for journalists to work in. Both countries are marked by absence of political and civil rights and cannot be described as democracies in any sense of the term. The 2021 Freedom House score for the Philippines is 56, and 20 for Russia. In contrast, Denmark—the country held as the ultimate destination of civil and political rights—has a score of 97, one of the highest in the world. It takes an extraordinary level of commitment, personal courage and honesty for journalists to work in such an environment.

The Nobel committee summed this up very well when it said, “Ms Ressa and Mr Muratov are receiving the Peace Prize for their courageous fight for freedom of expression in the Philippines and Russia. At the same time, they are representatives of all journalists who stand up for this ideal in a world in which democracy and freedom of the press face increasingly adverse conditions.”

While both laureates have toiled under adverse conditions, the award to Muratov is especially noteworthy as Russia presents an exceptionally hostile environment for journalism to the point that the quest for facts often turns into taking political sides. In any democracy, polarisation of opinion, fake news, partisan reporting and other distortions in the press are disagreeable features that are present in some form or the other. But it is in Russia that the soil is uniquely ranged against even normal journalistic practices, such as unearthing facts and asking difficult questions. In that sense, Muratov’s newspaper Novaya Gazeta stands out as an independent but non-partisan organ. In his comments after receiving the news of the award, Muratov said the prize was not just for him and his paper but also for journalists like Anna Politkovskaya (1958-2006) who was murdered in the line of work.

The committee also said, “Free, independent and fact-based journalism serves to protect against abuse of power, lies and war propaganda. The Norwegian Nobel Committee is convinced that freedom of expression and freedom of information help to ensure an informed public. These rights are crucial prerequisites for democracy and protect against war and conflict. The award of the Nobel Peace Prize to Maria Ressa and Dmitry Muratov is intended to underscore the importance of protecting and defending these fundamental rights.”

It is one thing to celebrate the achievements of these intrepid journalists, but something entirely different for an award to be a silent bearer of ideology. The two journalists have been given the prize not for the resolution and/or prevention of some conflict that poses a threat to world peace, the classic reason for bestowing the prize. Alfred Nobel’s will stated that one part of the prize money should go to “the person who has done the most or best to advance fellowship among nations, the abolition or reduction of standing armies, and the establishment and promotion of peace congresses.”

One does not have to be critical of any “deviation” from the stated purpose of the prize given the large variety of situations that involve the cause of peace. But in the last two decades, the prize has especially been rather unusual. In 2009, Barack Obama was given the prize less than a year after he was elected US president. Far from resolving any of the pressing problems that his country confronted, one can argue that matters turned out for the worse under his watch. The Syrian conflict went from bad to worse and the Israel-Palestine issue went nowhere closer to resolution, to cite just two problems. But such was the agony of the George W Bush years that the prize could be dished out for almost nothing!

In the pantheon of the prizes, one can draw an ideological gradient if one leaves out the prizes for Physics, Chemistry and Physiology or Medicine. Of the remaining prizes, the Bank of Sweden Prize for Economic Sciences (the Economics Nobel) is the least ideological. Then there is the prize for literature and finally, the peace prize. This ascending ideological order is directly proportional to the latitude in awarding the prize. Of the three—economics, literature and peace—the peace prize is the most ideological in its flavour: from Henry Kissinger to Kailash Satyarthi, anyone can be given the prize depending on the exigencies of the time. This is not to belittle the prize but to question its very often contingent—and ideological—flavour.

From that vantage, the prize to the two journalists was not in response to some global conflict situation. To be sure, Russia is involved in some conflicts (Syria, for example) but it poses no threat to world peace, nor does the Philippines pose any such problem. In that sense, the prize this year is a large deviation from its purpose.

Instead, one could argue that “democratic backsliding”—an expression that is so wide in its amplitude that it could be used to imply anything that is not acceptable—is now held to be a more pressing problem than the dozens of conflicts that rage in Africa, the Middle East and the far more menacing Great Power competition in which China threatens the world order. One could—with even more latitude—argue that “less” democracy means a more dangerous world. There is something of a statistical regularity that non-democracies are more likely than democracies to attack other countries and, in general, indulge in bad external behaviour. But even from this rather wide consideration, Russia and the Philippines are hardly your candidates for democracy or even countries experiencing democratic backsliding. The prize’s real import lies in its signalling value to existing democracies to behave.

One does not have to dwell on conspiracy theories or even say they exist. The issue is simply one of telling them what is acceptable and what is not. The Freedom House report, the V-Dem Institute report and now, implicitly, the Nobel Peace Prize are all signals to highlight the issue of democratic backsliding.

In the long wave of democratisation that began after 1991, 2021 indeed marks a low ebb. In many countries that adopted democracy, public support for it has muted greatly. Hungary and Poland are good examples. In others, strongmen have ensured that democracy went nowhere. Rwanda is the prime example. But these are countries where the champions of liberal democracy can do nothing: the soil is simply not receptive. Most of the attention is, however, reserved for countries that are undoubtedly democratic, but that do not want to be mirror images of what the ideologues of democracy want them to be. It is against these countries that the ideological armaments have been trained.

The Nobel Peace Prize this year ought to be celebrated for the grit, willpower and courage of the laureates. They are indeed an inspiration for journalists everywhere. But that is only one part of the story of the prize. The ideological message of the prize is at odds with what is truly celebratory about it.