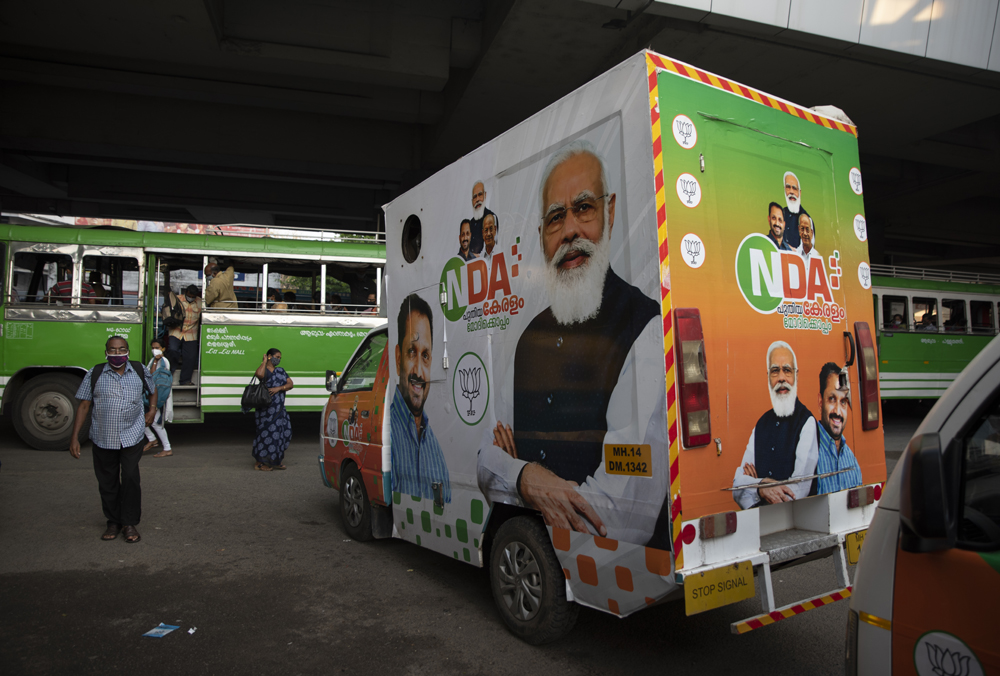 
Having watched the 2020 elections in the US, known for its mature democracy with established conventions, many democracies may have been tempted to follow the ways of the oldest democracy. Kerala may have already followed the American model in spirit, if not in letter, in the current election process. Religion as a factor, unreliability of pre-poll surveys, distrust of the electoral system and postal ballots, open invitations for deals, possibility of Me-Too complaints in the wake of young women entering the fray and likely rejection of the results by the loser come to mind in this context.

Religion has always been a dominant factor in the US elections. Donald Trump was banking on the Bible belt, the white supremacists and Hindu Indian Americans to retain his presidency. Kerala had no shortage of religions and castes in the elections, as we always voted our castes, not cast our votes. But this time, religion was brought to the centre of the elections. The first religious symbol to figure in the campaign was Hagia Sophia, a museum in Turkey which was turned into a mosque. The leftists benefitted from the new concern of the Christians, who voted for the leftists to save their faith during the local elections a few months ago. The Christian leaders openly bargained with all parties to test what they can get from each, but kept mum as to which side will receive their favours.

Then the Sabarimala issue was revived after an apology by a minister, who was part of the problem in 2018, to avoid a backlash in the 2021 elections. The hardcore leadership of his party held that no apology was necessary as the policy adopted was to implement the decision of the Supreme Court. Provoked by such a stand, the defenders of the faith brought the issue to the fore. As the state went to the polls, Sabarimala became the burning issue, making the incumbent party nervous. Karl Marx must have turned in his grave when he heard the remaining Marxists in the world claiming that all the gods, goddesses and angels were on their side and that if the gods had votes, they would have voted for the Marxists. Moreover, all parties moved on to the side of the believers as the atheists are a small minority.

Like in the US elections in 2016, the pre-poll surveys were unanimously in favour of continuity rather than change. The explanation was that the multitudinous charges made by the opposition of corruption, smuggling of gold, gross nepotism and others did not hurt the teflon image of the ruling party, which had dealt with the pandemic effectively and provided plenty of freebies to the people to keep them out of poverty and hunger. This made the opposition frustrated and made it make allegations of possible misuse of voting machines, voters’ lists, postal ballots, hinting, as Trump did in 2020, that the election results would be challenged. The threat of violence is very much there if there is no clear majority for either side on May 2nd. Lawsuits in different courts may be the result of frustration and if that happens after this election, we shall be in the same category as the US, which cannot run an election properly. The seriousness of the challenge of the system will depend on the closeness between the number of seats won by each party.

Big money in elections is a curse to democracy everywhere and the differences are only in a matter of scale. Kerala, this time, has far exceeded the previous records. Deals are in the air everywhere because of the emergence of triangular contests as two candidates can join together to defeat the third. Ideology is not a deterrent as coalitions are composed of different parties in different states. The bitter enemies in Kerala, Congress and the communists, are jointly fighting a fierce battle against the Bharatiya Janata Party (BJP), while BJP is open to any deal in Kerala. This was disclosed by a central BJP leader when he was denied a seat in his native Kerala.

The most alarming claim made by a party is that it can form a government if it obtained 35 of the 140 seats in the Assembly. This bewildering arithmetic was a loud proclamation of the biggest purchase offer of legislators announced at any time in history. Imagine a party doubling the number of its seats by buying seats. There could not be a more open offer of horse trading. Another party leader made what appeared to be a reasonable offer. He said that in one constituency, the leftist party had no chance of victory and so the leftists should vote for his party so that they can beat BJP together. If this principle is applied universally, there will be no triangular contests at all!

There was considerable consternation in India when the American think-tank, Freedom House, downgraded India as a ‘partly free democracy’ for the first time and declared India as an electoral autocracy. But nobody asked what kind of a democracy was the US if foreign powers could interfere in its electoral process and a president in office could challenge the outcome of the election even after every court in the country had declared the elections free and fair. After witnessing the bizarre manner in which the elections were held in Kerala, we could easily consider ourselves equal to the US in electoral improprieties. What remains to be seen is whether there will be an armed insurrection in the Assembly hall or the Raj Bhavan in Thiruvananthapuram to prevent an orderly transfer of power on May 2nd. Some of the politicians who broke the furniture and equipment in the Assembly hall recently to prevent a finance minister are still around. If they follow the American model in the present case, we can pride ourselves as a mature democracy.

In the meantime, the fortunes of Kerala are locked up in electronic voting machines, which are not beyond reproach, under tight security, which is also suspect. The disappearance of blaring loudspeakers from the streets has given some respite to the ears. Speculators and commentators are enjoying some well-earned rest while the candidates and parties are building castles in the air.