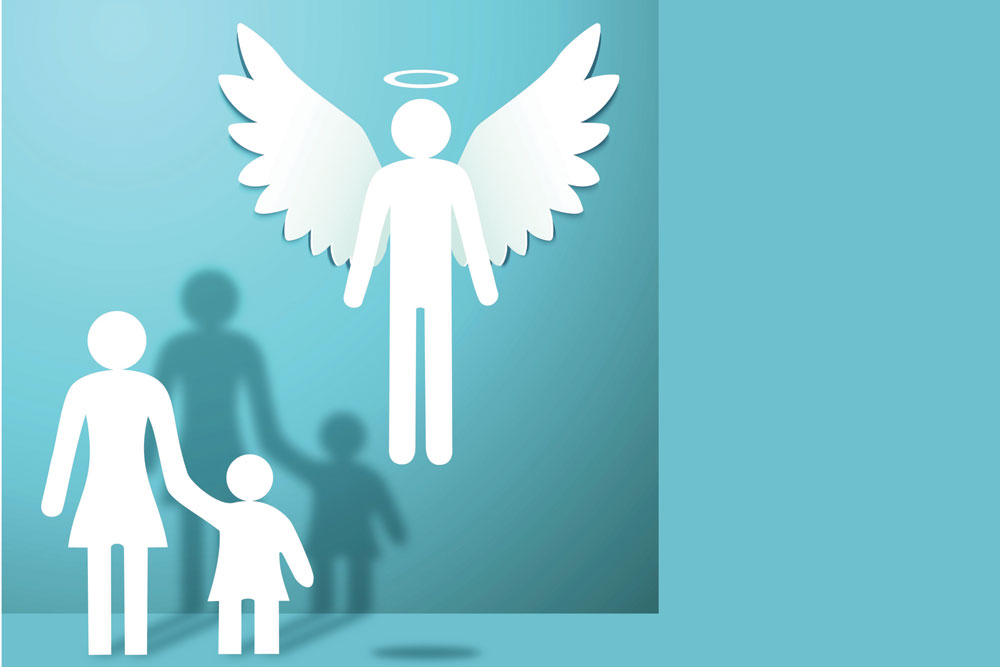 HE WAS A PHYSICAL education teacher, so healthy, so fit, it was really sad what happened,” Dr Nayana Patel chokes up as she talks about one half of a couple who came to her for fertility treatment some time last year. The husband succumbed to Covid in April during the second wave. What would have been a tragic family story, however, became news when the wife, during her husband’s illness which had rendered him comatose, sought permission to have his sperm extracted. The hospital refused the request following which the woman and her in-laws approached the Gujarat High Court. An emergency hearing was scheduled, and permission granted. The sperm was retrieved and stored. A few days later, the man passed away. The woman is now hoping for a pregnancy from the preserved sperm.

Posthumous conception, where a child is conceived after the death of a partner, is not a common occurrence but by no means unheard of. Over the past decade or so, every year threw up at least one such instance where a partner, usually a woman, had sought the use of her husband’s sperm—after an untimely death—to conceive a child. In most cases, the couple was already undergoing IVF treatment and semen samples from the male were cryo-preserved. But there are also instances where the man has met an untimely death and the partner has requested sperm removal from the body. In 2016, doctors at the All India Institute of Medical Sciences (AIIMS) revealed in an academic paper that they were “recently” faced with a “polite request” by the wife of a deceased for sperm retrieval. “After an hour of discussion among various consultants, it was decided that the request could not be accepted as the institute does not have any protocol in hand about sperm retrieval from a deceased person. Therefore, we denied her request,” began the paper. Even five years down the line, there is no clear guideline on sperm retrieval from a brain dead or deceased person, and hence the Gujarat-based woman’s trip to the court.

“There are no legal guidelines yet [on Post Mortem Sperm Retrieval, PMSR] and as such doctors are at a loss when faced with such a request. We don’t have immediate consent; we don’t know what the relationship between the two was like. During fertility treatment, we counsel the couple, we know what their dynamic is like, but all of this is an unknown in the case of PMSR,” says Dr Ranjana Sharma, senior consultant obstetrician and gynaecologist at Apollo Indraprastha Hospital, New Delhi.

It was in 2006 that Rajesh Bardale and PG Dixit, then with the department of forensics at the Government Medical College in Nagpur, had written a paper on the ethical questions of posthumous sperm retrieval in India, based on examples of similar requests in other countries. “There are guidelines in India for assisted reproductive technology, but not specifically for posthumous-assisted reproduction,” the paper had said. At that point of time, there were no known requests in the public sphere for such retrieval, but much has changed since. 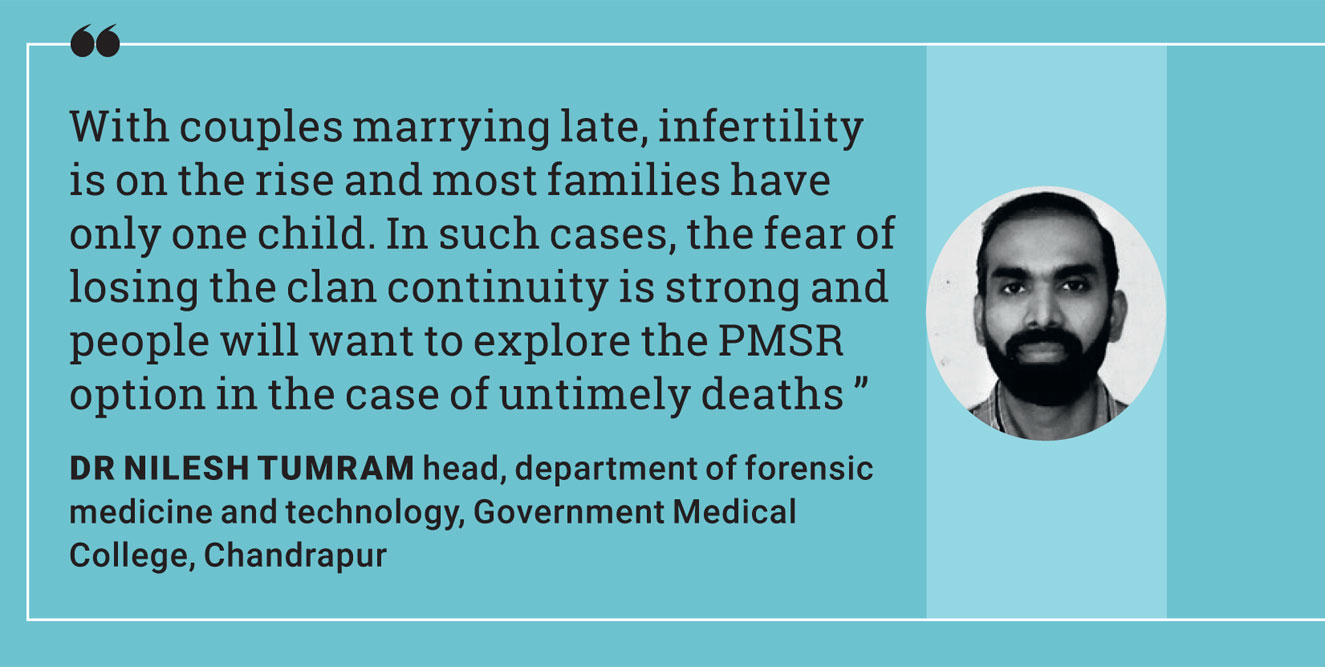 India still does not have any clear guidelines on this issue. The pending Assisted Reproductive Technology (Regulation) Bill (ART Bill), 2020, does state that “clinics and banks shall not cryo-preserve any human embryo or gamete without specific instructions and consent in writing from all parties seeking assisted reproductive technology in case of death or incapacity of any of the parties.” Basically, unless there is written consent from either of the parties, gametes cannot be cryo-preserved. In 2018, there was a news report of a Pune couple who had been blessed with twins, conceived from the frozen semen of their deceased son. The semen had been obtained two years ago in 2016 with the consent of the son who was undergoing chemotherapy for brain tumour.

But one must take into consideration that it is extremely rare for a healthy, young individual to anticipate their own death and make provisions for use of their gametes in the case of such an eventuality. The standing committee to whom the pending ART Bill was recommended also raised the issue. “The question of posthumous collection of gametes will arise mostly in situations of sudden death where no prior gamete retrieval has been performed. It is very unlikely that the deceased person would have provided any written consent. In such cases, inferred consent may be ascertained from the surviving partner of the deceased.”

The first reported PMSR took place in 1980 in the US, though the first announced pregnancy arising from such a case was only reported in 1998. Different countries have different legislation on this issue, with most prohibiting it outright. But countries like Israel even allow for parents to make such a request. In Australia, different states have different legislation and there have been a few instances where a partner has made such a request.

The actual medical process of sperm retrieval from a deceased person is a straightforward procedure which involves a non-invasive biopsy to extract testicular tissue. This is then frozen, and the sperm harvested from it. “The key issue here, biologically, is the timeframe. Ideally, the tissue should be extracted within six to twelve hours of death. The maximum it can go up to, in a tropical country like ours, is twenty-four hours,” says Dr Nilesh Tumram, head, department of forensic medicine and technology, Government Medical College, Chandrapur. Tumram has studied this issue extensively and written papers on the legal, medical and ethical issues surrounding PMSR.

EXPERTS WORRY ABOUT the ethics of extracting sperm from a dead man rather than the absence of any legal guideline. Consent of the individual and the reproductive rights of men are international concerns but given India’s social structure, a few more get tagged. “Married women in India are under tremendous pressure to prove their fertility. This is compounded by the pressure to give birth to a male child. When a newly bereaved woman wants her husband’s sperm preserved, we have to ask questions that go to the heart of the patriarchal nature of our society and the agency of the woman,” says bioethicist, Dr Amar Jesani. In the case of an accidental death, the decision for organ donation of the deceased can rest with the next of kin. PMSR could be seen through a similar lens—though, technically, sperm is not classified as an organ—with the next of kin taking a decision. “But the question to ponder here is just whose desire it is to have a progeny of the deceased,” says Jesani.

A young wife can be emotionally distressed at the loss of a partner and as such make the request, but would she eventually want to go through it in the next couple of months or even a few years? There are also ethical considerations about the child’s future. Often, a woman who may not be financially independent may seek out such a route because a child could secure her right to share in the husband’s inheritance. And if the parents of the deceased refuse to recognise the child as such, what happens to the child’s future? A few years ago, Dr Nayana Patel was visited by a young woman and her mother. The woman wanted a PMSR of her late husband’s frozen semen. “During the course of our conversation, she told me that her in-laws did not want the child. In such a scenario, I told her to seek legal recourse, but she never came back,” says Patel. Last year, the Calcutta High Court ruled that only the wife has rights over a deceased partner’s frozen semen after the parents of one such man approached the court, seeking access to the son’s semen frozen in a Delhi bank. The father of the deceased had moved the court as the daughter-in-law had refused to give them the nod to use the sperm. The court ruled that the only other person, apart from the deceased, who had a right over the frozen sample, was the wife.

In most Indian families, biological determination forms the basis of a family rather than social relationships. That explains why Dr Jesani cautions against a widow’s desire to be pregnant via posthumous conception in case she decided to remarry. “There needs to be adequate counselling. It is entirely a woman’s decision as to whose child she wants to carry, but sometimes there can be invisible emotional and societal pressures.” In the recent case, for instance, Dr Patel admits that the woman was very apprehensive about becoming pregnant, consumed by the fear of societal disapproval. But she eventually made up her mind to go ahead with the pregnancy. The conception hasn’t occurred as of now.

The need of the hour, according to Dr Tumram, is urgent legislation on this subject as he foresees more such cases coming up. “With couples marrying late, infertility is on the rise and most families have only one child. In such cases, the fear of losing the clan continuity is strong and people will want to explore this [PMSR] option in the case of untimely deaths. Doctors cannot take this decision on their own owing to competing interests of the partner and in-laws. The outside time limit of 24 hours further adds to the pressure.”

The new ART Bill may or may not end up addressing the issue, but the ethical concerns about this practice will continue to linger for some time.