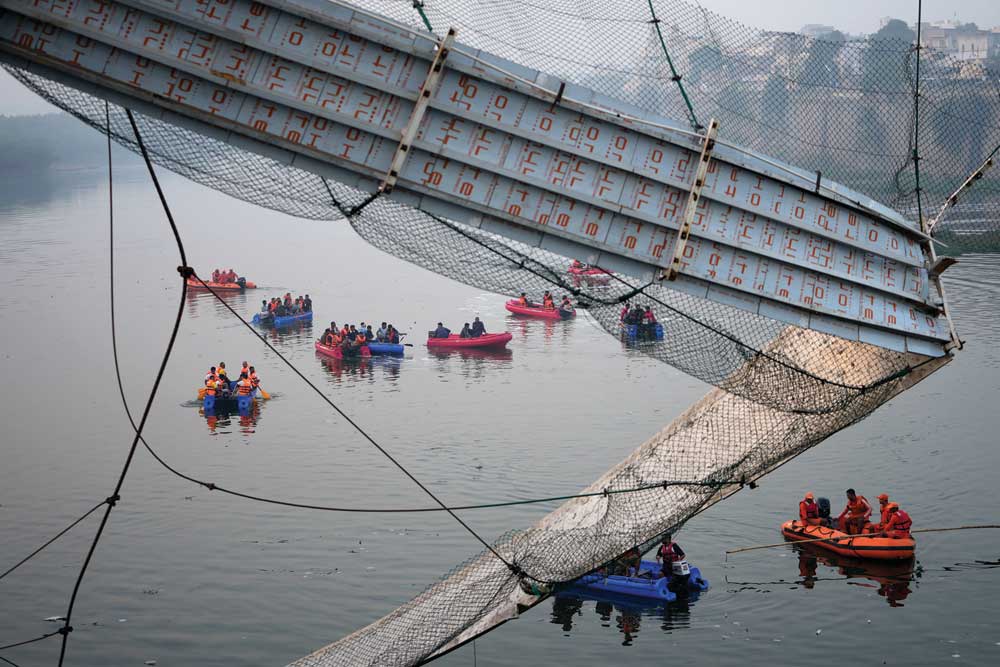 Rescuers on the Machchhu river search for victims under the collapsed suspension bridge in Morbi, Gujarat, October 31, 2022 (Photo: AP)


THE UNANSWERED MOBILE phones that fell silent confirmed the worst fears of frantic relatives calling their kin as news of the collapse of a popular cable bridge in the Gujarat town of Morbi spread on the evening of October 30. Many rushed to the site of the disaster in the evening gloom, seeking news of those who had gone missing. The thick algae on the Machchhu river obscured the surface waters and hindered rescue efforts amid rising despair as people shouted in the darkness for a response from those stricken by the tragedy. In the days that followed, it was apparent that the incident had taken a terrible toll with 135 dead, including dozens of children.

Videos of the bridge just prior to its collapse show that it was crowded, with some people who seemed to be tugging at the cables. While some questioned the actions of this group, others said it was a common sight on what was often referred to as the “jhulta pul”. It seemed quite evident that there were far too many people on a narrow bridge that had just been reopened to the public after being renovated over several months by Oreva, a Gujarat-based company that had the contract for maintaining the bridge. Some eyewitness accounts said that survivors clung to shrubs and managed to save themselves as the disaster unfolded. The reasons why the Morbi municipality had given Oreva, a manufacturer of the well-known Ajanta clocks, e-bikes and CFL bulbs, the maintenance contract for the bridge is unclear and could be clarified by the Special Investigation Team (SIT) inquiry ordered by the Gujarat government. As of now, the Morbi police have registered an FIR against “unknown” persons and arrested nine people, including two Oreva employees. The police said more arrests would be made as the investigation progressed.

The obvious failures in managing the flow onto the bridge, the entry to which is ticketed, have raised demands for greater accountability from the local administration. Coming as it did in the run-up to the Gujarat election due in December, the incident was a setback to the ruling Bharatiya Janata Party (BJP) which has sought to project itself as an efficient and responsive government. It did not take time for politics to surface with newly elected Congress President Mallikarjun Kharge demanding an inquiry by a retired Supreme Court judge. “Why were so many people allowed onto the bridge?” he asked. The Aam Aadmi Party (AAP), which has had a running battle with the Centre over several corruption cases filed against its leaders, quickly demanded the resignation of Gujarat Chief Minister Bhupendra Patel. “The Morbi bridge collapse in Gujarat was a result of massive corruption. Prayed for those who lost their lives in the incident. The CM has no moral ground to continue on the post,” said Delhi Chief Minister Arvind Kejriwal. The political blame game can be expected to be fierce, but the electoral fallout might be limited as the incident may not much alter the mood in the Morbi region where the demographics make some of the Assembly contests challenging for BJP. Aware of the need to respond to the situation with alacrity, Prime Minister Narendra Modi visited the town, met survivors, and held discussions with officials. He chose not to cancel his programme at Kevadia a day after the accident, saying that though he has rarely experienced such pain, he needed to respond to the call of duty. Modi was at the Statue of Unity, raised in honour of Sardar Vallabhbhai Patel, and he invoked the leader’s commitment to shouldering responsibilities. Though relatives of victims remain distraught and question the administration’s slackness, Modi’s decision to visit Morbi indicated
his desire to step up and take charge of the situation in terms of its public fallout.

While questions have been raised about the failure to act against Oreva Chairman Jaysukh Patel, local reports suggest that the company’s decision to maintain the bridge might have been part of its image-building, rather than a business venture. Videos of the bridge being thrown open to the public have Patel claiming that the suspension cableway would be good for another 8-10 years. It is, however, clear that the municipal corporation and the district administration were negligent in failing to monitor the arrangements. Though it was Oreva’s job to ticket the passage and manage crowds, the administration should have noted the need to keep an eye on a popular evening spot. A clause in the maintenance contract that apparently states the municipality will not have anything to do with the operations at the bridge is raising eyebrows. Pleas have been filed in the court and it remains to be seen if a probe by a sitting or retired judge is ordered. So far, the state government has taken no step in this direction.

The morbid tragedy is the latest in accidents caused by the failure of government and private operators in running various public facilities. A lack of procedures and oversight has resulted in fires in cinemas and hospitals, the collapse of road and rail bridges, and stampedes due to local administrations not regulating crowds at popular religious shrines. The sickening regularity of such incidents is a strong indicator that the processes of accountability and punishment of the guilty are time-consuming and often enough to let the accused escape unscathed. The state of the British-era Morbi bridge suggests that no more than a few dozen people should have been allowed on it, far less than the estimated 200 when it came crashing down. While Oreva will need to answer for both the work done on the bridge and the management of crowds that visited the spot, the local administration faces scrutiny for having virtually abdicated a popular and crowded venue to the care of a private operator.

The prime minister’s call for a detailed and impartial investigation raises hopes of accountability for the disaster that has a man-made imprint all over it. The callous disregard for human life that reduces tragedies to numbers that are soon forgotten as the media glare dims has been a story retold several times over. In 1979, Morbi was in the news for a dam burst when the earthen barrier situated 6 km upstream from the town was swept away by the force of a flood wave caused by torrential rain. The flash flood killed thousands of people and hundreds of livestock and took weeks for the civil and military authorities to bring about some semblance of order. In comparison, the numbers of bridge collapses are smaller but offer little comfort. More than four decades later, it might have been reasonable to expect an improvement in civic planning and administrative supervision to the extent that preventable disasters were reduced, if not eliminated. Morbi shows much more needs to be done.