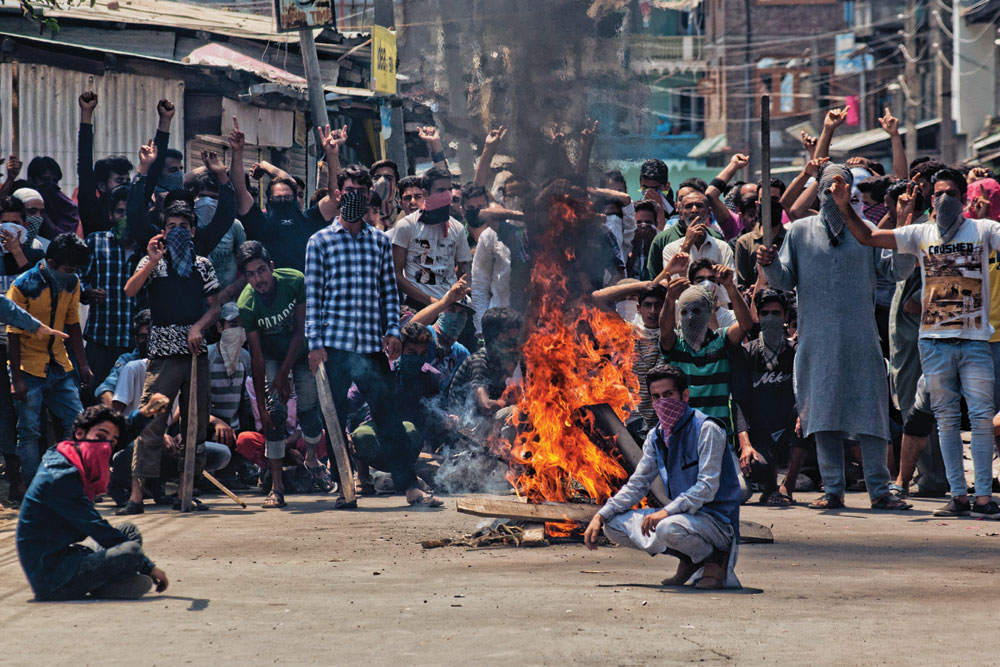 A protest in Srinagar on July 23, 2016 in the aftermath of Hizbul Militant Burhan Wani’s death (Photo: Getty Images)


AS IN AN ORCHESTRA, each player has its own instrument to play but sharing the same stage, every player or member of the orchestra knows the other player and the role the other person has to play. It is the conductor of the orchestra holding the baton in his hand who with the raising of his baton directs which player has to play when and what part. In this conspiracy, the baton was held by a conductor sitting across the border in the form of Pakistani agencies such as ISI etc., and each of the conspirators knowing every other conspirator was playing his own role as per the directions of the conductor in order to create a symphony of bloodshed, violence, mayhem, and destruction with the ultimate object of secession of J&K from UOI [Union of India].”

This is what a National Investigation Agency (NIA) court in Delhi observed on March 16 as it ordered the framing of charges under the Unlawful Activities (Prevention) Act (UAPA) against various separatist leaders and others in the Hurriyat terror funding case. The NIA had in 2017 begun an investigation into information received from the Union home ministry that some separatist leaders were acting in connivance with terrorist organisations for raising, receiving and collecting funds through illegal channels, including hawala, for funding terrorist activities in the Kashmir Valley. This included creating chaos, especially in 2016, after the killing of the Hizbul terrorist Burhan Wani. Largescale stone-pelting and attacks against security forces were orchestrated to create mass disruption in the Valley. This is what the NIA court alluded to on March 16 while making its observations, after which it ordered the filing of charges against more than a dozen people, including terrorist-turned-separatist leaders Yasin Malik and Bitta Karate, businessman Zahoor Ahmad Shah Watali and his partner Naval Kishore, and the late separatist leader SAS Geelani’s son-in-law, Altaf Ahmad Shah. Others accused in this case are the chief of the Lashkar-e-Toiba, Hafiz Saeed, and the chief of the Hizbul Mujahideen, Mohammed Yusuf Shah, both based in Pakistan.

One of the accused, the Kashmiri businessman, Zahoor Ahmad Shah Watali, was arrested in 2017. NIA has accused him of receiving money from Hafiz Saeed and from other sources in Pakistan, which he was then distributing among Hurriyat leaders, ultimately making its way through the separatist ecosystem in the Valley. In December last year, the Kashmiri mainstream leader Mehbooba Mufti had appealed for his release on medical grounds since he is suffering from prostate cancer.

The NIA investigation also claims that Watali’s partner Naval Kishore Kapoor had entered into an agreement with one of his companies, Trison Farms and Constructions Pvt Ltd, to take a big chunk of land in Budgam in Central Kashmir on lease for an amount of ₹ 6 crore. Most of this money was paid in 22 installments between 2013 and 2016. The NIA’s investigation revealed that no land existed in the name of this company. It also found out that Kishore had mobilised this money from unknown sources. Watali was in contact with Pakistan’s Inter-Services Intelligence (ISI), especially with one man identified as Iqbal Cheema, working in the High Commission of Pakistan, NIA has claimed in its chargesheet.

On Watali’s and Kishore’s association, the NIA court observed: “After such a long association, it is hard to believe that accused [Kishore] would not have known of the connections of accused [Watali] with separatists or secessionists and further creation of an agreement which on the face of it appears was executed with a person who had no ownership of that land, was executed with no intention to carry it forward or to act upon it and then remitting the huge amount of money from unknown sources in its name as the accused had not shown the sources of such money, raises a grave suspicion of these funds being remitted from parties interested in and for the purposes of secessionist activities.”

In its observations, the NIA court relied upon statements of several protected witnesses, some of whom were associated with the Hurriyat. One of them revealed that in several meetings of the Hurriyat, he heard the name of an ISI officer Javed Rathor taken several times, who allegedly was the person delivering funds to Watali.

Another protected witness was in a meeting held at the house of SAS Geelani in November 2016. This meeting, he has told NIA, was attended by several accused in the case, including Yasin Malik and Bitta Karate. In the meeting, according to him, directions were given to hold mass protests across the Valley. He claimed that Malik and others would instigate the youth to organise protests and burn government property, and also encourage people to attack the security forces with stones when they surrounded houses where terrorists would be holed up.

ANOTHER WITNESS, a former stone-pelter, has said that the incidents of stone-pelting were not spontaneous but planned. He has revealed that he himself received money at least twice for indulging in stone-pelting—once an amount of ₹ 20,000, and then ₹ 40,000 from a Hurriyat operative in 2016.

Witnesses have also revealed that some funds for these violent activities would be garnered by facilitating admission to professional courses in Pakistan. Visas for such admissions were granted to students on the recommendation of the Hurriyat leadership. One witness has confessed that he himself met ISI’s Cheema and Rathor, who were facilitating these transactions. Separately, in August last year, the Jammu and Kashmir police arrested four Hurriyat workers who had raised funds of ₹ 4 crore in lieu of admission to MBBS seats in Pakistan. DGP Dilbagh Singh told journalists that they had found about 80 cases where students were sent to Pakistan after paying Hurriyat over ₹ 10 lakh each.

In the case of another accused, Nayeem Khan, the court took note of a letter that Hizbul’s Burhan Wani had allegedly written to him on the instructions of Syed Salahuddin. The court observed that the faith reposed by Salahuddin in Khan establishes the conspiracy.

The NIA had in 2017 begun an investigation into information received from the Union home ministry that some separatist leaders were acting in connivance with terrorist organisations for raising, receiving and collecting funds through illegal channels, including hawala, for funding terrorist activities in the Kashmir valley

While ordering the framing of charges against radical Islamist Masarat Alam Bhat under Section 38 of UAPA, the court took note of a video in which he is shouting slogans like: “Jeeve jeeve Pakistan, teri jaan meri jaan Pakistan/ Hafiz Saeed ka kya paigam, Kashmir banega Pakistan.” The court observed that “The moment the accused, who has a considerable following, is chanting this slogan in a public rally, he is associating himself to Hafiz Saeed and in turn with HM [Hizbul Mujahideen] and when he asked the public to chant behind him this slogan, he furthers the cause of HM by asking people to follow the path shown by Hafiz Saeed and HM.”

In the case of former legislator Engineer Rashid, the court again relied on a video in which it observed that the accused had been trying to incite disaffection against the Indian state and the Indian armed forces. “He is seen issuing subtle, but ominous messages to the police personnel of J&K asking them not to obey the orders of their officers, as accepting those orders would amount to committing atrocities on their own brothers. Then there are veiled threats. He has also tried to incite a feeling of disaffection amongst police personnel of J&K against the Indian Army which directly is a challenge to the government of India as by law established. There are witnesses who have spoken about the connection of this person with stone-pelters which reflects how his words are taken and how he executes what is stated in his speech. It is also to be considered that these are words spoken by a person who was a member of legislative assembly having a considerable following,” the court said in its comments.

Earlier this year, NIA had to even arrest one of its own senior officers, Arvind Digvijay Negi who, as a superintendent of police (SP), was the chief investigating officer in the case. He was arrested on charges of sharing official documents with an overground worker of the Lashkar-e-Toiba. But according to a senior NIA officer, Negi’s alleged complicity had weakened one of their other cases pertaining to the Line of Control (LoC) trade but had no bearing on the Hurriyat terror funding case.
The defence, in this case, had argued that Hurriyat was not a banned organisation, and hence its members did not constitute being members of a terrorist or an unlawful organisation. In response, the court pointed out that no formal declaration or placing of a group/organisation in the schedule to UAPA is required to hold the group as a “terrorist gang”.

“APHC [Hurriyat] was formed by bringing together under its banner many other groups, some of which had secessionist agenda but the agenda of APHC was certainly secessionist in nature,” the court observed.

The court further observed that prima facie the accused “were not following the Gandhian path but their plan was straight from the playbook of the likes of Hitler and the march of the brown shirts. The object was to overawe the government by the sheer scale of violence and was nothing less than a plan for insurrection.”
The government has now for several months mulled over the idea of banning all factions of the Hurriyat. It has already banned Jamaat-e-Islami and the Jammu and Kashmir Liberation Front, which were part of the Hurriyat. In the meantime, the crackdown in Kashmir continues. On March 27, a big search was conducted in Srinagar in which documents related to certain financial transactions were recovered.

“It will take time, but we are on the right path,” says the senior NIA officer.