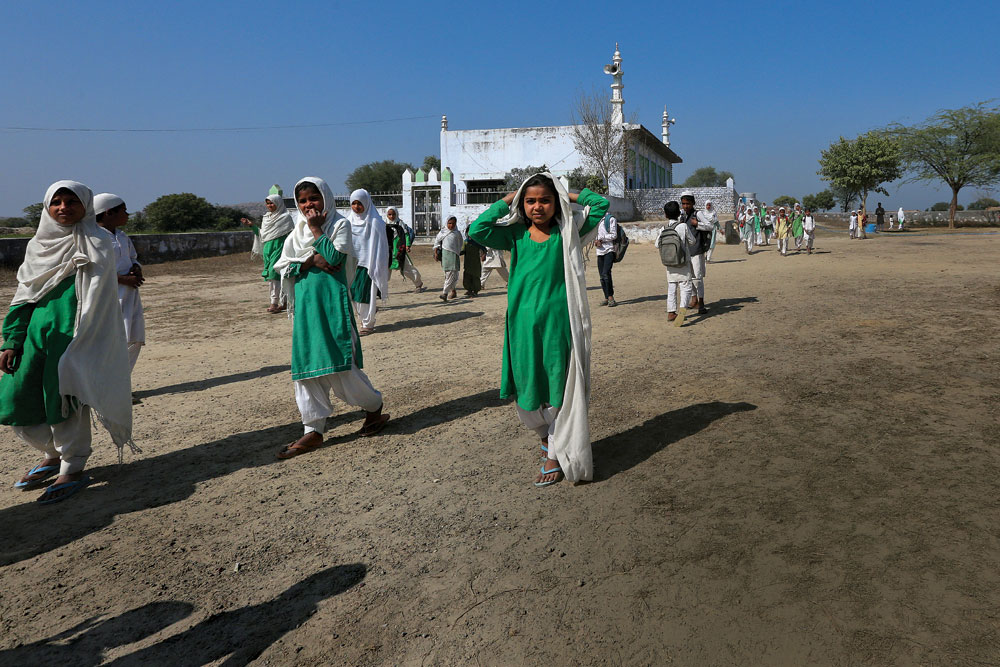 WHEN MUSKAN SAEED, 13, approached Mubasshira Khan, 23, a few months ago, the former was on the verge of a nervous breakdown. Her menstruation cycle had started two weeks ago and would not stop. Apart from the sheer physical trauma, Muskan was at her wits’ end; she didn’t know who to talk to and was hoping Khan would help her out. “I have told the girls in the village that they can always come and talk to me, no matter what the issue. And periods happen to be a particularly sensitive subject. Girls don’t even discuss it with their mothers, forget about each other,” Khan tells Open. We are standing in the courtyard of Maulana Iliyas Creative Girls Public School, a private school Khan runs in her village of Jamalgarh in the Nuh district in Haryana as she pursues her Bachelor of Education at Jamia Millia Islamia in Delhi. Muskan is standing with a group of girls, all crowded around a poster which at first glance looks like a calendar. It is is a ‘period chart’, for tracking one’s menstrual cycle. Done up in blue and white, the chart has a basic design with columns for names of family members and the months marked from November 2020 to May 2021. Two things stand out: one is the phrase ‘periods chart’ in Hindi, emblazoned in red against a stark white background on the top; the other is the image of a sanitary towel that forms the background of the chart. Ostensibly, the chart is for women to track their dates but actually it helps start a conversation about menstruation, shrouded in taboo and silence. Or so Sunil Jaglan hopes.

Keen followers of social media campaigns may remember Jaglan, a former sarpanch of Bibipur village in Haryana’s Jind district, as the man behind the ‘selfie with daughter’ campaign, an initiative launched in 2015 which invited people to share photographs with their daughters. Jaglan had started the campaign to raise awareness about the girl child in his state, infamous for its skewed sex ratio resulting from female foeticide. His campaign, which even caught the attention of Prime Minister Narendra Modi, became a nationwide craze. Over the years, Jaglan has been working on several related issues from female foeticide to representation in village governing bodies. And now he wants to shift the focus to menstruation. “It’s not easy for me to talk about it. When I had first become the sarpanch around 2012, I had ordered sanitary pad-making machines for my village but I could never bring myself to have a conversation about them. I just felt that it really wasn’t my area.” Jaglan uses the commonplace Indian phrase, ‘ladies’ problem’, talking about his earlier attitude towards menstruation. Now, his conversation is peppered with terms like ‘periods’, ‘sanitary pads’ and ‘mensutral cups’ and is eager about women sharing their stories. The idea for a ‘period chart’ came after he read a news report about today’s girls hitting puberty earlier. Jaglan had a long conversation with his wife to understand the nitty-gritties of the biological function and realised that whereas the average age at which women start having periods in Haryana, till even a decade ago, was 15, it had since fallen to 13, such as in the cases of Muskan and Mubasshira. While the latter’s periods began at 15, Muskan’s started at 13. In the past Jaglan had organised village meetings to kickstart his campaigns and try and get a conversation going but that approach was not feasible for menstruation. And that is when he hit upon the idea of a period chart.


The narrow focus on providing pads to women overlooks the larger behaviour that menstruation involves. That would require building toilets, disposing waste and talking about the impact on women’s health

The first thing that catches the eye upon entering Shahnaz’s house in Sakras village in Nuh is the period chart, pasted in the centre of the living room wall facing the entrance. Zipping around on her scootie, Shahnaz, 26, is a familiar sight in the village now but it has been an uphill battle of acceptance for her in an area where families pull girls out of school once they hit puberty and tightly control the latter’s use of mobile phones. “When I first put up the chart in the living room, a very deliberate move on my part, I was asked by a female visitor to remove it. No man dared to bring it up directly but there were murmurs all over the village,” she says. Shahnaz was 16 when her periods began. She remembers the censure that brought upon her: “Itni jaldi? [So early?]” asked a hostelmate. “I was in a hostel then and no one was willing to tell me what was happening. My warden explained, rather kindly, I now realise in hindsight.”

Menstruation remains an uneasy and stigmatised issue even in cities. Some younger girls are aware of it thanks to an older sister or a sister-in-law but most are taken by surprise when their cycles begin. Anjali Kumari, 23, who works in Nuh with Jaglan’s Selfie With Daughter Foundation, did not tell her mother for months that her periods had started. She knew that cloth was a preferred option in her household because of her friends but hesitated broaching the subject with her mother. Hers is not an isolated case. In the villages of Nuh Open visited, girls would go into a huddle giggling or turn away their faces when asked about menstruation. Shahnaz has been shushed by women she considers friends whenever she brings up the period chart. “What are you talking about?” and “Why will I discuss this with you?” are two of the most common responses she hears. But she persists. And she along with two other activists, Poonam Bhujia and Zeenat Khan, from the neighbouring village of Ferozepur Zikra have had some success: they have managed to convince a handful of girls to put up the charts in their rooms, even if it remained hidden behind clothes hung up on the wall. The final aim is to bring the discussion out in the open.

“Menstruation is very stigma-ridden in our society. The entire idea is to hide it,” says Srilekha Chakraborty, a menstrual health activist who works in Jharkhand. She is also the brain behind the popular campaign ‘#PeriodpeCharcha’ in Tribal villages in the state. “Women here earn Rs 120 for a day’s work, earnings that feed their entire family. Buying sanitary pads out of that amount or skipping a day’s work because of backache or cramps are not options for them.” In Nuh too, women talk about working in the fields and not taking time off. “The girls stay emotionally disturbed, but they don’t have the language to articulate what is wrong. Weepiness, irritation, pre-menstrual syndrome have a very strong emotional component but if we are not even willing to acknowledge the physical aspect of the situation, how do we address the emotional part?” says Shahnaz who has had girls throw back sanitary towel packets at her saying what do they even need it for.

In 2011, an NGO report had revealed the worrying statistic that only 12 per cent of Indian women had access to sanitary pads. In rural India, women used either cloth (again a very small percentage) or leaves, hay and even socks stuffed with socks. In the villages of Nuh, Open met women who conveyed that they don’t use anything to absorb the flow during their periods. Since then strategies have been developed and schemes launched to provide sanitary napkins to women. The 2015-2016 National Family Health Survey reported that pad use had risen to 58 per cent across India. In his 2020 Independence Day speech, Modi became the first prime minister to talk about periods publicly when he spoke about the ease of access to sanitary towels for women under the Janaushadi Suvidha Sanitary Napkin scheme.

But sometimes solutions create new problems. The narrow focus on providing pads to women overlooks the larger behaviour that menstruation involves. That would require building toilets, disposing waste and talking about the impact on women’s health. Cloth, for instance, is a sustainable and even hygienic substitute for pads that make use of non-degradable plastic but women are unable to wash or dry them properly owing to the culture of secrecy and shame that surrounds menstruation. “In most areas you will find that there is always a bigger fight, so menstrual health takes a backseat. Even during elections, religion is an issue, as is land or prohibition but never women’s health. These are often dismissed under the garb of women’s problems,” says Chakraborty.

Both Jaglan and Chakraborty realised early on that talking to people about menstruation wasn’t going to work. Especially for Jaglan. Chakraborty hit upon the idea of wall art to start a public conversation around the superstitions regarding menstruation to supplement Jaglan’s period chart.

ON HEARING ABOUT the period chart, Mubasshira got in touch with Jaglan and insisted he send her an image on WhatsApp immediately so she could take A4 printouts as soon as possible. One can these sheets put up in several households in her village now, though getting girls to talk about them or periods openly is still difficult. One exception is Shafiya, mother of three children with the youngest only a few months old. Among the women who gathered around her, some giggle and most frown in disapproval as Shafiya talks about periods. On being asked how they keep track of their cycles, they turn their heads away or laugh into their dupattas. Shafiya has not had a cycle for over three months now but won’t go to a doctor, dismissing health concerns with a wave of her hand. “This happened even after the birth of my second child. We are tougher than all this,” she says.

Are they? Cervical cancer is one of the largest contributors to women’s cancer deaths in India. The incidence of the disease, linked to poor menstrual health, in India is much higher than the global average. “The point is that we dismiss it as an issue of concern for women but we don’t give women the space to talk about it,” says Jaglan who hopes that seeing period charts in their houses will at least sensitise the next generation of men. He started in Nuh rather than Jind, his own district, because the former is among India’s most backward regions.

Jaglan is aware of the irony of a women’s cause being championed by a man but he hopes that his team of volunteers spread extensively across Haryana, all young girls who reached out to him after his ‘selfie with daughter’ campaign, will lay to rest any such question. “We are all in this together. We have to bring out menstruation from this dark corner we have shoved it into.” And the first step towards it may just be putting up a period chart in the open.