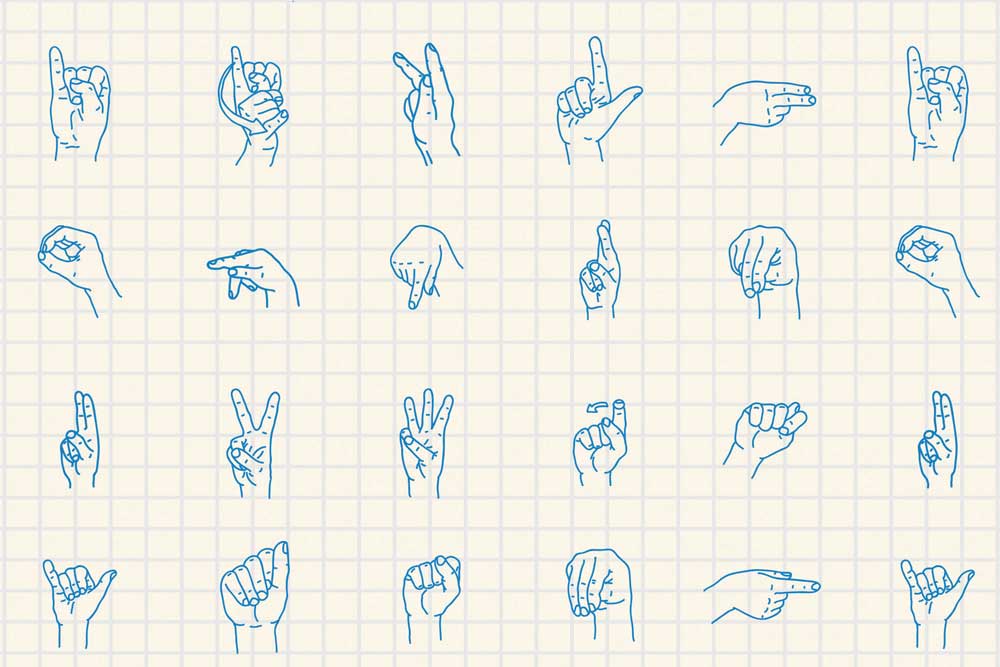 
FOR MUCH OF THEIR EARLY LIVES, ANUJ JAIN and his sisters carried out their conversations in secrecy. Born deaf, like his three sisters (a fourth sister is capable of hearing), Jain and his siblings were taken to a wide assortment of doctors, quacks and temples by his parents to cure them of their deafness. He was also taken through a procession of schools, some of them mainstream. One school for the deaf where he spent some years, he recalls, insisted on oral education. Students were made to undergo speech therapy, taught written communication and lip-reading. But it was in the quiet moments of their lives at home, when their parents’ gaze was turned away, or on bus trips where they had only each other for company, that Jain and his sisters conducted a rich and secret conversation in signs.

The signs were instinctive and made up mostly by themselves at home in Delhi, although an elder sister who had begun to go to a school for the deaf had introduced some signs she had picked up from her classmates. His parents, who were hiding the fact that four of their children were deaf, were aghast. The children were barred from making signs, and were told they could only respond to the queries of visiting guests through smiles. “It was a big confusion in our lives,” Jain says in an interview on Zoom, with his daughter Ananta serving as interpreter. “We were capable of very fluent conversations among ourselves through signs. But we were just barred from using them.”

It was only much later at the age of 18, when he began visiting a nearby church where he encountered a deaf priest, that the world of what is referred to as the Indian Sign Language (ISL) fully opened up to him. He began formally learning the language, and began meeting and communicating with other deaf individuals through it. “To the deaf, sign language is our mother tongue. But in most cases, many of us are just not allowed to learn it,” he says.

For years, ISL has suffered from a lack of promotion and recognition. The 2011 Census mentions that there are 1.3 million people with “hearing impairment”, although many believe the number of deaf would be much bigger. Of these, a very small percentage has formally learnt to use ISL, and even when some of them gain fluency, they mostly encounter spaces where ISL is nearly non-existent. A vast number of schools for the deaf still insists on an oral method of education whereby they are taught to read lips and speak and the use of sign language is discouraged, based on outdated notions that it is inferior to written and spoken language, and most teachers in these schools do not suffer any hearing impairment (members of the deaf community believe only those who are deaf are most capable of teaching the deaf). 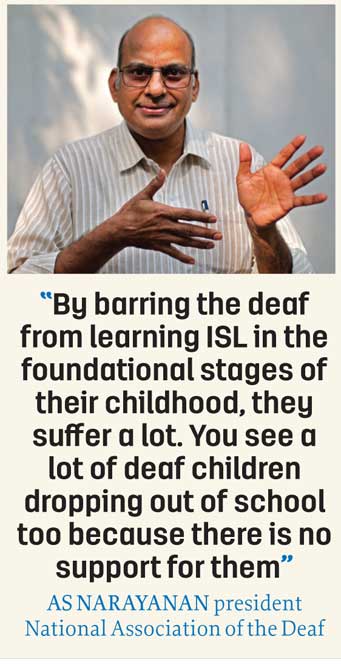 According to AS Narayanan, the president of the National Association of the Deaf, this lack of recognition and efforts to promote ISL has meant that the deaf have languished. “By barring them from learning ISL in the foundational stages of their childhood, they suffer a lot. You see a lot of deaf children dropping out of school too because there is no support for them,” he says, through an interpreter. He also points to the many hurdles—from the recent case of a deaf girl in Chennai who had been raped over several months by those working in the building where she lived, to instances where the deaf are arrested on false charges—to show how the life of the deaf is fraught with challenges that could be changed if only ISL saw more promotion. According to Mathew Martin, an ISL researcher who works at Ali Yavar Jung National Institute of Speech and Hearing Disabilities in Mumbai, sign language has remained stigmatised, sometimes more than deafness itself.

But there appear to be efforts now to change that. The Indian Sign Language Research and Training Centre (ISLRTC), established in 2011 to promote and research ISL after much campaigning by activists in the deaf community, has been trying to codify and standardise the language by bringing out various editions of an ISL dictionary. A fourth edition that will expand on the 10,000 signs of the previous edition is believed to be in the works. The National Council of Educational Research and Training has been translating their textbooks into ISL-based digital formats. (So far, books up to Class 6 have been done and the rest are in the works.) An ISL dictionary app, Sign Learn, was recently launched by the government, which includes everything from signs of everyday use—like those for Aamir Khan (running a finger through the head to suggest the scar Khan carries on his head in the film Ghajini, or drawing two small lines under your lower lip to suggest the goatee Khan sports in Dil Chahta Hai)—to signs for technical, academic and other fields. The National Education Policy (NEP) has declared “ISL will be standardised across the country and National and State curriculum materials developed, for use by students with hearing impairment”. And Prime Minister Narendra Modi now frequently brings up the government’s efforts at promoting and standardising ISL, most recently about the need to have one uniform sign language or “one nation, one sign language” while talking about the need to have uniform sets of policies across the country.

But as efforts to promote it begin, more people are also beginning to realise just how many variations exist.

It was in the late 1970s and early 1980s when researchers like Madan Vasishta, who is also deaf, began to argue that the signs used by the deaf in India constitute a language in its own right. Analysing the grammatical structure of signs used across Mumbai, Delhi, Kolkata and Bengaluru, Vasishta and his collaborators averred that ISL was a distinct language, one that had its own rules of grammar and lexicon and which had developed indigenously in the country. Martin points out that other researchers like the German linguist Ulrike Zeshan, who specialises in sign languages, have shown quite a bit of similarity in those used across South Asia. “Dr Zeshan refers to it as the Indo-Pakistan Sign Language, and has shown the similarities in grammatical structure across India, Pakistan and Nepal,” he says.

But there are variations even within India. Some, like Narayanan, say that the variations are minimal and do not hinder communication. “Ninety-five per cent, it is the same. A deaf person from the north can mostly understand a deaf person from the south,” Narayanan says. But others argue that the differences can be quite significant. Some even fear the process to standardise ISL might lead to a “dialect” from one region imposing itself on others.

Wide differences can also be found based on whether the signs are used in urban or rural settings. A 2008 paper titled ‘Assessment of Regional Language Varieties in Indian Sign Language’ by Jane and Russell Johnson, which cites the research of Jill Jepson, states that while urban signs can be considered one language across India, rural signs comprise “of a variety of independently invented sign languages used by isolated deaf individuals”. The deaf in urban middle-class settings will have more resources for education and are likely to come in contact with others who are deaf, and thus learning a common language, the researchers write. But since the deaf in rural areas have fewer chances of education and interaction with other deaf individuals, their signs and gestures have usually developed in more isolated settings and thus vary across locations and even individuals. 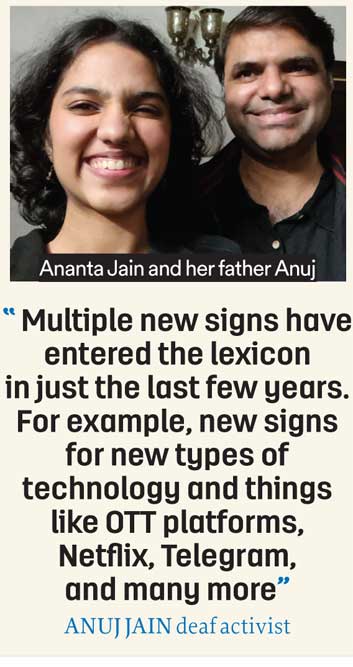 But ISL, even when seen as a monolithic structure with multiple variations or dialects, is rapidly expanding and getting standardised as the deaf from different regions meet and communicate, online or in person. “ISL is a growing language. Newer signs are coming in all the time,” Narayanan says.

The emergence of smartphones, social media and video platforms, which has given the deaf a new way to communicate, is also accelerating the evolution of ISL. New words are being invented, multiple variations being standardised, and these changes are getting adopted almost instantly.

“Multiple new signs have entered [the lexicon] in just the last few years. For example, new signs for new types of technology and things like OTT platforms, Netflix, Telegram, and many more,” Jain says. “What happens now is that Deaf leaders begin to use a new type of word, and these new words get picked up almost instantly in the Deaf culture, and soon you find everyone using it,” he says.

Elsewhere, some sign languages like the American Sign Language (ASL) are also evolving to reflect shifting cultural norms on topics like gender neutrality. While traditional signs for “parents” involved placing a hand at the head for “father” and then a hand at the chin for “mother” in ASL, a newer version, according to the New York Times, is done by placing a hand at the middle of the face to avoid gendered signs. Other examples include the sign for the word “privilege”, which in the past resembled the action of slipping a dollar into a shirt pocket, but which now, because such an action is inadequate in depicting the privilege associated with race and gender, has found a newer sign that is more reminiscent of the ASL sign for “inequality”.

Anuj Jain’s daughter, Ananta, who can hear, did not have to make an effort to learn ISL. She was born into it. The 22-year-old aspiring filmmaker, who recently graduated from college, began to pick up ISL right from her days as a toddler. “When she was six-months-old, she was already making signs for milk,” Jain says.

Conducting the interview on a Zoom video call today, Ananta translates Jain’s signs into spoken words, but every so often, they retreat into a private and animated conversation among themselves, a language of fathers and daughters but conducted in signs.

Jain is also an example of how well the deaf can do if their language gains support. A well-known activist for the deaf community, he has begun working for a tech solutions company, Bridge Connectivity Solutions, as a manager for an ISL translation project. He is also part of a six-year-long project to translate a popular series of books into ISL that will be uploaded online.

Last year, he was also part of an independently produced yet-untitled film wherein he enacted the role of a deaf individual who communicates through ISL. It is expected to hit the film festival circuit soon. When the script containing his dialogues was delivered, it however came in a written format. When Jain insisted that written and verbal dialogues don’t naturally translate into sign languages, his dialogues were conceived in ISL instead.

“It was a great experience. There were two ISL translators on the sets too. And barring us, others were all hearing individuals. Everyone on the sets was so surprised to see the deaf working as well and fast as the rest,” he says. “But that is what people like us have been saying all this while.”