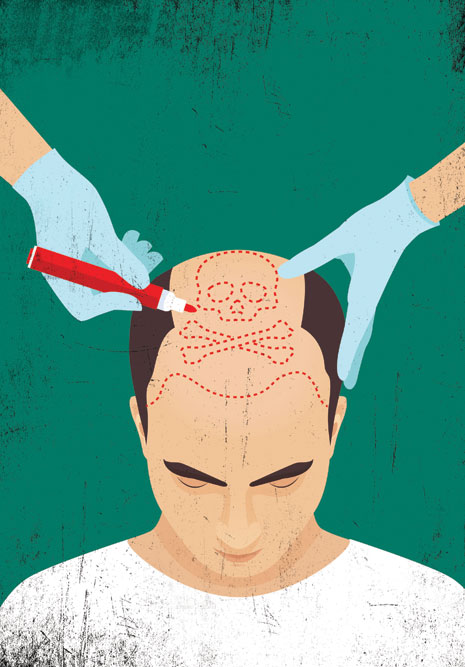 
THREE YEARS AGO, when Shrawan Kumar Chaudhary told his family he was going to acquire new hair, they assumed he meant another wig. For generations, males in the Chaudhary family line had been doomed to a poor crop that invariably thinned—and in some cases was replaced by bald patches—well before middle age arrived. It was something they just had to make their peace with. But 43-year-old Shrawan Kumar Chaudhary, as his brother Shiv Karan Chaudhary describes, was putting up something of a fight. The founder and managing director of a courier service headquartered in Mumbai, he had been trying to stem the march of depleting cover for several years, taking the advice of friends about what he could do, and even begun wearing a wig.

It was only later that night on March 7, 2019, when Shrawan called from the doctor’s clinic, that they learnt he was undergoing a hair transplant. To the family, the doctor had exploited Shrawan to convince him to go under the knife. “He brainwashed my brother,” Shiv alleges.

The surgery went on, according to the family, for nearly 16 hours, from 1PM on March 7 to beyond 4AM the following day, with multiple breaks in between. Hair transplants tend to be tedious procedures where follicles from regions that continue to sprout hair, for instance the sides and the back of head, are extracted and transplanted — in Shrawan’s case, from his chest to his head—and can go on, depending upon the severity of the case, for long durations. Shrawan’s family alleges the doctor compromised on the safety of the procedure by transplanting far too many follicles in one sitting.

A shooting pain arose in the nape of Shrawan’s neck immediately after the infection. He was wheeled into a nursing home at first from where he was discharged after a few hours, but soon his face began to swell and he had to be rushed to a nearby hospital. “The swelling happened so quickly and it was so immense, he was finding it difficult to speak and breathe,” Shiv says. By the next morning, a little over 48 hours after the procedure, Shrawan lay dead. “He was just in his 40s. He was perfectly healthy,” Shiv says. “If this procedure is so safe as people say, how could he die?”

Hair transplant or hair restoration procedures are considered to be among the safest cosmetic surgeries globally. Although there have not been many reports looking at the growth of the market in India, anecdotally, hair transplant surgeons say, the country is witnessing a massive boom in men going under the scalpel. A 2013 report published by Frost & Sullivan estimated that the market was worth ₹453 crore in 2012-13 and would grow at a compound annual growth rate of over 25 per cent in the following years.
According to doctors, a combination of factors—from improved hair transplant technologies, the declining costs for such procedures, made sweeter with the availability of EMIs and other financial schemes, along with men getting over their hesitation and embarrassment for cosmetic procedures—is pushing more men to get new hair.

But underlying this boom is the dangerous trend of dodgy clinics and salons mushrooming all over the country where untrained professionals, often technicians who might have assisted doctors in the past or watched videos of such procedures online, perform such surgeries on the cheap, often to disastrous and sometimes fatal effects.

In Shrawan’s case, the doctor performing the transplant was a trained and registered professional. But in the last few years, several cases of adverse reactions, such as infections and allergies, sometimes leading to organ failures and deaths, have been reported across India, a majority of which occurred at the hands of untrained professionals.

“It’s unfortunate but we are leading in the number of deaths globally,” says Dr Anil Garg, the president of Association of Hair Restoration Surgeons (AHRS), India.

Although medical bodies and government officials have been slow in waking up to these challenges, the recent spurt in fatalities is now pushing some to deal with it. Earlier this year, the Delhi High Court, while hearing the case about an individual who had died from complications arising after a hair transplant procedure, called for a crackdown against establishments run by untrained professionals and called for the framing of medical protocols to guide those in this field. The National Medical Commission has now issued guidelines that stipulate the kind of expertise (a formal training in plastic or dermatological surgeries) and infrastructure (either at a hospital or a clinic tied up with a hospital) required to conduct such procedures.

To Dr Manoj Khanna, hair transplants began to take off in India after 2008. “It was the year Harsha Bhogle and Salman Khan came on screen with hair transplants done,” Khanna says. There had been whispers of celebrities going abroad for getting these jobs done, Khanna says, but with these two it was very obvious that they had gone under the knife. “Especially Harsha. How do you explain that kind of hair? Also he was very open about having done it,” Khanna goes on.

Khanna is among the most well-known hair transplant surgeons in India. Responsible for turning back the time on many a celebrity head, especially cricketers and commentators, including Bhogle, he performs anywhere between 400 and 500 hair transplant procedures every year.

What also helped was the reduction in costs. A hair transplant job that would cost about ₹5 lakh on an average about a decade ago will cost anywhere between ₹2 lakh and ₹3.5 lakh at a reputed clinic now.

There are other factors too. More individuals appear to be losing hair and at a younger age than before because of a variety of reasons, says Dr Mayank Singh, a hair transplant surgeon and honorary secretary at AHRS, from poor nutrition and unhealthy lifestyles to leading increasingly stressful lives. “I get children as young as 12 and 13-years-old complaining about unnatural hair loss. About 5 per cent of my patients are people between 16 and 22 years of age,” Singh says. Although he avoids conducting transplants on anyone younger than 21, he recently made an exception for an 18-year-old whose hair loss had triggered depression.

The technologies have also improved, and so have the results. The current methods of follicular unit transplantation (where a piece of skin or scalp along with the follicles from the donor site is taken off and transplanted on the skin on the target area) and follicular unit extraction (where individual hair follicles from the donor site is taken and transplanted to the target site), and sometimes a combination of these, have done away with the patchy hair plug-like appearance of the past to make it almost undetectable.


Some of the boom in transplants can be attributed to the pandemic. Covid-19 infections appear to have triggered more hair loss in some individuals. And during the pandemic, the condition that some have termed as “Zoom dysmorphia”—where people spending endless hours on video calls are confronted with their faces and perceived flaws like a receding hairline and feel the need to fix it—has further fuelled the demand. Extended time away from office also gave men the cover they needed to slip away for the procedure and recover away from prying eyes of co-workers. Anurag (name changed on request), a 29-year-old corporate professional in Delhi, for instance, underwent a hair transplant earlier this year. “This was a perfect period. Since I am still working from home, I haven’t had to meet or explain to any of my colleagues or even friends,” he says. “It’s been five months since the surgery, and so far only my immediate family knows.”

About 48 hours after the procedure, Shrawan Chaudhary was dead. His family alleges the doctor compromised on safety by transplanting far too many follicles in one sitting

Although he doesn’t plan to lie if someone asks if he underwent a transplant, he wonders if this question will even be asked. “I’ll be getting a haircut soon, and the length of my new and old hair will be evened out. Maybe it won’t be too noticeable,” he wonders.

To Khanna, however, it wasn’t the frequency of Zoom meetings that triggered this boom, but the culture of taking selfies on the phone. Also, Khanna claims, unlike balding men in other cultures who might shave off what is left of their hair, the vast majority in India, because of the cultural connotations between a shaved head and mourning, will have no recourse but to either opt for the embarrassing comb-over or go under the knife.

These factors have led to a massive demand in hair transplants, but many of the clinics that have sprung up to cater to them are establishments run by individuals with little experience or training. “Technicians who might have helped out doctors before have established their own centres, and sometimes work out of hair salons, where they do surgeries for as less ₹12,000 to ₹15,000,” says Singh, who adds that around 35 to 40 per cent of his procedures tend to be rectifications of previously botched-up jobs. He also points to the proliferation of ghost surgeries, where a doctor may be the face of the enterprise, but the procedures are really carried out by his technicians.

According to Jayashree Gupta, a former bureaucrat and the president of Consumers India, an organisation that advocates for consumer rights, the mushrooming of these unregulated clinics and the misleading claims they make have often escaped scrutiny. “Everywhere you look, there are ads, on shop fronts, newspapers and the internet, making claims like ‘Walk Out with New Hair.’ It’s very scary. Because firstly it is untrue, and secondly the people going for such procedures are not being made aware of the risks, or the ability of those performing it,” says Gupta, who has been tracking and campaigning for more overseeing over these clinics.

In most cases, doctors say, individuals rarely make complaints about botched-up procedures because they are either too embarrassed about admitting they went through such a procedure, or they settle for discounts on the next procedure. Many of these clinics are operated out of rundown establishments, sometimes with as many as four patients undergoing procedures simultaneously in a single room, with no infrastructure to handle emergencies if they arrive. “I have even heard of cases where the follicles of one person have been mistakenly transplanted on another. No wonder we have begun to see deaths in procedures that are largely safe otherwise,” says Singh.

One such death surfaced when the case came up for hearing in the Delhi High Court earlier this year. A 35-year-old, named Athar Rasheed, had died last year a day after getting a transplant for ₹30,000 at what Singh describes as a hair salon in Delhi’s Rohini area. “They called it United Hair Studio, and it was nothing but two rooms in a building that had been taken on rent,” says RD Rana, the lawyer who took up the case on behalf of Rasheed’s brother Azhar Rasheed. “A couple of technicians who had worked with a hair transplant specialist before had thought they had learnt enough to start their own enterprise.”

“Athar was working in the TV industry,” Rana says. “He thought a hair job would give his career a boost.”