A pandemic lesson in crowd management from the Puri Rath Yatra 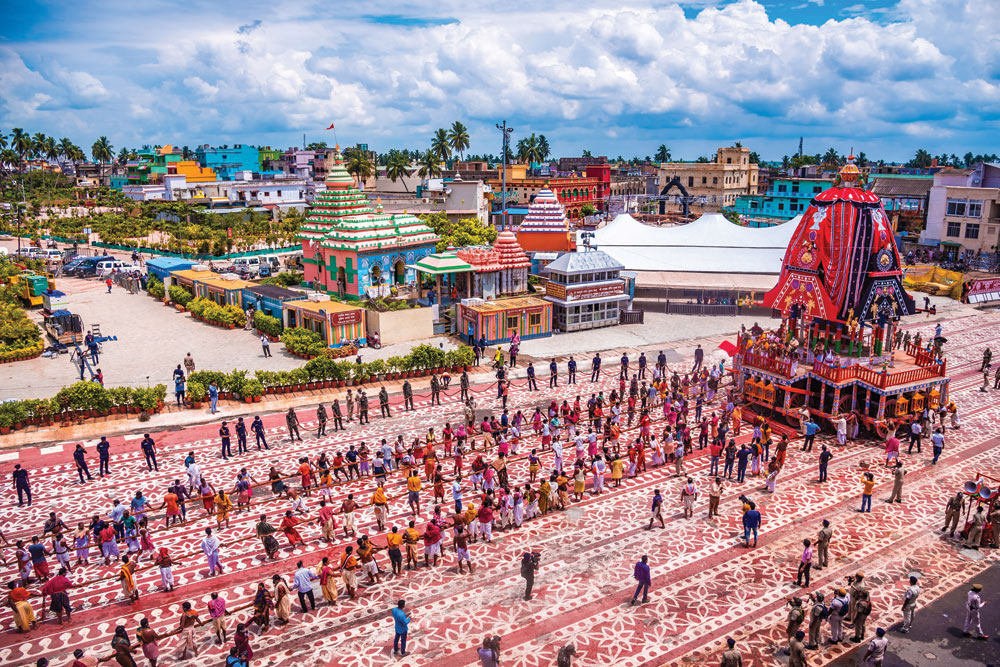 The Rath Yatra in Puri on July 12 (Photo: Dipu)


ON AUGUST 23RD, the Shree Jagannath Temple in Odisha’s Puri was reopened for pilgrims from everywhere after a gap of four months. A week earlier, it was opened for the people of Puri district alone. Now, any pilgrim from across India, on producing a recent negative Covid RT-PCR report or a certificate of full vaccination, can visit the temple.

But behind the opening of the temple is a fascinating story of how a team of administrators drew up a strategy that enabled a continuity of faith without compromising on Covid protocol. This strategy could provide a template for other religious places to follow without the danger of a Covid explosion.

Lord Jagannath is considered a living deity, and the temple forms one of the four important pilgrim destinations—the Char Dham—in Hinduism. The temple has about 4,000 servitors or sevaks. On any given day, more than a thousand of them are involved in elaborate rituals around the daily requirements of the Lord. There is a ritual for everything—from waking him up to dressing him up to his sleep to offering him betel nut. Once a year, in June or July, the Lord and his two siblings are taken on three chariots from their sanctorum to another temple, about three kilometres away, where they stay for a week or so and are then brought back to their place. This ceremony takes place in the form of the famous Rath Yatra, an event which has never been disrupted in the temple’s recorded history of hundreds of years. Normally, the chariots are pulled by pilgrims, whose numbers in pre-Covid times could touch 15 lakh.

But last year, as the world was reeling under Covid, the temple had to stay shut for nine months. On June 18th, 2020, the Supreme Court (SC) imposed a stay on the Rath Yatra, saying it could become a Covid spreader.

This created a crisis. The Rath Yatra is an emotional issue for the people of Odisha, especially for those in Puri and the servitors and their families. The state government had supported the SC stay as it feared that the event would become a super spreader. But the devotees, especially the servitors, were in no mood to listen to the government or the court order.

It is here that the chief administrator of the Shree Jagananath Temple Administration, Krishan Kumar, and his team stepped in. Puri was in lockdown; people who had been a part of the Yatra all their lives were crying about who was going to pull the Lord’s chariot in lockdown. “It was not jingoism but a matter of faith for an entire people. We decided that our conduct would be exemplary, but we would take out the Yatra,” Kumar tells Open.

It was a difficult time. The Tablighi Jamaat incident, where a congregation of the Islamic organisation in Delhi had come under immense Covid scrutiny, had happened just two months earlier. The fear was that the Rath Yatra would be seen as being facilitated by people who did not care about Covid.

At the last minute on the evening of June 22nd, the SC lifted its stay. The Yatra was to be allowed as the administrators assured the court that no public would be allowed. In the meantime, Kumar’s team had made preparations and had continued them. This enabled them to take out the Yatra. The same model was replicated this year as well. “As the SC order came, we all had tears in our eyes. In our minds we were clear that come what may, the Lord’s rituals would go on uninterrupted,” says Madhab Chandra Pujapanda, one of the members of the temple management committee.

How was it managed? To begin with, 200 workers involved in the making of the Rath were kept isolated at one place in what Kumar calls a bio bubble. These workers build the entire Rath from scratch. Nothing is imported from elsewhere—even the nails to fix the chariot wheels are made by these workers.


On the day of the Yatra, July 12th this year, the three chariots of the Lord and his two siblings were pulled by servitors, about 500 of them on each chariot. July is extremely hot and it was a herculean task for the servitors to pull these barefoot. On the way, glucose and electrolyte water were provided. It took the servitors about eight hours to pull the chariots. Even as water was being sprinkled on the road to ward off the heat, it made over 250 servitors bleed from their feet.

The entire town was under curfew. The district administration had done several meetings with the local people requesting their cooperation in this matter. “No public was allowed anywhere. We followed the Covid protocol in letter and spirit,” says Samarth Verma, Puri’s collector.

It was a tough job for the police as well. Normally, the challenge during the Yatra is to regulate the crowd so that there is no mishap. This time, the challenge was to ensure that there was nobody out on the road during the time the chariots undertook their journey. Along the route, the police had identified 75 bylanes from where people could pour onto the route. These were sealed. Two hundred and fifty rooftops were also identified where people could come out and policemen were deployed on each. Similarly, a meeting was held with 70 lodge owners in the area, urging them not to take in guests during the Yatra period.

“Imagine this challenge in terms of access control,” says Kanwar Vishal Singh, superintendent of police, Puri. “For, say, a prime minister’s rally, the brief would be to secure the dais and about 100 feet around it. In the Yatra’s case, this access control area became four kilometres long for us.”

In such circumstances, following guidelines goes beyond a simple law and order affair. “What do you do if a 90-year-old woman defies the restrictions? We cannot say that her devotion towards a deity is a crime,” says Singh. So, the administration told the people that the entire country was watching them. “We told them that any irresponsible behaviour on their part would bring a bad name to the Lord,” says Krishan Kumar.

The Rath Yatra has never been disrupted in the temple’s recorded history. The successful Puri strategy could provide a template for other religious places to follow without the danger of a Covid explosion

The efforts paid off. The local residents understood and followed the guidelines. The administration had requested people to watch the live telecast of the Yatra on TV instead of venturing out.

After the Yatra, all the servitors and officials involved were tested for Covid and then again 15 days after the completion of the event. Before the Yatra, RT-PCR tests were conducted on about 10,000 people, including the servitors and officials involved in the Yatra. “Last year, there was an adrenaline rush to conduct the Yatra. This year, we had more time and hence planned it more carefully,” says Kumar.

Due to the lockdown, the absence of pilgrims has meant a tough time for servitors and their families. The whole economy around the pilgrimage has crumbled. In view of this, the temple administration doubled the stipend provided to servitors involved in daily rituals of the Lord. “We must acknowledge their dedication towards Lord Jagannath. They don’t do it for any reward or salary. But we were aware that they also needed to run their families,” says Kumar.

On the day of the return journey of the deities, it poured heavily. Kumar and other officials accompanied the Yatra, barefooted, amid a rendering of the Gita Govinda. “It gave us a lot of strength, and this was the Lord’s wish,” says Pujapanda.