Creating Plays for the Screen

The stage logs in 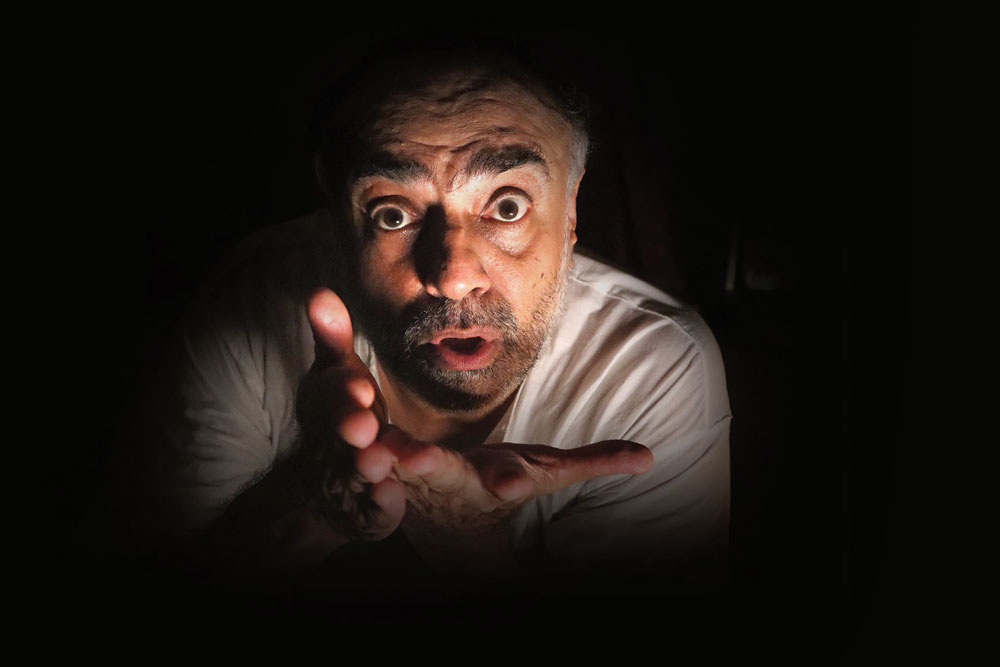 Rajit Kapur, actor, One on One—Unlocked


A NUMBER OF FACES populate the Zoom screen in front of you. You see their names and you see the trepidation. The host is genial and welcomes us to this new world, which reminds us of, if not replicates, a familiar setting. The host, an actor, starts with an introduction. Behind him are a cozy apartment, a bookshelf and a table. He is telling us a story of a young boy and his mother. Slowly, he begins talking about a list that he is populating, of every brilliant thing in the world, so as to bring joy into his mother’s life. This is a scene from the recent Mahindra Excellence in Theatre Awards-nominated play, ‘Every Brilliant Thing’, directed by Quasar Thakore-Padamsee of Mumbai-based QTP Productions and performed by Bengaluru-based actor Vivek Madan.

After having performed over 45 shows around the country, the lockdown caught them, like many others, mid-run. They had eight shows lined up, so they decided to reinvent the piece as a ticketed show on Zoom. Thakore-Padamsee is like many other theatre practitioners in the country who find joy and livelihood on the stage. The pandemic has restricted gatherings and has hit theatre hard and forced practitioners to look beyond the literal stage and explore the virtual medium for full-fledged performances.

When theatres shut down early in the lockdown, troupes in the country such as Delhi’s Asmita Theatre Group, Mumbai’s Akvarious Productions and Pune’s Aasakta Kalamanch began making recorded plays available online. It was a means to fill the gap before life returns to ‘normal’. “Once we knew this was going to be the situation for a long time, we had to find ways to work with a new medium,” says Rajit Kapur, Rage Theatre, Mumbai.


Once we knew this was going to be the situation for a long time, we had to find ways to work with a new medium, says Rajit Kapur, actor, One on One—Unlocked

Thakore-Padamsee had the advantage of working with a familiar text and a production that had seen its days on the stage. “We were trying to find solutions rather than reinventing the wheel. It was more productive that way,” he says confirming that 90 per cent of the script remained the same, save for a few changes that were made to fill in for audience interactions. For instance, Madan (the actor) would have to make do with his own sweater as opposed to asking an audience member for one. Centred on mental health, the solo show in its original form was interactive, with audience members often doubling up as characters and aiding the storyline. Online, this was achieved by providing viewers a detailed set of instructions before the performance. Yet, unreliable internet often forced the actor to jump in when there was silence at the other end.

Silence is what troubled Madan in the Zoom world. “In the stage show I can hear everybody else but here I can only hear myself for 85 per cent of the story. It made me interpret my own pauses differently. They weren’t as long as they were on stage. Longer silences made me nervous. A lot of unlearning needed to happen,” he explains. Then there were the mishaps that come with a live performance in a new medium: such as a neighbourhood dog barking in the background during a scene about a dog, an audience member logging in while driving.

The cast and crew were certain, they weren’t trying to replicate the offline experience. “Once you switch online, it stops being a play. The moment we acknowledge that we aren’t trying to stage anything, it became easier. It is a much nicer way to make the medium work. The moment you play to the camera, it seems forced,” says Thakore-Padamsee.

Madan and Thakore-Padamsee approached the medium with caution and late in the day. For Madan, the ‘live’ element is what remains crucial to theatre and Thakore-Padamsee’s concern was driven towards creating a sense of community that has come to be the hallmark of drama. “It is very different to watch something alone than with a roomful of people. We became very aware of that when we switched to the online medium. It is also what sets the medium apart from say cinema or OTT, theatre is a one-to-many experience while all others are one-to-one and actively work towards minimising distraction,” he says.

The performance was followed by a conversation with a mental health professional and audience members were encouraged to hang out after the show. “All that builds community rather than switching off right after,” Thakore-Padamsee explains.

IN APRIL, ANOTHER ticketed live performance, Kommune’s Lockdown Love, made it to our computer screens. Directed by Sheena Khalid, featuring actors such as Shriya Pilgaonkar and Priyanshu Painyuli, it was a take on modern-day arranged romances in the backdrop of the lockdown. “It was inspired by the sudden popularity of dating apps during isolations,” explains Khalid. Rehearsed over Zoom, the performance that was streamed live, was timely, contextual and interactive. “The audience got to play cupid and there was a lot of improvisation,” Khalid says.

Khalid insists that treating the online space as a new medium is important while also acknowledging its limitations. “It’s not a hybrid of the theatre stage and film. It is a medium unto itself and must be treated that way. And the reality of being on the internet cannot be ignored. We have terrible internet speeds and lags and there’s no point trying to hide it,” she says adding, “If anything, an interactive performance is closest to the experience of gaming.”

Director, writer and critic, Vikram Phukan, who worked on two pieces, released online in June, agrees adding that trying to find traces of the stage experience online is futile and that the medium must be viewed as a new one. Both performances, ‘No Spring Chicken’ (for British Council India) and ‘FirstAct’ (for FirstPost) were released as recordings and not live material. “We didn’t want to take the risk of a live performance with electricity going off. The adrenaline you have as a performer and as an audience member during a live performance is absent. It is in essence, a different kind of spectatorship,” he says.

These plays were also set in the lockdown context and the Zoom environment was an integral part of the stories. Phukan says that there’d be little difference in the script if it had been written for stage. However, it was the rehearsals that Phukan found more challenging. “When you are working together, you form different dynamics with each other and the director. In Zoom it is a single room. For instance, I can’t take an actor aside for a conversation. Everyone is working together all the time,” he says.

‘One on One—Unlocked’ by Rage Productions, a series of 10 monologues, written during lockdown, premiered on August 14th on Insider as part of Front and Back, their recent live theatre property. Featuring several big names from the theatre fraternity including Rajit Kapur, Aahana Kumra, Abhishek Majumdar, Anu Menon, Seema Biswas and Neil Bhoopalam, it attempted to recreate the stage experience online, through single cameras and a single take. The recorded show (available until September 13th) consists of nugget-size stories that delve into the complexities of isolation and its impact on the protagonists.

Kapur, who isn’t a fan of creating work online, wanted to keep it simple. “We wanted to be true to theatre: one camera, one shot, one actor was the brief. And we chose to record the performance for technical reasons,” he says. While he admits the process and writing were seamless, rehearsals weren’t quite the same. “How does a director rehearse with his/her actors? The rehearsal had to be done without being in the same space, over video calls and phone cameras,” he recounts.

AKARSH KHURANA of Akvarious Productions chose to record his productions for similar reasons. Having created a whole new platform for live interactions, Akvarious Live on Instagram, Khurana has hosted several talks, storytelling sessions and solo acts through the lockdown. “We had decided that every month, we will try and create one formal performance,” he says. First came ‘Bubbles’, a play designed for the online medium where every dialogue was a social media post. “We realised that we enjoyed the process and brought back an older play, ‘Love Bombs and Apples’, to the online format,” he says.

Here I can only hear myself for 85 per cent of the story. It made me interpret my own pauses differently. A lot of unlearning needed to happen, says Vivek Madan actor, Every Brilliant Thing

A lot of the rehearsal process, he explains, involved finding the right location and backdrops at home and working with limited resources. Khurana recently released Timeloss, based on an Iranian play byAmir Reza Koohestani, featuring actors such as Shweta Tripathi and Dilshad Edibam Khurana. “It’s a hybrid between theatre and a short film. It tells the story of a couple that comes together, 10 years after acting in a film for the dubbing for an unexpected release. It’s like a relationship study,” he tells us.

Akvarious Productions marks 20 years in theatre this December and Khurana believes the virtual medium will be crucial to marking this celebration. “While it was a stopgap arrangement initially, it might become a larger part of our lives and may actually stay. It might be possible to watch a play without having to wade through traffic,” he says, admitting that it comes with its share of restrictions in terms of cast size and production design.

Phukan too, believes that the virtual medium might actually offer an alternative space for plays in the absence of available venues. “The online space is democratic. Anyone can put up a performance. The theatre was restricted by numbers and their own programming. It might be something that continues once theatres open up too. While I don’t see premieres happening online, it could be something that groups will consider offering additionally,” he says.