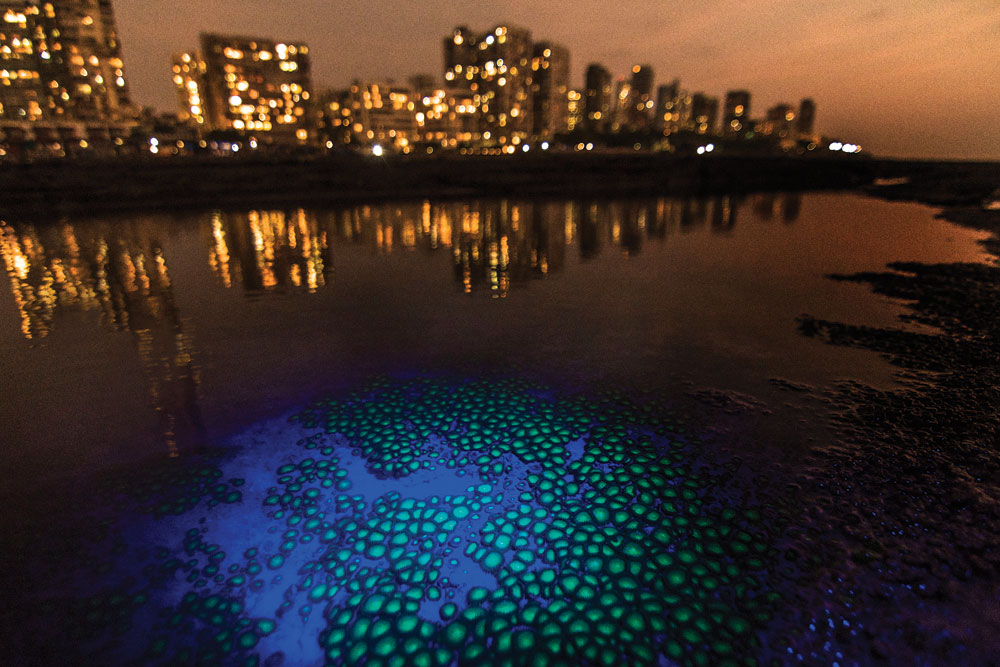 
LAST YEAR, A SMALL group of coral colonies in Mumbai came in the way of the city’s Coastal Road project. When the Bombay High Court put the project on hold, one of the reasons cited was the presence of these corals.

Corals are living organisms and, in India, protected like the tiger or the elephant under Schedule I of the Wildlife Protection Act (WPA), 1972. The discovery of these tiny colonies of corals had helped stall this mega urban project, estimated to cost Rs 12,700 crore, stretching about 10.5 kilometres from one part of the city to another and considered crucial for Mumbai’s connectivity. These delicate organisms that had survived the pressures of the megalopolis, activists told us, may not survive the Coastal Road. And the court seemed to agree. It asked the state to seek permissions under the WPA.

For the past one week, once early in the morning and later sometime in the evening, when the tide along Mumbai’s coastline was low, a group of some 30 individuals walked into the water at the two sites in question, Haji Ali and Worli, their pants rolled up, some of them carrying crates filled with sea water in their hands. They were going to move these corals.

Late last year, the Supreme Court had lifted the stay order. And just last month, much to the chagrin of several activists, permissions to move these corals came through. These individuals picked entire boulders with coral at one site and, using a hammer and chisel, cut out parts of rocks with corals at another. Later, they were packed inside crates, loaded on a truck, and taken to another spot where, stuck with cement and some other adhesive material on rocks, it is hoped they will grow.

“We are quite confident. It went well and they should survive,” says Virendra Tiwari, the additional principal chief conservator of forest (mangrove cell), who is monitoring this project.

Such translocating or transplanting of corals has begun across the world. Marine conservationists use it to protect the health of coral reefs and colonies under the stress of climate change and excessive human activity. Just two years ago, for example, after the Great Barrier Reef experienced back-to-back periods of elevated sea temperatures in 2016 and 2017, resulting in the death, it is believed, of nearly a third of all the reef’s coral, scientists successfully transplanted nursery-grown coral fragments onto the reef. What is rare though about this translocation project underway in Mumbai is that it is being undertaken to facilitate an urban construction project.

This also comes at a time when, like the rest of the world, even across the Indian coastline, several groups of individuals have begun to adopt this method.

It was in the Andamans, when she dove into the depths of the sea, that Nayantara Jain, then working as a scuba diving instructor, began to witness the effects of climate change. Sea temperatures were rising rapidly and, in front of her, corals bleached and died. It convinced her, she says, to become involved in marine conservation. “As an instructor I was always there in the water. And this (experience of witnessing the effects of climate change) touched me deeply,” she says.

Over the years, as the executive director of ReefWatch Marine Conservation, Jain has been undertaking various marine conservation activities. Three years ago, she and her colleagues began a new pilot project. They were going to use the coral transplant method to build an artificial coral reef.

Jain and her colleagues would collect naturally broken coral fragments, which would have otherwise died, and tie them to a metal frame. They also became the first in the country to use a mineral accretion method, she says, where a low-voltage electric current from floating solar panels above would be passed through this frame. This electric charge is believed to make the water more alkaline, aiding in the formation of calcium carbonate, which is what coral polyps try to create in order to grow.


The group has built nine such artificial structures totalling an area of about 20 square metres. This is the extent of space for which they were granted permission. With the success of their project, where not only have the corals grown but marine life around them appears to have developed as well, Jain hopes they will be able to further expand it. Seeing their success, other groups have also begun to adopt these methods. Jain has also begun conducting workshops for local forest officials to help them start their own coral restoration project.

“You have to do these things (coral restoration) now because corals are going through repeat stressor events, and they aren’t getting enough time to recover between these stressor events,” she says.

Transplanting of corals has begun across the world. Marine conservationists use it to protect the health of coral reefs and colonies under the stress of climate change and human activity

CORALS ARE HARDY organisms. They have been around for thousands of years and are capable of recovering naturally. But the heavy hand of climate change is forcing conservationists to intervene. On India’s coastline, there are several projects underway using such transplant methods, from the Andamans and the Lakshadweep islands to the coasts of Gujarat, Tamil Nadu, Goa and near Mumbai in Maharashtra’s Sindhudurg area.

On Gujarat’s Mithapur coast, where the Wildlife Trust of India has been carrying on a long-running coral restoration project, some years ago they even managed to successfully re-introduce two Acropora species of corals that had gone extinct from the area’s reef. This was done by taking live coral polyps not from a nearby site, as happens frequently with most coral transplants, but, for the first time in the country, hundreds of kilometres away from Lakshadweep.

A similar type of transplant, over an equally large distance, is what Deepak Apte thinks could hold the key to the survival of Lakshadweep’s coral reef.

Apte is the director of the Bombay Natural History Society, Mumbai’s well-known wildlife research organisation. Last year, as part of a group of researchers, he published a study, carried out over 14 years, which revealed the extent of the threat to Lakshadweep’s coral reef.

The researchers used a species of giant clams in Lakshadweep known as Tridacna maxima, known to have a higher threshold for elevated sea temperatures than corals, as a surrogate for the coral reef.
During the period of the study, ‘bleaching’ events were observed twice, once in 2010 and again in 2016. Bleaching is the process when, under the impact of elevated temperature, corals begin to lose their colourful algae which nourish them, leading ultimately to their death. Apte and his colleagues observed that after a period of stable increase in the density of the giant clams between 2004 and 2010, they declined immediately after the bleaching incident in 2010, followed by a period of stable decline until the next bleaching event (in 2016), when the density saw a further rapid decline.

If this was happening to the giant clams, something similar must have been going on with Lakshadweep’s coral reefs.

Since the corals of Lakshadweep reach their thermal maxima, the threshold after which they begin bleaching between 28.5 to 29.5 degrees Celsius, Apte points out that coral restoration work must be undertaken keeping in mind the latest research. “If thermal maxima is a reality, and this may happen over the course of the next 10 to 15 years, then we need to look at (coral) reef management very differently,” he says.

One of the suggestions offered by Apte is transplanting corals from the warmer waters of the Gulf of Kutch, where they have been naturally exposed to temperatures of 40 degrees Celsius, to Lakshadweep’s reef which is struggling to combat high temperatures. “Of course we need to study this properly before we do such a thing, to ensure we don’t end up introducing pathogens and diseases. But if it is found okay, perhaps there lies the answer to our problems,” he says.

This method is still in its nascent stage globally and it has its naysayers. But many have begun to look at this more seriously. If corals that have naturally adapted to extreme climate can be successfully transplanted—or at least if their critical heat-withstanding genes can be transplanted—to our vulnerable reefs, perhaps this can help avert the catastrophe many believe is waiting to happen.

“We are at that stage right now where we really need to look at such interventions,” Apte says, who has submitted a proposal to conduct a study on the feasibility of such a transplant to the government.

In Mumbai, the translocation of the corals is much simpler in comparison. There were just 18 colonies originally, about nearly 3 square feet in Worli and about 1.1 square foot in Haji Ali. While the corals at Haji Ali have been moved to another spot, in South Mumbai’s Navy Nagar region, the ones at Worli have been moved just a little distance away.

But the entire undertaking has been conducted under a fierce glare. Many activists have complained that the corals may not survive this relocation.

Even Jain from ReefWatch mentions that translocation of corals cannot be the first choice of action when an infrastructure construction is proposed. “You cannot use it (this method of translocation) as a free pass. Even when it (translocation) is done it needs expert care and management to ensure that it survives,” she says. “When we do our restoration, for instance, we always put the (coral) fragments within a 100-metre radius of where we found it.”

There are others who stress that the infrastructure project is too crucial to be cancelled for a few colonies of corals. “These corals or at least most of it should survive the movement. Besides, you’ll find these types of corals everywhere. There is nothing unique or distinct about them,” says a marine biologist who has spent several years studying corals. “The problem is that it is all a smokescreen. It is great; people are coming together and uniting over something. But here we go on talking about a few colonies of corals. While nobody is talking about what is happening in Lakshadweep, or the Andaman and Nicobar islands, where our 1,000-square metre reefs are reaching their thermal threshold.”

HARSHAL KARVE, A marine biologist appointed by the state’s mangrove cell to oversee the translocation process in Mumbai, has spent the last few days at the two sites observing the work underway. While the work went on smoothly, there were a few challenges, such as the possible discovery of a few more coral colonies than had been surveyed before (although this has to be confirmed by the National Institute of Oceanography team tasked with this project later). During the first two days, the weather held up well and the water remained low for the team to spot the corals. So even when the water became a bit higher and rougher on the third, Karve says, it posed no problems.

As someone interested in corals, Karve has been curious about what impact all this chipping and lifting of the host boulders will have on these small organisms.

A few days ago, he looked into a crate and took a photograph to see if they exhibited any sign of stress. “But there were no such signs at all,” he says. “I think they will survive.”