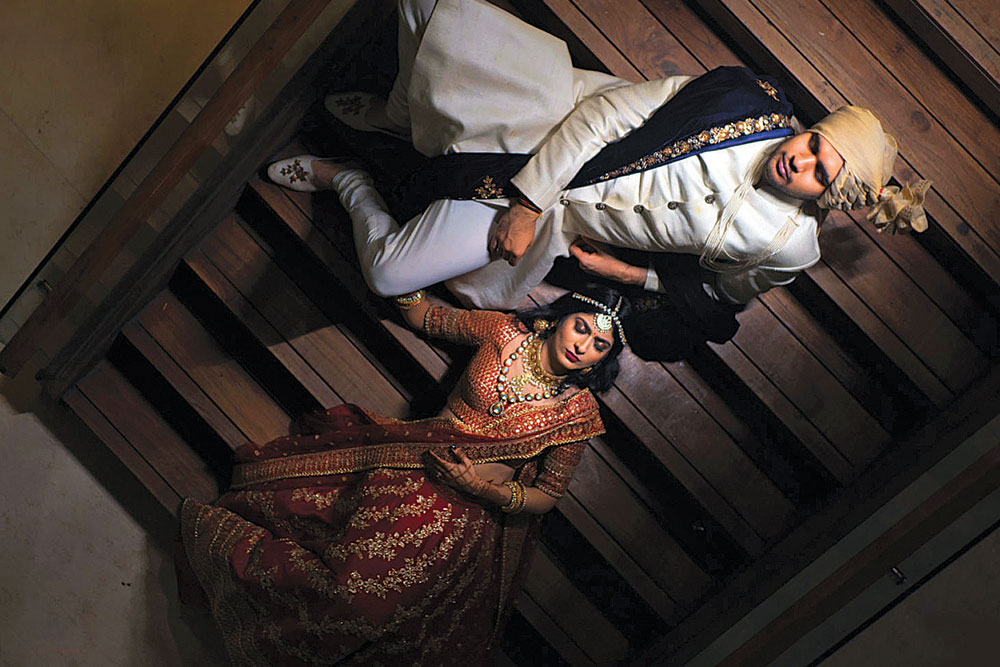 A scene from The Big Day


ALLOW ME TO express a very Delhi sentiment: I spotted several acquaintances in Netflix’s The Big Day, a six-part documentary series which released in February. Produced by Condé Nast India, the first three episodes (the other half hasn’t been released yet) featured three Indian or NRI couples as they planned and realised their dream weddings. This isn’t unworthy of attention by itself—amidst a sea of people dressed to the nines, amidst the obvious, never-ending opulence why did these particular wedding guests (none of whom have speaking parts in The Big Day) catch my eye, even if I had met them only a couple of times? The answer was, of course, because I had literally nothing in common with anybody else on display. The mind’s eye leaps at connections. When we see a half-finished image of a face, we ‘complete’ the drawing inside our heads, a ‘like-me’ object emerges from the ‘not-me’ world.

For the overwhelming majority of viewers, therefore, The Big Day will play a bit like a nature documentary where David Attenborough is taking us through the idiosyncrasies of the super-rich. (I imagine it as, ‘The male of the species is saying he wants Bollywood impersonators to perform at the mehendi; the female grunts her approval.’) An NRI bride named Nikhita Iyar, wanting a ‘Buddha Bar’ theme, has a larger-than-life-size Buddha statue erected at the venue’s entrance. In an elaborate outdoorsy mehendi, Iyar also commissions decorations modelled on The Secret Garden, Frances Hodgson Burnett’s 1911 children’s novel, plus a section resembling a movie set from Indiana Jones and the Temple of Doom. Elsewhere, Terence Lewis (veteran Bollywood choreographer) and his troupe dance to the title track of Dhoom and a white guest squeals: ‘‘It’s like I’m living a Bollywood movie from the inside!”

After scoring a massive hit last year with its reality series Indian Matchmaking, Netflix is clearly placing a large bet on Indian wedding programming. Stands to reason, for many Bollywood stars today have a recent ‘wedding film’ on their resumes. Think of Veere Di Wedding (2018) or in the OTT space, shows like Made in Heaven (2019) and Bang Baaja Baaraat (2015). Reality shows like Indian Matchmaking and The Big Day represent the next stage in this trend: no longer content with make-believe weddings featuring marquee movie stars, audiences are now looking to live vicariously through real-life ‘dream weddings’.


Indian Matchmaking, one of the most talked-about Netflix shows of 2020 (it hit the top 10 in both India and America), was timed well. Created by Indian-American filmmaker Smriti Mundhra (who also served as executive producer), this eight-part docu-series was released on July 16, 2020, when large parts of India were still under lockdown.

Indian Matchmaking followed the Mumbai-based professional matchmaker Sima Taparia as she sets about finding matches for a largely NRI clientele: some of the most popular ones one were Houston-based lawyer Aparna Shewakramani (34), New Jersey-based Guyanese event planner Nadia Jagessar (33) and Akshay Jakhete (25), a Mumbai-based businessman. And for all the ‘Aparna vs Nadia’ tweets and memes, Taparia is the showstopper as far as Indian Matchmaking is concerned, as the gregarious, flawed, judgmental, endlessly fascinating character. Shortly after the show’s release, even Shaadi.com honoured her with an advertisement that claimed, ‘Hamaare paas profiles ki koi ‘Sima’ nahi hai’ or ‘We have a limitless supply of profiles’ (‘sima’ means ‘limit’ in Hindi).

Imagine a formidable Wodehousian aunt (like Bertie Wooster’s Aunt Dahlia) with additional, typically Indian super powers. Like being able to describe a prospective groom’s ‘lifestyle choices’ (and the size/location of his Mumbai flat) after just a few cursory exchanges, or the ability to persuade the most progressive families that ‘a little compromise’ is essential for marital bliss. The benevolent dictator of Indian Matchmaking, Taparia dispenses nuggets of wisdom that steer her clients towards their fates—this one’s not fair enough, that one’s a loser (a writer), her family belongs to the wrong caste and so on. These biases aren’t investigated because Indian Matchmaking is not that kind of show — like The Big Day, it is interested in relentless voyeurism above all else.

Throughout the show, I got the nagging sense that at some level Taparia was in on the joke, that she understood the over-the-top tonality Mundhra wanted with Indian Matchmaking, the stuff of the ‘hate-watch’, the ‘so-bad-it’s-good’ subgenre of TV.

This suspicion is further strengthened when you watch A Suitable Girl, a 2017 documentary directed by Mundhra (also on Netflix), where Taparia is in a bit of a ‘supporting role’; she’s the mother of one of the three about-to-be-married young women being profiled. The crux of this no-nonsense, almost sombre documentary is the curtailing of young women’s freedoms after marriage. Taparia’s exaggerated mannerisms and accent etcetera are noticeably toned down here, to match the tone of the film. She is not nearly as loud or as brusque or as quick to dismiss potential matches as she is in Indian Matchmaking.

One of the big reasons why A Suitable Girl works as a documentary is that the three women profiled belong to very different worlds. Dipti, a lower-middle-class teacher who lives with her parents in Bhayandar (a suburb to the north of Mumbai) is being rejected by one boy after another—she happens to be dark-skinned and not “slim, trim and fair”, Taparia’s go-to line to describe the ideal bride’s physicality. The Delhi-based Amrita, the first person in her family to get a corporate job, is about to give up her career and her city to marry her high school sweetheart. She knows that her in-laws (who live in Nokha, Rajasthan) won’t allow her to work in an office after marriage—at best, she can join them in their family business but as the film progresses, we realise that even this is a far-fetched suggestion by this family’s standards. And finally, we have Taparia’s own daughter Ritu, who doesn’t get the fuss about marriage at all (a side effect of living with her matchmaking mother, perchance?) but agrees to an arranged marriage out of a sense of duty and pragmatism (“I know what I’m supposed to do,” she keeps saying at one point, as though she needed the reminder more than the audience).

THE BIG DAY works best when it sticks to its lane—being a glitzy, tastefully shot, well-edited advertisement for India’s billion-dollar wedding industry. Condé Nast, after all, publishes glossy magazines whose business model is designed to solicit ad revenues from luxury brands. The Big Day is the video equivalent of this phenomenon. The first episode fits this bill perfectly. But for some reason, the second and third episodes try painfully (some might say, laughably) hard to characterise the couples therein as crusaders for social justice. But social justice is not what they are batting for; they simply want a wedding of their choice.

When a super-rich Hindu woman marries a super-rich Hindu man, it doesn’t really matter if they’re subverting the ‘kanyadaan’ ritual or not. In the larger scheme of things, this ‘elite union’ will do nothing to challenge class or caste endogamy; you don’t need to be a sociologist to understand this self-evident truth. And yet, the show treats Pallavi and Rajat (through no fault of theirs) like heroic reformers, for some reason, because they matched the ‘kanyadaan’ with a reciprocal ceremony where the groom was ‘given’ away by his parents.

Consider, also, how we’re introduced to Ami Pandya, one of the brides featured in the second episode. Everything about her is presented to us in the ‘girlboss’ aesthetic. ‘Girlboss’, popularised by Nasty Gal founder Sophia Amoruso, used to mean a confident, self-made woman, especially in the corporate world. However, after non-white commentators realised that this corporate brand of feminism translates to ‘more white women’, ‘girlboss’ became more of an insult and less of a compliment.

And so we have Pandya, whose friends describe her again and again as a “Type A” person. Corporate references are dropped ad nauseam. “She will not talk to you if you don’t send her an Excel sheet,” her wedding planner says while gushing. “She is very anal” (exactly what is so desirable about this trait is unclear). A little later, on the day of the wedding itself, Pandya sends her family into a panic by announcing that her makeup is done and she’s ready for her grand entrance— about 90 minutes before she was actually ready. “It’s just to create the stress,” Ami explains. “So that the team creates perfection. And when you walk in, it’s just like, ‘Fuck everything, let’s just have fun.’ But that pressure creates an environment where they deliver better. When I called my Dad I hadn’t even started my make-up, actually. I’m building pressure so that the deliverable is ready.”

‘Team’, ‘pressure’ and ‘deliverable’ would be part of most corporate word clouds, but it’s odd to see this vocabulary being deployed, sans irony, in the context of an Indian wedding. To me it seems like tone-deafness, even if the fact that the dulhan is (finally) calling the shots, is a pleasant change. But clearly the proliferation of wedding reality shows proves that the fetishisation of the Indian wedding is here to stay.