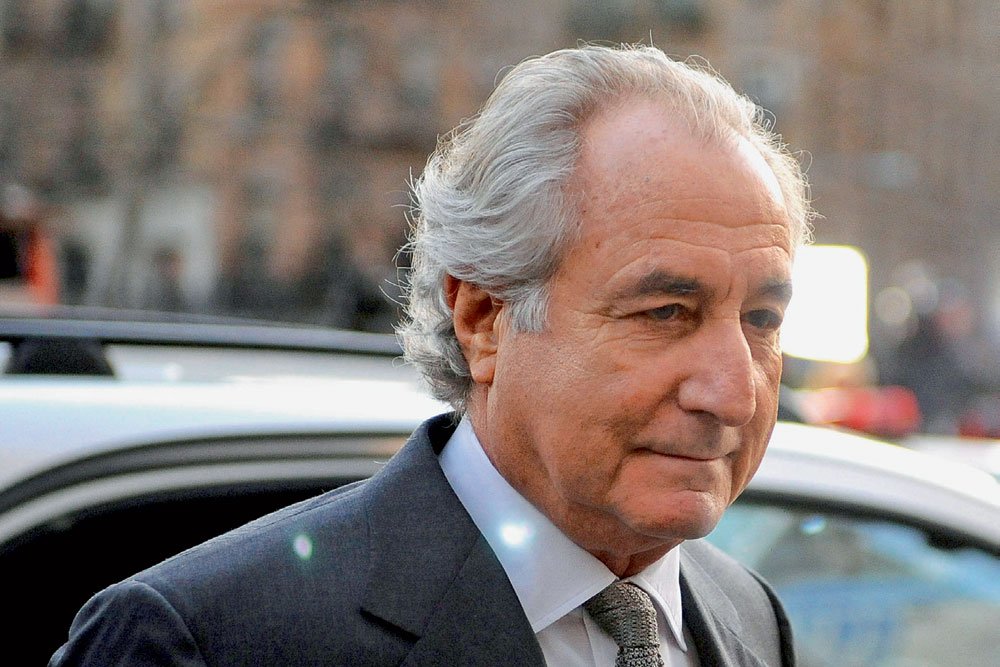 
THE SHOCK OF the 2007-2008 financial crisis hadn’t yet settled when, by the end of 2008, another emerged. One of Wall Street’s most respected names had been caught running the largest ponzi scheme in history. The architect of what has been dubbed the ‘con of the century’, Bernard (Bernie) Madoff, died a few days earlier in prison.

The reason why the news created such shock was not merely because of the scale of the fraud, or the many years it had carried on for, but because of the reputation of the man at the centre of it. Madoff was one of Wall Street’s biggest players. He was an investment guru. He had chaired the Nasdaq stock exchange, advised the US government on financial matters, and was known to be a generous philanthropist. In hindsight, it became clear that only a man who built such reservoirs of trust could have pulled off such a fraud.

Madoff may be inextricably linked to the 2007-2008 financial meltdown, but his was not a fraud committed through complex financial moves. It was plain old swindling. Once he confessed to his sons, who in turn informed the authorities, and regulators began investigating his investment firm, most of the investment assets, it was found, really existed only on paper. There was no real investment. It had all been one large pyramid scheme, the money from new investors having been used to pay the old. It is estimated that in all, he committed a fraud worth $20 billion in actual original investments and $65 billion in recorded paper wealth.

His victims included Hollywood celebrities, businessmen, a Holocaust survivor and Nobel Prize winner, banks, institutional investors and financial pros, many of them people who should have been able to see through Madoff but didn’t, and also ordinary citizens. Very few questioned him. The returns he generated, while not outlandish, somewhere in the 10 to 12 per cent range, were always steady irrespective of how volatile the market was. There was an air of exclusivity about investing through him. He reportedly turned away many investors, and this made him and his services all the more desirable.

The fraud, he claimed, started in the early 1990s—but many believe it had begun much earlier, maybe even in the 1970s—with Madoff first scamming friends and acquaintances in Manhattan and Long Island, but it kept growing across the US and in Europe, South America and Asia. He was able to steer it undetected through the financial crises of the 1990s, and the aftermath of 9/11, but it couldn’t go on beyond the 2008 recession. Just too many wanted out and very few in. “When I began the ponzi scheme, I believed it would end shortly and I would be able to extricate myself and my clients from the scheme. However, this proved difficult, and ultimately impossible, and as the years went by, I realised that my arrest and this day would inevitably come,” Madoff is reported to have said during the time of pleading guilty.

Madoff had a somewhat rags-to-riches story. Born in New York to Jewish immigrants from Eastern Europe, his father reportedly tried his hand at many small business ventures, most of which failed. In his youth, Madoff worked as a lifeguard and installed sprinkler systems, keeping money aside to start an investment firm.
Although many have wondered if more people apart from Madoff weren’t connected to the fraud—many in particular being suspicious of Madoff’s immediate family—the aftermath of the scam’s revelations have been hard for the family. Madoff’s wife Ruth, who had once admitted that the two had attempted suicide when Madoff was under house arrest, is believed to have ended all communication with him. One son, Mark, hanged himself two years later. Another son, Andrew, died of cancer in 2014.

Madoff reportedly suffered a heart attack in prison in 2013. He sought compassionate release last year claiming he was suffering from end-stage renal disease. ‘…I just made a mistake at one point, and I didn’t realise at the time that I wouldn’t be able to get myself out of it,’ he told the Washington Post over phone then. ‘…I had no idea that it would evolve the way it did. And I just couldn’t help it.’ The request was turned down. There was no way a man who had committed the largest financial fraud in modern time was going to be let off.