As schools gradually reopen across the country, a new challenge emerges—how do you ensure students return? 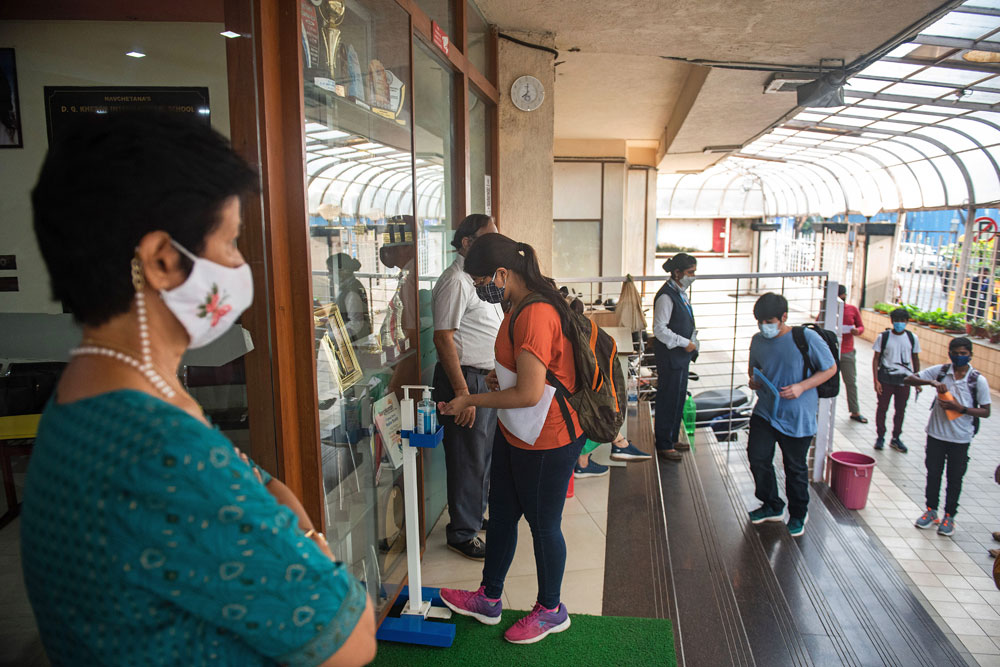 A school reopens in Mumbai on October 4 (Photo: Getty Images)


FEW WEEKS AGO, when the Maharashtra government announced that schools would finally reopen for higher classes across the state, confusion spread through the Khan household. Rehmat Khan, who lives with her husband and two children in a small house in Mumbai’s Juhu area, was certain she would not allow her elder daughter to return to school. Online classes, while not ideal, were progressing smoothly on tablets provided by the school. And she, along with her husband, saw no reason to risk their daughter’s safety by sending her to school while news of an impending third wave still did the rounds.

But Mehraj Khan, a bright young girl at the government-run DN Mumbai Public School, convinced them to change their mind. “Bhaiya, our online classes have been very good, and the teachers are great too, but it is still nothing like attending a physical school,” says Mehraj, who entered her 10th standard this year. “So, I explained to my parents that it is much safer now, and for my studies, it is essential I go back to school.” Mehraj had it comparatively easy. Nearly two years since schools were first shut (a few briefly reopened before the second wave hit the country), teachers and heads of schools face a new challenge: getting students back to school.

For the last few weeks, as the likelihood of the reopening in Maharashtra grew, social workers from Akanksha Foundation, a non-profit education organisation, have been fanning out across Mumbai and Pune’s many lanes, knocking on the doors of children enrolled in the foundation’s supported schools. The NGO—which through a public-private partnership model runs 27 government schools across Pune, Mumbai and Nagpur—works primarily with children of working class parents. It had been conducting classes online ever since the pandemic broke. Now, it has been contacting parents, sometimes with social workers visiting them, convincing them to send their kids back to school.

“There has been a huge problem of children dropping out in government schools, in cities and in rural areas across the country,” says Saurabh Taneja, CEO of Akanksha Foundation. “Thankfully, with Akanksha schools that has not been one of our big concerns. Many of my friends working in this field tell me that in many cases children have dropped out and begun working. And once you become an earning member, it becomes really hard to return to school.”

The foundation ensured it did not lose touch with its students, even those who had returned with their parents to their native villages and cities and did not attend online classes. The teachers would contact them at least once a week, over phone or through WhatsApp, ensuring in Taneja’s words, a connection and an emotional pull to the school even over a period of nearly two years, so that on reopening, they would return to it. Even for parents who lost their jobs during the pandemic and returned to their native towns and villages, education for their children becomes an incentive to return, says Taneja.

According to a survey conducted by the foundation among parents whose children studied in the foundation-supported schools a little over a month ago, about 75 per cent of them were keen that their children go to school. “We are now hoping around 80 per cent will send their children,” Taneja says. “We are in touch with around 90 per cent of all our children. But that is all based on phone calls and Zoom [classes]. The reality will hit when we reopen.”

The prolonged closure of schools has had a disastrous effect on education. Online education remains a privilege in India, where only one in four children has access to the internet and digital devices, according to UNICEF. The virtual classroom has deepened existing inequities. Children from more privileged backgrounds have, with access to smartphones and laptops, continued their learning with minimal disruption, but the rest have suffered. According to a survey, supervised by a group of leading economists, of nearly 1,400 school children from underprivileged households across India in August, in rural areas, only 8 per cent of the children sampled were studying online regularly and 37 per cent were not studying at all (these numbers remained dismal even in the cities, rising to 24 per cent and 19 per cent, respectively). About half of them were unable to read more than a few words. The reasons for their poor schooling ranged from not owning smartphones, poor mobile connectivity or the inability to pay for it, to schools not sending study material and online education being too hard to grasp for some. “The picture that emerges from the survey is absolutely dismal, especially in rural areas,” the authors write in the study.

Another survey of over 16,000 children in primary classes across public schools in five states (conducted in January by the Azim Premji University) found staggering levels of learning loss. Researchers found that 92 per cent of the children had lost crucial language skills, like being able to describe a picture or write simple sentences. An equally significant segment (82 per cent) had lost basic maths skills that they had learned the previous year.

“There has been a massive learning loss. So many kids have forgotten to do basic multiplication and division in grade seventh. Years of effort have just vanished,” says Taneja. According to him, not just an overall enormous learning deficit, there are also going to be children at different levels of deficit within the same classroom. “The big challenge when classes resume is going to be how we create a learning environment where all kids are learning at their different levels and not being taught a common chapter or content for the whole classroom,” he says. According to him, rather than trying to pick up where schools left off, teachers will now have to help students master basic skills again before trying to push ahead with the school curriculum.

So far, according to media reports, across states, attendance levels in schools that have reopened have tended to be comparatively higher in government schools than private ones. Many parents whose children go to such private schools have wanted to keep their children home out of fear of them contracting the virus and since their schools have managed to transition to an online medium of education more successfully.

Anubha Srivastava Sahai, a Mumbai-based lawyer and mother of two schoolchildren, is one such parent. Sahai, who also heads an informal but large and vocal network of parents across the country called India Wide Parents Association, is certain that she will not send her children to school until they are vaccinated. While her daughter in the seventh grade has agreed, her elder son in the eleventh grade wants to return. “But the pandemic is not over and health is most important,” she says. Like many parents, she fears the resumption of social and economic activities and the reopening of schools could fuel a third wave. “Most classes are small rooms with little ventilation. The transport to and from schools is an issue. Most governments haven’t been very transparent about how many teachers have been vaccinated. How do we send our children in such conditions?” she asks. While most states have made attendance voluntary for the moment, according to her, many schools are already pushing children to return to physical classes because a hybrid model (where some attend school online and others come to a physical classroom) will be difficult to pull off in the long run.

According to Madhu Singh, the principal of Billabong High International School in Mumbai’s Malad area, it all boils down to trust. “People have to trust the school. Schools must reopen. Isn’t everyone going out now, to malls, to the market? Aren’t people interacting with others?” she asks. The pandemic may have taught us that education can be done online but it has also shown that a school is more than just a place of learning. “You cannot replicate the emotional and social connection of a physical school online,” she says.

Many schools have put in place various protocols. At Billabong High International School, which will reopen about a week later, school will now close at 12.30PM, thereby avoiding lunch breaks when students would have most intermingled. Also, classrooms will be spread out across the nine-storeyed building and breaks between classes will be staggered so children do not use the washroom at the same time. In Pune’s EuroSchool in the Undri area, like most other schools, school grounds are out of bounds, sport activities for the moment done away with, and there are now floor markings in common areas such as the washroom so students’ interactions are kept minimal outside the classroom.

Occasionally, students from Class 10, especially those with special needs, had been coming to EuroSchool’s premises to clear doubts and get some assistance. During those moments, Seema Bahukhandi, the principal of the school, describes how there is an uplift in the mood throughout the school’s premises. Just the other day, two children from standard 4th and 5th who had won inter-school competitions and had been given the option of being felicitated at school, had turned up. “We showed them their classroom and they were so thrilled,” Bahukhandi says. “Two years is a long time. Think of children in lower classes who have never been to a classroom and whose foundational years are now being spent outside the classroom. I think schools across age groups must resume now.” Her counterpart in Mumbai, Madhu Singh, says it isn’t just kids who are missing school.

“I really miss the noise. The loud good mornings you hear every day,” she says. “A silent school is no school.”