Aung San Suu Kyi: The Evolution of an Icon

She has been made an outcast again 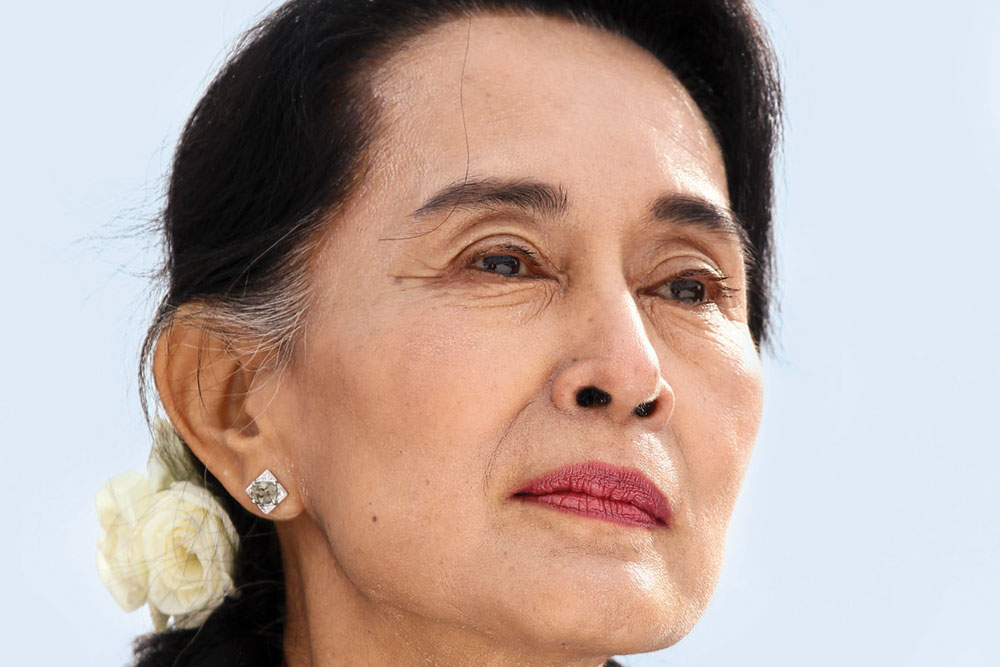 
ON DECEMBER 6TH, a Myanmar court announced the first verdict on the many charges brought against Aung San Suu Kyi since she was ousted from power by the military, and on expected lines, found her guilty. She was sentenced to four years (on charges of inciting unrest and breaking Covid-19 rules). But almost immediately, the reigning military junta reduced it to two years. This reduction really doesn’t mean much, since she has been charged with a total of 11 charges that add up to combined maximum sentences of more than 100 years, effectively taking the 76-year-old—as the junta’s critics have been pointing out all this while—out of active political life.

The judgment—in a trial which has been described as a “theatre of the absurd” by Tom Andrew, the UN special rapporteur for human rights in Myanmar—is the first rub of varnish that covers the junta’s true intention: keeping Suu Kyi out of politics at all cost. Even if she were to be cleared of all of them, which range from the trivial (illegal possession of walkie-talkies) to the serious (corruption and breaking the official secrets law), one can be certain that more charges will be drummed up. So long as the generals remain in control, Suu Kyi, it appears, will spend the rest of her life in prison.

If this were to be the start of the end of Suu Kyi’s political career, with a new democratic resistance emerging that doesn’t necessarily look at her as its symbolic core, it brings to a close a brief democratic interlude in Myanmar’s contemporary political history, one that began with so much promise in Suu Kyi’s inspiring rise to power. Much was expected when she was released from detention after about 15 years and then came to power in 2015. But the constitution, which while it abolished military rule maintained a huge amount of power and influence for the generals, and her conduct when in power, most prominently in defending the military’s atrocities against Rohingya Muslims, found her both with little democratic legroom within the country while also losing face internationally. She was expected to fix one of those issues, when after the landslide election win last year, many believed she would push for constitutional reforms that would reduce the military’s sway in the political arena. Instead, she was back in detention, with the military swooping back in.

Suu Kyi’s handling of the Rohingya Muslims is just one element that complicates her legacy. She also used colonial-era security laws to prosecute dissidents and critical journalists. And her supporters were also disappointed to find that power in her government was held mostly by men and from the Bamar ethnic majority, and with her never attempting to cultivate a successor.

If by locking her up and beating down political opposition the junta expected they could return to the old ways, it seems to have got it badly wrong. The new democratic movement emerging in Myanmar is younger, more confrontational, and also one that isn’t shaped around Suu Kyi. A shadow government has also emerged in exile, calling itself the National Unity Government, that with help from protestors is operating underground clinics, hospitals and schools, and which, unlike Suu Kyi’s government before she was deposed, has consciously chosen to be more progressive, appointing members of ethnic minorities to high positions, and even reaching out to Rohingya Muslims. Many protestors are also taking up arms, and with hundreds of rebel groups emerging, ranging from small cells in cities to large militias in the countryside, the country appears to be hurtling towards a full-blown civil war.

In this changed political landscape, Suu Kyi is back in detention with reduced moral and political clout. “I think a lot of the dynamics and a lot of the story has moved beyond Aung San Suu Kyi. It’s not because she’s no longer loved and respected. It’s just that she’s been silenced, and a lot of things have happened without her and have taken on a life of their own,” Richard Horsey, a senior adviser on Myanmar for the International Crisis Group told the New York Times.

Resistance in Myanmar is very much around. But it is outgrowing its icon.