An Indian August at the UNSC

August was India’s moment in the journey of the UN 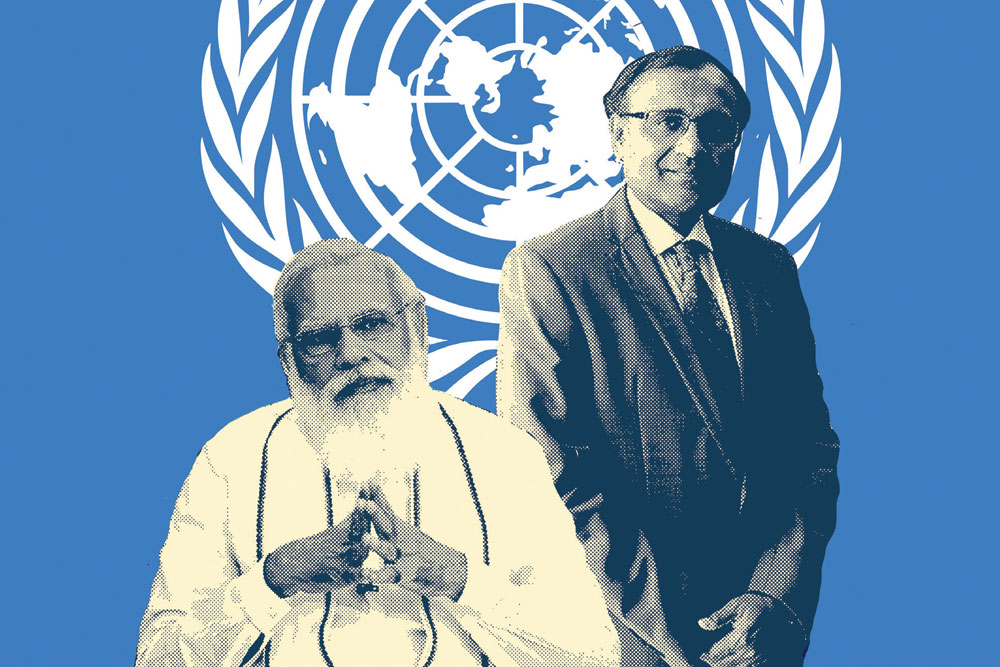 
OUR MAN AT the UN, Ambassador TS Tirumurti, was not very convinced when I told him as part of my official briefing as the head of the UN Division in the Ministry of External Affairs, that he would enjoy his forthcoming multilateral post in Geneva. He was then the desk officer for Bhutan, dealing with weighty matters of our neighbourhood and thought that his work in Geneva would not be half as important. But he took to multilateral diplomacy like fish to water and swam all the way to its pinnacle. More than that, he arrived in New York to take our seat at the horseshoe table and sat at its head for a month with dignity and aplomb. With him sharing the honour were the prime minister, the external affairs minister and the foreign secretary in a rare constellation.

Having been on the Security Council in 1992, including the month in which Ambassador Chinmaya Gharekhan was president, I know that the presidency of the Security Council has its perils. It is stressful, thankless and, at times, embarrassing. The rotational presidency is a feeble attempt at equalising permanent and non-permanent members in a highly discriminatory structure. The permanent members jealously guard their privileged position and drive the Security Council. The non-permanent member, who becomes the president, according to one of my colleagues who preceded me in the Council, is like a child who is permitted to hold the steering wheel for a while, as his father keeps control over the brake and the gears and also watches the road. The thrill of the child is immeasurable as he thinks that he is actually driving the car.

Afghanistan, in fact, was not expected to explode during the Indian presidency as it was anticipated that the Afghan forces would resist the Taliban for some time. When the agenda of August was announced by the president, he mentioned only Syria (chemical weapons), Syria (political and humanitarian), UNIFIL (UN Interim Force in Lebanon), Somalia, Yemen, Iraq and the Middle East (Israel-Palestine) monthly meeting, all perennials with little chance of change in a hurry. Besides, there were the three major items India was bringing to the Council on its own initiative. As it happened, India had to call a meeting of the Security Council on Afghanistan in between on the request of the Ghani government, to which India was known to be sympathetic.

It is unusual for Council presidents to take up issues on their initiative and they have to be presented as the collective wish of the Council. It must have taken a lot of effort and time on the part of our mission to persuade other members to accept the additional items, particularly in the month of August, which is a holiday season in New York. Normally, the chiefs of mission would be in their home countries for briefings on the forthcoming General Assembly session or holidaying in Europe, leaving their deputies to mind the store. When invitations went to other heads of government to participate in the session chaired by our prime minister, anxiety must have increased and ambassadors may have been asked to change their travel plans.


The non-permanent member, who becomes the president, according to one of my colleagues who preceded me in the UNSC, is like a child who is permitted to hold the steering wheel for a while, as his father keeps control over the brake and the gears and also watches the road

As the preparations were made quite in advance, Ambassador Tirumurti was able to announce at his first press conference as Council president that three important topics—maritime security, peacekeeping and counterterrorism—would be taken up during the month. He explained the rationale of bringing these ideas to the Security Council under various agenda items and also informed the press that Prime Minister Narendra Modi would chair the session on maritime security, and that some other heads of Government might also attend in a virtual format.

It was, perhaps, as a compensation for the diplomats involved that the ambassador and his wife, Gouri, prepared millet breakfast, including savoury murukku for them. Modi, a champion of millets as healthy food, tweeted: “Distinguished delegates were also served delicious millet murukku. This is one snack I also relish and urge all of you to try it as well.”

In 1992, the Security Council was so preoccupied with the aftermath of the Gulf War that no other item could be taken up. There were tough negotiations in the Council, particularly in the Council consultations room, open only to two members from each of the member states to spend hours, with no holds barred discussions trying to find consensus. The only compensation we offered to the delegates was Darjeeling tea. Ambassador Gharekhan also placed a photograph of Mahatma Gandhi in the president’s chamber for a month.

An added peril that faces the mission is the high expectation raised in India about the Council presidency and its ability to reform the UN and make it effective in dealing with global issues. The fact that the position and its timing are determined by the alphabetical order is soon forgotten, as it coincided with our 75th Independence Day month. Many in India even expected that the world would be so impressed with our performance that India would be given a permanent seat in the Security Council straightaway.

The UN lives from moment to moment given its wide agenda and the fact that it means different things to different members, though assembled under a common roof. After every meeting, one set of delegates gives way to another and new concerns and issues take centrestage. Once a resolution is passed or the agenda item is deferred for further discussion, the players disappear and the documents are stored in the archives unless there are action-oriented resolutions, which are very rare. For this reason, the results of the debates are often nebulous and they are forgotten till the topic is raised again in an annual session, or some situation erupts in conflict.

When 9/11 shocked the world, many resolutions and proposals on terrorism suddenly came alive and it appeared as though drastic measures will be taken to eliminate terrorism. But soon the old concerns about the true definition of terrorism and the difference between terrorism and freedom struggle surfaced and the matter was shelved again.

The issues raised by India in August were debated before and our initiative served only to remind the world that no solutions had been found. Principles and concerns were expressed at the highest possible level, but the issues did not move much closer to a consensus.

August was India’s moment in the journey of the UN to rid the world of the scourges of war, terrorism and insecurity of the oceans and it was for those who were part of the labours of August 2021 to cherish the moment and feel proud. Nothing more, nothing less.