The householder has stepped out, once again 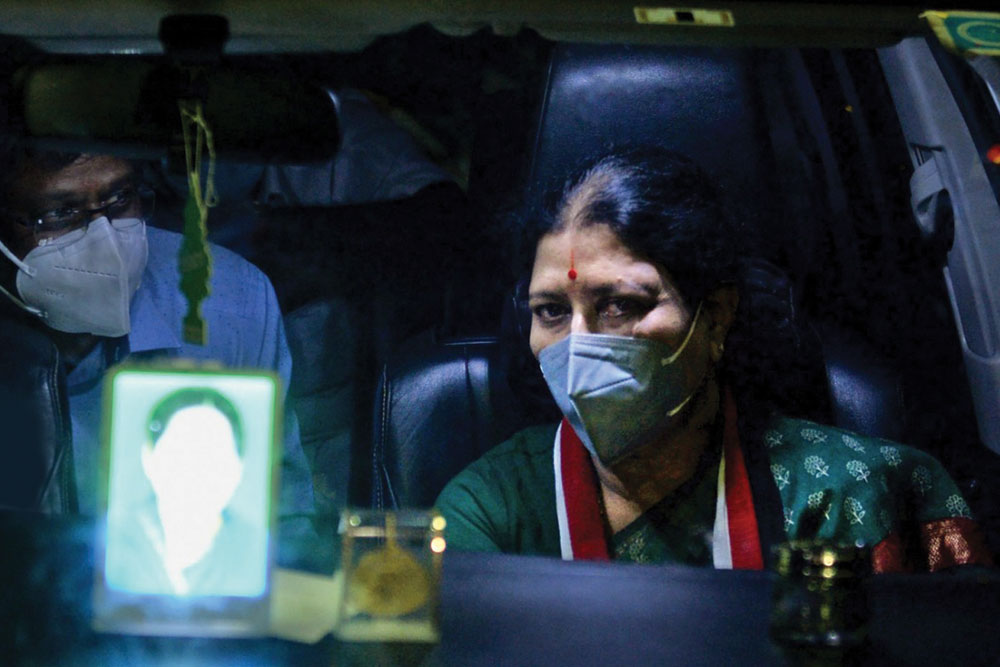 
“ANBUKKU NAAN ADIMAI… (I am a slave to your affection.)” Upon her dramatic return to Chennai on February 9th after a four-year incarceration on corruption charges, VK Sasikala, whose convoy took 23 hours to cover the 350-km distance from Bengaluru, channelled a film song from 1977 that MG Ramachandran had often used in campaigns. This was her first public address—to hordes of supporters gathered en route—since her exile, and she added in a steely voice: “But I will not yield to any repressive action.” Sasikala was no slouch, even if bereft of power, position and active engagement with politics. Dressed in green, the former interim general secretary of the All India Anna Dravida Munnetra Kazhagam (AIADMK) and long-time aide of former Chief Minister J Jayalalithaa dipped her hand in the headwaters of the party’s history, not only invoking an MGR song but also stopping by his memorial in Chennai early on February 9th to garland his golden statue, even as Jayalalithaa’s memorial remained closed, perhaps to prevent ‘Chinnamma’ from scoring another symbolic photo-op. Accompanied by her nephew and political brother-in-arms, the Amma Makkal Munnetra Kazhagam (AMMK) General Secretary TTV Dhinakaran, as she made her way to her niece J Krishna Priya’s house in T Nagar—a centrally located neighbourhood in Chennai where her family owns a number of properties, some of them serving as addresses for shell companies—Sasikala was a picture of contradictions. There was sympathy, no doubt, for a woman who had stood by Jayalalithaa in her darkest hour, and it was tinged with concern for her health, for she had only just recovered from respiratory distress due to Covid. Dropout politician and film star Rajinikanth was among those who had called Dhinakaran to wish her good health.

Simultaneously, there was intrigue and speculation about what her return entailed for the ruling AIADMK, which will face the Assembly polls under dual leadership for the first time in its history. The party had displayed tell-tale signs of unease ahead of her journey back home. Senior ministers of AIADMK told the director general of police that Sasikala and Dhinakaran were trying to incite violence. The party issued a warning against the use of AIADMK party flags by Sasikala and her loyalists, and expelled local functionaries in Trichy and Tirunelveli who had put up posters in her support for ‘anti-party activities’. Additionally, the government, in a sudden announcement, said it would confiscate six properties owned by VN Sudhakaran and J Ilavarasi, relatives of Sasikala, in Chennai. “We needed to send a strong message to our cadres and to the people that there is no space for Sasikala and Dhinakaran in AIADMK,” says D Jayakumar, state minister for fisheries. A day ago, he had dubbed them “DMK’s B-team”. Speaking to Open, he denied that they posed any threat to the party—and indeed, there is little reason to think otherwise. In the bypolls to 22 Assembly constituencies held in 2019, AMMK failed to break the vote bank of AIADMK, which won nine seats to reach a majority of 123 seats in the 234-member Assembly. It did, however, play spoiler in a handful of constituencies, including two former AIADMK bastions in Theni district—Andipatti, which famously returned MGR to the chief minister’s seat while he was in his hospital bed in 1984, and Periakulam, the hometown of Deputy Chief Minister and AIADMK Coordinator O Panneerselvam. Although Dhinakaran appears to be extending an olive branch now by suggesting that the Dravida Munnetra Kazhagam (DMK) is the common enemy for all followers of Jayalalithaa, and that he has never considered the chief minister and the deputy chief minister as enemies, the AIADMK is unlikely to accept Sasikala’s induction into the party. “There is neither arithmetic nor chemistry that can make AMMK and AIADMK come together,” says political analyst Raveendran Doraiswamy. “AIADMK no longer needs Sasikala or AMMK, which only enjoys around 5 per cent vote share. And Sasikala cannot work under OPS or EPS. She desires absolute control of the party, even if she herself cannot contest the elections till 2027.” Fielding questions from reporters during the roadshow to bring Sasikala home, Dhinakaran said he will once again contest the RK Nagar Assembly seat, which he won in a bypoll in December 2017, besides another constituency from Theni district.


Dressed in green, Sasikala dipped her hand in the headwaters of the party’s history, not only invoking an MGR song but also stopping by his memorial in Chennai early on February 9th to garland his golden statue, even as Jayalalithaa’s memorial remained closed, perhaps to prevent ‘Chinnamma’ from scoring another symbolic photo-op

With the death of Jayalalithaa, the electoral unity of the three communities that make up the Mukkalathor, a powerful vote bank that shares a common origin story, is no longer certain. The Maravars, whom Panneerselvam and his son, P Raveendranath Kumar, Member of Parliament from Theni, represent, may not vote with the Kallars, the most populous of the three, over whom Sasikala and Dhinakaran hold sway. A section of the AIADMK leadership, in fact, steers clear of criticising Sasikala for fear of offending their vote bank in the Thanjavur belt. AIADMK Deputy Coordinator KP Munusamy has gone so far as to say that the party would consider taking back Dhinakaran if he tendered an unconditional apology. “The fact that VP Jayapradeep, son of O Panneerselvam, wished Sasikala a full recovery, means something,” says Thanga Tamilselvan, a former Andipatti MLA and Dhinakaran loyalist who quit AMMK, where he was propaganda secretary, to join DMK in 2019. “AMMK was formed with the intention of redeeming AIADMK from the hands of the two leaders who hold its reins. But it had little impact on the ground. Even in Theni, where AMMK claims to have a following, there are few ground-level workers. I joined DMK because of two reasons: one, it’s a casteless party; and two, I believe MK Stalin is the only one who can bring the people together the way Jayalalithaa did,” Tamilselvan says. “In our campaign, we have been talking about Sasikala’s misdeeds as well as about the corruption in the government. We are not afraid to take on anyone.”

In a minor gaffe, Panneerselvam’s tweet on freedom from bonded labour day coincided with Sasikala’s return to Chennai. Then there are the photographs of Edappadi K Palaniswami and Panneerselvam bowing before Sasikala that have resurfaced on billboards and social media, and DMK leader Udhayanidhi Stalin’s outrageous comments on their obsequiousness are still fresh in public memory. To avoid becoming targets of opprobrium, both leaders must script captivating narratives of their own. And they are trying to do just that. In a move set to benefit over 16.43 lakh farmers in Tamil Nadu, the state government recently announced that it would waive crop loans outstanding in cooperative banks to the tune of Rs 12,110 crore. While Palaniswami’s campaign rides on such doles and claims of good governance, Panneerselvam’s strength remains his unwavering loyalty to Jayalalithaa and the consequent legitimacy of his claim to her legacy. The Bharata story, the survival of the Amma myth and the intransmissibility of it, are what he has going for him. Shaking hands with Sasikala, or indeed, bowing before her, is no longer an option. In the popular imagination, it is Sasikala who dragooned Jayalalithaa into electoral defeat in 1996, and into an early grave in 2016. Jayalalithaa herself would have not seconded these allegations. In an interview to The Hindu in 1996, quoted by Vaasanthi in The Lone Empress, her biography of Jayalalithaa, the former chief minister vehemently denies bestowing extra constitutional powers on Sasikala. “Calling her a de facto chief minister is just nonsense. She is simply not interested in politics and I had no intention of bringing her into politics. People must understand that a politician needs someone to look after his or her home… It is only because Sasikala stepped in to take care of my household that I was able to devote my entire and full attention to politics,” she tells the newspaper correspondent. A quarter century later, the householder has stepped out, once again, and how.