A Trade Wind from Australia 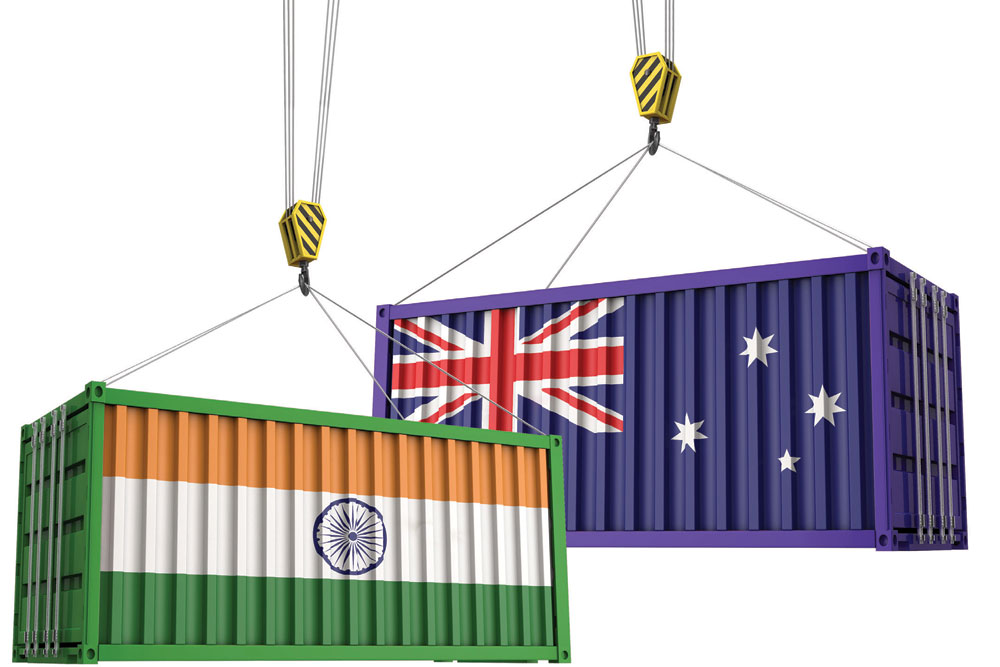 
ON NOVEMBER 22, the Australian parliament rati­fied the Australia-India Economic Cooperation and Trade Agreement (AI-ECTA), another trade agree­ment that was negotiated swiftly and signed into a deal. India negotiated a Comprehensive Economic Partnership Agreement (CEPA) with the UAE in a record 88 days earlier this year. With this, India has concluded a third trade agreement since 2021. In an era of trade pessimism, the “mini FTA” with Australia stands out as an example of what can be done when countries have the required will to push trade.

Under the deal, India will eliminate tariffs on 85 per cent of Australian goods exported to India. This figure will go up to 91 per cent over 10 years. At the same time, 96 per cent of Indian goods exported to Australia will get duty-free access to that country’s markets from the start. In 2020, India was Australia’s seventh-largest trading partner with two-way trade at $24.3 billion. This figure is expected to rise to $50 billion in the next five years.

The agreement with Australia is the first free trade agreement (FTA) that India has signed with a developed nation in more than a decade. It is expected to serve as a foundation for a more compre­hensive FTA—the Comprehensive Economic Cooperation Agree­ment (CECA)—that will be negotiated soon. Under the AI-ECTA, India’s dairy sector has been kept out of the purview of imports from Australia as have wheat, rice, chickpeas, bajra, apples and sugar. There are a handful of other items as well. These are all politically sensitive trade items that impact a large number of farmers in India. India has also managed to liberalise visa arrange­ments for Indian students. Commerce and Industry Minister Piyush Goyal noted that the “agreement would also open new opportunities for the service sector in India and would immensely benefit students by offering them an opportunity to work in Australia.”

Australia, in turn, will gain access to the Indian market for its wines and other agricultural products. Tariffs up to 30 per cent on avocados, onions, broad, kidney and adzuki beans, cher­ries, shelled pistachios, macadamias, cashews in-shell, blue­berries, raspberries, blackberries, currants will be eliminated over seven years.

The deal comes at a time when the world is in the grip of trade pessimism. The trend is not new. In dollar terms, trade has continued to increase and after the pandemic years, has returned to a new high. UNCTAD in its Global Trade Update in February this year said the value of global trade reached a record level of $28.5 trillion in 2021, an increase of 25 per cent on 2020 and 13 per cent higher compared to 2019, before the Covid-19 pandemic struck. As a percentage of global GDP, how­ever, trade peaked in 2008 when it stood at 61 per cent. It has not crossed that mark. In 2020—the year Covid struck—that figure was 52 per cent, roughly the same level where it was in 2003.

The year 2008 stands out in the story of global trade. That was the last year when a round of trade liberalisation talks was held, in Geneva. That was also the year when the global finan­cial crisis hit Western countries, and developing countries thereafter. The economic crisis in the West ensured that free trade became a political liability for those countries.

But the real issue that stalled progress in trade talks was the “comprehensive” approach of Western nations, which de­manded that all contentious issues be settled in a grand bargain. Developing countries led by India, Brazil, China and South Africa were in no position to barter away key livelihood issues. This was the approach that politically doomed trade openness in the US. The inability of that country to compen­sate the losers from ambitious trade deals like NAFTA ultimately made it very hard to sell free trade to large sec­tions of the American electorate.


Under the FTA, India will eliminate tariffs on 85 per cent of Australian goods exported to India. This figure will go up to 91 per cent over 10 years. At the same time, 96 per cent of Indian goods exported to Australia will get duty-free access to its markets from the start. In 2020, India was Australia’s seventh-largest trading partner with two-way trade at $24.3 billion. That is expected to rise to $50 billion in the next five years

The pound of flesh demanded from India was lower tariffs on agricultural imports as well as its ability to levy special tariffs in case of an extraordinary surge in imports. For a country like India to give up the Special Safeguard Mechanism—an instrument that allows imposition of special tariffs on agricultural imports—would sound the death knell for millions of small and marginal farmers. This was one of the key reasons for the breakdown of the Geneva talks. The then trade minister of India famously said that “I am not risking the livelihood of millions of farmers.”

It took India a while to give up the “comprehensive” at­titude. What befell the FTA with Australia is an example. Nego­tiations for the FTA were started in 2011. But after nine rounds, negotiations were suspended in 2015 as the process was going nowhere. India was adamant to protect its dairy sector as well as liberalised access for professionals.

Six years later, in September 2021, the threads were picked up again for an FTA (a Comprehensive Economic Cooperation Agreement or CECA). But instead of chasing a politically difficult, “all in” deal, the two countries decided to leave out sensitive, deal-breaking, issues. Goyal hinted at a “mini FTA” in February this year after meeting his Australian counterpart Dan Tehan. And that is exactly what was delivered in April when the AI-ECTA was signed.

Economists worldwide tend to view regional and bilateral FTAs negatively. In theory, a comprehensive—worldwide— free trade regime is preferable to a “salad bowl” of individual FTAs between different regions and countries. A comprehen­sive agreement irons out frictions and the economic gains from trade are far greater than individual deals. But very often economists ignore the practical issue of reaching/concluding such deals that are filled with political pitfalls. For one, the power asymmetry between the bloc of rich countries and de­veloping countries is too large for a comprehensive agreement to be reached without rancour. The initial trade liberalisation rounds after 1991 were achieved in an ideologically charged atmosphere where state-led development was discredited ideologically. For another, there are simply too many countries in the world to allow for a reasonable deal to emerge.

In recent years, another, far more difficult, problem has emerged. Trade is now a geopolitical issue as well. Countries like China, that have massive trade surpluses, have used their economic heft for political purposes. The Belt and Road Initiative (BRI) that was initially held as an “alternative” to the Western “imposed” free trade system, turned out to be another neo-colo­nial instrument of domination. From Africa to Pakistan and from Sri Lanka to Solomon Islands, trade and investment are now far more contentious than they were even at the height of “forced openness” back in the 1990s. The danger now is outright political domination from a country with imperialist ambitions.

This has led to an adverse effect on trade as well. India and other countries are unlikely to sign trade deals solely on the basis of economic gains. The fear that there may be hidden political costs that follow such deals has made countries cautious. FTAs are more likely between friendly countries than those who offer opaque deals. Even multilateral trade deals (such as the RCEP) are now treated with caution. India opted out of RCEP despite domes­tic criticism from those in favour of the deal for these very reasons.

But this need not be a cause for pessimism and India’s FTAs with UAE and Australia show there is a third option between a comprehensive, global, free trade arrangement and increasing autarky. India has not let trade pessimism and its unhappy experience with trade liberalisation talks come in the way of bilateral trade deals. What matters are political will and the exploration of opportunities that have to be seized as soon as they emerge.