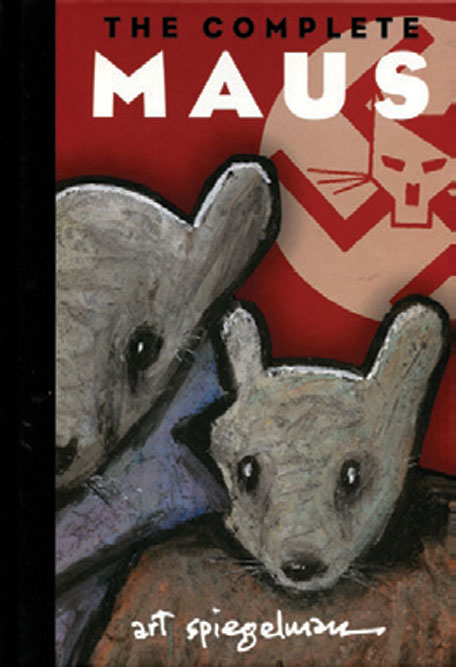 ON MARCH 1, the defiant president of a besieged country tweeted: “To the world: what is the point of saying <<never again>> for 80 years, if the world stays silent when a bomb drops on the same site of Babyn Yar? At least 5 killed. History repeating…” A little more than a month before that, the board of education of McMinn County in Tennessee had voted to ban Art Spiegelman’s Maus from school curricula. Spiegelman’s semi-autobiographical graphic novel of the Holocaust, first serialised as a comic in his Raw in 1980, was published in two instalments in 1986 and 1991. In 1992, Maus received a special Pulitzer, the first for a graphic novel.

The full title of the work is Maus: A Survivor’s Tale. Spiegelman’s parents, called Vladek and Anja in the book, were Polish Jews and survivors of Auschwitz-Birkenau. His mother committed suicide in 1968. The novel is also a father-son story, illustrating Art’s difficult relationship with his father, while the Holocaust becomes the son’s unlived formative experience and inheritance. Jews are the mice, Germans the cats. And Poles are the pigs. The survivors’ tale is a shared and individual trauma whose consequences are both world-defining and customised for the son. Maus was an overwhelming artistic and critical success, a masterpiece demonstrating how the most horrific story of the 20th century could be told using an unusual form for the content. It had been course material, an ‘anchor text’, on the Holocaust for eighth graders at the time it was banned by the McMinn County education board.

The board, three decades after the full work was published, pounced on “cuss words” (for example, ‘bitch’ and ‘god damn’) and “nudity” (animal nudity to be precise) to question what Maus and Spiegelman were teaching students. As one board member put it: “We don’t need to enable or somewhat promote this stuff. It shows people hanging. It shows them killing kids. Why does the educational system promote this kind of stuff? It is not wise or healthy.” Educators did their best at the meeting, as David Corn reported in Mother Jones, to educate the board members—about the historicity of the Holocaust, that it was a nasty affair, that children were murdered, that about six million were killed…But the board got its way, and the headlines. Of course, as another board member said, “I have not seen the book and read the whole book. I read the reviews.”

Spiegelman told the New York Times that the board was basically asking, “Why can’t they teach a nicer Holocaust?”


The debate over history and its depictions in historiography, literature, art and architecture that has divided the US since long before the statues were brought down and institutions began removing Washington, Jefferson and even Woodrow Wilson from their names and ‘cancel culture’ became the norm on the university campus—largely as a push from the liberals and the left—has seen a conservative reaction that, at its best, wants history to be distinguished between ideals and deviations from the same, and, at its worst, cannot countenance revision. It meets the woke attempt at rewriting history from today’s perspective in that both extremes refuse to face the reality of the past. In the case of the Tennessee county education board, to protect children from the world, they would rather not tell 13-year-old kids what the world is really like.

Spiegelman himself said a few years ago: “The Holocaust trumps art every time.” He was born Itzhak Avraham ben Zeev in Stockholm in 1948. Spiegelman, the family name, literally translates as “mirror man”. As far as holding up a mirror to society goes, Arthur, or Art as he became, comes from the opposite end of the spectrum on free speech—he had defended the right of Nazis to march in Skokie in Illinois, then known for its sizeable population of Holocaust survivors. “I just thought that seemed right. Let them march, and if there’s any more trouble, stop them. I thought that was a conversation that had to take place…It shaped me,” Spiegelman said recently. The censorship of the McCarthy era, especially the burning of comic books under the Comics Code, was an eye-opener for him and other graphic artists/ cartoonists of his generation.

For now, the Tennessee ban has pushed sales of Maus to record levels (book bans are meaningless anyway in the land of the First Amendment), so much so that the publisher has asked the Internet Archives to remove the free copy from its digital library. Now that’s an axiom of publishing education board members never learn (just as they don’t read). Spiegelman might turn out prophetic for telling the Guardian: “I see a future where it [the book galley] says, ‘Published April 3, banned May 12,’…That would be the end date of anything they need to do to publicize the book.”