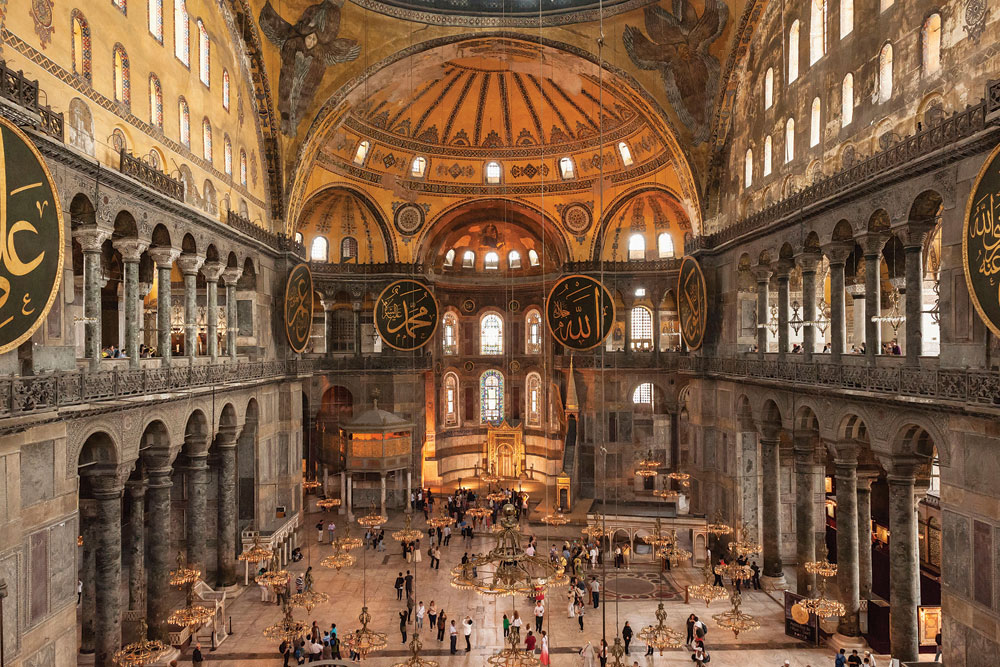 The interior of the Hagia Sophia in Istanbul (Photo: Alamy)


POLITICAL MOVES AND judicial intervention go hand in hand in Turkey. This isn’t unique to President Recep Tayyip Erdog˘an’s country alone. But the agility of authorities that overturned within a matter of days that rich secular legacy of the founder of modern Turkey, Kemal Atatürk, was remarkable—and sad. These deft moves attracted global attention also because a sixth century iconic monument has been a bone of contention between secularists and Islamists and was a seat of rivalry between Ottoman and orthodox worlds. The current structure was built as a church under the orders of the eastern Roman emperor Justinian I (although the original Hagia Sophia was built a century earlier), converted to a mosque after the fall of Constantinople to the Ottoman Empire in 1453 by Mehmed the Conqueror, and then designated a museum by Atatürk in 1934. In its 1,700 years of existence, the stunning structure has been a place of Christian worship for 1,100 years, then 500 years under Ottoman rule, and more than 90 years as a museum.

Very recently, a court in this land known for its sham trials, ruled that the turning of the Byzantine monument into a museum in 1934 was unlawful. Shortly thereafter, Erdog˘an, on July 10th, issued a decree ordering that the majestic Hagia Sophia, the 65,000-square-foot stone structure that has been a tourist hotspot for decades, be opened for Muslim prayers. As a result, the first prayer at the Hagia Sophia mosque will take place on July 24th.

What is farcical is that Christian mosaics in this huge monument will be covered with curtains or lasers during the Muslim prayers, according to an announcement by the ruling Justice and Development Party (AK Party) of Erdog˘an. As someone who has visited the place twice, it was its cosmopolitanism that had left me impressed. The last visit of 2016, days before the suicide bomb attack on Atatürk Airport, was momentous also because many residents of Istanbul, most of them Muslims, told me they were proud that the grand Byzantine structure was a museum, and not a mosque. Guides felt a sense of gratification that this is a structure that had been a church and a mosque and then a museum, and I recall them emphasising that it should remain a museum since it attracted millions of tourists annually to Istanbul, where Erdog˘an, the country’s authoritarian leader, has met with electoral setbacks.

Most people in Istanbul were friendly and the guides friendlier, all schooled in the not-so-distant secular past of the country. Yet, there were also those in long robes and turbans who felt betrayed about being humiliated by the adoption of what they argued were Western morals “foreign” to Turkey. They wanted the Hagia Sophia to be turned into a mosque in line with the customs that existed in 1453—it is said that around then, it was customary to convert at least the main cathedral of a place of worship of the conquered people into the place of worship of the victors.

For centuries thereafter, the images of mosaic on the ceiling of the cathedral, comprising images of Jesus Christ, Virgin Mary, John the Baptist and other Christian symbols, were plastered and hidden from public view until Atatürk announced that it would be a museum in the new republic.

Now, the plan is to reveal the famed mosaics to all visitors when the Muslim prayers are not on. Unlike in the past, the admission would be free of charge. The likes of Erdog˘an see this as a milestone in snatching back the lost soul of Islamic Turkey that various Islamists and hardline poets had appealed for since the 1950s to no avail. Regardless, their pronouncements found echo in the voices of those committed to Islamic revival and proud of the Ottoman heritage. The Byzantine empire fell to the Ottomans following a long siege of the capital city of Constantinople in the 15th century.

In fact, the population of Turkey’s minorities that includes Armenians and others has shrunk thanks to genocides at various points of time, especially in the decade before the establishment of the new republic in the beginning of the 20th century. But now it is slipping fast into an intolerant Islamic nation where dissent is viewed as a sin that cannot be condoned.


Erdoan’s critics say that he was in a hurry to convert the Hagia Sophia into a mosque because his party lost two successive polls in Istanbul. It was indeed a humbling experience for a man who had said not long ago that if his party loses Istanbul, it would also lose Turkey

Most of this is a big departure from Atatürk’s time. Erdog˘an has been making no-holds-barred assaults on secular institutions in his country and the intelligentsia with an eye on pandering to the radical Islamists in order to cling on to power. Although he has not attacked the founder personally, he has merrily quoted Mehmed the Conqueror’s will that says whoever tweaks the status of Hagia Sophia was committing the gravest of all sins.

The whole world has reacted to Erdog˘an’s move to promote radical Islamism and to turn a secular nation—at least, in principle—to an Islamic republic. While fanatical forces of religion have backed him, the likes of Edward Luttwak, the noted military historian and author of books on the grand strategies of Byzantine and Roman empires and essays on Turks, tweeted with a sense of resignation, ‘Hagia Sophia is not just a ‘religious structure’. It is sublime. The world is littered with inferior copies, including the Ottoman mosques. Istanbul’s Muslims are well educated. They despise Erdog˘an & his attack on the city’s character to please the unlettered fanatics.’ He added, ‘No civilized government changes the identity of any religious building. Erdog˘an has just handed over the Hagia Sophia, hitherto a museum open to all, to the notorious Diyanet [Turkey’s infamous Directorate of Religious affairs], staffed by ignorant fanatics & bleak time-servers.’

Any move to dig up history in the name of ‘avenging’ historical insult invariably opens up a can of worms in any modern country. Such designs to stir religious pride and drum up conservatism are counterproductive, especially because such notions of grandeur and conceit border on the pretentious and are not accurate portrayals of history. Throughout the world, we have seen the horror such inward-looking policies have unleashed over centuries, from Hitler’s Germany to countries where power-hungry rulers are leaving no stones unturned in tapping jingoism to secure votes. Most often, leaders bent upon fanning hatred and riding a wave of ultra-nationalism are bound to take their countries backwards by decades or centuries, depending on the intensity of their bigotry and prejudice.

Columnist Peter Welby, an expert on religion, history and religious extremism, makes a stunning observation about how the priorities of great men can change the course of history. He cites the story of how Caliph Umar refused to enter Jerusalem’s Church of the Holy Sepulchre in 638 CE, and instead, prayed at a place where a stone he threw fell. A mosque came up at the place where he prayed while the church where Christians believe Jesus died continues to stay. The logic of the Caliph was that if he had accepted the invitation of the Orthodox bishop at the time and prayed inside the church, his followers would have converted the church into a mosque. So the story goes about the seventh century siege of Jerusalem. Welby regrets that instead of Caliph Umar, Erdog˘an chose to follow in Sultan Mehmed’s footsteps. His critics say that he was in a hurry to convert the Hagia Sophia into a mosque because his party lost two successive polls in Istanbul. It was indeed a humbling experience for a man who had said not long ago that if his party loses Istanbul, it would also lose Turkey.

With this blunder, Erdog˘an has undermined the very republic where he was born in to a poor family and then gradually climbed the social ladder to become its president.