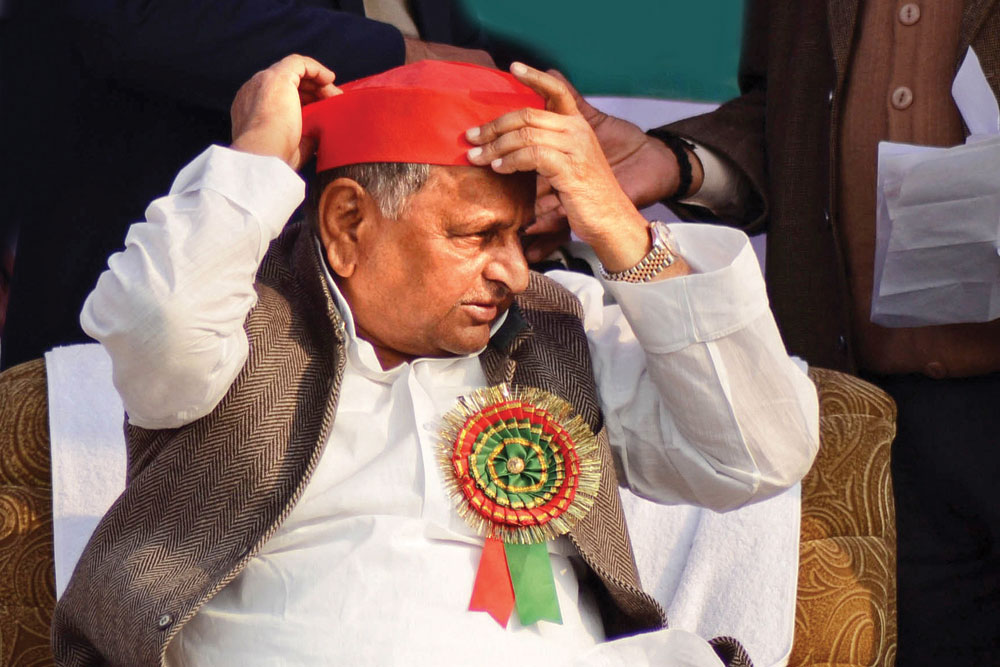 
THE DEATH OF Mulayam Singh Yadav brings to an end an eventful era in Uttar Pradesh (UP) as well as in national politics. He reigned supreme, despite the reverses that the heartland’s tumultuous politics invariably brings, for over 50 years. Elected as a legislator 10 times, as a Lok Sabha MP seven terms, thrice UP’s chief minister and the country’s defence minister in the United Front government, he came tantalis­ingly close to the prime minister’s chair when coalition politics was the order of the day.

Mulayam Singh was a teacher by profession, a farmer by lineage, and a wrestler by training. He hailed from a non-political background, emerg­ing from a modest village in Saifai of Etawah district that lies very near the Chambal ravines. More than a son of the soil, he was a child of the wilderness, who followed the path of his mentor, Chaudhary Charan Singh, and decimated Congress which represented the hold of the up­per castes in UP politics. His tenacity and touch with the grassroots ensured his survival in the cauldron of Mandal and Kamandal (caste and religious) politics.

I had the good fortune of knowing him from close quarters as we were members of the 16th and the present Lok Sabha and sat close to each other. His affectionate behaviour always attracted everyone to him during leisure hours when business in the House was not being transacted. I always wanted to learn the nuances of politics, articula­tion in the House, and how to be critical of the government and yet friendly with the treasury-bench members.

As a journalist and editor of The Prajatantra, I had read a lot about him in the 1980s and 1990s but when I sat with him to discuss certain matters, I found in him an elder brother who not only guided me in my speeches but also appreciated my points. He would very often say “apne speech mein itne statistics mat do. Log usme interested nahin hein (Don’t load your speeches with statistics)”.

Many a time he would cajole me to speak in Hindi and when I said I could not express myself as well, he would retort that if I could talk with him in Hindi, I could give a speech in it too. He often reminded me: How many people in your constituency, in your state or even the country, understand English? “Speak in Hindi, you will be appreciated. You will reach more people. If you want to be in national politics, Hindi is a must,” he said. At first, I was under the impression that Mulayam Singh was driven by his strong Lohiya-socialist background. But later I became convinced that Hindi has greater impact inside and outside the House. I told him once that I was forced to struggle to find the right word to say in Hindi and he said, “Use an Odia word… you can communicate. Never use English.”


A number of times he rushed to the House when I deliber­ated on certain Bills during the post-lunch hours. His nephew Dharmendra would jest that my presence in the House was dis­turbing Netaji’s siesta. He would narrate his initial years in the legislature and also in Lok Sabha when ministers gave to-the-point answers during Question Hour. When he saw a minister give a long speech in answering a question, he grew irritated and drew the attention of the speaker to curtail the rendering. A number of times he would enquire if I was participating in a discussion on that day. Such was his attention towards me.

A controversy arose around Baba Ramdev and his ayurvedic medicine and yoga. Ramdev’s large following is a well-known fact. But communist members and some self-styled ‘secularists’ started a vilification campaign against him. This was reflected in the House too. I saw Sharad Yadav also ventilating the same. But Mulayam Singh called him to his seat and said, Baba Ramdev is doing great service to the nation. “Woh to desh hit ke kaam karte hain. Unki alochana kyon?Communists jaisa baat mat karo (He works for the national good. Why criticise him? Don’t talk like the com­munists.)” Sharad Yadav fell silent and did not utter a single word against Baba Ramdev. Such was his influence.

Mulayam Singh Yadav followed the path of his mentor, Chaudhary Charan Singh, and decimated Congress. His tenacity ensured his survival in the cauldron of Mandal and Kamandal politics

Once he called me and asked about our state government’s functioning and said: “Suggest to Naveenji, free medicines be provided to poor patients in all government hospitals. I have done this in UP. Poor people will bless him.” This I truthfully communicated and it was later implemented in Odisha. When Akhilesh Yadav was chief minister, his father asked him to visit Bhubaneswar and meet Naveen Patnaik. He had tremendous affection for the Odisha chief minister and has often spoken highly of Biju Patnaik.

In August 2018, when I was conferred the Outstanding Par­liamentarian Award, he was the happiest man. I could see the sense of satisfaction in his eyes that an elder has when a person from his family brings home laurels.

Mulayam Singh was a practical man. When his elder son’s marriage was being discussed he could understand the inner feelings of Akhilesh and blessed the union. I asked: Didn’t you have any question for your bahu? He had promptly replied: “Yes, I did and asked would you take care of our cowshed?” There was mirth and laughter all around. I could connect this with my village elders. This earthiness of Mulayam Singh brought him closer to all people alike. I have seen MPs from BJP and BSP flock to him in Parliament for advice or for support and he used to help them without prejudice. Once, when I asked him about UP politics, his MY formula, he smilingly looked at me and said: Hamare party mein jitne MPs reserve seats se hain, utne BSP se nahin. (We have more MPs on reserved seats than BSP)” That was a fact. But he branded his politics differently.

I was inquisitive about the nuances of UP politics, its caste hierarchy, its upper castes who dominated for over six decades after Independence, which afforded little leeway for inter-caste mobility. How could he stay at the top of the game for over 50 years? Smilingly, he would say, “Kushti sikha hoon, jaanta hoon kaise chit bhi meri aur pat bhi meri ho sakti hai. (I learnt wrestling, I know the heads-I-win, tails-you-lose trick)” He demonstrated this with deft political moves that took opponents and allies by surprise. He was a near-perfect practitioner of realpolitik. In national politics, he was denied the prime minister’s post because of Congress’ opposition and he replied in the same coin by opposing Sonia Gandhi as head of government in 1999 after Atal Bihari Vajpayee lost the trust motion by a solitary vote. Yet, when the communists withdrew support to the United Progres­sive Alliance (UPA) government in 2008, he stunned pundits by stepping in to keep out his principal opponent BSP in UP. He was no respecter of orthodoxies.

It was Mulayam Singh who proposed the name of APJ Abdul Kalam for president in 2002 after Atal Bihari Vajpayee spoke with him. Credit also goes to him for the Sukhoi fighter deal that was sealed during his tenure as defence minister. Netaji, as he is lov­ingly called, was truly a leader of men who carved out a place for himself not only in UP but also in the national arena.