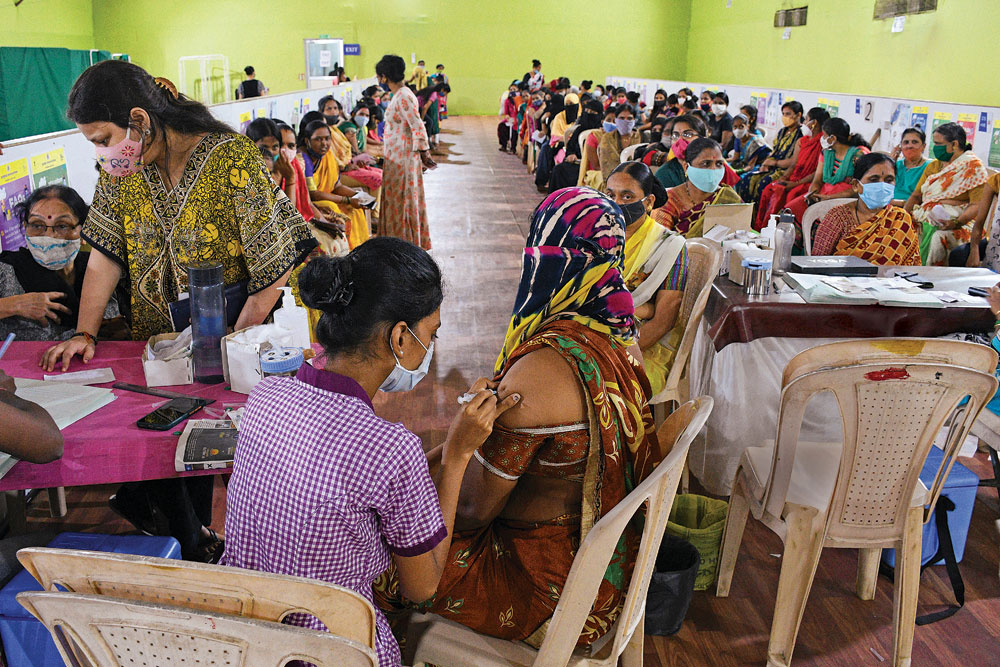 
A BILLION DOSES OF Covid-19 vaccines is a moment of pride for India. A year ago, no one thought that by the end of 2021 India would be anywhere near administering a majority of its eligible population with vaccine shots. Yet, India has managed to achieve that key marker in the fight against Covid two months before the end of the year. Of the billion-odd doses, nearly 290 million have been administered for the second time, another necessary mark if the country is to eliminate the scourge of Covid-19. With more than a quarter of the population being fully vaccinated, the danger of runaway infections has now been reduced greatly.

A combination of technological sophistication—running the vaccination through the CoWIN platform and providing vaccination certificates in real time—and political will has seen India through a very difficult time. It is a testament to the Union Government’s determination to see the vaccination drive through some very negative reactions from India’s multiple naysayers and systemic roadblocks.

The story of the last 10 months, from January 16th when the vaccination drive began till mid-October, is not a linear one. In this period a number of events took place that caused much misery, some of which was on purpose.

In January, just days before the vaccination drive was to start for frontline workers—doctors, healthcare and essential services personnel—a campaign designed to create confusion and mistrust began. Former health officials, ‘eminent virologists’, activists and others began openly questioning the vaccination policy. For starters, the rationale behind the emergency-use authorisation was called “hasty”. It was suggested that in the absence of data from a full, largescale, Phase III clinical trial, the efficacy of the vaccine and its safety were questionable. Matters did not stop there. There were reports in reputed journals like The Lancet about the violation of ethical standards in clinical trials across some locations in India that had begun late in 2020.


The consequences were obvious. Even the restricted vaccination drive prioritised for essential workers led to enormous vaccine hesitancy. Till March, there were multiple reports across different states as to how healthcare workers did not take the vaccine or were extremely hesitant to do so. The initial seeding of doubt through various media had done what it was intended to. The graph of vaccination between January and March—the time slot reserved for frontline workers—showed pitiful progress.

At this time another ‘debate’ was launched: that vaccine policy should be ‘decentralised’ and states should be allowed to purchase what they required and targets and processes should be solely in the hands of state governments. This led to a heated debate about ‘federalism’ and ‘over-centralisation’ and how that was driving vaccination to the ground. At that point, under stress, the Centre changed its vaccination policy and allowed states to pursue their own course. This led to failure. Many states launched global tenders for vaccine supply. Unsurprisingly, no one responded to these tenders. The reason was obvious: in March and April, vaccine supplies were low to the point of being unavailable. Western countries had begun hoarding vaccines and suppliers had their hands full.

It was also at this point that India was hit by the second wave of the pandemic. Between April and May, the country experienced a nightmarish situation in which four lakh people died. The death rate was exacerbated by shortages of oxygen and critical medical support, such as hospital beds equipped with ventilators and other life-saving equipment. It was at this time that reports about the number of ‘excess deaths’ that pegged the number as wildly as one to six million began to float. There was no scientific basis for these reports. Researchers began to use whatever data they could get hold of to arrive at the numbers they wanted.

The one area where the public sphere exacted its ‘price’ was in derailing India’s vaccine diplomacy. India’s vaccine exports were a fraction of what it was administering at home. This was a vital aspect of its arrival on the world stage as a provider of global public goods. But this programme had to be sacrificed at the altar of domestic politics

But these two events—the failure of ‘vaccine federalism’ and the second wave—had one effect: vaccine hesitancy disappeared almost overnight. The inflection point came in the week of May 15th to 21st. After that, the number of daily vaccinations witnessed a quantum jump that did not slow down until mid-September. Since then vaccination has slowed a bit. But this is not due to hesitancy or any supply issue but because a large fraction of the eligible population has been given at least one dose of the vaccine. Henceforth, it is the second dose that will gain importance. The remaining population—below 18 years of age—requires a different variant of the vaccine. One such vaccine has been given approval recently.

THERE ARE SEVERAL lessons from the vaccination episode. The first is that India is hostage to a multiple set of veto points even when the Government has overwhelming support in Parliament. When these veto points intervene, individually or collectively, there is little the Government can do. In the case of vaccines, there were many. Many state governments led by opposition parties behaved recklessly for the sake of political advantage. On the one hand, they did not want the vaccination drive to turn into a ‘Modi success story’ and hence the demand that vaccination be ‘decentralised’. Once this ‘debate’ began, multiple actors—civil society, press, activists—jumped in. This happened at a time when the vaccination drive was just about to take off to significant numbers. The obverse of this was to limit political damage once it became obvious that states could not secure vaccines on their own. Then the issue became one of blaming the Union Government. But this could not be done directly as the Centre’s changed policy was in response to what the states wanted.

It is at that point that the Supreme Court was approached through petitions for ‘policy clarity’. The court was scathing in its remarks and said the Centre’s approach was arbitrary and irrational. After this, it became common to hear that it was the court’s ‘rap’ that forced the Union Government to speed up procurement of vaccines, something that it had done only haltingly until that point. This was at the end of May.

The second lesson is that a noisy public sphere—often held as a good thing that leads to correction of policy mistakes—is at times hardly a good thing. In India, this led to the questioning of pricing decisions by the Government as well as the vaccine manufacturer, the Serum Institute of India (SII), at a very critical time. It was repeatedly questioned as to why the Centre was getting vaccines at the rate of ₹ 150 per dose. Some commentators even went so far as to demand the breakdown of costs and profits of
SII to ensure there were no ‘undue’ profits. The case ultimately went to the Supreme Court.

It was forgotten that an entrepreneur who has taken a huge risk in stockpiling doses has to be given a ‘risk premium’. It is not surprising that this obsession with ‘costs and profits’ of a private company is of leftist persuasion. Some even ventured so far as to say that the Government should take over the production facilities of SII. Fortunately, that disaster was prevented

In all this, it was forgotten that an entrepreneur who has taken a huge risk in stockpiling doses when no orders were forthcoming has to be given a ‘risk premium’. Otherwise, no entrepreneur would dare to take a risk the next time there was an emergency. It is not surprising that this obsession with ‘costs and profits’ of a private company is of leftist persuasion. Some even ventured so far as to say that the Government should take over the production facilities of SII. Fortunately, that disaster—a takeover in the midst of a pandemic—was prevented.

The one area where the public sphere exacted its ‘price’, so to speak, was in its derailing of India’s vaccine diplomacy. Begun no soon as vaccine supplies eased, India exported vaccines and in many cases gave them gratis to countries that had little heft in negotiating a fair price deal with global pharmaceutical companies. On March 1st, the prime minister of Antigua and Barbuda, Gaston Browne, thanked Prime Minister Narendra Modi for sharing vaccines with the Caribbean at a time when no one else was willing to do so. This did not go down well with a section of India’s civil society that thought this would go to the prime minister’s credit. Voices were raised as to why India was exporting vaccines when it needed them at home. It is another matter that India’s vaccine exports were a fraction of what it was administering at home. This was a vital aspect of India’s arrival on the world stage where it was now seen as a provider of global public goods. But this programme had to be sacrificed at the altar of toxic domestic politics.

It was also forgotten that a government in India, when faced with a once-in-a-century pandemic, would be extremely careful in each aspect of vaccination when hundreds of millions of doses had to be administered in a country where medical infrastructure ranged from the rudimentary to state-of-the-art. The Government cannot afford to be seen as favouring one class, a particular state or a region, or any other category. It is easy to criticise the Government for not undertaking “advance purchase agreements”, but the system of incentives in India is skewed badly because of multiple factors. In case anything goes wrong—such as a higher than accepted rate of adverse reactions from vaccination or questionable efficacy—the costs for civil servants and politicians will be huge. The system is geared to be risk-averse even when the situation—a pandemic—demands rapid action. It was a travesty that former officials and other individuals, who knew how the system worked, asked why the Government had not undertaken advance purchase agreements.

As the pandemic reaches manageable proportions—the number of daily cases now hovers in the range of 16,000 to 18,000—one can only conclude that it was a miracle that India managed to undertake vaccination on a billion-plus scale in less than a year. In normal circumstances, such an exercise requires many years.

It is customary now for India to be praised for its successful management of the Covid-19 pandemic. But one should not forget the toxic narratives built up during a critical period this year. At a time when India needed to be together, its activists, intellectuals and civil society were busy attempting to question, if not derail, the vaccination programme.