Majoritarian hubris and the writers’ protest 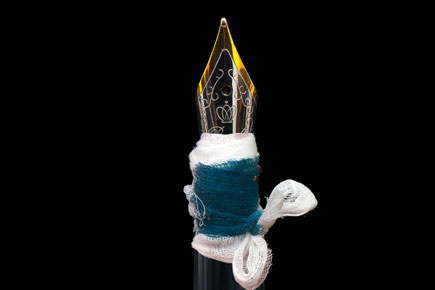 Writers don’t have bricks, regrettably. They don’t have acid in soda water bottles either, as in the good old days of 1947. The soda incidentally has been consumed for a decent peg of whisky, at least that is what pro-Government spokesmen seem to make out. Retired General VK Singh, now a Minister of State, is even reported to have called us authors ‘daru khors’. When I first got a whiff of this I sent an email asking my fellow protestors, ‘Does he mean me? I’ll sue the fellow.’ We all had a good laugh, and they all replied that he definitely meant me and I should go ahead and sue him. But I think the one defamation case he is facing is enough. Let’s see how he gets out of that one. I wish him luck. But I am left with a thought, why should the general put his foot into matters beyond his ken?

A democracy’s health is known by how it treats its minorities. Creative writers are a minority, rather a minority among minorities. This simple fact escaped the notice of the Government and its extended parivar.

I sometimes wonder how inept Governments can be. For instance, why did they allow this sedate protest by writers (who have nothing to throw at the establishment except their awards) to grow as it has done? Why did Government have to intervene so loudly ( you should hear their spokesmen) and so ham-handedly? A Hindi writer, Uday Prakash, and a political cultural icon Nayantara Sahgal return their awards given for outstanding writing by the Sahitya Akademi. A few others join in (mea culpa). Each one writes what he or she feels. The murder of Akhlaq for eating or storing in his fridge, meat wrongly rumoured to be beef, had just taken place in village Bisara, in Dadri. He was belaboured by a mob in the dead of the night, a planned premeditated murder if ever there was one. Some writers mentioned the Dadri incident, some settled scores against obstreperous Hindutva ideology pervading the times. I am reminded of Wallace Stevens:

The main thrust of the writers was anti-Akademi, for this institution had done nothing apart from a condolence meeting in Bengaluru. MM Kalburgi, a well-known Kannada writer, a free thinker was shot dead at his home in Dharwar on 30 August. In one of his plays his character says, ‘You can silence me but you cannot silence truth.’ Well, the superstitious lot silenced him. Someone rings his doorbell in the morning, he opens the door and is shot dead. The Sahitya Akademi, apart from a condolence meeting, doesn’t say a word against the attack. It could have held a meeting in Delhi, condemned the killers and the ideology that drove the killers, held meetings in Dharwar itself, allowed a chance to agitated writers to express their feelings. It did nothing of the sort. Even a condolence message to the family from Delhi was not sent, I am told. Writers started returning their awards.

How does the establishment react? The Finance Minister Arun Jaitley said that the return of the awards was “a manufactured revolt.” His statement just fell short of hinting that it was a conspiracy against the Prime Minister. There was a snide remark about those who received favours from the previous regime, taking it out on the current one. I don’t think any of the writers who protested were on social terms with the Gandhis. He also accused the writers of “ideological intolerance.” That takes the cake. Were these writers the ones who were intolerant or were those who threw petrol bombs on trucks and smeared the faces of legislators who ate beef?

All that was required to stop this tide of protests was for a minister, possibly the Culture Minister, or the Finance Minister himself to call some protesting writers and assure them that strict action would be taken against the perpetrators of this ghastly crime; condemn the killing in no uncertain terms; tell the police to treat the case with the greatest urgency; condole the death of the writer and send a message to the family. The ‘revolt’, as the Finance Minister dubbed it, would have subsided to quite an extent.

Instead the Government went into both a defensive and accusatory mode, each a flipside of the other. Why did you not return the award in 1984, or after the Bhagalpur riots? My reaction was that I was reacting to the murder of a fellow writer. “Oh, so you react only when an ‘intellectual’ is killed,” their spokesmen told me. You are a pseudo intellectual yourself they said, along with other such compliments. Will someone from the parivar kindly tell its extended family to please avoid the pseudo word—so popular with them since LK Advani coined the ‘pseudo- secular’ sobriquet. It jars.

Why now? They ask again and again. Why did you stay silent when Taslima Nasrin was manhandled in Hyderabad? That is a very loaded question. Taslima Nasrin’s room was vandalised by Muslim fanatics. The spokesmen seems to be asking why did your hackles not rise when Muslim fanatics were at it? The focus— whether it is beef eating or hounding out a Bangladeshi poet (because of CPM cowardice) has to be Muslim. Why can’t something else come into their focus? Incidentally, I wrote a poem on the handling of Taslima Nasrin.

Then the Government got hold of various spokespeople to confirm that this was definitely an attack on the Prime Minister. One Kanchan Gupta, for example, in Pioneer felicitously described protesting writers as ‘dog shit.’ The Chief Minister of Haryana gets into the act and says Muslims can stay in India provided they don’t eat beef. He says this as if he was allowing some migrant nomads to stay in his estate. One reason why Aryans are no longer migrants according to Hockey India president, Narinder Batra and Smriti Irani, the Education Minister, is that they don’t want to be equated with later migrants like the Khiljis and Tuglaqs. And no one ever drove the Dravidians south. They lived in the south, Aryans in the north—life and history couldn’t be better.

It is unnerving that the cow has once again become the centre of political discourse and strife in the country. If that is the case, can the pig be very far behind?

This is the BJP tactic, bully your way. They have done that at the Film and Television Institute at Pune. They appointed Gajendra Chauhan who had acted as Yudhishthir in a TV soap opera as the director of the institute. I wonder if he would have been appointed, had he acted as Dushasan in the soap. Striking students would have filched a clip from the soap epic and shown him making futile attempts at disrobing Draupadi. Would have been great fun.

Rationalists are being killed—starting with Narendra Dabholkar, then Govind Pansare and now Kalburgi—in pursuance of a fundamentalist doctrine. Two of them were atheists. Where does that leave us? Those who don’t believe in one or many gods, are not allowed to live in India? Three thousand years ago we were worshipping the sun and the moon, wind and mountain. Where were the gods then?

Is brute majority the culprit? If Narendra Modi had headed a coalition would he have allowed his cohorts to spout as they do now? Would ‘Sadhvi’ Niranjan Jyoti, Minister of State for Food Processing, have been allowed to partition the people of India into ‘Ramzadas’ and ‘haramzadas’? And would VK Singh compare (unwittingly— is the man witless?) two Dalit children burnt to death with a stone thrown at a dog? Don’t ever again trust a brute majority— is that the message to the Indian voter?

There is a big task before the BJP and its parivar. They are the guardians of the social fabric of the country. They have to build bridges between Hindu and Muslim, RSS and the Christian Pastors whom they accuse of conversions through fraud, between Dalit and ‘higher’ castes, Dalit and OBC’s, and between believer and unbeliever or rationalist. It is a tall order.