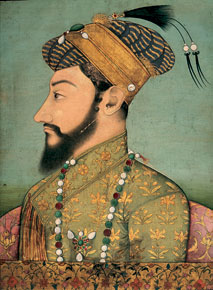 It’s a wonder that the art of the Deccan has been so long in the shade, for the region in which it emerged—a piece of real estate that stretches from the Arabian Sea to the Bay of Bengal across India’s southern centre—underwent a remarkable creative flowering between the sixteenth and eighteenth centuries. That’s when, following an epic migration of traders, soldiers, artisans and inventors to the region, a series of sultans— in vying with holy men for the hearts and minds of their cosmopolitan subjects— sought to project their piety and power by commissioning exquisite works of art and architecture.

The artists of the day responded with uncommon virtuosity and insight. Some of them were grateful immigrants to the Deccan Plateau. As refugees from upheavals in Central Asia and other far-flung (sometimes Godforsaken) places, they brought with them influences such as those of the Persian Renaissance. And so, a hothouse of aesthetic diversity evolved in the heart of the Indian Subcontinent.

While sharing elements of the more vaunted art of the Mughal Empire, Deccani art possesses unique virtues, including colours that range from the nuanced to the audacious (think of a spectrum from Rahul Dravid to VVS Laxman), lines that undulate from bold to vanishingly fragile, and striking compositions. Along with these formal accomplishments, much of the work is rich in allegory, emotional depth and even, in some cases, humour, giving us a sense of what life on the ground might have looked and felt like in south-central India just after the medieval age. All of these sensory and historical revelations are on display at the current, unprecedented exhibition: Sultans of Deccan India 1500-1700: Opulence and Fantasy, at the Metropolitan Museum of Art in New York.

Representing the dominant sultanates of Ahmadnagar, Berar, Bijapur, Golconda and Bidar, the exhibits include weapons, jewels, paintings and other fragments of an empire that ultimately succumbed to the Mughals. Informed by the cultural input of conquering armies, Sufis, mystics, Brahmins, indigenous peoples, Shia Muslims, worldly merchants, competing sultans, African slaves and Europeans, much of the portraiture is also intimate, revealing the individuality, idiosyncratic personalities, and complex political and social relationships of the people depicted.

Take, for example, a work on paper by an anonymous master: Wedding Procession of Sultan Muhammad Quli Qutb Shah, Golconda, circa 1650. A pleasing assortment of humanity surrounds a couple mounted on a horse. The titular groom sits protectively close to his bride—a Hindu, Bhagmati. The dark background and glowing hues of the figures lend a thrilling, romantic aura to the scene, which I’m tempted, mischievously, to call the first visual documentation of ‘love jihad’. One can deduce from this work, in which faces range from deepest brown to ivory, that the Deccan was a racial mosaic, and one in which a legendary love between a Muslim royal and a Hindu girl might be celebrated in a masterly painting.

Another standout from the exhibit, Jahangir Shoots the Head of Malik ‘Ambar, by Abu’l Hasan, circa 1616, exemplifies a particular genre: vision paintings in which artists attempted to represent the imaginations of their patrons. The result, in this case, is a dream-like scene, rich in allegory, in which the emperor aims his weapon at the severed head of his enemy, a powerful general of Abyssinian origin.

A small portrait, attributed by some scholars to an artist known as the Bodleian painter, who worked in Bijapur during the reign of Ibrahim ‘Adil Shah II (1580-1627), shows us the face of spirituality. A mullah, a lone figure wearing a Kashmiri pashmina, and holding prayer beads and a book that might be a copy of the Qur’an, is urbane and dignified, his somewhat careworn expression suggesting one deep in thought, perhaps burdened by a troubled world.

By contrast, in Sultan Ibrahim’Adil Shah II venerates a Sufi Saint, by ‘Ali Riza, Bijapur, circa 1620-30, the religious figure appears at ease, a trace of amusement in the set of his mouth. He relaxes under a canopy while the Sultan, a secondary figure in the composition, presents him with a jewel encrusted spittoon and a canteen with the inscription ‘health and prosperity’. The relationship between spiritual and secular leaders seems often to have been a grey area in the Deccan era. It is unknown whether the Sultan commissioned this particular painting to broadcast his own piety, or whether he himself was a prop in the venerated saint’s PR campaign.

Collectively, the art provides insight into the textured fabric and hierarchical dynamics of society. African slaves, for example, raised in the courts alongside princes, often occupied military leadership roles. In a portrait from Bijapur, circa 1650, the slave Malik Raihan ‘Adil Shah, raised in proximity to Prince Muhammad ‘Adil Shah, is given royal treatment by the artist Muhammad Khan: rendered in ink, water- colour and gold on paper, he is shown decked in fur and holding a petition. The portrait’s subject was, infact, a military commander who conquered territories in Mysore, and, later, a governor.

In Golconda, a less illustrious slave, depicted in the third quarter of the seventeenth century, is shown clad in pristine white robes and rings: he strikes a jaunty posture that broadcasts self-confidence. Modern-day Indians, often so contemptible in their treatment of the Africans in their midst, could learn a lesson from the Deccan of yesteryear.

The show at the Met makes plain that Islamic prohibitions against imagery were unenforced in the Deccan sultanates. Calligraphy thrived, too. (A short digression here: It is my view that one of the upsides of the harsh Islamic anathematising of the image in art was the flourishing of beautiful calligraphy. It’s as if the artistic energy of a civilisation was redirected to the beauty of its lettering, especially since Qur’anic calligraphy was the veneration of God’s word.) In one seventeenth-century work from Golconda that may or may not have been a creative response to restrictions on imagery, Calligraphic ‘Alam in the Shape of a Falcon, the problem is solved by rendering the form of the bird all in script, constructed of perforated gilt copper. The effect is almost modernist in its airy simplicity.

My favourite portrait is one of Aurangzeb, done when he was a prince. He defied one of his older brothers (his father’s favourite, whom the younger prince loathed) and built a palace for himself in Aurangabad, establishing his own power base. This ‘art-hating’ man, as conventional wisdom would have it, in truth became an active patron, with a painting atelier within his palace walls. There, artists from all over the Deccan, and senior ones from Delhi, beavered away until the Prince headed north to wage civil war against his siblings. In a profile portrait from the 1650s, the jewel-bedecked royal appears disciplined and resolute, gazing into the distance toward his violent destiny.

There was a lighter side to life in the Deccan, too, as illustrated in Nobleman at Repast, from Aurangabad, painted around 1700. In this good-natured portrayal, a man identified as Farrukh Fal, or ‘Omen of Fortune’, who was in fact a Mughal officer in Agra in the second half of the seventeenth century, tucks into a sumptuous spread. His physique is just as abundant as his repast, and he looks rather like Shammi Kapoor did in his ‘bloatage’. An account by an Italian physician who visited him suggests that this man-mountain avoided appearances at court for fear of ridicule. Nevertheless, his humanity and his extraordinary milieu are justly celebrated at the Met. He may have been remarkably fat; but once painted, he was beautiful.