Why the Scottish vote against independence is good for British Indians 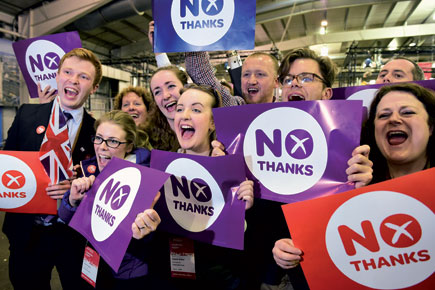 Why the Scottish vote against independence is good for British Indians


India, by and large, brooks no discussion of ‘self-determination’ for Kashmiris, Mizos, Nagas, and others who aren’t entirely happy with their lot. Frozen non-negotiably in their status as citizens of the Republic of India, these malcontents have been put firmly in their place by New Delhi, which hasn’t always been gentle in its handling of their political demands.

So it came as no surprise that Indians would regard the Scottish referendum in the United Kingdom with bewilderment. How could a country submit itself voluntarily to potential dismemberment? India watched, and shuddered, even as its more sophisticated citizens pleaded guilty to a quiet envy of Britain’s peaceful exercise in national redefinition. And as Scotland declined the offer of independence, India breathed a sigh of relief. It is an axiom of Indian politics that separatists are Bad Guys.

Mighty relieved, too, I imagine, were the Indians who have made Britain their home, immigrants and their children (and grandchildren) who now number 1.4 million people, the largest non-indigenous ethnic group on the British Isles. For them, a vote for Scottish independence would have been a grievous blow.

Why do I say that? My thesis is that after the nearly seven decades since they first began to flock to Britain, British Indians are now substantially integrated, both in the perception of the host community as well as in their own minds. They regard themselves—and are regarded—as British. Britishness is an idea embedded in their way of life. They may fail the Tebbit Test, formulated by Norman Tebbit, a member of Maggie Thatcher’s cabinet, which demanded that an immigrant cheer for England at cricket and not for his country of origin. But failing that test is, in fact, an ironic mark of Britishness. Tebbit became a figure of ridicule for it, among English and immigrant Britons alike.

British Indians have worked mightily to cement their Britishness. They have integrated extraordinarily well into mainstream British life. In this respect, they have mirrored the integration in the early and mid twentieth century of Jews, who have become all but invisible except sometimes by name, or by stereotypical association with a particular walk of life. While retaining a sense of cultural difference seems to be important to young people of Indian origin, this does not turn into apartness. Indians are active participants in all shades of political and cultural discourse, and intermarriage with Whites and others—what anthropologists would call exogamy—is common.

Any unravelling of the United Kingdom in a referendum could have put these British Indians in a position where they would have had to renegotiate the terms of their Britishness. They would have had to do so in a country where that idea had a diminished potency, a country suddenly—and nakedly—more English than British. The advantage of a British identity is that it is conceptual at root, not ethnic. It is much harder for the descendant of grandparents from Gujarat to argue that she is English. Being able to assert Britishness, on the other hand, is a function of assimilation.

People of Indian origin in the UK are not English, Scottish, or Welsh. Their primary civic identity is British. The UK, like the US, is a state that doesn’t rest on bloodlines. It requires no more than loyalty to a set of values: in the UK, these would be the rule of law, fair play, and the English language. However hard it may be for immigrants to integrate and overcome prejudice, the ‘idea’ of Britain remains a strong one (and can offer great solace, however badly English, Welsh and Scottish individuals may behave). So any threat to Britishness—as was posed by the Scottish referendum—would make life difficult for the Indo-British.

Note, here, that I focus on British Indians, not British ‘Asians’ in general. British Indians are much better integrated, more in harmony with the idea of Britain, than British Pakistanis or Bangladeshis. This is so for several reasons.

First, a general observation: Britain is, quite simply, a lot less racist than it used to be, especially among younger generations who have been brought up in a flamboyantly multi-ethnic country. This has made it easier for Indians (as well as everyone else) to feel at home in the UK. But there are particular observations, too: British Indians are demonstrably keener to integrate than are British Pakistanis or Bangladeshis, who feel much less comfortable adopting a Western way of life. Perhaps this is because Indian immigrants were better educated and less rural in the first place. More likely, however, it is because the predominant religions among British Indians—Hinduism and Sikhism—do not hinder assimilation.

The main problems with integration among immigrants from the Indian Subcontinent have been with Muslims, especially post-9/11. Indigenous Britons feel more ill at ease with Muslims (especially the visible markers of separation, such as their dress, or with the cultural vigilantes in some Muslim neighbourhoods). And Muslims are unusual among immigrants, in that their second or third generations are often as hostile to their host country—sometimes even more so— than their parents. As a result, there is much less talk of ‘British Asians’ than there used to be: It makes no sense to lump together integrated Hindu or Sikh Indians with alienated Muslim Pakistanis or Bangladeshis. Economically, too, the groups are poles apart, with British Indians among the wealthiest in Britain in terms of household income. Pakistanis and, in particular, Bangladeshis, are startlingly poorer.

British Indians have cause, for the moment, to celebrate the UK’s survival, and with it the survival of their socio-political status, dearly won. These immigrants have invigorated Britishness, and have come to have a powerful stake in it—even as many nationalist Scots, incurably recalcitrant, seek to fritter it away.