Donald Trump, From A to Z 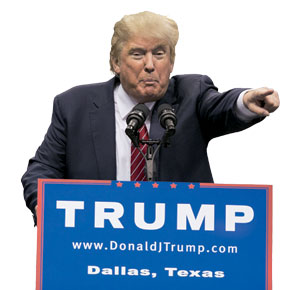 Coarse as hell, bombastic and misogynist, a blunt-spoken nativist with an almost cartoon arrogance, Donald Trump offers the textbook picture of a candidate unsuited to any elective office—however picayune— in the world’s most politically correct democracy. And yet he’s the clear (and effortless) frontrunner in the mucky marathon race for the Republican Party’s presidential nomination.

This reflects not merely the famine in the Republican field, but also the defeatism that has paralysed the party—a collective resignation to a rout in 2016 that has mutated into a theatre of the grotesque, with Trump as the rampant (but ultimately impotent) anti-hero. For those of you who are transfixed, here’s a brief Trump Primer:

A is for ’merica (the ‘A’ is silent), where aliens from across the southern border flock to have their anchor-babies, children with a right to US citizenship that Trump would seek to deny (the pesky Constitution notwithstanding).

B is for braggadocious, an adjective used by a gleeful Trump to describe himself in his opening statement in the last presidential debate. Contrary to popular media belief (and most likely his own), he didn’t invent the word.

C is for China, China, China, Trump’s one-country foreign policy. “Their leaders are much smarter than our leaders,” he has lamented loudly. “China in a trade deal? They kill us.” But things will change when he’s in charge: “I beat China all the time. All the time.” At least his bouffant is better than Xi Jinping’s.

D is for Democrat: he was one, before he switched sides. And debates, where his bare knuckles give him a certain advantage. And daughter—or dating, or dating your daughter. “If Ivanka weren’t my daughter, perhaps I’d be dating her.” He said that in jest; but I wager Ivanka was glad—for once—that she was his offspring.

E is for ego. Which requires no further comment than Trump’s own: “Show me someone without an ego and I’ll show you a loser…”

F is for Carly Fiorina and her face, which Trump disparaged in words that were uncouth and witless. “Look at that face! Would anyone vote for that?” he said of his only female Republican rival—prompting her to shame him in the last debate, and confirm the truth of that old aphorism about a woman scorned.

G is for God, the only author who can write a better book than The Art of the Deal, Trump’s self-styled ‘best-seller’ and his own “second-favourite book of all time.” Trump’s favourite book? The Bible, of course. In this, at least, he’s shown himself to be a tediously conventional GOP politician.

H is for Hillary, of whom Trump has said, “Unlike me, she isn’t rich enough to be incorruptible” (which is not, of course, for want of effort by the Clintons). She watches the Trump-induced disarray in the GOP with obvious relief, and is relieved, too, that there’s at least one other politician whose hair (toupee or not toupee?) is the subject of non-stop scrutiny.

I is for immigrants, illegal or otherwise, for whom Trump— the grandson of an i-word himself—has only contempt, and about whom he sows fear in ordinary ’mericans. Another pet scare-word is Islam, guaranteed to send his camp into paranoid freefall.

J is for Jeb Bush, the Republican party’s anti-Trump and the target of The Donald’s choicest vitriol and derision. He mocks Bush Jr for his name, for his brother’s invasion of Iraq, his “low energy”, his political privilege and—the most uncool barb of all—his Hispanic wife.

K is for Megyn Kelly, the reliably blonde but refreshingly combative Fox News host, who took Trump to task for a lifetime of sexist remarks. Flaying her questions as “ridiculous”, he gave Kelly—and women everywhere—fresh ammunition by saying of her interview with him: “You could see there was blood coming out of her eyes. Blood coming out of her wherever.”

L is for Latinos, who’ve reacted with indignation to Trump’s constant disparagement of Spanish-speaking immigrants. Under pressure from activists, Macy’s took Trump merchandising off its shelves—who buys that stuff, anyway?—and ethnic leaders are exhorting voters to turn out and make guacamole of The Donald.

M is for Mexicans and John McCain, who provided the two lowest of Trump’s many repellent campaign moments. On people from south of the Rio Grande, Trump is startlingly racist: “They’re bringing drugs. They’re bringing crime. They’re rapists.” Of the Republican elder, decorated for his valour as a POW in Vietnam, Trump offered a view that should have cost him the race: “He’s not a war hero because he was captured. I like people who weren’t captured.”

N is for negotiation, a skill Trump has fetishised in a campaign which puts him on a pedestal as the billionaire businessman who knows how to horse-trade and seal a deal—in contrast to all those politician-patsies who turn to jelly at a bargaining table. Under Trump, no one will “rip America off.” (N is also for narcissist.)

O is for Obama, the bête noire, as it were, against whom the forces of Trumpism are so gaudily ranged. In Trump’s view, the American president is feckless and foreign, a man who’s made government bigger and America smaller, while nursing an animus against Christianity (the subtext: he’s Muslim). Obama has taken this Trump l’oeil in his stride. “My issues with Trump,” he’s joked, “go back to our childhood together in Kenya.”

P is for Putin, with whom Trump said he would “get along”, in that part of the last debate where the candidates played at foreign policy. “I would talk to him,” Trump stressed, emolliently, adding for good measure that he’d “get along with a lot of the world leaders that this country is not getting along with.”

Q is for Quixotic—oops, a word of Spanish descent—that sums up Trump’s bid for the presidency. He’s tilted at windmills and offered us great amusement, not all of it intentional. Will Sarah Palin be his Sancho Panza?

R is for the Republican Party, which has been body-snatched by Trump, taken over in a coup de theatre that has had a nation rubbernecking in disbelief. Yet the party—bewildered by this unicorn in its midst—gave Trump a pass for months, leaving even his assault on McCain unchallenged. It has awakened, now, to the enormity of Trump; but is it too late?

S is for smart, another Trump term of self-congratulation, as in: “I went to the Wharton School of Business. I’m, like, a really smart person.” In a more self-deprecating tone, he tweeted a quote from Albert Einstein: ‘It’s not that I’m so smart, it’s just that I stay with problems longer.’

T is for tasteless, tacky, tawdry, trashy, tone-deaf, truculent— and teflon: too little that Trump has done or said on the trail has come back to hurt him.

U is for Univision, the Spanish-language US network whose top anchor, Jorge Ramos, fought a memorable duel over immigration with The Donald at a press conference, prompting him to snarl at Ramos, “Go back to Univision.” (This was dog- whistle-speak, one presumes, for ‘Go back to Mexico’.)

V is for Vietnam, which Trump managed to avoid when of conscription-age, a fact brought up by his critics when he dissed McCain. In a response born of thick skin and vivid imagination, Trump likened his attendance at a military high school to being in the army—and at war.

W is for the wall he’ll build between the US and Mexico. Vaunting his negotiating skills, he’s said, “I will build a wall and Mexico’s going to pay for it, and they’ll be happy to…” The border barrier is a winner: Any talk of ‘the Great Wall of Trump’ sends his largely blue-collar supporters into a state of Mexican- free nirvana.

Y is for “yooge”, Trump’s distinctly—and gratingly—New York-Outer Borough way of saying ‘huge’. (Trump was born in Queens, which, at 109 square miles, is the ‘yoogest’ of New York’s five boroughs.)

Z is for the American zeitgeist, which Trump has captured with his raucous populism and his quiverful of zingers. And yet, four months into his remarkable campaign, is it surprising that so many of us just want the man to zip it?