The gramophone era in India made stars of gaanewalis who would otherwise be heard only at mehfils. Experience the ethos of the time, and find out how vinyl records, with their three-minute format, came to change social norms in the 20th century. 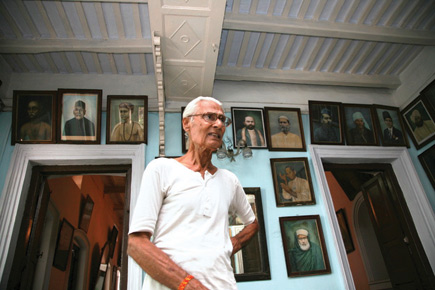 Vinyl records, with their three-minute format, came to change social norms in the 20th century.


He took us into the Ghosh bari (home) with a sense of old world duty. As we walked around, he led us into the performance hall and the billiards room. He didn’t say much as we looked in amazement at the portraits of the singers who had graced the bari with their mehfils. It was quite overwhelming to see Malka Jan, Hirabai Barodekar, Gangubai Hangal and several such legends staring at me from a wall that filled the room with an almost mystical atmosphere. They had all performed in this very space.

Then I mentioned Kamla Jharia in our conversation with this caretaker. Ghanti Babu, about 85 years old, transformed into an excited young child who suddenly had much to say. He was surprised that we had heard of her and told us that he had heard her live several times in this very bari. She was a frequent visitor, as were many other greats like Gauhar Jan, Sunderabai, Abdul Karim Khan, DV Paluskar and, in later years, even Vilayat Khan and Bade Ghulam Ali Khan.

Ghanti Babu took us to the room where Bhatkande, a noted musicologist, had lived for months. When I asked where in the bari the baijis had stayed, he said the “bais were put up in another house near the bari, never in here”. This is, incidentally, also the bari where the significant All Bengal Music Conference was set up in 1934.

Ghanti Babu’s is a first-person account of the general endorsement that even though baijis, or singing ladies, were important to the world of performance, they were perhaps not really a part of the mainstream discussion and discourse on music in India. While it is estimated in discographies that over 500 women were recorded in different regional languages all over India, little is known about these artistes. This is a legacy that has largely been preserved through the gramophone records that first made their appearance in India in the first decade of the 20th century.

The advent of sound recording changed the listening experience of music forever. It paved the way for the making of singing sensations and stars, and redefined the world of entertainment in ways that still have an impact in the 21st century. And clearly, women were at the forefront of this phenomenon. These vocalists took on the challenge presented by this new technology—mainly, of presenting their work in approximately three minutes, this given the innately improvisatory nature of Indian classical music.

The range of music they had proficiency over was tremendous—Khayal, Ghazal, Kajari, Chaiti, Thumri and Tarana, and Bhavgeet. Zohrabai Agrewali is said to have mastered the art of presenting a Khayal in this new three-minute format and inspired greats like Aftab-e-Mausiqui Faiyyaz Khan and the Patiala doyen, Bade Ghulam Ali Khan Sahib. Collectors estimate that the number of records issued in India would amount to about half a million—a large corpus of which remains unheard of and inaccessible to contemporary audiences.

Recorded music came to India in 1902 with a recording by Gauhar Jan, the star of her times. Gramophone companies, initially run by Americans and Europeans and not by upper caste Indians, actively recruited baijis for their early recordings. One of the first recording engineers, Fred Gaisberg, writes in his memoirs:

‘All the female singers were of course from the caste of the public women, and in those days it was practically impossible to record the voice of a respectable woman. The songs and dances were passed by word of mouth from mother to daughter. But recording expenses were heavy, since most of the artists had to be trained over long periods before they developed into acceptable gramophone singers.’

The new medium of recording evoked a mixed response and was received by musicians both as a threat and an opportunity. Many great masters like Pandit Vishnu Digambar Paluskar, Balkrishnabua Ichalkaranjikar, Bhaskarbua Bakhale, Alladiya Khan and several other renowned musicians of that period did not record for many reasons. Some feared their work could be stolen and passed off as someone else’s. Some did not want their cultural capital to be transferred to those who didn’t deserve it. It is said that a senior Ustad once refused to do a recording because he did not want to profane his art by making it available to “any common courtesan” who could afford to buy a record.

The ones who became celebrities were clearly affluent and lived posh lifestyles—Sunderabai owned an entire floor opposite VT Station in Bombay, Janki Bai Chaapanchuri is said to have had 14,000 gold coins showered on her in the Chaudah Hazari Mehfil.

The gramophone record revolutionised ways in which music was heard, and gradually also started to craft new social norms. For one, the commercial success of the record made this avenue an attractive option for many musicians, both performers and accompanists. The anonymity the record offered also brought forward artistes from other communities.

This was also the time of the nationalist movement—a struggle against foreign rule, but also one with a reformist agenda. But baijis faced a strident and severe attack from reformers within their own society. Their profession was condemned and they were branded as ‘loose women’. The nationalist elite objected to the shrill voices of these baijis, and ultimately, they started losing opportunities of singing on stage. Initially, many of the women singers joined the newly-emerging All India Radio. But after Independence, those who continued to be ganewaalis had to deal with the indignity of All India Radio insisting that its female singers be married.

Many baijis then moved to the theatre and films, given their understanding of the social stigmas faced by their community, and sensing the opportunity encoded in cinema for a potential career change. Some, like Jaddan Bai, better known as film actress Nargis’s mother, therefore moved from being successful and respected performers to becoming film producers and actresses.

There are many such stories of struggle, courage and marginalisation, as gaanewalis made history: from being mere entertainers to people who had generations of camp followers, creating the way for a new language in performing arts for women performers in India.

Vidya Shah is a vocalist and director of Women on Record, an exhibition and live performance being launched by the Centre For Media and Alternative Communication, and supported by Ford Foundation.