Delhi’s upper middle-class has never cared to be seen rubbing shoulders with the city’s plebeians who use public transport. Which is why it’s so surprising to see how well they have taken to the Metro 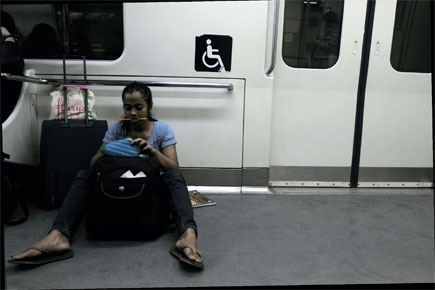 Delhi’s upper middle-class has never cared before to be seen rubbing shoulders with the city’s plebeians who use public transport.


As anyone who’s tried to break into la-di-da Delhi knows, this city has some concentric circles, which seem to spiral forward through time. Circles with exclusive boundaries—that is, till the evisceration of this system of snobbery started taking place through the Delhi Metro.

There’s nothing quite so democratic as efficient public transport, don’t you find? You never know who the person next to you, or in the next coach, could be. Given the bubbles we live in, that is priceless. You see so much more than when you’re hermetically sealed inside your own zone.

A young teenage couple takes the Metro together, cut off from the rest of us in their insularity. A middle-aged woman in a sari trails her son with special needs as they walk out of the station. A college boy drops his girlfriend off at the station and heads back to wherever he emerged from. A heavily accented, giant designer bag-toting, foreign-returned loud-mouth girl on the phone stands a few feet away from a middle-aged woman slumped in her seat. The jibber-jabber of kids in school uniforms, with their little cliques, takes you aback. The energy of children running from pole to pole, infectious as it is, brings a smile to most faces. You might even see the odd cricketer doing the Metro-as-tourist-attraction. You never quite know who you’ll find.

Every once in a while in the city, I find that people do a double take when they see me, and I’m never sure if this is because of the visibility of my job as a news anchor, or because, like some people, I have the sort of face that looks familiar. My brain isn’t yet wired to go from ‘Hey, that person knows me!’ to ‘Must be a viewer’, or worse, ‘a fan’ Sometimes, strangers, even in unlikely places like the local Mayur Vihar market, come up for a chat. But surprisingly, this has never happened on the Delhi Metro.

More than once, though, I have spotted a junior or an intern from our office. And that can be odd. I’m very prickly about privacy, so it throws me sometimes. But it’s still not half as embarrassing as being spotted on a cycle rickshaw (yes, some parts of Delhi and Noida still have them). Then, the inner monologue can range from the utterly sanguine to full-on neurosis: ‘Do I look totally lame? Why am I not whizzing by in some fancy Beamer?’ But I eventually do quell my inner snob.

The Metro is changing a fairly rigid social stratification in the city. It is class-representative and class-inclusive in a way regular trains and planes are not. No AC First or second classes here, no business class or executive class coaches. You cannot have your own exclusively demarcated space. It may not mean much yet, but the lines are blurring. And how can they not? You’re all milling around, sitting together when you’re lucky, jammed up against one another when you’re not.

We’re all here: from arch conservative baby-toting aunties, to hip young things with trendy clothes and bags, to schoolchildren, to working people. Not the working class so much as the Working People of the city. Here we all are, zipping along Metro tracks both above- and underground. Young, old, middle-aged, single, newly-married, long-married. I see some long-suffering and some chirpy faces. From the north, south, east, even the phoren. It’s a smorgasbord, and most people are busy doing their own thing. It takes some absorbing—because it is so un-Delhi.

I speak for the ladies coaches, I hasten to add. A few days of rush hour will beat all that feminist posturing out of you. Forget the cliché about the sea of bodies. Physical discomfort you can withstand for a few stops, but the Indian summer is no one’s friend, never mind those aesthetic deodorant ads. I have been so miserable and acutely aware of dwindling oxygen levels that I have made a list of times to avoid, at least on my Metro line: Noida-bound 8.15 am (avoid), 8.25 am (standing/breathing room), 9.50 am (standing/breathing room), and so on.

I’m surrounded by women of all sizes, shapes and ethnicity who can’t shake off that Delhi habit of staring. Usually not lecherous, it’s often a curious stare, or a ‘check her out’ stare, but most people are simultaneously involved in something else: in conversation, or on their phones, or reading, or plugged into iPods. I cannot for the life of me categorise beyond a point: There are no obvious behenjis, but then again, there’s no obvious hoity-toity type either. It’s not homogeneous, but some sort of osmosis is going on.

One thing we have in common: I notice most of us have more than one bag. My second bag is a food bag, which doubles as a book bag. (Yes, news anchors sometimes do utterly banal things like pack their own lunches.) Next to my bag advertising the far-off Strand, Marks & Spencer makes space for Pankaj and Nidhi (labels I’ve never heard of). There’s a Bata bag peeping out as well. You name the brand, it’s probably taken a Metro ride or two. And then, of course, there are the software professionals with the massive laptop backpacks.

All pretences aside, it took me a while to overlook the ‘pleb’ side of things. I first ‘did’ the Metro a few years ago. A friend took me one stop from Rajiv Chowk and back, just for the novelty of it. Then it became a way of life. I used to tweet while I travelled. Grumbling mainly—that’s #grumble if you’re on Twitter—and feeling slightly supercilious. I got to play it both ways. Like, look at me, I’m taking the Metro. I don’t live in a bubble like everyone else I know. The edginess, the street cred. This is what being a writer is all about. I’m so authentic.

And yet, I was taking the Metro in such a utilitarian fashion as to be profoundly un-cool. Ideally, I should have been taking it just to be anti-establishment, not because I had to—the horror. To be perfectly honest, I felt like quite a have-not at first. Isn’t it interesting that being born to certain privileges but not actually possessing the markers of such a lifestyle can lead to class displacement? It’s not just an internal judgement—my not fitting into a clear box confuses other people as well. After all, we look for, and tend to aspire to, symbols of ‘having arrived’.

It took me a while to work past the chip on the shoulder, or decipher the mockery of the materialistic and entitled, chauffeur-driven South Delhi princesses I know. There is a certain amount of angst there—not enough to make me commit to the purchase of an automobile, God forbid. Every once in a while, I do feel I should have been more ‘settled’ by this age. And that includes having my own car. Then I think of rush-hour traffic and road rage, and laugh at you lot.

For someone like me, the Metro is nothing short of a marvel. It runs on time, is incredibly convenient, and has transformed my life. I feel lucky because I’m well aware that navigating this city as a woman is a fragile truce at best. Especially travelling independently, when sometimes fatigue is your worst enemy. You need to be alert at all times, no quarter given. That’s the Delhi way. While Metro rides are perfectly safe, or have largely been so till now, it’s the Metro stations I worry about. They’re not often well-lit, or particularly appealing, so walking out of them can be a source of stress.

A car screeched close to my Metro stop the other day, and I simply couldn’t bear to turn around to the young man who got out, ‘Ma’am’ing’ me quite insistently. To this day, I don’t know if he was a viewer, a tweeter, a friendly soul, or a potential axe murderer. I’d rather not find out, especially not around dusk.

The one thing the Metro can’t help Delhi figure out is night transport. Radio cabs are safe by and large, but expensive, and also not always reliable. People, friends even, can prove most unreliable. This is the kind of city where you need to check that your girlfriends have reached home safely. I’m still recovering from the trauma of being left high and dry at Mehrauli at around 2 am one night. Luckily, there was another girl with me and an auto with a non-sleazy driver. (Though there was a group of men, in a car, offering us a ride as well.) That led to some serious questioning of life choices. Should I have a car and driver for moments like that? I mean, the Metro doesn’t run all night, more’s the pity. But perhaps that’s the secret to its success. It doesn’t promise more than it can deliver. It’s not 24 hours on-call.

The thing about owning a car, I imagine, is—like most luxuries that transform into necessities—that once you have one, you simply cannot imagine life without your own set of wheels. I felt this way as a younger person about air-conditioning.

I will tell you this, though: I’m not alone. I know of at least two leading editors who Metro it down from Gurgaon to their offices in the heart of the city, and make sure they time their lives so as to take the last train back. I’ve spotted the editor of a leading Hindi news channel, too, at a Metro station, and of course, I have my Metro Friend—an ex-colleague who I bump into only at metro stations.

The circles, they’re a changing.