Namrata Zakaria on the First Family’s enviable wardrobe, and why their sartorial sense matters so much 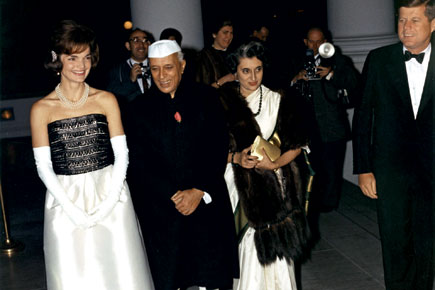 Namrata Zakaria on the First Family’s enviable wardrobe, and why their sartorial sense matters so much


It may be termed an unusual choice, but Sonia Gandhi can easily be the most chic woman on the Subcontinent. Yes, her debut on Vanity Fair magazine’s annual Best Dressed list is long delayed (do take note, Graydon Carter). And please put her on your cover, Vogue India; morph her on to Ananda instead of Amethi if you like.

The Congress chief may have chosen not to be Prime Minister, but she couldn’t help but receive another bequest: her Prime Minister mother-in-law’s moniker, the High Command. This makes Sonia Gandhi India’s veritable First Lady, and the woman who holds the most powerful political position in the country today is no less a national fashion icon than Michelle Obama or Carla Bruni-Sarkozy.

To take an Italian’s sartorial threads from her is sacrilege. Italy-born and raised, Sonia flaunted trendy Italian labels during her years at Cambridge but gave them up at 21 when she married the man who would be India’s swishest and arguably most-loved Prime Minister.

What is commendable is that Sonia Gandhi has deftly avoided any hint of a chiffon-and-pearls get-up, something that would perhaps suit the royal treatment this country serves her. Neither does she wear a Tarun Tahiliani chikankari kurta, or a Rohit Bal Kashmir-embellished anarkali. She prefers an ethnic handspun Indian sari, a seemingly ordinary one at that.

So why is she a bigger fashion icon than Sonam Kapoor? Sonia G wears khadis that may appear gauche and ungraceful to fashionistas, but are very sentimental to rural India. She doesn’t just wake up in the morning and randomly pull one of her fabulous collection of handspun saris; her dressing up is a studied exercise. When she’s in Madhya Pradesh, she wears the Chanderi or Maheshwari, local weaves of that state. When she is in Odisha, she wears a Sambalpuri ikat. (The ikat seems to be her favourite; the tie-dye-weave is also tres au courant among global fashion houses.)

Maneka Gandhi once remarked that Sonia Gandhi had inherited Indira Gandhi’s entire wardrobe. The senior Mrs Gandhi had handpicked her splendid collection of handspuns from different regions in the country.

In fact, a new theory even suggests Sonia is picking up saris from states with separatist movements now or states that are in conflict with the country’s Maoists. This seems to be an attempt at appeasing people living in impoverished and strife-stricken areas of the country.

The older Mrs Gandhi had the now deceased Usha Bhagat help her choose her textiles; and Bhagat also helped Sonia for a while. Now, of course, all ladies in the Congress know of her penchant for local weaves. Sonia Gandhi’s knowledge of textiles is also immense; at Kapil Sibal’s son’s wedding, she complimented a guest on her sari, recognising its motif and provenance.

After Bhagat, Archana Dalmia, who incidentally heads the grievance cell at 10 Janpath, is said to be picking up textile saris for Sonia and Priyanka Gandhi. The very attractive Dalmia reportedly visits several textile conservationists, the likes of Pranavi Kapoor, and is sometimes seen at the capital’s fashion weeks too.

“I have known Archana since college days and have invited her as a guest for fashion weeks. But I’m not aware of her buying anything for anyone,” says Sunil Sethi, president, Wills Lifestyle India Fashion Week. Dalmia has been a guest of designers Anjana Bhargav, Varun Bahl and Gaurav Gupta, and is said to have introduced Mrs Gandhi to a couple of Bahl’s embroidered jackets; since Sonia Gandhi doesn’t favour embroideries, one hears, she declined wearing them.

“I have no comments. I’m a very private person,” says Dalmia on being contacted for this story, adhering to a Sicilian secrecy code expected of the Congress’ inner circle. “All I can say is Mrs Gandhi is the best dressed woman in Parliament.”

During her 1999 campaign, Gandhi reportedly studied videos of her mother-in-law’s speeches, and nattily adopted Indira Gandhi’s style and mannerisms. Her hair colour deepened from light to dark, nearly black brown. (Incidentally, a hairdresser from the Surya Sofitel salon has been coming over to tend to Mrs G’s tresses for years now.) She also took to wearing a man’s large wristwatch, just as the senior Gandhi had in her time.

In an effort to be like her mother-in-law, she also wears her saris with deliberate modesty. Her clothes also help disguise her slim figure and Western gait. Neutral colours are chosen, and the saris are always thickly starched and clinically draped. The sari blouses are even more subtle—the backs are as high as her nape, sleeves till her elbows, and the waists offer no peeks.

Sonia Gandhi hasn’t always been such an obvious Indophile. When she married Rajiv Gandhi (in a pink Banarasi sari) and moved to India in 1968, she didn’t seem too sold on Indian clothes. Soon after, she caused a minor furore when she was photographed in a mini-skirt, sucking on a lollipop. Her love of textiles clearly comes from her mother-in-law, whom she grew close to.

As for Rahul Gandhi, if there’s anything similar between him and Samajwadi Party scion and Uttar Pradesh CM Akhilesh Yadav, it’s their propensity for khadi kurtas worn with the long Indian tunic waistcoat. The uniform of India’s young politicos (think Jyotiraditya Scindia, and you will agree) is what Rahul Gandhi saves for his public life. (Although he does sometimes wear a delicious bomber jacket.) Shy and reticent, he lives a very quiet, secluded and discreet private life that he shares with very few. “He’s also the most boring dresser,” says a family friend who would be the same age as him. “It’s always jeans and Polo or Lacoste T-shirts for Rahul, barely anything else. He does have a penchant for sneakers, though. But yes, thank God he’s a boring dresser.”

In 2008, Rahul wore a grey wool suit with a matching tie for the coronation of the Bhutanese king. While he has worn a bush-shirt and trousers at meetings, it’s his turtleneck with jeans and a dinner jacket for a Slumdog Millionaire party that has been his biggest sartorial letdown yet.

Rahul Gandhi may not be as suave a dresser as his father Rajiv Gandhi was, but he does share many interests with him. “Their love for speed manifests itself in many ways,” says a society watcher from New Delhi, “Including a fondness for the go-cart racetrack.”

He does take too many casual outings. He has frequented Ramola Bachchan’s restaurant Manre, but often in the company of his family, especially sister Priyanka and her husband Robert Vadra. At such times, onlookers say he’s almost never with security personnel.

It’s the even more reclusive Priyanka Gandhi Vadra who style keepers are especially interested in. She brings on the early sheen of grandma Indira, some say, a boot polish swipe of L’Oreal notwithstanding, the senior Mrs Gandhi of the late 1960s, who was elegant, exuberant and democratic before she was corrupted by sycophancy, bureaucracy and Licence Raj attitudes that bedevilled the latter-day Congress.

In her younger days, Priyanka Gandhi would wear maladroit Fabindia (these were the days before Fabindia elevated its status) with a hairstyle that reminded you of a Bon Jovi-esque smoke cloud. She married Robert Vadra in a pink cotton sari, woven in jail by her great-great-grandfather Motilal Nehru. She looked quite the simple and luminescent bride, as she posed along with her new husband, Sonia and a turbaned Rahul Gandhi.

Even on the most momentous occasions, the Gandhis are sworn by discretion in their taste. Those even remotely close to the family swear by their refined restraint. If austerity is a must for a life in politics, a benchmark set by the Mahatma himself, elegance is the family’s contribution to the concept.

In a later family picture, with Robert and their kids, Priyanka wore a white chiffon with small black flowers printed all along it, unwittingly looking quite the classy Rajasthani royal.

It’s Robert Vadra who has been labelled ‘flash’ for his penchant for tight T-shirts, leather bombers and designer sunglasses, but insiders say he appears flamboyant because he’s an avid fitness junkie. At Swarovski’s tenth anniversary party recently, observers note, Vadra was very much the fashion victim.

Vadra’s love for style is sometimes mirrored in his wife. Look at her now: she’s graduated to über stylish basics, black-and-white combos that are terribly modish, and a figure that’s beautifully gym-toned. Her gorgeous pixie hairdo cannot be acquired from a home-delivery hair stylist.

The first time Priyanka Gandhi wore a white shirt with black trousers to Parliament, her smiling photo was on the front page of most national dailies: “Here’s the woman we want as Prime Minister,” urban Indians naively suggested in their drawing rooms. And her after-hours dressing has only got slinkier, more tailored of late, and could even be called ‘provocative’ by bureaucratic standards.

On one visit to listen to her brother in Parliament, Priyanka wore a fitted white shirt with ruched buttons at the chest and lace-up sleeves, and narrow black trousers. Mums at Shri Ram School, Vasant Vihar, where the Vadra children study, say she turns up in ordinary casuals and popular high-street labels. On one visit, she wore a snug grey T-shirt with a V-neck. She does wear the occasional high heels, and her metamorphosis is delicious.

“You have to look at Priyanka in the ‘modern Indian woman’ context: she is a mother with two young kids after all,” says a family friend, describing her style as “clean, spare and elegant”. Priyanka Gandhi also loves monochromatic scarves of what looks like beautiful fabric, and long skirts.

When she stepped out of her sequestered life to campaign for her brother in Uttar Pradesh in February this year, she stormed the front pages again. Memories of Indira Gandhi flushed through the nation again, and the Congress saw a glimmer of hope (it was mistaken; its UP loss still rankles).

While campaigning, she wears her mother and grandmother’s uniform of handloom weaves. The blouses have no back-cut; you can’t see her neck. Her sleeves are almost at the elbow. She has sweat pods under her arms, the mark of a true grassroots worker. But her feminine manner and grace can’t be missed, and she always sports an endearing smile.

“The Gandhis have an enviable collection of handloom saris,” observes a senior journalist with a national daily. “They are what you might call ‘museum pieces’. Priyanka has clearly acquired her fondness of them from her mother and grandmother.”

The Gandhis clearly believe in representing the idea of India through their wardrobe choices. As a mark of patriotism, their handloom preference has been adopted by an entire political culture in Delhi. However, what marks the Gandhi family out is that their sartorial choices—even if it’s a simple silken weave—are so decisively made and eminently elegant, that they can scarcely ever be accused of falling victim to the drabness of faux-ethnicism.

And if all fashion is but a political statement, who better than the Gandhis to make the point?

Namrata Zakaria is a fashion and lifestyle columnist with The Indian Express. Her column ‘Flair & Square’ celebrates a decade in publication this year. Zakaria has also been a contributor to Elle, Harper’s Bazaar, GQ and Man’s World