The Abbey Road to Rishikesh

India had a tremendous influence on the Beatles and their music. Many a song came about just hanging around the Maharishi’s ashram at Rishikesh. So the Beatles’ double album is really a hymn to India 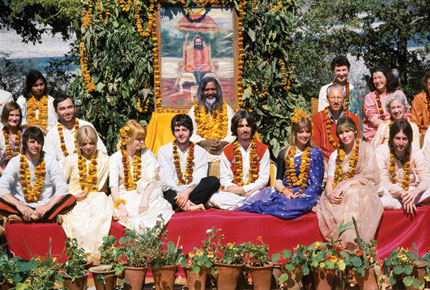 India had a tremendous influence on the Beatles and their music. Many a song came about just hanging around the Maharishi’s ashram at Rishikesh.


India was to have a profound effect on the Beatles and their music, ever since George Harrison first heard the sound of a sitar when the group were filmed in an Indian restaurant during the making of Help!  He introduced the sitar into the Beatles music while recording John Lennon’s song Norwegian Wood (This Bird Has Flown), recalling, “I bought a cheap sitar from a shop called India Craft in London. I hadn’t really figured out what to do with it. But when we were working on Norwegian Wood… it just needed something.”

In 1966, George began studying the instrument under Ravi Shankar and continued to be inspired by Indian music, recording several numbers incorporating Indian instruments or using Indian musicians to accompany him.  Another example is Love You To where he played the sitar like a guitar and featured instruments such as tabla and tambura.

George also recorded the track The Inner Light at EMI Studios in Mumbai while one of his contributions to the Sgt Pepper album was Within You, Without You. John’s Across The Universe featured George on sitar and tambura. The Sanskrit phrase, ‘Jai guru deva, om’  features in the chorus, which roughly translates to ‘victory to God divine’.

The Beatles were to be inspired by Maharishi Mahesh Yogi and transcendental meditation and set off for the Maharishi’s ashram in Rishikesh, a journey which became one of their most fulfilling creative adventures during which they composed 32 songs.

Due to the large number of compositions written in India, they insisted their forthcoming album The Beatles (commonly known as the White album due to its stark cover), be a double LP. George commented, “All the experiences that happened in India were all embodied in that album. Most of those songs were written in Rishikesh like Julia and Blackbird and Dear Prudence.”

Not all the numbers composed during the group’s Asian sojourn were included on the album. Heather, for instance, a Paul McCartney song which Paul invited Donovan to play acoustic guitar on the demo disc, remains unreleased, while Child Of Nature, a song John wrote in India, underwent a change of lyrics some years later to become Jealous Guy.

The song Dear Prudence, penned by John, was inspired by actor Mia Farrow’s younger sister Prudence, who was also at the ashram. The girl seemed to spend all her time meditating, an intense young thing who ‘didn’t come out to play’. John was elected to persuade her to come out. And at one time, the Beatles gathered outside her window to sing On-La-Di On-La-Da.

Back in the USSR was a parody of the Beach Boys style, based on the Chuck Berry number Back In the USA and one of the many compositions Paul wrote in his India period. Mike Love of the Beach Boys was also at the ashram and it has been suggested that he helped Paul with some verses. Wild Honey Pie has its origins in a singalong which took place at Rishikesh, though Paul is the only member of the group featured on the number when it was recorded at Abbey Road studios.

Another of John’s songs composed in India is The Continuing Story of Bungalow Bill. He was to say, “This was written about a guy in Maharishi’s camp who took a short break to go shoot a few poor tigers, and then came back to commune with God. There was a character called Jungle Jim and I combined him with Buffalo Bill. It’s a sort of teenage social-comment song and a bit of a joke.”

The chap John referred to was a young American, Richard Cooke III, who came to Rishikesh to visit his mother, Nancy, who was at the ashram. Richard and his mother went hunting and Richard shot a tiger. Later, he felt remorse and met the Maharishi. John and Paul were also present.

John’s Cry Baby Cry has the influence of a nursery rhythm and that of Lewis Carroll, one of his favourite authors.

Paul said, “Mother Nature’s Son was inspired by a Maharishi lecture on man’s relationship with nature, but mostly written in Liverpool when we got back. The same lecture inspired John to write I’m Just A Child Of Nature.”

Though John was accompanied by his wife Cynthia at Rishikesh, he said he had Yoko Ono in mind when he wrote the number I’m So Tired. He commented, “I couldn’t sleep, I’m meditating all day and couldn’t sleep at night.”

Why Don’t We Do It In The Road was written by Paul after he saw two monkeys on the street. He said, “I was up on a roof meditating and I’d seen a troupe of monkeys. A male just hopped on the back of this female and gave her one, as they say in the vernacular. Within two or three seconds, he hopped off again and looked around as if to say, ‘It wasn’t me,’ and she looked around as if there’d been some mild disturbance… And I thought … that’s how simple the act of procreation is … We have horrendous problems with it, and yet animals don’t.” He is also said to have been inspired to write Blackbird while in India after a bird had woken him up at six in the morning.

Discussing Rocky Raccoon, Paul said, “I was sitting on the roof in India with a guitar—John and I were sitting ‘round playing guitar, and we were with Donovan. And we were just sitting around enjoying ourselves, and I started playing the chords of Rocky Raccoon, you know, just messing around. And, oh, originally it was Rocky Sassoon, and we just started making up the words, you know, the three of us—and started just to write them down. They came very quickly. And eventually I changed it from Sassoon to Raccoon, because it sounded more like a cowboy.”

When John was at Rishikesh, Donovan showed him a finger- picking method of playing the guitar that John used to compose Julia, a tribute to his late mother.  Donovan later said, “Learning a new style meant composing in a different way. In his deep meditation sessions, John opened up feelings for his mother. He found release for these emotions in Julia…”

Revolution, generally regarded as John’s first political song, was conceived in India, although there were different variations of the number. He was to recall, “I had been thinking about it up in the hills in India. I still had this ‘God will save us’ feeling about it, that it’s ‘going to be all right, going to be all right,’ but that’s why I did it, I wanted to talk, I wanted to say my piece about revolution.”

The idyll at Rishikesh came to an end when Alexis Mardas, a member of the Beatles party, suggested to the Beatles that their spiritual guru was carnally interested in several women at the ashram. Mardas may have had his own reasons for making the allegation, but the Beatles lost faith in their guru. As they were preparing to leave, John began to write a song about the Maharishi, pouring all his despair, a song called Maharishi What Have You Done, You Made A Fool Of Everyone. On returning to England he rewrote the number and after receiving legal advice, decided to call it Sexy Sadie.

The musicians and musical instruments of India had a noticeable effect on the Beatles and their India trip proved to be a creative catalyst. In fact, in the case of John Lennon, transcendental meditation helped him kick drugs and opened up his creative juices. So in some ways, The Beatles double album could be regarded as a hymn to India.

Bill Harry is the founder of Mersey Beats, the magazine that made the Beatles famous  and introduced the band to manager Brian Epstein. Harry has also authored The Ultimate Beatles Encyclopaedia