The story of an artist who has lived most of his life in deafness but still can’t afford to listen. 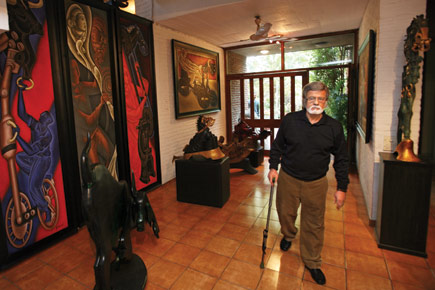 The story of an artist who has lived most of his life in deafness but still can’t afford to listen.


What I knew of sound from my childhood, I had forgotten a long time ago. I was eight years old when I fell into the Jhelum river and lost my sense of hearing. For most of two years, I remained confined to my bed, going through a series of surgeries. My frustration was immense. It felt like I was living in a bottle where you could see everything outside in motion, but not hear anything.

I could no longer play or communicate with children my age. My only means of communication was through writing, and I had been in school only four years. Besides, children my age couldn’t express themselves through writing. My father, however, helped grow my capacity in the Urdu language. He bought me books to read and to kill time. In those days, children’s literature in Urdu either didn’t exist or my father didn’t know of it. So I read books for people at least a decade older than myself.  Thus, he unwittingly carried me to youth without any real experience of childhood.

All this time, he worried endlessly about my education.  I was 13, still incapacitated, doodling to while away my time. In time, this very activity inspired my father to believe that an education was still possible, one that did not require me to hear. I shifted to Lahore—to join Mayo School of Art—alone and away from my family for the first time.

Somehow, I adjusted to this new world, communicating with whatever means possible. I had never learned the sign language taught to the hearing impaired; the signs I used were largely of my own making. When I look back, I wonder how it was that strangers soon picked up how to communicate with me. Nonetheless, this was Lahore, closer to home, where people spoke my language. The process of learning to live life on my own had only begun. For, when I graduated in graphic art, and decided that I wanted to be a painter instead, my father sent me to JJ School of Arts in Bombay. Before Independence, few lived in states other than the ones they were born in. I remember even in Jhelum, there was only one family from outside—from Jaipur. They lived a secluded life. No one entered their home. And they still spoke Hindustani, not Punjabi. In Bombay, I knew no one from my hometown in Punjab. And I was to spend my next three years here.

By that time, Partition happened. Things were getting difficult in Bombay and I had to return home. My family moved this side of Punjab, where I took a job in the government’s publicity department. It was then that I sat down to paint. Since I had seen so much anguish during the Partition, human misery became my first theme. But I still ask myself whether this was really because of the experience of the Partition or had life provided me with a theme to express my inner frustration and misery?

This frustration, of course, was considerably lessened after I married. My wife became the bridge between me and the world. She listened for me, and I interpreted.

Still, I longed to hear.

I would read about every advance made in the medical field related to deafness. That’s how I found out about the cochlear implant developed by Dr Gibson of Australia. In 1998, I contacted him. By then, I was almost 65.

Dr Gibson wasn’t very optimistic. He explained that hearing was only partly about catching sound. One has to then develop a memory for it. Just as the mind has the habit of forming memories, it also has the habit of forgetting. The longer the period of deafness, the less the likelihood of the implant’s success. This is why it is largely tried on children below six years of age, bringing back their hearing by almost 80 per cent. But I did not want to die knowing that there was a chance that I did not take. I insisted.

I didn’t know the difference between living in the hearing world and in silence before I experienced both. Now I believe in the wisdom of Dr Gibson’s words: the implants are best tried on children. I don’t mean to sound discouraging, but those with more than a decade of deafness need time and patience for this.

I wanted peace to live and paint.

Placing the implant was easy enough; I had to spend only one night in hospital. And thankfully, there was no pain from the operation. The first sound I asked to be identified was that of my wife. I wanted to know what she sounded like.  In fact, I remember, I’d asked her then how she felt now that I could hear again. And she said: “For me, you’ve never been deaf.” I cannot ever forget that.

I was excited about sensing something new, but really, the sounds sounded so strange at first. They were so mechanical. For the next six months, I was like a baby being taught to identify, to put names to sounds. I spent an hour every single day with a therapist. And I exercised three hours. And just like a baby, I would constantly ask my wife to identify the same sounds again and again. She did it for a time. Slowly, though, I learned to identify natural sounds like the chirping of birds, and to recognise footsteps. I began to distinguish between the door bell and the phone bell. My capacity to recognise natural sounds was almost complete. Not yet of human voices though. I still had much to learn.

Of course, this left me with no time to paint.

At another level, though, the sounds were even unbearable. Immediately after the implant, my sense of hearing was greater than normal. It’s like when one arrives in a new town—you hear many sounds. Over time, they become habitual, and one tends not to notice them. I would be sitting in my room inside the house, and hear with immense, intense, clarity sounds like car doors banging shut on the road outside. The only way to avoid the pain of these noises was to shut off the implant. In time, these were giving me headaches. I couldn’t think. And it was taking up so much of my time.

A time came when I asked myself whether I wanted to be a ‘hearing person’ or a painter. My friends were all painting. So I decided to get the implant removed.  My family worried about the outcome, but I stayed firm in my belief that I had to give up sound, even though every moment of my life I’d wanted to hear what was going on.

When I went to get it removed, I had been in the operation theatre for two hours, when the Turkish surgeon asked me whether he should replace the implant with a new one that supposedly made things easier. I was tired, I couldn’t think clearly, and so I agreed.  However, this experience was no different from the previous one. So, after two months, I got the second implant removed too.

I am now well adjusted to life without sound. This time, it is my own choice. So there is no frustration. What’s different is that now, my memory of sounds is fresh. Having heard again, my perception of things has changed. I feel more enthusiasm for life. My colour sense is more harmonised. Every artist chooses a different palette to carve a vocabulary. Some are loud, some are soft. You recognise it even if it is not physically present. I have realised that between black and white, there are many more shades. I am now 83, the memories of sounds still persist. Yet, I recognise that there is a world without sound which has its own virtues.

As told to Elizabeth Kuruvilla