At the banquet to celebrate their 50th anniversary, his tummy bursting with boar and ears straining to drown out Cacofonix, a fan tries to remember exactly why he loves these Gallic warriors. 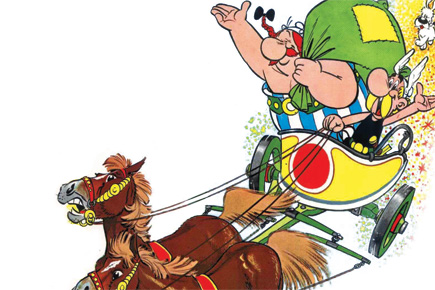 Asterix is 50. And the little star is not about to fade into hallowed history any time soon. Just not his style.

The first woman I ever loved was the voluptuous wife of Geriatrix, followed closely by Panacea. Like Obelix, the fact that Panacea was already engaged to Tragicomix (spelt with a T, as in ‘Timeo Danaos et dona Ferentes’) did little to dampen my passion.

In other words, it was the art that first attracted me to Asterix. I liked the way people flew into the air, leaving their sandals perfectly upright on the ground. I liked the fact that in this world, the full measure of a man was reflected in the size of his nose. I liked how despite all the improbably graphic violence, no one seemed to actually get hurt, let alone die. And then, there’s the magic potion. Who amongst us has not been in a situation when that wouldn’t have come in handy? Even vegetarians can benefit, because after all, the lobster is optional, and only added for the flavour.

Asterix is 50. He first appeared in Pilote, a French children’s magazine, on 29 October 1959. In initial sketches, Albert Uderzo had drawn Asterix as big and beefy, the way he thought a Gaulish warrior ought to look. But Rene Goscinny, the writer, was clear. He wanted someone small and clever. After all, Asterix literally means ‘little star’. So Uderzo, unable to get the beefiness entirely out of his system, suggested that Asterix have a big, dumb companion. And so, Obelix was born. Since then, over 325 million of the 33 Asterix books have been sold worldwide, in 107 languages, making Goscinny and Uderzo the most successful French authors ever. No doubt Alexandre Dumas and Jules Verne are clinking glasses and saluting Goscinny as we speak.

Apart from the magnificent women, what is it that makes Asterix so appealing? Uderzo confessed to being puzzled himself, and once said they were like “magicians who do not know how they do a trick”. For some, the fun is in all the historical and cultural references, which gives you the sneaky satisfaction of imagining that you’re the only one getting all the clever jokes. If you’re into statues, it’s fun to see Impedimenta as Delacroix’s Liberty Leading the People, Asterix as the Statue of Liberty, and a high priced slave impersonating, in rapid succession, The Thinker by Rodin, The Lakoon by Athanodoros and Polydoros, and The Discus Thrower by Myron. People have devoted years of their lives figuring out these things and you can see what they dug up at Alea Jacta Est or Asterix Annotations.

But it’s not really about classical allusions, or even the fact that people have names like Titus Crapulus and Gluteus Maximus, which is a large buttock muscle. It’s more about vital life lessons, like learning that it’s okay to say ‘Wkrstksft’ when you can’t think of anything else to say to a girl. Or that ‘Zigackly!’ is a wonderful way to demonstrate that you agree with someone, so long as you deliver the word with enough zest and panache.

You can also learn a surprising amount of history from Asterix. Their recreation of the ancient Olympic Games is extremely accurate, barring the declining and falling of all the participants (But then again, who knows?). Julius Caesar, who came from a genteel poor family, was born and raised on one of the upper floors of an insula exactly like the building described in Mansion of the Gods. He lived in the Subura, a rough part of Rome now populated by Bangladeshis.

In France, Asterix is like Michael Jackson and Mickey Mouse rolled into one. The first ever French satellite was named Asterix, so he really did manage to become a little star. The three live action films are the most successful film series in French history, despite cringingly over-the-top performances by Roberto Benigni. They are partially salvaged by the perfect casting of Gerard Depardieu as Obelix, who gamely soldiers through the shambles, and probably deserves the Nobel Prize a whole lot more than Obama ever will. Asterix’s 50th anniversary in Paris will be celebrated with appropriate pomp, and will include concerts, exhibitions and an acrobatic display by elite pilots of the French Air Force, thereby revealing to an astonished world that the French have an air force.

It’s strange to think that Goscinny passed away in 1977, over three decades ago, and it is entirely to Uderzo’s credit that he has kept Asterix going. In fact, Goscinny handed in the script of Asterix in Belgium just before he died, but Uderzo was too upset to illustrate it, or even look at it, until he was sued by the publishers and forced to finish it. Since then, he has soldiered on. A little bit of zing may have gone out of the stories, but the artwork is always a joy. And there are still enough clever references, I might add. In the latest, the character Akoataki is a little touch of the hat to Takao Aoki, the creator of Beyblade. Pretty hip for a 50-year-old.

Rather touchingly, Uderzo has continued to give Goscinny full credit at every opportunity, and even refers to him in the present tense in interviews. In 2007, at the grand age of 80, he told BBC, “I find it completely normal to have both names on the album. I would be ashamed to only put mine on, even if it was only me who wrote them. Goscinny will intrinsically be a part of them as long as Asterix lives.”

Goscinny’s children are part of Albert Rene, the company Uderzo founded in both their names, although recently he has taken flak for letting other authors write and draw Asterix. In the meantime, you can look forward to Asterix and Obelix’s Birthday: The Gold Book, published on 22 October, with the grand old man still in charge, and bits and pieces from Goscinny tucked away here and there.

What is it that makes so many of us love Asterix? Perhaps it’s the little things, like the Belgian in Asterix the Legionary who has hair exactly like Tintin. Or the Egyptian who joins the Roman Army thinking it’s a holiday camp. Or the shy barbarian looking for psychiatric help. In case you are reading this in a parental capacity, it’s important to point out the educational benefits as well. You can learn important things about different countries by reading Asterix. The fact that the Swiss are constantly cleaning everything, for example. Or that all Greeks are cousins. And that Corsicans are very, very, very slow.

Fifty years is just a number, not such a big deal. Spiderman may fade into history, and Hogwarts become a distant memory, but as long as people still look at words and pictures, somewhere out there, our friends will always be at their banquet, where the jokes are simple, the laughs are loud, and they never ever run out of wild boar.