A Paean to the Paan

My father’s affair with paan introduced me early to the delicate temptations of the green leaf. And left me a lifelong lover and connoisseur, unmindful of mild stains on my reputation 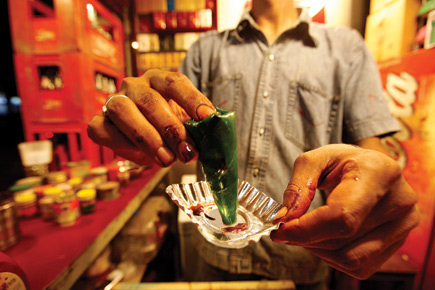 My father’s affair with paan introduced me early to its delicate temptations. And left me a lifelong lover, unmindful of mild stains on my reputation


Father loved his paan so much that at times Mother teased him that he loved the leaf more than he loved her. He would just smile and wink at us children and put another gilori (triangle of prepared paan) of his beloved magahi, plucked out of a silver pandibiya (paan box) in his mouth. He would never let any other variety ruin his delicate palate. Mother was not the only one who thought he carried this fuss too far. Didn’t other paan leaves have seductions of their own—the meetha patta, saunfia, kalkatia, kapoori, saanchi, jagannathi and mahoba?

Nothing could persuade Father to change his ways. He made do with magahi (a betel leaf from Magadh, Bihar) that he received via VPP in that pre-courier era from his trusted supplier, Chaurasiaji in Banaras. The kattha (brown paste applied to the leaf) he used was just the cream at the top, and he slaked chuna not in water, but in milk. The supari (betel nut) had to be dakhani—cooked in kattha and bone-hard. Not addicted to tobacco, he relished a few grains of muski daana produced by M/S Ittada Khan, Muttada Khan—perfumers from Kannoj. These were seeds of green cardamom dipped in tobacco water, then draped in chandi ka varq (silver foil) and then aromatised with a few strands of saffron. The name suggests the presence of a trace of aphrodisiac musk as well. The miniature bottles the stuff came in even looked like ittar (perfume) containers.

All this knowledge came much later. What mattered in the years before one’s loss of innocence was to ensure that one was rewarded with a grain of the forbidden delight after a long spell of tedious good conduct. Mother, of course, didn’t approve.

This was the beginning of my unending affair with this leaf of myriad delights; little did one know that paan is not native to this land and was imported from south-east Asia and called naag vallari, literally the ‘snake vine’. The name is an apt one, as the creeper does resemble the hood of a cobra.

As one grew up, what shocked was the discovery that not everyone was as fastidious when it came to chewing paan. Most people were content to be given a choice of tambaku wala (with tobacco), meetha (sweet) or saada (plain). Not many specified a leaf, and only a few bothered about the state of the supari.

Ironically, the contemporary supari has a very different connotation. It is given to a contract killer to seal a deal. Its origin can be traced back to the age of chivalry in medieval India when the sovereign dared the bravest of the brave to volunteer to undertake  a suicide mission. A platter full of paan ki gilori, also known as beerha, was passed around, and whoever picked one up first was assigned the self-sacrificial   task. How the mighty have fallen!

There are many other phrases in Hindi that are vitalised by terminology of paan culture. Chuna lagana means taking somebody for a ride. In government offices, bribe seekers often use the euphemistic “Kuchh paan supari ya chai-paani ka bandobast toh kardijiye.” (Won’t you arrange for some paan or tea and the like?).

No one remembers today that the paan is not a son of the soil of India. It has become such an indispensable part of our lives. It cuts across caste and creed, and tries bravely to bridge the class divide. At the panwari’s (paan seller) shop, all are treated alike—prince or pauper. You have to stand in queue for your daily fix.

Come to think of it, access to the panwari’s shop itself used to be an important rite of passage in small towns. The young adult announced his maturity as much with the sprouting moustache and downy beard as with the buying of paan. Entry to this club was strictly for males. The paan shop provided a unique public space: here, one could exchange gossip, make new friends or meet old ones.

The paan came in handy to mask the smell of alcohol or cigarettes on your breath; both were considered more sinful vices. Nevertheless, there were elders who did not approve of paan. They nodded their heads and muttered, “What begins with paan will surely end with a mujra (performance) at a kotha (brothel). And how will the money come to indulge in such expensive pursuits? The youngster will have to take to theft.”

There were folk songs loaded with double entendres that regaled family and friends on festive occasions like marriages and Holi—Sarota kahan bhool aai paaye nandoia. The sarota is a nut cracker kind of device to split supari. There was also the legendary palang todh paan (literally, the bed-breaking kind). Much before Viagra had appeared on the scene, this heady admixture loaded with sundry ingredients came with the guarantee of enhanced performance in the bedroom. Prepared on special order, it was sold strictly to adults at a premium. Alas, before one could try and test it, the species had gone extinct.

Paan has long been considered a perfect medium for the delivery of tonics, medicinal or poisonous. A paan with mulaithi (the stem of a tree with medicinal properties) serves as a prescription for a sore throat. Some bitter medicines also use the paan route. Legend has it that the teenage singing wonderkind Master Madan was slow poisoned  by mercury packed in a paan ki gilori. Tales abound about poor promising fellows who lost their mental balance after imbibing dhatura (an intoxicant) in paan.

In the Northeast, supari is called tambol and eaten wrapped in a plain paan leaf, leading to mild intoxication. Deep down south, the veeda is a no-frills offering that has rose-tinted and rose-flavoured chunam (lime), and grated nariyal (coconut), with a clove sealing the small packet.

On the big screen, Amitabh Bachchan has single-handedly tried to entice India’s film-going youth to the enchantment of paan. When he sings, Khaike paan Banaras wala/khul jaye band akal ka taala, one is almost convinced of paan as an idela brain tonic. One wishes that he had not broken into song-and-dance, though, scarring us with innuendos of cuckoldry—longa ilayachi ka beera banaya khai gori ka yaar balam tarse! Amitabh could get away with spitting out the residue with a loud phicch; lesser mortals have to be much more careful with the divine cud in their mouth.

More than four decades have passed since Waheeda Rehman danced that wonderful number in the film Teesri Kasam: Paan khai saiyyan hamaro/Saavli suratiye hoth lal lal. One of the hazards of chewing paan is the peik (red juice) that seems to take on a life of its own, eager to spout like a fountain to stain anything in sight and range. Father’s friend Leeladhar Babu had appropriated mastery in this vulgar pastime. He loved paan, but could never control his peik expulsion—it drooled all over his clothes, always missed the spittoon, and struck terror in our hearts. But we digress.

My obsession with paan has raged unabated for over half a century, and after all this manic research, I feel only the surface has been scratched. The paan motif in textiles and jewellery takes us to a different universe altogether. What is called the ‘suite of hearts’ in the realm of playing cards is ‘paan’ in Hindi. Nor should we ever forget the accessories that were an inseparable part of the paan lover’s baggage, such as the exquisitely-decorated paandaan (a box full of ingredients that go into paan) and the batuwa (a dainty little purse made of silk or velvet with tiny drawstrings adorned with colourful bon-bons). Bhopal was once famous for these. Bidar, near Hyderabad, was equally renowned for ornate peikdaans in Bidriware. There is no dearth of living legends in our musical pantheon who have recounted the early days of their apprenticeship with their masters spent cleaning the ustad or guru’s peekdaan. The mentor usually used this test not to humiliate a promising student, but to test endurance and seriousness of purpose.

What calls for lament is the untimely demise of the noble leaf caused by the proliferation of paan masalas under various brands. What remains are fragile memories of the leaf of myriad delights.

Pushpesh Pant is a professor of diplomatic studies at Jawaharlal Nehru University. His book, Paan: The Leaf of Myriad Delights, is due later this year