The Masters of the Universe

Using scale and a digital ecosystem, Mukesh Ambani joins a club of corporate icons who are defining the future 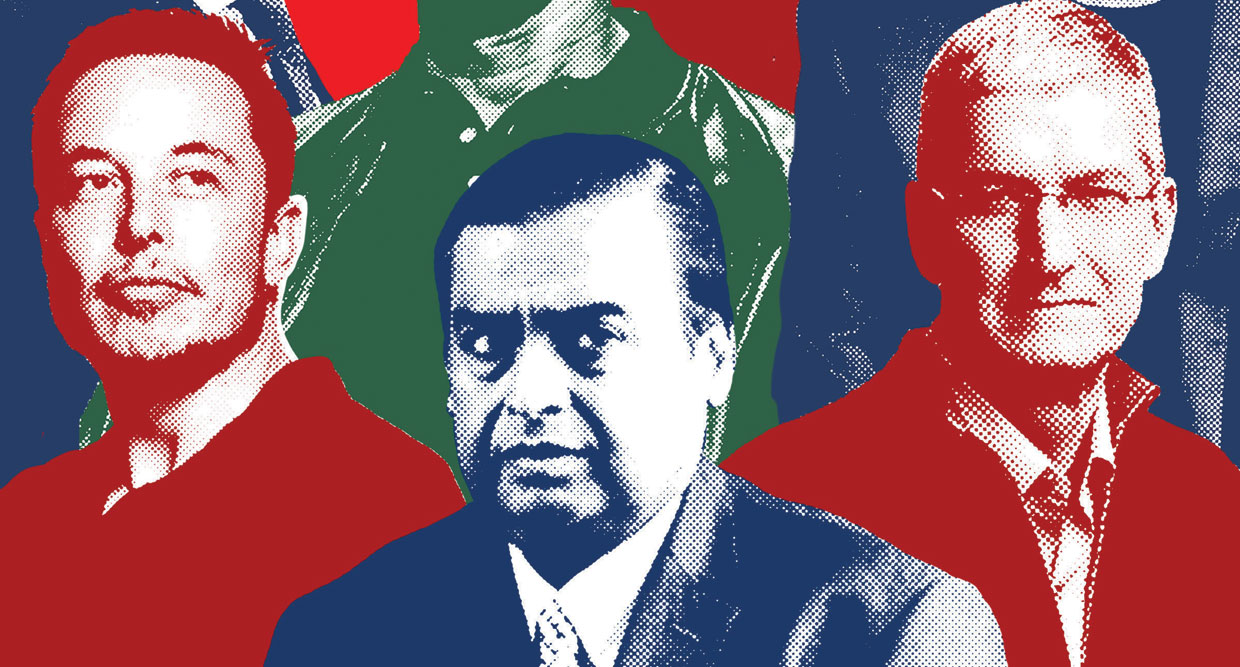 
Just last week humankind probably took its first baby step towards immortality. Elon Musk, the founder of firms such as Tesla, SpaceX and Boring Company, gave a presentation to the world about what another one of his ventures, Neuralink, had been up to. It was known that Neuralink aspired to implant chips into the brain that would progressively fuse it with Artificial Intelligence, which would ultimately bring benefits that are not short of miraculous. Memories, at some point, as the technology progressed, could be downloaded and stored. Happiness could be modulated, depression a thing of the past. Areas that the brain had lost contact with could be connected again. You could perhaps turn your television on by thought. Who knows, in a distant future, consciousness itself could be separated from the body and that would make man get out of the confines of the body and live forever. Neuralink does not spell it all quite like that. For the moment, they are content with it being a medical device helping people with brain-related disability navigate life better. In the presentation, Musk showed pigs implanted with chips in their brains and how neural activity could be tracked depending on what the pigs were doing. Human trials were going to begin soon.

One of Musk’s companies makes electric and battery-operated cars, another makes spaceships, a third is about boring tunnels through which ultra-high speed transport will be possible. Even though they all seem unrelated, including Neuralink, there is a larger end at play here. That is the ecosystem being created to achieve Musk’s ultimate ambition: to establish a colony on Mars. That will need expanding the limitations of time and space because Mars is far away and that might not even be the last stop for Musk. But these things require a lot of money and he is therefore along the way establishing a chain of companies at the cutting edge of technology and also servicingthe needs of people. The technology of SpaceX supplements Tesla and vice versa, for example. Musk’s companies, if they can manage his overarching ambition and insatiable demands of capital, are as future-proof as any can get. In the world today, there are just a few such people planning to own and define the future. Amazon’s Jeff Bezos is another. There is Facebook’s Mark Zuckerberg. And even though Larry Page and Sergey Brin are not as identified with the micromanagement as the others, Google is another behemoth. There is also Apple, now without Steve Jobs but still riding on his genius to become just recently the first company to attain a market capitalisation of $ 2 trillion. China has its own avatars. You could find a scattering across the rest of the world. All have one thing in common: they might have started out with one big idea but, using it, went on to ringfence a percentage of the population, thus creating a captive bank for a variety of services and products. It is into this select group that Mukesh Ambani is slowly entering.


Mukesh Ambani is different from his global rivals in his roots and background being from a non-digital era and business. But two things going for him are cashflow from the parent company that allowed him to take the gamble and his understanding of and control over the Indian business environment. While domestic competitors didn’t have his resources, for foreign companies, India is just one important market among many

You only have to imagine what Jio was considered in the public imagination before it launched—as just another telecom company. Everyone thought they would have one more service provider for their phone. And after its launch even though it disrupted the telecom market by absurdly cheap offerings, no one still thought it extending any substantial distance into other territories. We know differently now. Telecom was the highway through which Jio could get access to 40 crore Indians and counting. And from then on, anything was possible because this was a locked-in market. In one form or another, they provide news, movies, music, shopping, health services, gaming, video conferencing, grocery delivery and more.The tip of the iceberg is only now starting to rise up. Consider the recent takeover of Future Group’s retail by Reliance for Rs 25,000 crore. It will be a business running in sync with the larger umbrella of the platform. In an era before the smartphone, at the most they could make the phone useful was by sending SMSes. Now, Jio is more than a SIM card; it is an ecosystem that has the potential to be limitless in what it offers. And it needs to be limitless to survive.

Imagine the companies (as of now) you can be certain will be around in future and the same names will come up. Most people in the US cannot imagine a world in which Apple is not feeding them the phones and apps that sustain their lives. The Android operating system, a Google product, is ubiquitous in the lives of phone users in other parts of the world. Google has a phone too but that is expendable; it is the Android operating system through which it gets its captive audience. And Gmail, the email service that displaced Hotmail within a blink and entrenched itself. Or in India, take Facebook, which has created an umbrella of social media services that few can wriggle out of. If you are somewhat older, all your friends and family are on Facebook. If you are young, Instagram, owned by Facebook, is a must. And all of them are also on WhatsApp, completing the fence. Social media is how Facebook has got its billions of users hugging to itself. Or Amazon, which is uniting all the shoppers of the world and knows their preferences inside out. They can even tap user data to anticipate what someone might need even before that person knows it and target products accordingly. Once you are certain of access to hostage consumers and keep satisfying them cheaply using economies of scale, then it is a moat that makes it nearly impossible for a competitor to enter the space. The capital required for such a breach will deter most of them. It is tough to create the ecosystem but once it comes into play, as with the Big Tech companies, then their competitors can only be the ‘others’ in that club.

As an illustration, take what everyone recognises as the future of transport: the driverless car. Google, which was first an email service; Facebook, which connected friend and family through a website; Apple, which made computers; Amazon, which was an online bookstore once—they are all vying for the driverless-car business. They are stepping into the territory of Elon Musk’s Tesla which is far ahead in the race when it comes to technology. And all of them are going to be directly in competition with brick-and-mortar automobile companies that have been around for over a 100 years. It is almost impossible for Mercedes to start making phones that outsell Apple, but Apple would not find it as difficult to get into the car business when a new technology can change the entire dynamics of the sector. These are the leaps that can be made because of scale and ecosystems. It is why Ambani realised that if Reliance had to step into the future then there was no other way. Petrochemicals could keep funneling money but with every passing year the world was changing irrevocably. Without an ecosystem of his own, Ambani would have no future.

Facebook is now an investor in Jio Platforms, which suggests that it has realised partnering is more rewarding than competing with Ambani. Likewise, Google too came to a similar conclusion. India is such a huge market that it is enough to slake the thirst of Ambani’s ambitions for some time. The more products and services he adds within his ecosystem, the greater the distance between him and the rest

Ambani is in some ways different from other members of this club in his roots and background being from a non-digital era and business. But two things going for him are cashflow from the parent company that allowed him to take the gamble and his understanding of and control over the Indian business environment. Domestic competitors didn’t have access to the resources needed to compete.For foreign companies with more resources than him, India is an important market but it is only one among many. And, being outsiders they would find navigating Indian hurdles difficult, as Facebook experienced when they came out with their Free Basics internet access that would give them access to a huge swathe of the population but were stymied by an online campiagn. Facebook is now an investor in Jio Platforms, which suggests that it has realised partnering is more rewarding than competing with Ambani. Likewise, Google too came to a similar conclusion.

India is such a huge market that it is enough to slake the thirst of Ambani’s ambitions for some time.The more products and services he adds within his ecosystem, the greater the distance between him and the rest. He has just taken over Future Group’s retail, thus running against Amazon, which is 10 times Reliance’s size with a reputation for winning against competitors. But in India, it is a battle Ambani should feel confident to get into. When his plans extend beyond India, it might be a different story of competition but, for the moment, he remains India’s only answer to the rapid advance of Big Tech companies.