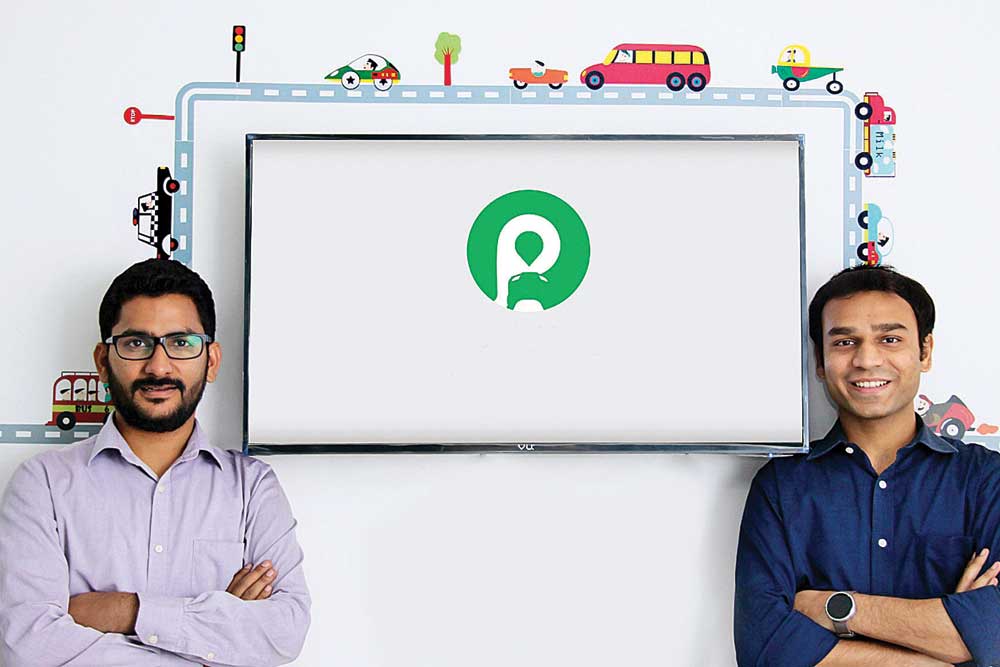 As I enter a spartan second-floor apartment in Delhi’s Said-ul-Ajaib, I notice a mid-size TV screen up on the right wall. All it displays is the time and a five-digit number going up by the second. I can’t figure out what ‘23,886’ refers to. I look to my left and see four men—dressed like college-goers in jeans, untucked half shirts and T-shirts, capri pants, sneakers and sandals—working on their laptops on an ordinary- looking table. I am here to meet one of the two founders of Get My Parking, an app.

“Is Rasik around?” I go up to the table and ask one of the four. “Hi,” he replies and shakes my hand. Over the next couple of hours, Rasik Pansare tells me the story behind the increasing number on that screen.

Said-ul-Ajaib is a typical urban village with congested lanes and cheek-by-jowl houses. Low rents, due to unchecked construction and lack of public amenities, attract thrifty entrepreneurs to set up office here. These include designers, artists and restaurateurs. It is an unusual choice for an infotech company. Comfortably funded now—till April 2018, it had raised $4.5 million, according to VCCircle—Get My Parking moved in here two years ago at Rs 50,000 a month as rent and is now paying Rs 70,000. But even this was unimaginable for Rasik Pansare and Chirag Jain when they started out three years ago from a friend’s uncle’s apartment in Noida.

Jain, in the US right now to work out the company’s expansion plans there, first met Pansare on a 15-day-long train journey in 2014-15. Between December 24th and January 5th every year since 2008, Jagriti Sewa Sansthan, a UP-based skill-development NGO, hires a train and takes a little over 400 men and women (selected through a competition) on an 8,000-km ride, beginning and ending in Mumbai, to various Indian towns and villages. Those aboard are encouraged to think about solving India’s development problems through entrepreneurship. As it says on its website, Jagriti targets those who are ‘literate, [have a] roof over head, [get] 3 meals a day, but [are] without [a] sense of purpose’.

Neither Pansare, 27, nor Jain, 29, meets this description. Growing up on Lamington Road, the electronic hub of Mumbai, Pansare saw his father struggle to build a small construction company in Nashik “from scratch… without any backing”. When his father died a few years ago, the family sold off the business, and his “housewife” mother studied for a professional degree and took up a job. Chirag, Pansare says, grew up in Dhanbad in “a typical Jain family where they discuss business on the breakfast table”. His family had a mining- equipment business, dependent largely on government contracts. Both have MBA degrees: Pansare from Faculty of Management Studies (FMS), Delhi, and Jain from IIT Madras. And both knew what they wanted to do with their lives.

“We both knew we’ll do a startup,” Rasik says almost clairvoyantly. “I knew from my childhood that I’ll do something of my own. I always had that aspiration to create things. I knew I will end up creating a company or product or something. I was pretty sure… We were never rich. I never had enough money or savings to start a company. That’s why my plans were, after FMS, to do a job for a couple of years, save money and then launch a startup. But I didn’t have to do that.”

Just after his MBA, with an offer from Pepsi in hand after he had impressed then CEO Indra Nooyi and other global board members in an international competition called ‘Become Indra’s Advisor’ in New York, Pansare met Jain on a train. Like a typical Hindi film script, their meeting has a flashback. While working at Carwale.com, as Jain began understanding the automobile sector, he got interested in the parking market. He scouted around developed markets in Asia such as South Korea and realised that parking wasn’t a problem unique to India. And though parking companies existed around the world, they were solving problems locally. San Francisco had its own model, London another and Seoul yet another. Without giving it further thought, he bought the internet domain ‘Get My Parking’ in the middle of 2014. But the idea had to wait another six months to take off. When they met in December 2014, Pansare remembers, Jain told him, “Chalo parking karte hain.”

Our pilot revealed the parking problem is one of supply, not demand. The supplier app is more important than the consumer app, says Rasik Pansare

Three-four months later, they conducted a pilot exercise at a mall in Noida. It was extremely successful—the contractor called their software “magic” and helped spread the word around, saving them effort and money on publicity. The big lesson they learnt was that the problem that had to be addressed was one of supply, not demand. “The supplier app was more important than the consumer app,” Pansare says.

Parking contractors have little control beyond manual monitoring and ticketing, and are clueless about traffic behaviour, which results in revenue leakage. What reaches the contractor at the end of the day is seldom equal to what is collected at the parking lot. The prototype they tested at the Noida mall helped them identify peak business hours (mostly when Salman Khan’s films were showing), digitise vehicle entries, exits and payments (replacing cash); and assure the contractor an actual picture of the lot’s daily intake. Six months later, they had secured $375,000 in funding from The Chennai Angels. By February 2016, they were managing 100 parking lots in Delhi. That year, they got one of their biggest endorsements from Prime Minister Narendra Modi after they helped manage Ujjain’s parking during the Kumbh Mela. Despite this, Pansare says, convincing contractors to pay a user fee for the software is difficult. To show why the sum they pay will help them save more than they spend, Get My Parking offers them a 15-day free trial.

On average, parking problems account for 30 per cent of all traffic jams, revealed a 2011 IBM Global Parking Survey in 20 cities on six continents. While Bengaluru reported the highest number of tickets for illegal parking among the 20, Delhi was among the cities where drivers argued the most over parking. It takes 20-25 minutes to park in the central area of a metro, found the survey, worsening congestion and emissions. Get My Parking aims to relieve both, with each partner playing a different role. “We are very different people, which is why it’s possible to work,” says Pansare, “I’m the marketing guy. He’s the product guy. I’m a long- term person, he’s short-term. We knew we were not perfect when we started, neither would we ever be.”

The Kumbh Mela was also a revelation, as they realised that what works for parking works for the administration of a city as well. Smart Cities is their mission now, keeping which in mind they created an Internet of Things (IoT) platform in 2017 that integrates the digital parking ecosystem of different ticketing devices, dashboards for monitoring and analytics, and payment systems. They have made their platform modular—“like Lego bricks”, as Pansare puts it—letting each contractor adjust it to his device’s configuration. And it is here that they face their biggest challenge. The system of local tenders for most contracts, they say, remains loaded against startups.

“Startup India has brought a lot of attention and buzz, but on the ground not a lot has changed. Under Startup India, there is relaxation only for Central ministries and PSUs, not state governments, not Smart Cities. But where does most implementation happen in India? At the local level. We are registered with the Ministry of Commerce but still don’t get tenders because the departments which bring these out are not under the Startup India ambit. That’s one problem,” Pansare complains. “The second is awareness. Government bureaucracy is not aware of such schemes. They know something like Startup India was launched by the Prime Minister, but not what’s inside it. Many a time my team members go in pre-bid meetings after a tender [Request for Proposal] is already out to tell them ‘Sir, as per law, you are supposed to give us exemptions.’ Their reply: ‘Oh, we were not aware.’ These are IAS officers, officials with Central Government authorities, not state. The third problem is that in many cases, the Government says, ‘We will not work with startups directly but will allow them to work in a consortium with bigger companies.’ What that does is that these big companies are able to bully small startups like us. Because they know even if it is our technology, it will never be used unless we go with the biggies. These giants understand they can force us to reduce prices or margins or even take a loss. There is no fair play, no market mechanism because they have high bargaining power. They are favoured by current regulations. We have no other option.”

The data Get My Parking has on parking behaviour and traffic can be put to use only once they have the attention of local authorities. The business environment is friendlier abroad, where governments invite startups to work with local bodies, says Pansare. In May 2018, attracted by Get My Parking’s IoT platform, Apcoa, one of Europe’s biggest parking management companies with 1.4 million parking spaces in 9,500 cities across 13 countries and revenues of €1 billion in 2014, asked the firm to help streamline its business. As Apcoa takes care of regulatory issues, Jain and Pansare can focus on operational aspects. They now have a staff of 82 working at three offices in Delhi (where Pansare takes care of marketing and local business development), Bengaluru (where Jain oversees the international foray) and Stuttgart, Germany (for the European expansion) with contracts in 17 countries. To expand in South India, the company acquired Bengaluru’s Constapark, which parks 4,000 vehicles daily, in April 2018.