‘There are segments that need government support. That is the philosophy behind the Budget,’ says Arun Jaitley 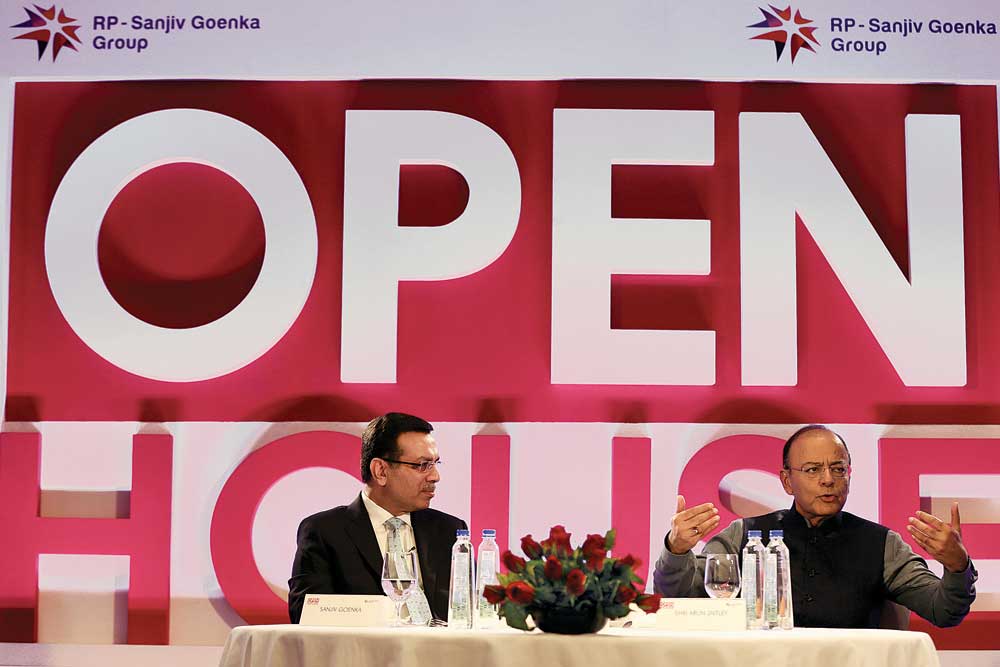 AT THE SECOND Open House with Union Finance Minister Arun Jaitley, his first post-Budget interaction with the Indian industry—held on February 2nd at The Oberoi in Delhi and attended by business heavyweights besides a few of his Cabinet colleagues—the lawyer-politician gave no space for the country’s liberal fraternity to denounce his proposals with shibboleths such as ‘The rich get richer and the poor poorer’. Jaitley took the wind out of their sails with an articulate enunciation of the Government’s inclusive yet pragmatic policies. Nibbling on slices of fruit and other health snacks on his table, Jaitley played with finesse the role he is so widely admired for: an advocate par excellence of the Narendra Modi-led National Democratic Alliance’s path forward. He did this in his inimitable style, his effectiveness enhanced by his intimate understanding of the fine balancing act that drafting a budget for such a complex country is.

At the outset, Jaitley thanked Sanjiv Goenka, chairman, RP-Sanjiv Goenka Group, the parent company of Open, which organised the event, for offering such a platform to ensure “greater interaction” with business leaders and opinion makers to discuss the Budget. The hall was well aware of its significance, this being the Finance Minister’s last full Budget before the General Election of 2019. Jaitley proceeded to outline the philosophy behind the exercise, saying that top policymakers of the NDA had decided to focus on parts of the economy that needed government support for sustenance. This, he said, explained the departure from his earlier Budgets. The Government did not want to fall for the usual temptation that all segments needed equal attention. Since there are those that will do well regardless of Central support, or may even thrive in the absence of government intervention, fiscal attention was best devoted to those who needed help to improve their lot and thus contribute to the economy of a 1.3-billion strong country. The rural sector, in particular, was in need not just of a push but a shove to overcome a crisis and keep up with the rest of India. Much had been achieved, he said, pointing to the dramatic success of several schemes of the Government—road connectivity to the country’s interiors, for example, done with the help of state governments, as also the huge strides made in sanitation programmes. The new measures, he said, are designed to boost farmer incomes and welfare vastly in accordance with the current imperative. “Our philosophy was to lend support to sectors where support was required,” Jaitley said, emphasising the role that governance had to play in ensuring social justice even as the country emerged as an economic powerhouse. This call for fair play won the Minister plaudits around the hall, as evident in the comments voiced by various attendees.

In the weeks preceding the Union Budget for 2018-19, there had been intense speculation about ‘populist’ proposals in the works. Historically, the last full budget of an incumbent government in India has involved a spending spree, with sops dished out to all constituencies from farmers and labourers to middle-class tax payers and others. The resulting hole in the finances is left for the next government to worry about. Those who were expecting such a budget were disappointed by Jaitley, who resisted wanton profligacy for the sake of future stability. The fiscal slippage for 2017-18 was restricted to 0.3 per cent of GDP; while last year’s budget had aimed for 3.2 per cent, the actual figure reported on February 1st is 3.5 per cent. For 2018-19, the target is 3.3 per cent. The ‘glide path’ towards prudent expenditure has been recalibrated, not brushed aside.

“We need to concentrate on rural India. If you look at rural India over the last seven to eight years, you can see there are distress” – Arun Jaitley

At the same time, the Government went in for interventions in key sectors of the economy, especially agriculture. On the rationale for this, Jaitley said, “We need to concentrate on rural India.

If you look at rural India over the last seven to eight years, you can see there is distress.” In his Budget speech, the Finance Minister had put the total rural livelihood development and infrastructure outlay for next year at Rs14.3 lakh crore, a large proportion of the total expenditure figure, which is pegged at Rs 24.4 lakh crore. This highlights the attention bestowed on rural India.

Much of it has to do with the unrest visible in parts of India on account of rural distress. One major measure is an assurance that the Minimum Support Prices (MSPs) for crops would be raised. In his speech, Jaitley had said that for most rabi crops, these would be pushed up to one-and-a-half times the cost of production. The expense involved had caused some concern among analysts. “It was a difficult choice to make,” said Jaitley at the Open House, “An analyst could say this will have effects on the cost of food and fiscal concerns. But the distress in the agriculture sector is very high and there is an aspiration in the farming community for implementing the recommendations of the MS Swaminathan Committee. The exact details will be worked out between the Niti Aayog, the Agriculture Ministry and state governments.” The broad idea, he added, was to ensure that farmers got their fair share of compensation. “Now what agency will handle the role of filling the shortfall or gap between the MSP and the market price received by the farmer is a matter of discussion and coordination between state governments and the Niti Aayog,” he said.

In a country attuned to a ‘socialist’ way of thinking for so long, budgets are often viewed as a zero-sum game: a gain for one segment of society is seen as a loss for others. The Budget for 2018-19 was not spared either. Within hours of Jaitley’s speech, there were murmurs of middle-class resentment, plenty of it to do with Income Tax slabs and rates. Many had expected ‘relief’. This would have been a populist giveaway, however. “India has a serious challenge on the tax compliance front,” explained the Finance Minister, “It also faces a challenge in raising taxes. In my previous budgets, I have consistently given relief to small taxpayers over this time. I am actually surprised at the inadequate amount of information behind such questions. Do I reduce the size of the Army because I cannot afford it? Do I stop building hospitals? Reducing tax rates does not help.”

In business circles, an expectation from the Government was a lowering of the Corporate Tax rate to 25 per cent for all companies (done only for those with annual turnovers upto Rs 250 crore), which could encourage investment by companies and thus generate jobs. Here again, fiscal restraints have come in the way, though it is being done in steps. “I had mooted the idea that the Corporate Tax rate should be 25 per cent,” said Jaitley, “The idea was that Indian businesses must have an investible surplus to create jobs. I had put a caveat that this should go along with the removal of exemptions. This is difficult [to do], as many businesses have been set up with exemptions in mind. [Across- the-board rate lowering] will happen when the sunset clauses kick in for these exemptions.” The Finance Minister pointed to the fact Small and Medium Sized enterprises had already been granted the benefit. “There are 7,000 companies that fall in the 25 per cent rate of taxation [slab], but by using exemptions they end up paying [an effective rate] of 22 per cent,” he said.

In this context, Jaitley was asked about subsidies and tax breaks. His response highlighted the Government’s approach: “To give a small subsidy to a small section and have ramshackle infrastructure does no service to the country. The goods and services tax (GST) has helped industry and has given relief to it. In addition, standard deduction has been given to salaried people. The three areas where I gave relief were based on their economic rationale and not some political calculation.”

On the whole, Jaitley expressed confidence in the Indian economy. He said that India was past its high-inflation era and the price-rise target of 4 per cent set by the Government and central bank was achievable. Higher prices of oil and vegetables, apart from increased housing allowances handed out by the Seventh Pay Commission, had posed some problems in keeping inflation under control, but price levels in general could no longer break loose.

Given the extremely competitive nature of Indian politics, it is hard for a government to resist populism as elections approach. The only limits on this tendency are the caps imposed by government revenues. Even that does not deter some regimes as they go on a borrowing binge to spend more. The restraint demonstrated by the Finance Minister is therefore all the more remarkable. The emphasis on trying to reduce rural distress and allocating more money to that sector is best described as pragmatic. After all, India still lives largely in its villages.