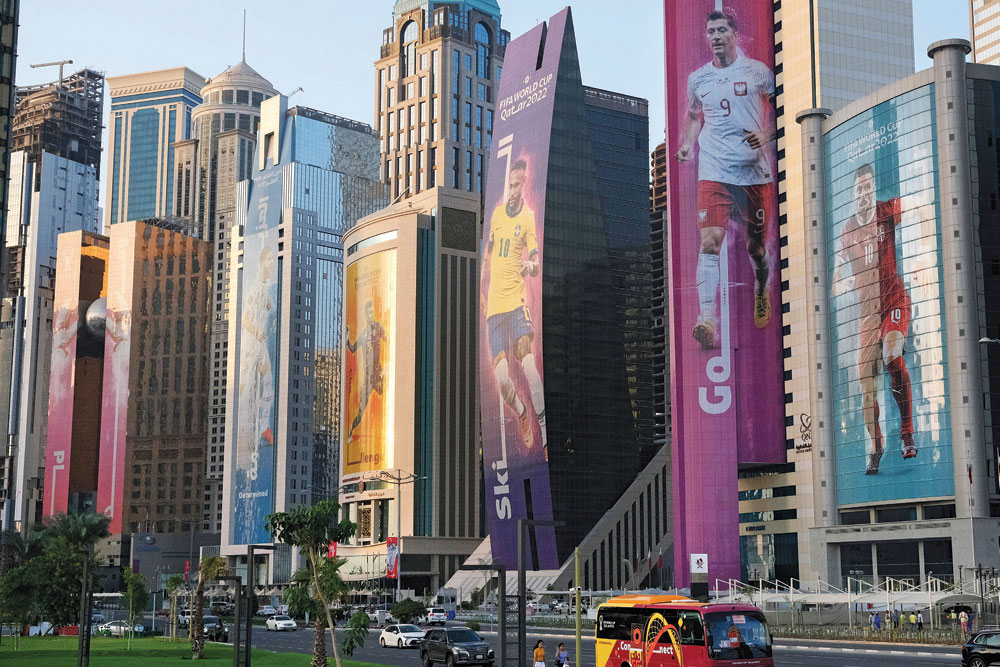 Downtown Doha decked up for the World Cup (Photo: AP)


QATAR HAS BEEN AT THE RECEIVING END OF global criticism for months. Its stand on homosexu­ality, its attitude towards labour, and its treatment of construction workers are the subject of human rights talk the world over. Football legends like Gary Lineker, for example, have openly stated the unease they felt about attending the FIFA World Cup draw. And yet, the World Cup is now upon us. The question is: Can Qatar stage the world’s greatest sport spectacle without a hitch, or will things go south with all the critical voices gathering steam as the inaugural day approaches?

Protests and critical commentary around global sports events isn’t something new. Rather, this is the norm where people use the event as an opportunity to voice concerns and draw global attention. Take the case of the Beijing Olympics of 2008. The Tibet issue had taken centrestage for a while and global attention was focused on China. More recently, the Russia football World Cup of 2018 was a subject of intense political debate in the UK.

The 2018 World Cup was being held in Russia and not Mar­seille. Yet every second newspaper piece in England started with the attack on English fans by the Russian Ultras in Marseille dur­ing Euro 2016. The overwhelming sense was that Russia was a disaster waiting to happen and it was better to escape than try­ing to embrace it. Minority voices like that of Gary Lineker got drowned in the deluge of anxiety and as a result of this media schizophrenia the English Football Association (FA) wasn’t able to sell its quota of tickets for any of the England matches except the one against Belgium.

The rhetoric about Russian under-preparedness wasn’t limited to England. Rather, it was widespread across West Europe where the reality of systematic doping in Russia, which saw Russian athletes miss the 2016 Rio Olympics, had grabbed all attention.

What is interesting in this discourse of ‘castigation’ is that it is deep-rooted and all-pervasive. Any country, except a West Europe­an one and the US, cannot host a mega-event on this size and scale.

The story was the same before South Africa 2010 and Brazil 2014 or the 2016 Rio Olympics. If Africa was a story of under-pre­paredness and window-dressing, Brazil and Rio were all about trying to mask the real issues from FIFA and the IOC party that had descended on town. The favelas were the real story and not the sport. In Russia, the concerns remained the same while the is­sues were somewhat different. Despite FIFA’s assurance that dope samples would be immediately whisked out of Russia to a testing laboratory in Switzerland, the Sochi 2014 Winter Olympics, the last mega-event hosted in Russia, was the talking point for having stimulated the menace of organised doping.

Speaking to Western commentators, the sense one gets is that World Cup 2022 ought to have been staged in the US or Japan. In an act, the ethicality of which is still debated, FIFA decided to go to Qatar and is now left with no alternative but to embrace that decision. Forgotten is the fact that just a year before the London Olympics in 2012, central London was subject to intense riots for days. So much so, that the Indian cricket tour of England in 2011 was about to be suspended. Racist chants at Premier League matches are no fanciful occurrences either and issues of contested identity with legends like Mo Farah and Nicola Adams continue to dominate scholarly discourse.


Just as London 2012, the last major sporting event hosted by England, and the Glasgow 2014 Commonwealth Games, the last mega spectacle hosted by the UK, were eventual success stories, Qatar 2022 can be the same. I still remember white-collar Brits celebrating Farah in London’s Hyde Park as the Somali refugee was creating history at the Olympic Park in Stratford. Farah, for the record, had been given the chance to do so with the Olympics coming to London. London, too, was given an opportunity by the IOC to showcase its multinational self to the world. Interestingly, the wider sporting world did not complain. Rather, teething prob­lems during the flame relay were treated as isolated issues and it was widely argued that the possibility of a transport meltdown was not a London-specific matter.

Such patience, however, is missing when it comes to the wider sporting world. Except the US, which has its own issues with rac­ism, no other sport destination, if Western commentators have their say, is safe.

It is time to stay patient. Give an opportunity to Qatar and be more open and flexible.

While critical commentary domi­nates the build-up, the moment the competition starts, the action shifts to the on-field brilliance of global su­perstars giving it their best for their countries. Qatar, I would like to argue, will be no different. It’s the competition global football fans have been waiting for. It is the last World Cup for Lionel Messi, Cristiano Ronaldo, Luis Suárez and possibly even Neymar, and per­haps the last opportunity for Messi to win the crown that continues to elude him. Unbeaten for 35 games, Argentina do have a chance. The Copa America win has instilled self-belief and with supporters cycling some 1,500 km to come and support the team, it could well be the moment Messi fans the world over have been waiting for. Ron­aldo, who has not had the best of times of late, will be out there to prove a point. There’s none like him and the platform is set for one final flash of brilliance from the Portuguese superstar. Neymar, on the other hand, is already under pressure from greats like Roberto Carlos who have argued that Brazil do have the team to go the distance. According to Carlos, if Neymar isn’t able to take Brazil to the pinnacle of global football, he will have to face criti­cism because, in Brazil, they don’t settle for anything less.

For Indian fans, and they will be in Qatar in huge numbers, there is no better place than Doha to watch the spectacle. All three stadiums are within hours of each other and, for the first time, all 32 participating teams are in the same city as the fans. Doha is just hours away from Mumbai or Kolkata and there has never been a better opportunity for football fans to experience the World Cup up close. With fan zones being added by the day, there’s a lot for these men and women to do and Doha, it can be argued, will be a global melting pot for the first time since Covid. At the Tokyo Olympics, there were no spectators. Cricket can never come close to football. The Euro was staged with fans but it is ultimately a continental competition. Qatar 2022 will see a global conglomeration like never before and once that happens, critical commentary will give way to a celebration of sport, with football becoming the talking point.