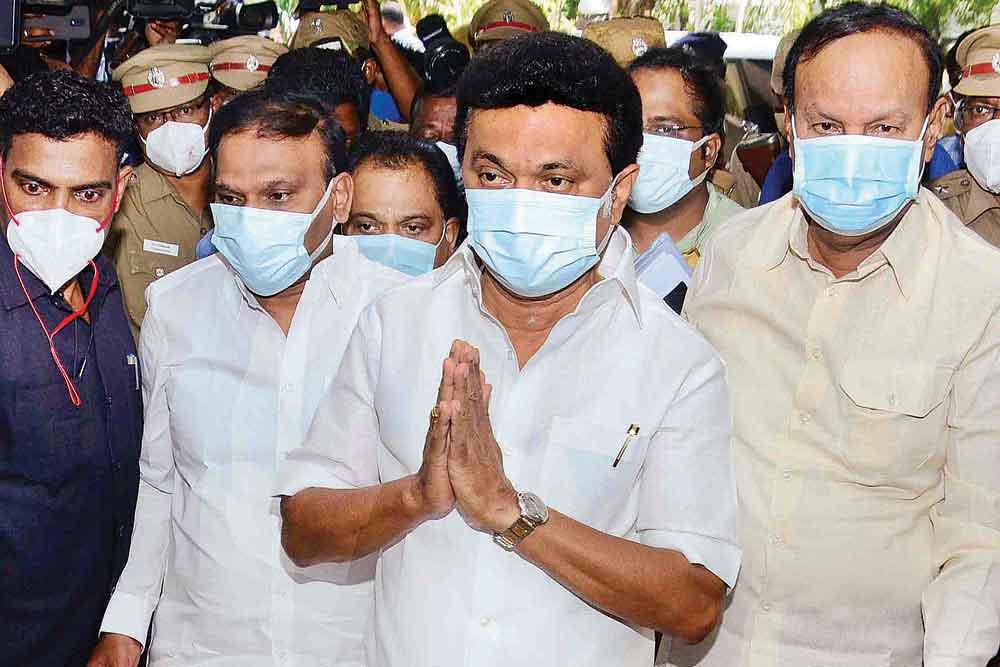 
ON THE MORNING of May 7th, as Muthuvel Karunanidhi Stalin takes oath as the next chief minister of Tamil Nadu, it will be as much a hat-tip to the past as a promise to the future. Time has been the medium of Stalin’s becoming, his assistant on the path to statesmanship since his incarceration as a young man in his 20s during Emergency, giving him what he calls his MISA (Maintenance of Internal Security Act, under which he was detained) scar and making a youth icon out of him for the Dravida Munnetra Kazhagam (DMK) headed by his father. Time felled him in his first-ever shot at an Assembly seat—Thousand Lights, Madras, which he lost by 2,000 votes to AIADMK’s KA Krishnaswamy—in 1984, the only time DMK patriarch Karunanidhi sat out an election. Time taught Stalin the art of governing a people according to circumstance—as mayor of Chennai between 1996 and 2001, when he built nine flyovers, privatised conservancy operations in the city and gave it an image makeover under his Singara Chennai (Beautiful Chennai) project; as local administration minister in his father’s cabinet in 2003; as DMK treasurer; as deputy chief minister; as heir-designate; as leader of the opposition in 2016; and finally, as DMK president upon Karunanidhi’s death in 2018. Stalin’s ascent as chief minister may have come a few years late, but it is not a moment too soon. It could have come in 2016 had he taken complete charge of DMK in the aftermath of its washout in the 2014 Lok Sabha elections. It could have come in 2017 when, after the merger of the two warring factions of the All India Anna Dravida Munnetra Kazhagam (AIADMK), then Chief Minister Edappadi K Palaniswami’s government fell short of majority with 19 MLAs withdrawing support. As the rebels urged the governor to intervene and institute the constitutional process, Stalin merely demanded an early floor test to prove the government’s majority and to prevent horse trading—he did not use the unholy immunity that politics affords to do backstage work, or try to seek promotion by intrigue.

“He had 90-plus MLAs. He could have rocked the Assembly. His attitude is different. He never rushed himself or his party into the well over issues of confrontation with the government. It is his cautious optimism and his patience in addressing problems that have endeared him as a leader,” says Ramu Manivannan, professor and head, Department of Politics and Public Administration, University of Madras. Manivannan argues that if one compared Stalin to Karunanidhi on the parameters of patience with people and administrative skill, rather than oratory, creativity and intellect, Stalin would rank above his father.


Even the faithful reposed faith in an atheist campaigning as a candidate of change amidst a pandemic, the fiscal decline of the state and the seemingly top-down policymaking approach of the Centre. Against this background, Stalin has emerged as an alternative

HAD KARUNANIDHI BEEN able in 2017, he would have seized power for DMK. Why Stalin didn’t or couldn’t [do so] remains a question,” says writer and political commentator Maalan Narayanan. “Leaders who enjoy a very strong image—from Jayalalithaa and Karunanidhi to Mamata Banerjee and Narendra Modi—can afford to behave arrogantly, but those consciously confecting an image for themselves, have to soft-pedal.” If dynasty is the denomination of politics, grace is that of success. And Stalin’s gracious response to his victory—responding to congratulations on Twitter, he has appealed to leaders from the opposite camp for suggestions and cooperation in scripting a better future—signals both an erasure and a reinscription of the personality politics of Tamil Nadu. He is his father’s son, yes, and he is more—a reasonable man of his times, ruling over an important discourse on federal structure and the future of education, health and the welfare state. “Stalin was the sole face of the DMK campaign this time round. They did not use a lot of Karunanidhi’s images or speeches. It was Stalin exuding the confidence of someone destined to come to power—the slogan ‘Stalin thaan vararu (It is Stalin who will come)’ —and Stalin tirelessly going to people in the villages and speaking not from a rostrum but while squatting among them, that DMK used for subliminal as well as overt messaging,” Narayanan notes.

A spry 68-year-old, his slight frame and the black hair he sports, reportedly on the advice of DMK election strategist Prashant Kishor, belie his wisdom. In an over-heated political campaign where many contenders, including Seeman’s Naam Tamilar Katchi (NTK), TTV Dhinakaran’s Amma Makkal Munnetra Kazhagam (AMMK) and Kamal Haasan’s Makkal Needhi Maiam (MNM), were trying to ransack the Dravidian movement for extractable principles, Stalin split no ideological hairs. He stood by the principles of inclusion and social justice, but was unafraid to break from tradition to promise Rs 25,000 each for up to one lakh Hindu devotees in a year to make a pilgrimage to any major temple in India, besides an allocation of Rs 1,000 crore for the renovation of Hindu temples. In an election that saw BJP make inroads in the state and win four seats—Coimbatore South, Nagercoil, Tirunelveli and Modakurichi—the fact that DMK, a party founded on rationalist ideology, managed to wrest most temple towns, including Srirangam in Tiruchirappalli district, the seat Jayalalithaa won in 2011, goes to show that even the faithful reposed faith in an atheist campaigning as a candidate of change amidst a pandemic, the fiscal decline of the state and the seemingly top-down policymaking approach of the Union Government. Against this fast-changing, always-dissembling background of polity and society, Stalin has emerged as an alternative—a talisman of state autonomy, social welfare and linguistic pride.

The DMK alliance’s 159 seats in a House of 234 have, however, fallen short of the precedented show of strength. Why did Stalin’s war cry of “latchiyam 234, nitchiyam 200 (234 is the aim, 200 are certain)” miss its mark, and how does it reflect on his leadership? “When Stalin led the party into the 2016 Assembly polls in his first major leadership role, and fell short of a victory, it was seen as a failure. But today, there is no question that he has emerged as the No 1, most accepted leader of the state,” says senior state Congress leader and Tiruchirappalli MP Su Thirunavukkarasar. “In 1977, facing his first Assembly election as founder-leader of AIADMK, MG Ramachandran won only 126 seats—comparable to DMK’s performance now. Could it be said that it wasn’t MGR’s victory? It was. The people voted for his leadership—just as they did for Stalin now.”

“We are yet to finish analysing numbers, but it seems clear that Seeman’s NTK (which has bagged 6.57 per cent votes, as against just 1 per cent in the 2016 Assembly election) hurt us across the state,” says a young DMK MLA. “Seeman, with his idealism and his showy speeches, has dissuaded a section of youth away from the Dravidian path, and this is worrying.” One man stood in the way of this trend, he adds. “It was Udhayanidhi Stalin.”

Until a few months ago, well-meaning DMK supporters were advising Stalin not to yield to his weakness, his 43-year-old son, actor and youth wing leader Udhayanidhi, who was already part of the party’s inner coterie and now looked to be casting about for a predictable route into the Assembly. His swift climb within the party ranks, compared to Stalin’s three decade-long-wait since his Assembly debut in 1989 to rise to the stature of president, did not make for a positive narrative, and AIADMK made sure of it. His candidature from Chepauk-Triplicane in Chennai came as no surprise. What followed did, however. In the course of his state-wide campaign, Udhayanidhi took every bait that was laid out for him and munched through them. He questioned the ethical calibrations of BJP accusing DMK of furthering the interests of its first family while alleging Jay Shah profited undisputed from his father’s power and position. “Raid me all you want. You don’t scare me. I am Kalaignar’s grandson,” he retorted, making a lively debate out of the missteps and foibles of AIADMK and BJP. “His easy, boy-next-door campaign style is paving the way for his future in the party. He is a leader who has been groomed to succeed Stalin at a future date. He was not called by the masses, but he has shown that he can handle his role well and with civility,” says Manivannan. The highlight of Udhayanidhi’s artful and entertaining campaign was a single brick, which he toted around to show what remained of BJP’s promise of an All India Institute of Medical Sciences for Madurai. The prop wasn’t made in Prashant Kishor’s dream factory, and it forced even the indifferent to take note. “For many youth who supported DMK this time, it is their first victory. They will have expectations. Instead of giving Udhay ministerial duties, he should be tasked with getting the state’s one-crore-plus youth on board for the 2024 General Election,” says a senior DMK leader.

Stalin’s gracious response to his victory signals both an erasure and a reinscription of the personality politics of Tamil Nadu. He is his father’s son, and more—a reasonable man of his times, ruling over an important discourse on federal structure and the future of education, health and the welfare state

AFTER DMK AS a party and a movement fell into decay a decade ago, a social articulation against BJP and AIADMK began on the ground that resuscitated the Dravidian mind, says Manivannan. “There was a sense that an efficient government is not always the right government, and that government does not represent the state.” The energy of this street-level movement, which manifested in the pro-Jallikattu agitation, in farmers’ demonstrations, in the protests against Sterlite in Thoothukudi, against the environmental degradation of Ennore in Chennai, against the discrimination of SC students, and against police violence and the Citizenship Amendment Act, was the lifeline that an etherised DMK was waiting for. Intellectually as well as on the ground, Dalit and Left outfits like the Dravidar Kazhagam, CPM and the Viduthalai Chiruthaigal Katchi (VCK), founded by Thol Thirumavalavan, helped bind such social issues of identity, individual freedoms and state autonomy together under the umbrella of Dravidian thought. The Dalit party VCK, contesting six seats as part of the DMK alliance, has won four, including, unexpectedly, two general category seats—Thiruporur and Nagapattinam. Thirumavalavan, who had won the Chidambaram parliamentary seat in 2019 for the DMK coalition and insisted on his party contesting the Assembly elections under its own party symbol, has pointed out that “those who tried to restrict, contain and isolate us only as a Dalit party, have been defeated.”

If there is an ideological heir to Karunanidhi, it must be Thol Thirumavalavan, for single-handedly de-silting the fount of the Dravidian discourse. He inveighed against the 10.5 per cent Vanniyar Internal Reservation Bill, summarily passed by AIADMK just ahead of the election to get the Pattali Makkal Katchi’s support, in the strongest terms, dubbing it a massive social injustice to other Most Backward Communities (MBCs) and Denotified Communities. DMK’s critique of the Bill remained muted, for it feared antagonising Vanniyars. While AIADMK did win districts like Dharmapuri and Salem, where both Gounders and Vanniyars consolidated in its favour, in other northern districts with sizeable Vanniyar populations, the DMK alliance rode to victory on the counter-polarisation that resulted from the move. Stalin and Thirumavalavan stand together today as pillars in the progressive substrate of Tamil Nadu politics. Kalaignar, “the man who toiled without rest” until he was laid to eternal rest at Chennai’s Marina, according to the epitaph he wrote for himself, would be proud.

The elemental intensity of Manoj Bajpayee makes him a class act on the big screen and a formidable force on OTT. The art and attitude of an original