What the next-generation investors can learn from Radhika Gupta 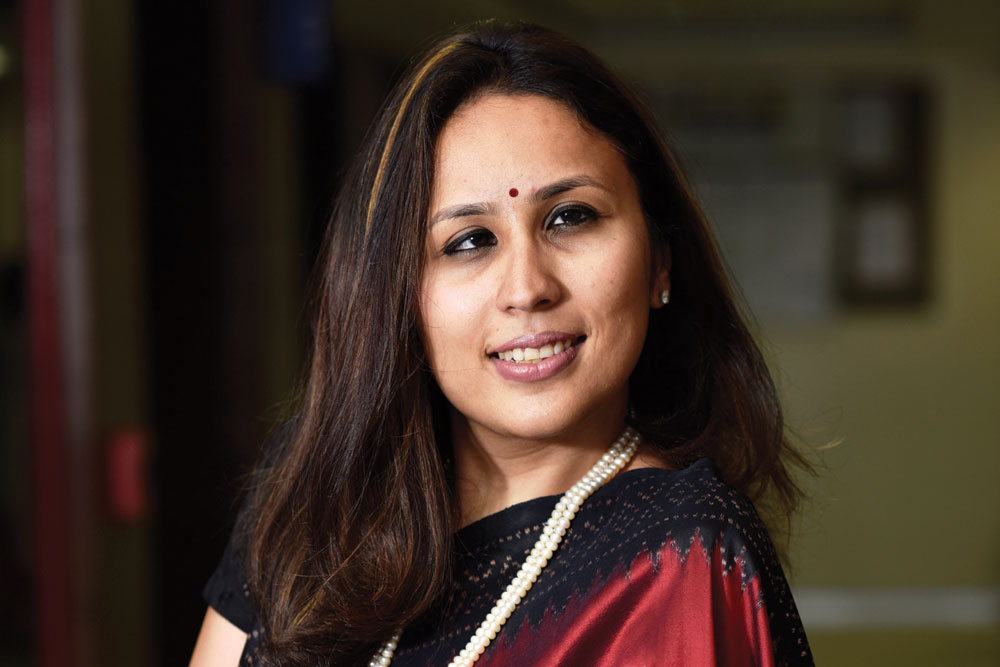 
IN 2005, HER RECRUITER at McKinsey & Company in Boston told Radhika Gupta that they were hiring her because she was “different and unique”. That seems to be the default impression about this 38-year-old, the first woman CEO of a major Indian asset management company, Edelweiss Asset Management.

Being “different” could be because of multiple reasons. For a Wharton graduate, she was an unusually shy person, she concedes. In fact, she had to work hard to transform herself into a public speaker because her job entailed interacting closely with people and addressing large groups. She had to take courses in public speaking and join a CEO forum in order to update her skills and educate herself even about the non-financial services sectors. One of the outcomes was Gupta’s 2018 talk titled “The Girl with a Broken Neck” which went viral on YouTube. In that, she narrates a personal tragedy: when she was born, the nurse put her in an incubator in an unwieldy manner, which meant that her neck would remain slightly tilted all her life.

Her life has been a journey of fighting odds besides the physical ones that included weight problems, Gupta recalls. After a series of rejections at job interviews, she was rushed to the hospital in Wharton for suicidal tendencies and depression, but she managed to get out of the hospital for the McKinsey job interview. After her stint there, she worked with Wall Street firms in simply the most turbulent period in its history—from 2005 to 2009, in the run-up to the global economic meltdown, and following it. All from the epicentre of tectonic financial upheaval.

Then, she and two friends—one of whom is her husband Nalin Moniz, a Wharton alumnus—returned to India to set up Forefront Capital Management, a hedge fund manager, in 2009. “Startups were not as popular back then as they are now. Settling down in India was also a big challenge. I had spent most of my time abroad,” Gupta tells Open in an interview, recalling the endless pressures of beating the infamous ‘Indian red tape’. They somehow managed to grow the business from ₹25 lakh to ₹2.5 crore in a year before it was acquired by Edelweiss for ₹200 crore in 2014. “The struggle in those years was huge,” remembers Gupta, who holds a Bachelor of Science in Engineering and Computer Science from the University of Pennsylvania’s School of Engineering and Applied Science. She was then made the CEO of Edelweiss Asset Management in 2017. “I had the pleasure of growing this company from a few thousand crores to ₹90,000 crore today,” she notes.

Gupta had to challenge herself to fit into new roles. “They always say each of us is a masterpiece but we are also a work in progress,” she points out, emphasising that she was the first one in her family to enter the corporate world. Daughter of an Indian Foreign Service (IFS) officer who had been posted in multiple geographies in the world, she thanks the IFS for shaping her initially. “My background has been a great boon for me. The Indian Foreign Service was a source of great adaptability for me because moving from one place to another every three years makes you extremely adaptable,” she explains, adding that such relocations early in life help one deal with change very quickly.

It was at Wharton, however, that she learnt to be ambitious and developed self-confidence. “The institution taught me to aim high,” she says, smiling. While employed with Wall Street firms at a turbulent time, she says she learnt “the art of how not to lose money, how not to be greedy, how to manage your emotions, and how to handle highs and lows,” Gupta says.

Then came the extremely uncertain phase of her life, launching a startup. “You learn so much about ownership. Basically, if you want to learn, there is an opportunity at each and every phase of your life. I also consciously try to invest in learning. I joined a CEO group called YPO a few years ago to learn from people in different industries and I am part of the World Economic Forum list. One of the reasons why I am so excited about the prospects of being at Davos is that I will have the opportunity to learn from minds that are global. I am always seeking ways to get better and better,” Gupta shares.


Handling other people’s money is a very big responsibility, Gupta says. Of the ₹90,000 crore in investments her company manages, nearly ₹30,000 crore is placed in equities and ₹60,000 crore in safer avenues

She goes back to talking about greed, which was and is the hallmark of Wall Street. “See, I don’t want to grudge anyone for the decisions taken then [ahead of the economic meltdown of 2008]. I was far too young and inexperienced back then. I think things are always contextual. It is very easy to look back and say we could have done this or that,” she says, but hastens to speak about her learnings from a student of markets: “One, markets are unpredictable. When you just think that it is a sea of calm, unknown unknowns exist and you know they take the system completely haywire. Two, I also think there is a notion of averages: markets can be out of sync with reality for some time, but they cannot be out of sync with reality forever. I think that is also a learning from the 2008 period. The third is that you need to have a calm head on your shoulders because opportunities come, notwithstanding the challenges.”

GUPTA, WHO was born in Islamabad when her father was posted there and later lived in Nigeria, Zambia, New York, Italy, Denmark and other countries, says that to make the most of our money through smart investments, we should have a strong sense of goals. She feels that investing, after all, is very personalised. “What is right for you may not be right for me. So, you should have a hankering for goals and invest in a way that works for you. Primarily, we should all be financially literate,” she quips.

Gupta, who spent some four years of early schooling in India at DPS Vasant Vihar and DPS RK Puram in Delhi, feels that the primary aspect of investing is to learn to control inner greed. “Finally, money is a number in a bank account and we do not need to boast about it at cocktail parties—that my portfolio did well, etc. I have seen people stretching themselves because of greed and the cocktail party factor pushes you to make the biggest mistakes,” Gupta adds.

Her mantra is simple: It is hard to earn money and it is harder to preserve it.

For her part, she has invested all her personal money in mutual funds. “I am a salaried individual and I do systematic investment plans (SIP). I highly recommend it to everyone. Take your monthly salary and have a target of the amount you want to save and keep doing SIPs,” she says. She invests in mixed asset classes, including what is called a balanced advantage fund which is a mix of equity and debt. She also invests in middle and small caps in some international funds.

We are clear about what we do with other people’s money, she reiterates, adding that “we want to be clear to people who give us money about how we are going to manage their money so that when things do not go by their expectations—there are many times that happens—then the relationships don’t sour.” This translates into placing a high value on transparent communication and earning trust.

As someone who has made it big in a field she had no exposure to prior to entering it, she has a few tips for young aspiring professionals. “Wall Street is not about how it is portrayed in the media or movies about being glamorous, having loads of money, etc. Don’t join the industry for those reasons. Managing other people’s money is hard work. It is much harder than managing your own. Remember, we are managing money that could be needed for somebody’s wedding, or hospital expenses… if you have that sort of responsibility, then you will treat other people’s money better than you do your money, and then you will do a good job.”

For a Wharton graduate, Gupta was an unusually shy person, she concedes. She had to work hard to transform herself into a public speaker because her job entailed interacting closely with people and addressing large groups

Gupta, who published a book earlier this year titled Limitless: The Power of Unlocking Your True Potential, has no great faith in YouTube advisers and the so-called “finfluencers”. She wishes them well and hopes that their pieces of advice are good. “But each person needs to make his own choices. What is good for someone is not good for someone else. That is the problem,” she says.

A FILM BUFF and an Urdu poetry fan, she says that she knows the lyrics of most Bollywood film songs although she admits she cannot sing to save her life. During Covid, in order to relax, she used to read Urdu poetry. Her father Yogesh Gupta, a career diplomat of the 1976 batch, writes poetry in Urdu. She has learnt a lot from him and her mother Arti, she says, including how to make do with less and be incredible parents who work hard and uphold family values and integrity in life. Gupta used to speak Italian and French very well and still knows these languages well. She was very good at pidgin English when the family lived in Nigeria.

As with the labels that she has earned, such as being the first woman in India to head an asset management company, she says that she doesn’t live for the labels. “But I also realise that role modelling is very important. Till now, there are too few women in India in my industry and in money management in general. In that sense, I think it is a good example for girls to pursue financial services as a profession.”

Asked about role models in her own life, she names her parents and her grandmother, the first working woman of the family, for pushing other women to pursue their goals. Then she adds, “Nandan Nilekani is someone I always look up to. He has made a tremendous impact in the private and public sectors. There has been a slew of successful women in corporate India too. You cannot take away credit from them. So, my role models are many.”

Gupta is not kicked about crypto because she says she is a conventional investor who advises people to invest only in asset classes that are regulated. “I think the regulatory status of this class [crypto] is still under question,” she says, emphasising that the common refrain among most people who invest in crypto is that “my friend has made a lot of money”. She says that no investment opportunity is going to run away, but that it is a little premature to say that crypto has acquired the status of a currency.

When she is not grappling with other people’s money and taking care of her three-month-old son Rémy Gupta Moniz, the head of Edelweiss Asset Management spends time watching Hindi movies on OTT platforms, her favourites being those made by Yash Chopra.

“They help me unwind,” she says, smiling.