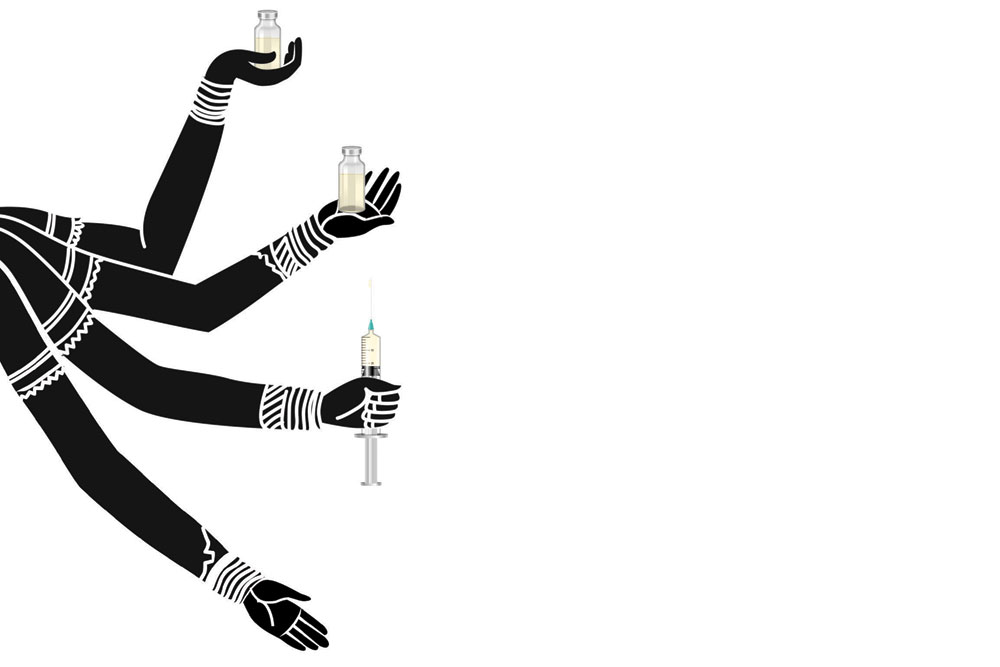 
Has ‘pandemic’ become a Hindi word? ‘Lockdown’ certainly has. ‘Covid’ is now part of universal language, familiar in every village from the North to the South Pole. Shared experience creates common words.

A year ago, even those familiar with the term associated lockdown vaguely with a lock. It now means a vast, voluntary prison for the collective good. ‘Pandemic’ never caught on because there is a perfectly good Hindi equivalent: mahamari. India is used to epidemics and pandemics, and therefore always had a word for the crisis. But this is our first experience of a country shutting its doors upon itself, so an English word, ‘lockdown’, became embedded in our speech.

A hundred years ago ‘flu’, the diminutive of ‘influenza’, took its place within the global communication grid because of the multinational pandemic which started in January 1918, and killed around 50 million people before it withered away, as mysteriously as it had come. The flu took more than twice as many lives as World War I, in which 20 million died and another 21 million were wounded. It became popularly known as the Spanish Flu, although it did not originate in Spain. The first case was recorded in Camp Funston at Fort Riley in Kansas on March 11th, 1918, and the murderous infection was carried to Europe by American soldiers sent to fight against Germany in the Great War. Like its current successor, it wrought havoc as a respiratory disease. America, Britain and France used wartime censorship to blank out stories for fear it might lead to panic in their armies, hampering the war effort; while neutral Spain’s papers printed the news, and so Spain was tagged with a negative reputation it never deserved. When the mysteries of nature mesh into the erratic tides of media, the effluence can spread a stain across a century.

Supplementary questions: did we translate the English common ‘cold’ into ‘sardi’ or was it the other way round? The Hindi word ‘jukaam’ predates ‘sardi’ so one assumes we picked up the English linguistic bug.

THE MOST INTERESTING event of the dark past year was surely the banging of vessels on a Sunday evening, at the call of Prime Minister Narendra Modi. Many theories circulated about the reason, none satisfactory. My own view is uncomplicated. It was done not to keep the spirits away but to keep the spirits up.

When a nation is forced to walk towards the unknown in a fog, you need some flares. In March 2020 we did not even have masks. The prime minister turned the rural but ubiquitous gamchha into a face-cover, while spurring India’s quiet entrepreneurial energy to the challenge of producing hundreds of millions of cloth masks. Today, we glibly book our place in the queue for a vaccine; in March 2020, self-appointed fearmongers (some from the medical profession) were inciting dread on social media with claims that there was no chance of a vaccine before a decade. We watched as the most developed and wealthy countries flopped and faltered and failed in their endeavours to bring this infection under control. Prime Minister Modi took one step at a time, until he found a way towards a clearance.

His greatest achievement during the pandemic has been, paradoxically, underrated because he succeeded only too well. He ensured that there was food in every kitchen all through the long, deserted months of lockdown. Even a minor panic would have triggered a wave of hoarding. If every urban family had stocked an extra two kg of grain or vegetables or sugar, these vital commodities would have disappeared from the market and prices shot up. The only solution was confidence in supply. Prime Minister Modi led the way, with the cooperation of chief ministers, and India took an unprecedented crisis in its stride.

WHEN INDIA DID not have governance, it had gods. Eight days after Holi, many celebrate Sheetala Ashtami. Sheetala Mata is an incarnation of Parvati, having emerged from a sacrificial ceremony seated on a donkey, carrying a trident, pot, silver broom, discus, water, neem, conch and a sword. As goddess of health, she sweeps viruses with her broom and cleans the world with water. Since her instruments are figurative, she should probably now carry a vaccine in one of her eight hands.

Bengal, where cholera was a merciless killer, offered prayers to Oladevi, wife of Mayasura, king of the asuras and daityas. She wore a blue sari and ornaments over deep yellow skin. Bengali Muslims adapted her into their popular beliefs. She was called Olabibi, and became the child of a Muslim princess who had disappeared and returned with a magic staff that destroyed disease.

Hobson-Jobson, my favourite dictionary and a treasure-house of Indo-English etymology, records that ‘cholera’ is an Indian word.

Did our sense of humour survive Covid? What is your evidence? Perhaps the saintly editor of Open will ask readers to send in contributions, publish those which are funny, and leave us to measure the quality and range of this life-asset.