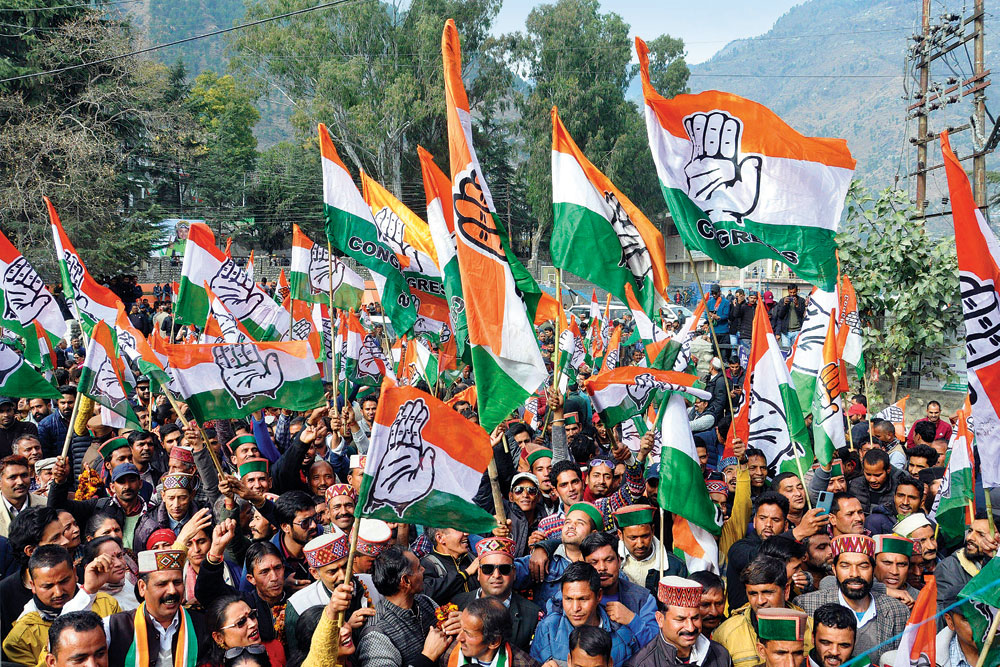 
IN THE END, DESPITE A VIGOROUS CAMPAIGN BY THE Bharatiya Janata Party (BJP), Himachal Pradesh stuck to its historical trend of voting out the incumbent government. In the 68-member Assembly, Congress won 40 seats while BJP was restricted to a distant 25. This was in stark contrast to various exit polls that indicated a much narrower margin between the two parties.

Since 1990, Himachal’s Assembly elections have witnessed a rotation between BJP and Congress in power. This time, BJP had injected a massive effort into the election campaign and pressed all its political stars into service. In contrast, Congress’ campaign was lackadaisical. Yet, in the end, Congress prevailed. A combination of factors, some peculiar to Himachal, ensured BJP could not disrupt the traditional pattern.

The first and foremost problem for BJP, which cost the party its chance at victory, was the huge presence of rebels. At one point, there were as many as 28 rebels, a figure that declined to 21 at the hustings finally. This was close to 30 per cent of all seats in contention. When the dust finally settled, 10 rebels badly marred the party’s chances, ensuring its defeat in these constituencies at the hands of Congress. It is worth noting that the difference in the final tally of seats won by Congress and BJP is 15, a figure very close to the 12 seats where the rebels dented the party’s fortunes or won outright. In two constituencies, BJP rebels won outright. In Nalagarh, Kishori Lal Thakur, a BJP rebel, won by a margin of 13,264 votes against his nearest rival from Congress, pushing BJP to the third spot. In Dehra, Hoshyar Singh, another rebel who contested as an independent, won and, as in Nalagarh, pushed the BJP candidate to the third spot.

There were other embarrassments for BJP. In Hamirpur, the home district of senior party leader and Union Information and Broadcasting Minister Anurag Thakur, an independent Ashish Sharma won by a margin of 12,899 votes against his nearest rival, Congress candidate Pushpinder Verma. BJP was relegated to third place in Hamirpur.

Rebels are a constant factor in Himachal Pradesh’s political firmament. The phenomenon of rebels affects both Congress and BJP. Given the relatively small size of the electorate, rebels can make or break any party’s fortunes. In this, too, the state has continued with its tradition. Congress had its fair share of rebels but they cost the party much less. The problem is acute for an incumbent party. For BJP, it was déjà vu: in 2022, it faced a similar situation to the one in 2012 when it contested as the incumbent. Then, too, the party high command and its leader in the state, Shanta Kumar, had tried to dissuade rebels but to no avail. Constituencies in Kangra district are especially prone to rebels. Interestingly, Indora witnessed a rebel candidate this year as well as in 2012. This time, two rebel candidates—Nirmal Parshad and Manohar Lal—garnered 5,912 votes, pushing the BJP candidate behind Congress. This clearly suggests that there is a hard upper limit to what the BJP brass could do.


The other issue that hit BJP badly is the problem of populism. Himachal Pradesh has some 2.25 lakh government employees. The state’s population is around 73 lakh. In relative terms, the number appears small but the political influence of these employees is well beyond their numerical value: from families to friends and to setting the wider trend of demands, these employees call the shots. Unlike many other states, where the private sector has a commanding presence, in Himachal, it is the ‘government sector’ that has an oversized influence in its political impact. This time, government employees were upset with the BJP government over the old pension scheme (OPS) issue.

BJP could not have committed itself to reviving OPS unlike Congress and the Aam Aadmi Party (AAP) which have agreed to bring back OPS in Rajasthan, Chhattisgarh and Punjab. The reasons are not far to seek: pensions are a major expense for the state government. In 2022-23, the state’s committed expenditure will eat up 77 per cent of its revenue receipts. Of this, 21 per cent is accounted for by pensions and another 42 per cent by salaries. It was only prudent for BJP to somehow parry the issue away. And that is exactly what its leaders did during the campaign. It turned out to be politically very expensive for BJP.

While BJP was tactful, it did not work. Chief Minister Jai Ram Thakur had said that only BJP was capable of implementing OPS. Congress, he had said, was misleading the people wherever it was in power, as the Old Pension Scheme had not been notified

Even a week before polling, the party refused to take the bait and did not make a promise on OPS. But Congress and AAP went for the kill. They promised to restore OPS and kill the “pay as you go” system of 2004. In late October, Delhi Chief Minister Arvind Kejriwal had said, “If the people of Himachal Pradesh and Gujarat give [AAP] a chance, we will implement OPS there too.” It is another matter that his party is nowhere in Himachal, but the damage was done.

While BJP was tactful, it did not work. Chief Minister Jai Ram Thakur had said that only BJP was capable of implementing OPS. Congress, he had said, was misleading the people wherever it was in power, as OPS had not been notified. The same message was repeated by Union Minister Jitendra Singh as well. Singh had told an audience in Shimla that only Prime Minister Narendra Modi and Chief Minister Thakur could find a solution to the issue. Criticising Congress, Singh had said that if it were serious, a solution could have been found when the late Virbhadra Singh was chief minister. These assurances, including the promise of a committee to look into the issue, cut no ice with the electorate. It is another matter that restoring the old scheme is not easy given the poor condition of public finances in most states.

Soon after results began pouring in on December 8, Thakur said, “I respect the mandate of the people,” and added that he would soon tender his resignation to the governor. He also wished Congress well and said that he hoped it would fulfil people’s wishes. Asked about the possibility of ‘horse trading’, Thakur replied that it was an imaginary fear and that it would be better for Congress to look into its internal tussles for the top job in Himachal.

One clear message from the results was about BJP’s inability to manage the political affairs in Himachal Pradesh. The party president, JP Nadda, hails from the state and had a major role in ticket distribution. There were other leaders as well who were involved in the exercise. The party is known for its organisational prowess and management down to the smallest electoral units. But none of this worked. Factionalism, the huge mass of rebels and the general political culture of the state ensured that it lost.

Congress paid scant attention to the state. Compared to BJP, its campaign was lukewarm. Yet, Congress managed to turn the tide in its favour in the state, a rare event given its string of defeats in assembly elections at BJP’s hands

The contrast with Congress could not be more glaring. Congress paid scant attention to the state. Senior Congress leader Priyanka Gandhi held a couple of rallies, most notably in Mandi. But compared to BJP, its campaign was lukewarm. The Bharat Jodo Yatra of Rahul Gandhi was nowhere near Himachal and Gujarat. Yet, Congress managed to turn the tide in its favour in the state, a rare event given its string of defeats in Assembly elections at BJP’s hands.

But the party that fared the worst was AAP which had at one time made Himachal Pradesh its testing ground. But after a few preliminary forays, the party’s top leadership simply disappeared from the campaign scene. It was expected that AAP leaders from the neighbouring state—Punjab—would chip in. That did not happen and Punjab Chief Minister Bhagwant Mann was seen in far-off Gujarat but not in Himachal. All this had a bearing on the results. While the party contested all 68 seats, it did not win any. But far from winning, AAP came a distant third behind Congress and BJP—and in many places it was even behind independent candidates.

Himachal Pradesh is tucked away between Jammu and Kashmir, Punjab and Haryana. Very often, it is thought to play a marginal role in national politics given the small number of members it sends to Parliament. But in this election, it has sent out a message—albeit a negative one—that India will have to contend with the issue of populism. In state after state, government employees and other sections of the electorate want to squeeze more out of emaciated government budgets.