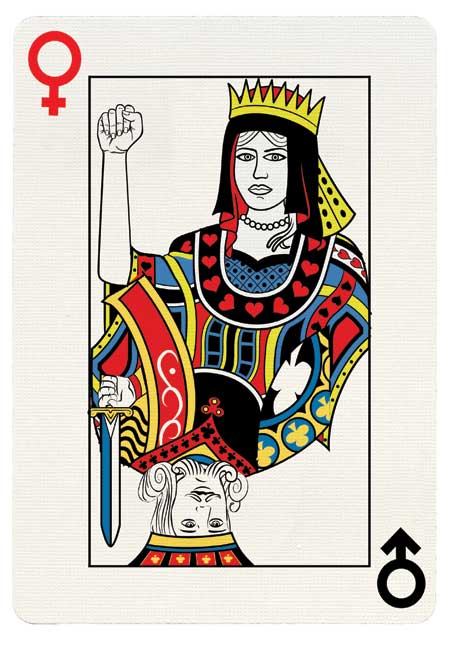 When Merriam-Webster’s Word of the Year (or the most looked-up word) is ‘feminism’, we can safely say that something is afoot. On the other hand, 2016’s word of the year was ‘surreal’, as life appeared ‘marked by the intense irrational reality of a dream’ (thanks to Brexit, US presidential elections, the death of Muhammad Ali, etcetera). ‘Feminism’ showed a 70 per cent increase over 2016, and that is reason to celebrate and introspect. We cannot sum up an entire year with a single word, but we can conclude that feminism was a leading topic of conversation. Yippee to that.

‘Feminism’ first entered an English dictionary in 1841. The definition read: ‘the qualities of females’. Today’s definitions are thankfully different. They read: ‘the theory of the political, economic, and social equality of the sexes’ and ‘organized activity on behalf of women’s rights and interests.’ In 2017, we glimpsed a ‘theory’ of equality moving towards a ‘practice’ of equality. There is a long, long, long way still to go, but a flicker of hope has been ignited. The author Chimamanda Ngozi Adichie writes in We Should All Be Feminists: ‘My own definition of a feminist is a man or a woman who says, yes, there’s a problem with gender as it is today and we must fix it, we must do better. All of us, women and men, must do better.’ In 2017, we have been forced to admit just how fucked up things are for women, and the need to fix it.

Change is incremental, especially when it comes to mindsets. People seldom stop thinking one way, and start thinking anew, but we can become more open to other possibilities. Reform can trump revolution. Revolution means an upturning, an inversion, which still leaves somebody on the top. Whereas change could simply be—‘Oh, I hadn’t considered that before’. And that leads to progress.

This year marks a shift in how topics of gender will be treated in the workspace. The bravado of men in offices—which arose from impunity (my power and position are inviolable)—hasn’t been busted, but it has been perforated. Caution is elbowing out insouciance. Awareness is swatting away indifference. ‘Not okay’, as a refrain, has gained brawn. Men and women are realising that it is not okay to send flirty messages to a subordinate; it is not okay to comment on someone’s cleavage; it is not okay to hire someone depending on their marital status; it is not okay to be prurient in office; it is not okay to forward porn clips on a work trip; it is not okay to rate colleagues by appearance. Men can no longer feign ignorance about their actions. The realisation has dawned—‘my actions can and will have repercussions’.

The signs are subtle but undeniable. Managers mention leaving their cubicle doors open when colleagues come in for a conversation. Fusty wooden cabins have made way for glass enclosures. Executives understand that hotels are not brothels. CEOs attempt to shift ‘evening drinks’ on Friday to ‘afternoon drinks’, so that working parents are not discriminated against. Bosses realise that extending invitations with the rider ‘My wife is not home’ is doltish behaviour.

To the cynic, all these could well be simplistic and obvious gestures. But it is telling that these conversations are gaining traction only now. The reason is simple: for the first time, we are seeing that a man’s predatory behaviour can be punished.

In the United States, the Harvey Weinstein case led to countless other mutinies and triumphs, especially in the entertainment industry, whether it was Kevin Spacey’s removal from House of Cards by Netflix, the condemnation of Louis CK, or the rise of the #MeToo.

The ripples of the Weinstein case could be felt in India too, first with the online movement #MeToo and then a ‘list’ of alleged sexual predators at Indian universities and the emergence of conversations and measures taken at workspaces.

While online platforms do play a role in drawing attention to a cause, the most significant moments in feminism this year in India happened on the ground. It was a year where the everyday Indian woman won a few major battles—on the street, in the arenas, in the courts.

Women have it bad in India, everyone knows that. India comes in 108th out of 144 countries in the Global Gender Gap report prepared by the World Economic Forum. Indian women lag behind in health, education, workplace and political representation. But these are all-too-familiar truths. In this landscape of savage and entrenched discrimination, heroes emerged. Looking back, 2017 will be remembered for women straining against traditional garrisons.

‘Run like a girl,’ ‘Throw like your sister’ have always been insults. But now we have new slogans, ‘Bat like Punam Raut’, ‘Lead like Mithali Raj’. These are players who have waged battles at all levels

Women’s rights activists and organisations have always spearheaded the feminist movement, but it is often individual women who have wrought change. There was no samiti behind Rosa Parks, just as there was none behind Shayara Bano when she first took up cudgels against Triple Talaq. Shayara Bano, a 35-year-old woman from Kashipur, Uttarakhand, was the face of the legal war against a patriarchal custom that was judged unconstitutional by the Supreme Court in September this year. She was the original petitioner in the case demanding that the talaq-e-biddat pronounced by her husband be declared void. She also argued that the practice of Triple Talaq violated the fundamental rights of Muslim women. For Bano, the Supreme Court’s ruling was personal rather than political. She doesn’t appear to see herself as a crusader for a greater cause. She is content now that her 11-year-old daughter will not have to face such regressive customs. Through her example, Bano shows how we can begin to build a fairer world. A world where men do not have a ‘unilateral’ say in how relationships begin or end. We need to appreciate the efforts of those like Bano, who, by choosing to fight for herself and her daughter, made it better for all of us. To deify her would be counterproductive, but valourise her we must.

Far from the courts, the other team that showed the spunk of women was the Indian women’s cricket team. Yes, India lost to England, but it was a game that shook—nay overturned— that most male of bastions, cricket in India. The gods of the game have always been a pantheon of men, but for the first time our gaze now includes those who have always played out of sight and out of mind. No one watched women’s cricket before this World Cup final. Fans and critics would ridicule the women’s international game as less engaging than the contests of boys in bylanes. Tunku Varadarajan says it well, ‘Yet even in defeat, they have changed the game forever. No Indian man can ever say now—without being pilloried or called a fool—that he does not watch women’s cricket.’

The 2017 Women’s Cricket World Cup Final wasn’t important for the result (the nine-run loss seemed technical rather than catastrophic), but for how it changed perceptions. ‘Run like a girl’, ‘throw like your sister’ have always been insults. Now we have new slogans, ‘bat like Punam Raut’, ‘lead like Mithali Raj’. These are players who have waged battles at all levels. Every sportsperson in India has to overcome systemic challenge with persistence and patience, but for a girl who likes sports, it starts as a child. For Raut, who grew up in the Mumbai suburb of Borivali, the clashes started as a 10-year-old who shunned tresses and dresses, choosing instead jeans, short hair and playing cricket with the boys.

The women who protested at Banaras Hindu University share a similar passion. They took on the college administration and even the police to support a student who was allegedly harassed by three men on campus when she was returning to her hostel. The university provided her little support and instead questioned her whereabouts. The women who shouldered the lathi blows had a simple ask—freedom with security. Many of these students have travelled from Bihar and Jharkhand, Chhattisgarh and Orissa, to study at BHU, and were often the first graduates in their family. As a 20-year-old sociology student told The Indian Express, “While taking our attendance, women housekeepers taunt us for wearing shorts or spaghetti straps inside the hostel building. And after all this, we are taught feminism in sociology classes. What is believed and practised here are regressive puritanical rules imposed on women in the name of Malviya mulya (the values of BHU founder Madan Mohan Malaviya) and sabhyata (culture).”

While it is easy to celebrate the obvious triumphs of our cricket team, or the petitioners against Triple Talaq, or a young girl like Hadiya who chose to follow her heart, and to hail an increased awareness of gender issues in the country, this year also exposed fault lines in the feminist movement.

Weinstein might be a watershed moment in the US, but there is no clarity and less consensus on how sexual harassment will be dealt with here in the future. Women who allege sexual abuse have found little or no support at internal complaint committees or campuses or offices. ‘Due process’ has often come to mean ‘no process’, especially if the perpetrator is powerful. The recent Delhi High Court ruling in the Mahmood Farooqui case—where the judge ruled, ‘Instances of woman behaviour are not unknown that a feeble ‘no’ may mean a ‘yes’… — shows how courts can undermine the meaning of consent. As women across time have raged, a yes is a yes, a no is a no. It is really not that complicated.

The list of alleged sexual predators in Indian universities that was widely circulated on the internet emerged from such frustration. As the Weinstein case showed, whisper networks are to be taken seriously. Women warn women about men who get flirty and grabby. But this list or the ‘shitty media men’ list that was splattered in the US come with their own dangers. Most feminists agree on the big principles of feminism. But with the lists, battle lines were drawn and fists raised. The ‘young’ feminists deemed the older ones moth-eaten, and worse, upper caste; the other group called the list supporters impetuous and boorish. The merits and failings of the list can only be understood under the umbrella of feminism.

Equality between the sexes can be achieved only if men and women are in battle together. A system like patriarchy has not just husbands, but also sons as beneficiaries. It is often bolstered by women. We can achieve equality only if and when men are treated as partners and not foes in the amphitheater of life.

While gender conversations might have grown in the workspace, the flip side is that men might conspire to reduce the number of women they hire. Of course, no one is going to come out and say this, but it is being uttered on the male whisper network. And that is truly frightening. All the good that has been done down the ages for feminism could be undone if it is made even harder for women to join and remain in the workforce.

Feminism is a movement premised on optimism; we can change, we must change. Men and women, we will do better, together.