He smiled as he killed 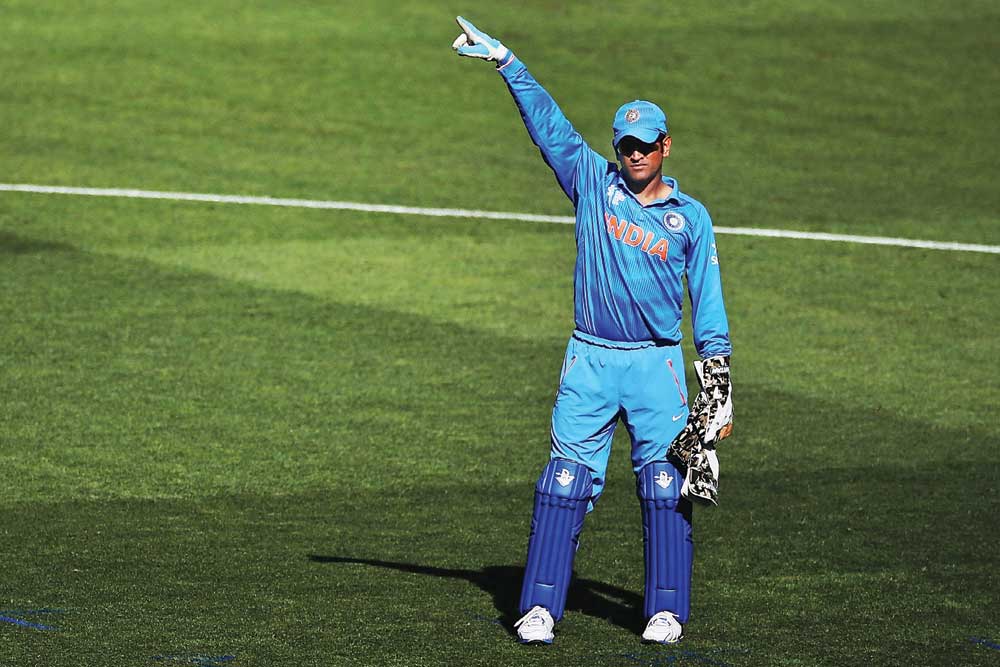 
There have been calls to confer the Bharat Ratna on Mahendra Singh Dhoni of Jharkhand and India. The former national cricket captain announced his retirement from international selection with a certain mofussil flour­ish, posting the news on Instagram with a Bollywood golden oldie as soundtrack. ‘Main pal do pal ka shayar hoon, pal do pal meri kahani hai.’ Even if Dhoni deserved India’s highest civilian honour—which he does not, as Sachin Tendulkar before him did not—the corny nature of his departure should rule him out. On aesthetic grounds, if nothing else.

And yet, make no mistake, Dhoni was a cricketer unlike any other India has produced. He is India’s first, true working-class hero. “A working class hero is something to be,” sang John Lennon. “There’s room at the top/they’re telling you still, but first you must learn how to smile as you kill.” Dhoni smiled as he killed. He was the TTE-turned-VIP: Train Ticket Examiner turned Very Important Person.

Dhoni is the second TTE who is a part of my life. The first was a man called Harihar Prasad Gupta—“Guptaji”—whom my father befriended when he (my dad) was a young district magistrate in Hardoi, in Uttar Pradesh, in the late 1950s. Guptaji met my father as he worked his way through a train one day, checking and punching tickets, and the TTE and the IAS-afsar formed a firm friendship. It was an unusual connection that cut across class lines, very rare in the India of the time. And it was, as it turned out, a lifelong friendship.

When Dhoni started to become famous—and it began to emerge that he had worked for the Indian Railways before he played cricket for India—I thought again of Guptaji. The two men, Dhoni and Guptaji, could not have been more different. Guptaji was a man locked into his lot, working for a lifetime at his government job, his pension bolted in, to ensure that his family would be secure, his house paid for—Neel Cottage, it was called, in Godowliya in Varanasi—and his daughters married into good homes. There were several daughters, more than was prudent for a man of modest means, but Guptaji sent them all to school, then college, and they all married well, and with dignity. Guptaji was a proud man. His was a job well done.

So was Dhoni’s. His India was more promising than Guptaji’s. There was money abundant for sport, and the avenues to excel­lence weren’t reserved—as they had been in Guptaji’s time—for the well-born and the privileged. The closest person to Dhoni that I can think of in modern Indian cricket is Eknath Dhondu Solkar—the unfashionable name ‘Dhondu’ veiled, mostly, in his playing career, by the initial D. Eknath D Solkar he was, for the most part—‘Ekki’ to his fans.

Solkar, the son of a groundsman at the Hindu Gymkhana in Bombay—a job that was, in those days, regarded as little better than a maali’s—played 27 Test matches for India between his debut in 1969 and his retirement in 1977. The small number of Tests played is startling. Looking back, he was a mainstay of Indian cricket in the years when I was a young boy. And yet, he played fewer than a third of the 90 Tests that Dhoni played for his country. An upstart like Rishabh Pant has already played 13. I suspect that Solkar retired with little money saved, and in a modest house. He died at 57 of a heart attack. He was the old India, talented, thwarted, mortal. Unlike Dhoni, who is a dollar multimillionaire, feted worldwide, and immortal—in the way successful sportsmen are these days.

Dhoni was a brilliant captain, a husbander par excellence of scarce resources—in this not unlike Nehru, who did a lot on the world stage with the very little that India had at its disposal. And yet Dhoni was also an assertive man, unlike Nehru, physically immense and active. Few cricketers before him have brought to the Indian game the athleticism and corporeality that Dhoni did.


The most notable thing about Dhoni is that he was, along with Virender Sehwag, the first Indian cricketer whom the Pakistanis feared. He defied the Pakistani image of the cultured but ineffectual Hindu

Witness his muscularity, his scampering swiftness between the wickets, his massive-arsed sixes—listen to Waqar Younis, as commentator, describe the strength of his shots—and his tirelessness. Dhoni was a physical phenomenon in a team that was historically elegant but unathletic, even borderline effete, peopled with (mostly) Brahmin boys who seldom played to win and whose bags were carried by other people. College graduates with servants at home and no life-or-death stake in the game of cricket. Soft babalog. Cannon-fodder for Clive Lloyd, or Imran, or Botham, or Steve Waugh.

THE MOST notable thing about Dhoni is that he was—along with the irrepressible Virender Sehwag—the first Indian cricketer whom the Pakistanis feared. He defied the Pakistani image of the cultured but ineffec­tual Hindu. They saw in Sunil Gavaskar a perfection­ism that was admirable but abstract, and in Kapil Dev a robustness that had been absent in Indian cricket for decades. By contrast, they saw in Sehwag a butcher among vegetarians.

But in Dhoni they saw a raw strength and stamina that to their minds was most un-Hindu. Who can forget the almost homo-erotic praise showered by Pervez Musharraf on Dhoni during In­dia’s tour of Pakistan in 2004, when the Pakistani dictator urged him not to have a haircut? (In those days, Dhoni wore his locks long.) Dhoni smiled broadly in response to a man who had waged war on India only five years earlier; but born on that night, per­haps, was his adamant commitment to the Indian armed forces. (He came to be an honorary colonel in the Territorial Army.)

This commitment could, sometimes, come across as unseem­ly. His insistence on wearing gloves with military insignia on them during the 2019 World Cup was a display of gaudy patriotism, unnecessary in the context. It was certainly at odds with the un­derstated quality of his captaincy and approach to the game—which emphasised the calm and the cerebral above all else.