A Thirst for Change 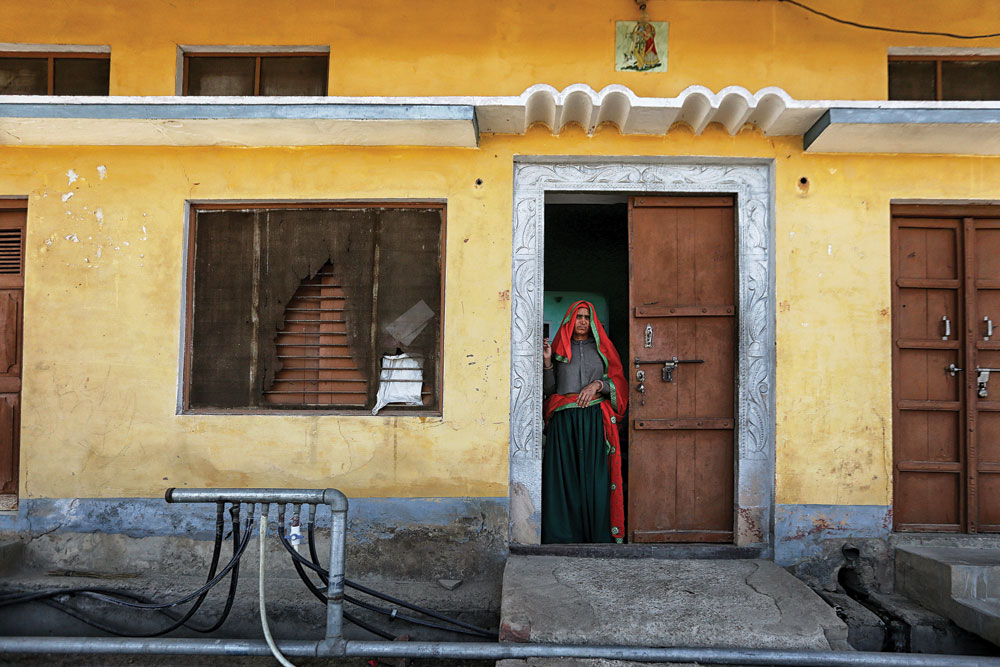 
A new sign outside the house of Paramjeet, who only uses a first name, identifies it as the residence of the sarpanch of Kothal Khurd, a village in Mahendragarh district in Haryana. The newness of the sign is a little strange considering that Paramjeet was elected sarpanch in 2016 and is gearing up for re-election, scheduled to be held sometime this summer. But for Paramjeet, the sign signifies a curious mix of pride, determination and shame. He had pledged it would go up only once he had managed to change the face of the village, sinking as it was under the weight of its own leaking pipes and garbage mounds. Today Kothal Khurd boasts paved pathways better than even some urban centres, clean drains, solar lights, well-developed common areas and a thriving community spirit. It was only after he had achieved all this that Paramjeet believed he had earned his post and finally put up the sign in 2019. “Who would want to put up their name amidst muck?” he asks.

Today Paramjeet’s name features prominently not only outside his own house but also in press releases issued by the Union Ministry of Jal Shakti as a shining example of success under the Jal Jeevan Mission (JJM). Launched in 2019, JJM aims to bring potable tap water to every rural household by 2024. Kothal Khurd is one of the villages which has already achieved this goal for its 342 households.

In his previous avatar as an Indian Army soldier, Paramjeet had served in almost all corners of the country by the time he retired. In Rajasthan he had observed how locals harvested rainwater, while in Odisha he witnessed locals struggle for drinking water. In Kashmir he had even melted snow for drinking water, while Maharashtra introduced him to the looming dangers of drought. “Long story short, by the time I came back, water conservation was already an issue of great importance to me,” he tells Open.


Though rich incomewise, Kothal Khurd’s quality of life had remained poor. The reason behind this paradox was the underground waterpipes that were constantly leaking owing to wear and tear. “This meant that there was always slush in the village. People built kothis [bungalows] but there was no way to reach them. Only a camel cart could reach the gates. We used to walk by following in the footsteps of those who had gone before us, literally,” says Omkar Yadav, a 54-year-old farmer. Stagnant water and slush also meant the constant fear of dengue and other waterborne diseases. Yadav says his wife was regularly unwell. “Even then we did not fear the mosquitoes as much as we feared the slush,” he says. The women of the village still wear veils in the presence of other men. Many a time, in a bid to cover their faces while returning from the fields or after filling water from the community taps, they would slip and fall in the slush, spilling the water and hurting themselves.

Paramjeet started by disabling the underground pipes. Illegal water connections were another issue that he had to grapple with. Kothal Khurd is located in Haryana but its topography has far more in common with its neighbouring state Rajasthan. An undulating landscape means that the houses of the village are situated at different heights. While the houses at the lower level got water easily, the ones at a height were often left struggling. Paramjeet joined hands with the Public Health and Engineering Department to enable his mission of improving the health of the village by tapping JJM.

Overhead galvanised iron pipes were installed for the water supply. Convincing the villagers to break the stoop of their homes to allow the passage of overhead pipes was just one small part of the mammoth community outreach he had to undertake. Along with a local mason, Paramjeet would leave his house by 5 every morning to measure the heights at which the overground pipes had to be located to ensure that the water reached all households equally. There are taps on raised segments of the overground pipes that cater to the number of households in a particular stretch. There are three borewells that provide water to the village. Each borewell services eight lines. Two of these are run on solar energy. In less three hours, every household in the village gets enough water for its daily needs and storage. The aim, Paramjeet says, is to minimise waste. A spare motor is always at hand in case there are accidents like a burnt motor halting the water supply. Four water tanks have been constructed in the village, each with a capacity of 12,000-14,000 litres and fitted with twist taps to ensure that there is a 24-hour supply.

Elected in 2016, Paramjeet pledged he would put a sarpanch sign outside his house only after getting water supply to each house in his village. Today his name features prominently not only outside his own house but also in Union ministry releases

Paramjeet faced a lot of opposition. No one wanted to pay the one-time fee of Rs 500 for a legal connection, especially those who already had an illegal or a private connection. JJM’s emphasis on information, education and communication, which relies heavily on the volunteer work of local youth, was effective here. “I had people shut doors in my face when I asked them to upgrade their connections. People were content with their private connection because they knew that even though the supply timing was erratic, they would get water,” said a local volunteer.

At present, more than 5 crore rural households in India have tap water, of which 2 crore have been added under the scheme. However, the country has more than 19 crore rural households. JJM has been lauded for its aspiration but tap water in houses has been a longstanding promise of several governments at the Centre and states in the past. Last year, Prime Minister Narendra Modi himself said, “In the ’70s, Ram Manohar Lohia had said women faced two problems—toilets and water. Governments have come and gone. But we decided to fulfil Lohia’s dream.”

What made the Swachh Bharat Mission such a success was its multipronged approach with emphasis on community involvement. A similar approach would be needed for JJM, say experts. “There will have to be location-specific approaches that take into account the climate conditions, topography, water endowments, etcetera,” says Sayanangshu Modak, a water expert at Observer Research Foundation Kolkata. Ultimately whatever solutions the state comes up with have to be run by the locals, says Modak, and hence community involvement is key. A bottom-up, participatory approach that starts right from the planning stage will be vital to making JJM work.

Two other concerns are crucial to understanding and making JJM successful: groundwater conservation and pollution. Water sources free from contamination are integral to the scheme; to tap these, extensive mapping on the ground, literally, will be needed.

In Kothal Khurd the water table has been around 290 ft for some time now though the village is blessed with four seasonal ponds. The work for the laying of the pipelines was accompanied by the building of a groundwater surface recharge pond—which is a source of pride and joy for Paramjeet. Located some distance away from the main village, the recharge pond is abutted with a walking track and a few exercise options such as a chin-up bar and ropeclimbing. “During monsoons the pond fills up and we have seen a direct impact on the water table which has now risen by over 40 ft to 250 ft,” says Paramjeet.

But the biggest success story in this village is not that of the connections or the improved water table but rather of the women whose lives have taken a turn for the better since the water started coming straight into their kitchens. Usha Bhatti, 60, talks about waking up every morning at 4 to stand in a queue at the community taps in the village to stock up water for the daily needs. She and daughter-in-law Sanju would make multiple trips, balancing several utensils, and on some days even drag their buffalo along to allow it to drink water at the source itself. “Our entire lives revolved around water: when to wake up for it, how long to wait for it, bringing it back. I feel as if I am sleeping properly for the first time in my life,” Bhatti says. At the other end of the village, sisters-in-law Urmila and Sangita Devi are proud of a small stretch of green they have now cultivated in their backyard. Water collection earlier meant that every drop was precious and gardening was not an activity they could afford. In India it is women and girls who struggle the most with water scarcity and tap water supply at home frees up hours for them, not to mention reducing physical labour immensely.

In January 2020, the Commissioner of Mahendargarh felicitated Kothal Khurd under the Mera Gaon Swachh Gaon campaign. In the village, Paramjeet and other panchayat members have listed out the works carried out by them, 50 in all, on two brightly painted walls. It includes everything from the borewells, the tanks built to the pathways. He is not sure what his chances are in the upcoming elections but he hopes that whoever comes next carries forward the work of water management he has started because “water is a resource we cannot create. We have to respect nature in order to keep taking from it.”