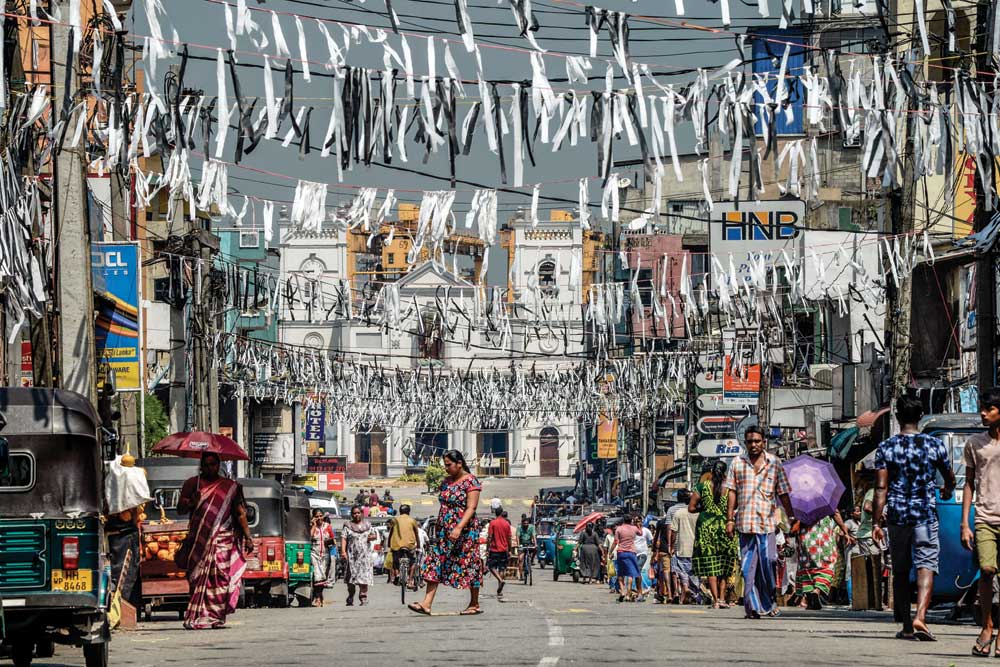 “We pass through this world but once. Few tragedies can be more extensive than the stunting of life, few injustices deeper than the denial of an opportunity to strive or even to hope, by a limit imposed from without, but falsely identified as lying within.”

SRI LANKA WAS not just a sitting duck for another terrorist attack. It was a prime breeding ground. And it wasn’t just the lax security even if that would have also been a factor with whoever masterminded Easter Sunday’s horrific attacks on Catholic churches and city hotels. One can argue that when terrorists strike, their targets could literally be anywhere, and in many instances state authorities and governments are caught unawares. We have plenty of examples, including the 9/11 attacks in the US, and more recently, the Christchurch Mosque Shootings on March 15th, 2019 in New Zealand.

But this attack in Sri Lanka was not perpetrated by a lone, hate-filled White supremacist gunman acting off the grid, as was the case in New Zealand. This was organised terror. As was 9/11. Terrorists carefully masterminded a heinous plan that ultimately was a resounding success—for them. With tragic and lasting consequences for Sri Lanka.

This achingly beautiful tear-shaped nation has already suffered decades of violence and bloodshed. But Sri Lanka’s cursed history is not just dogged with ethnic violence but strangled by successive governments who have not only in some instances been known to instigate, but actively support racial tensions, communal disharmony and violence against minority communities.

It is not just the maniacal Rajapaksas that must shoulder blame for this horrendous situation. The current government must also be held accountable. With its egoistic and largely corrupt coterie of ministers, a weak and ineffectual prime minister whose motto in life appears to be to view everything through tinted glasses, a divisive and ill- educated president, and if that cocktail is not distasteful enough, both leaders, and even the rest of them, are at loggerheads with each other. The rivalries and betrayals within United National Party is hardly Sri Lanka’s best kept secret. This is Sri Lanka’s Macbeth. A tale of tragedy, bitterness and loss. Consistent and constant loss. This is the tale of a society that is torn, separated by communal tensions and economic heartache. The story of a country, a nation, ripped, by the inept, the ineffectual and the utterly corrupt. If ever a political fallout has played out on the world’s stage, with devastating consequences, it has to be Sri Lanka.

Easter Sunday’s horrific attack on an unsuspecting community could perhaps have been prevented but wasn’t mainly because the country’s coalition government has been feuding since October last year. On October 26th, 2018, Sri Lanka plunged into constitutional crisis after President Maithripala Sirisena abruptly dismissed Prime Minister Ranil Wickremasinghe and replaced him with Mahinda Rajapaksa. The drama ended on December 13th, when the Supreme Court ruled that Sirisena’s actions were unconstitutional. Rajapaksa was forced to step down as prime minister. But that did not end the political crisis. Tensions mounted and tempers continued to flare. So much so, the prime minister and president avoided each other like the bubonic plague.

This situation resulted in a further slowing down in ensuring truth and justice for very serious rights violations which had been committed during the 27-year-long civil war between the separatist Liberation Tigers of Tamil Eelam (LTTE) and government forces. In its 2019 report on Sri Lanka, Human Rights Watch said that in September 2018, the newly formed Office of Missing Persons (OMP) recommended interim relief for victims and witnesses. However, the ensuing political changes rendered their viability uncertain.

Promise of security sector reform remained elusive. The government forwarded several drafts of new counter-terrorism legislation, which local groups and the international community criticised for being overbroad, despite some genuine reforms. Violence against minority communities, particularly against Muslims continued, and led to at least two deaths in 2018.

Sri Lanka’s tragedy is that it was presented with an opportunity to rebuild and ensure reconciliation. To give back dignity. To lift up lives that had long been stunted. But it failed miserably. After the defeat of the LTTE in 2009, instead of addressing allegations of serious violations by both sides, the Rajapaksa government suppressed media, targeted rights activists, and continued to arbitrarily detain and torture perceived opponents. The new government that took office after Rajapaksa’s electoral defeat in 2015, pledged at the United Nations Human Rights Council to ensure accountability for conflict-related abuses. However, by 2018, the coalition Sirisena-Wickremasinghe government had failed to make much progress on transitional justice. Of the four mechanisms adopted at the Human Rights Council—an office on missing persons; a truth and reconciliation commission; reparations and non-recurrence; and a special court to ensure accountability through prosecutions—only the first had been established, three years later, since this government took office in January 2015.

Unfortunately for Sri Lankans, the country has long been held victim to the machinations of politicians who no longer understand the meaning of the word integrity, and are far from selfless

Additionally, despite pledges, the government failed to repeal and replace the Prevention of Terrorism Act (PTA), a draconian law widely condemned for including an overly broad definition of terrorism and lengthy administrative detention provisions that have facilitated due process violations, including the use of torture, to obtain confessions.

In July 2018, Ben Emmerson, former UN Special Rapporteur on the promotion and protection of human rights and fundamental freedoms while countering terrorism, released a report on Sri Lanka that concludes progress on overhauling the PTA has ‘ground to a virtual halt’. A counter-terrorism bill proved to be far from perfect. Problematic aspects of the bill included permitting detention without charge for up to one year and ambiguity on critical definitions of what constitutes an offence of terrorism. The bill is far from being compliant with international human rights law, and has the potential to be used, as in the past, to target peaceful dissent against government.

In March 2018, local altercations burst into anti-Muslim riots, leading to the death of at least two people. In recent years, Sri Lanka has witnessed a spate of anti-Muslim violence linked to ultra-nationalist Sinhalese Buddhist groups. Last year, the attacks began in late February in the eastern district of Ampara, followed by clashes in Kandy. Observers reported that two mosques and dozens of homes, small businesses, and vehicles were destroyed. Authorities arrested several suspects in the attacks, but concerns remained about police inaction during the violence. These incidents speak of the communal tensions that have continued to simmer.

What is important to consider, at this moment when Sri Lanka is once more a nation in mourning snared in a vice-like grip of tragedy, is whether the tragic events could perhaps have been prevented had this coalition government at the very least been on talking terms with each other. But they were not.

Unfortunately for Sri Lankans, the country has long been held victim to the machinations of politicians who no longer understand the meaning of the word integrity, and are far from selfless. Their political pledges are ambiguous at best, and outright lies at worst. Anyone daring to hold them accountable are immediately branded a traitor or worse, a terrorist or ‘LTTE sympathizer’. For instance, in June last year, a magistrate’s court in June handed down a sentence to Secretary General of the Bodu Bala Sena (BBS), a hardline Buddhist group, for threatening human rights defender Sandhya Eknaligoda who has been pursuing justice for the enforced disappearance of her husband, Prageeth Eknaligoda. This was a rare case of victory for human rights defenders and also against Buddhist leaders rarely held to account for their actions. Soon after the verdict this year, Sandhya was smeared as a supporter of the LTTE and was taunted with threats of disappearance, death and violence against her children in a series of menacing social media posts.

This is so very typical of Sri Lanka.

Since gaining independence in 1948, Sri Lanka has remained linguistically and racially divided. PlantingBuddhism as the platform for Sinhala nationalism, the state was formed. Sri Lanka’s majority Buddhists will pounce on any perceived threat, to what is strongly espoused and held sacred in Sri Lanka—Sinhala Theravada Buddhism.

In July 1983, following large-scale communal riots perpetrated by the majority Sinhalese on the Tamil community, a full-scale war broke out. Having suffered decades of discrimination, minority Tamils retaliated. Led by a fascist terrorist organisation, the Liberation Tigers of Tamil Eelam (LTTE), Sri Lanka was subjected to a bloody ethnic war that lasted 27 years.

The country’s military responded in kind. Tens of thousands were murdered. Both by state government forces and the LTTE. Finally, the LTTE were crushed in May 2009. During the final battles, at least 40,000 civilians were estimated to have been killed.

But communal hatred and racial bigotry did not end there. It was not long after Sinhala Buddhist nationalists turned their attention on the Muslim and Christian communities. Virulent, violent Buddhist mobs, in many instances led by saffron-robed monks, repeatedly attacked Muslim and Christian places of worship. The most recent attack being on a Christian church on Palm Sunday this year. Pre-2015, the racist and violent mobs appeared to have political backing. Post-2015, Prime Minister Ranil Wickremasinghe and President Maithripala Sirisena, simply turned a blind eye. Justice has never been served. The perpetrators are never tried, nor sentenced.

Perhaps a radical jihadist movement did indeed decide to perpetrate a heinous crime on an unsuspecting populace and community on April 21st , Easter Sunday. It is impossible to draw any conjecture or comprehensive possible scenarios at present. Certainly not after the Islamic State (IS) has claimed responsibility.

What is troubling though at this stage is to ponder if the rapid arrest and detention of Muslims since the attacks is one more knee-jerk reaction—of which we have witnessed a thousand-plus during Sri Lanka’s 27-year long war. When the country was witness to innocent Tamils, by the thousands, being ‘rounded up’ in search and cordon operations and detained, under Sri Lanka’s dreaded and oppressive PTA, that was used with vigour, to hunt, to out an ethnic minority community.

Easter Sunday’s attacks have currently lent a whole new dimension to these ongoing communal tensions. There is now bound to evolve tensions between Christian Tamils and Muslims, who populate Sri Lanka’s east and northern peninsula, including her western coastline. Sri Lanka, if she does not exercise extreme caution, will see a whole new wave of ethnic tensions that if not controlled, could erupt into yet another decade, if not more, of bloodshed.

Since the April 21st bombings, President Maithripala Sirisena has imposed a national emergency under which the military has sweeping powers to prevent any form of communal violence from erupting. But it has to be carefully scrutinized and ensured that the military, almost entirely made up of Sinhala Buddhists, does not use or, rather misuse, their powers, to hunt down minority communities and subject them to atrocities that the Tamil community had to undergo during the height of Sri Lanka’s ethnic war.

The Bloodstained Cross
Prayer After Horror
Rising from the Ashes