Indian and West Indian legends look back on June 25th, 1983 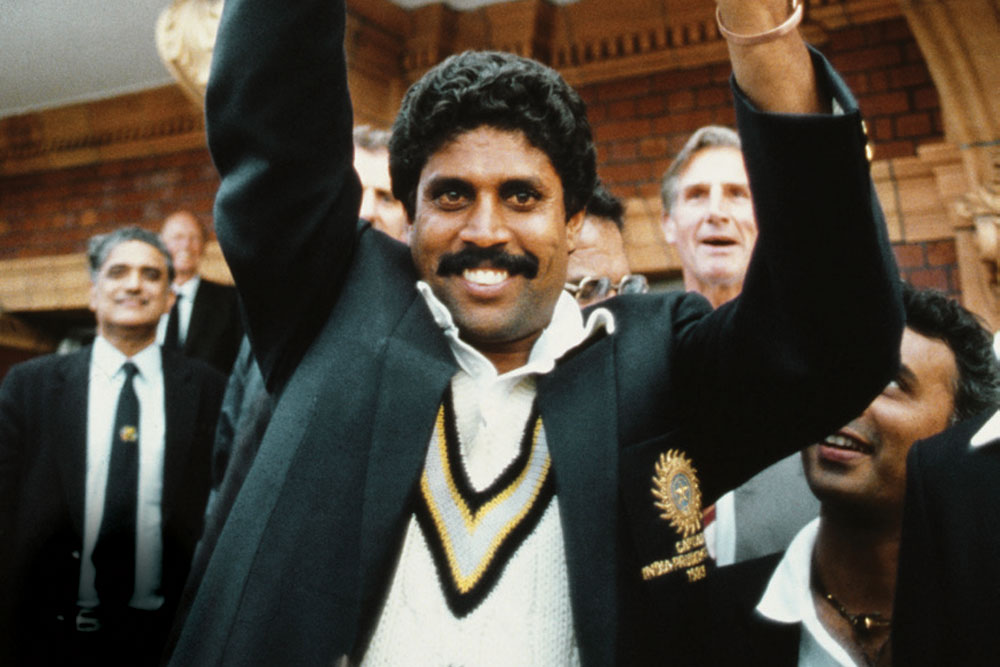 
FROM VITRIOL TO VALIDATION While the final has been much talked about and now immortalised on celluloid, the other match of immense significance was the victory over England in the semi-final. This was more because of the derisive reportage in the British press from the start of the tournament, a pattern of sneering that climaxed when it was known that England were pitted against India for a place in the final. English writers were sure of England winning and, as John Thickness declared in The Standard, a semi-final against India had given England a virtual passport to the final. Similarly, for Matthew Engel of The Guardian, there was no rational explanation for India’s triumph over Australia and entry into the knockouts of the tournament. The worst, however, was David Frith. Ahead of the tournament, Frith had urged the Indians to withdraw from the competition, a suggestion that provoked serious outrage from Man Singh, the erstwhile prince of Jaipur, who was then a resident of the US. Writing after the Indians had won the tournament, Man Singh stated, “I try to keep up with all the cricket news and scores by reading British journals and papers. I used to subscribe to another leading journal but since its writers were too biased, I decided to change to Wisden. I find now your journal is guilty of the same sin. I like to read about cricket from a writer who is fair in his reporting, not one-sided. I refer to David Frith’s preview of the World Cup in the June WCM. He really berates the Indian team and suggests that they should withdraw from this tournament. I don’t know how far back he goes but I go back quite a way, and back in 1948, when [Don] Bradman’s Australians—with Lindwall and Miller—were demolishing England with scores as low as 52 in Tests, no one suggested England should withdraw from Test cricket.”

Much has been written on 1983 in the last four decades. That the achievement had not been digested overnight in India is evident from the rather tame match reports following the stunning victory. It was only a day later that reality had dawned and the Press Trust of India reported: “Jubilant Indian players and their supporters celebrated India’s sensational win in the World Cup with champagne and Bhangra till the early hours of yesterday morning.” Even Pakistani stalwarts like Abdul Qadir and Sarfraz Nawaz joined the Indians, and the huge bottle of champagne that Amarnath had earned as Man of the Match was emptied in no time. The report added, “Indian supporters, many carrying the tricolour would not leave the Lord’s cricket ground hours after India’s victory as they waited for Kapil and his team to come out from a reception hosted by the MCC. Later, they went to the hotel to cheer their heroes.”

The headlines in the English papers summed it up perfectly. The Times declared, “Kapil’s men turn world upside down: Cannon fodder turned cannon.” The Sunday Express reported that India’s victory was the biggest upset in cricketing history. Finally, Tony Lewis wrote in The Sunday Telegraph that India had performed one of the “most mystical acts in her long cricket history.”

THE ADROITNESS OF AMARNATH

The one cricketer who capped the best phase of his cricket career with match-winning performances in the semi-final and the final was Mohinder Amarnath. Having started his career as a slow medium-pace bowler, much like his father in the 1930s, Amarnath gradually turned himself into the mainstay of India’s middle order in the early 1980s. Fearless against lethal fast bowling and with a penchant for playing the hook shot, Amarnath was outstanding against Imran Khan in Pakistan in 1982-83 and followed it up with a superb series in the Caribbean against Malcolm Marshall and the Caribbean pace battery. Hit on the head a few times in his career, telling blows that could have damaged him forever, Amarnath had turned fearless by the time he went to Pakistan and subsequently to the West Indies.


Clive Lloyd was emphatic in declaring there was no question of complacency. The West Indians had lost to India in the opening round of the tournament and knew what Kapil and his men were capable of. The Indians were not a team to be taken lightly

“The experience of playing quality fast bowling for close to six months leading into the World Cup helped us a great deal. I was batting well and carried the good form into the tournament. What made it more satisfying was we beat Australia, England and the West Indies in the last three games we played,” he remembers with fondness.

As vice captain and one of the seniors on the team, Amarnath had the added responsibility of mentoring Kapil in times of crisis, and he did so with aplomb, scoring a valuable 46 against England and 26 against the West Indies, while coupling his returns with the bat in the final with impressive figures of 3/12 with the ball. Rarely has one individual had such an impact in a World Cup semi-final and final.

The one question I have posed to almost every past West Indian great is how they look back at 1983. Is it something they have deliberately tried to distance themselves from? Was it a bad dream, which is not to be spoken about? Or was it something they had anticipated, something which wasn’t a miracle after all? Among the many West Indians interviewed, it was most fascinating to hear Clive Lloyd and Jeffrey Dujon speak on the subject.

For Dujon, it was just a bizarre day. He was insistent that June 25th, 1983 was different, a day when he had a feeling that something uncanny would happen. In fact, while returning to the pavilion after having bowled India out for a paltry 183, the West Indians hardly rejoiced. Rather, Dujon remembers mentioning to Andy Roberts that he was convinced they would struggle to overhaul the relatively small target. “I am not a superstitious person in that sense. But I had this strange premonition that day was different. I knew we would struggle, and Andy agreed with me. Even the way I got out was destined. I had struggled hard to bring the match back in our favour and at 119 we just needed 65 more runs to win. Another 30 minutes of batting and it could have swung our way,” said Dujon.

It wasn’t to be. “It wasn’t an unplayable delivery by any means but I could not help but edge that ball onto my stumps. The gods were with India. The cricket world was destined to change,” he concluded.

For Lloyd, 1983 remains a melancholic memory that he has relived many times since. While the wound has healed with time, the scar remains. The first time I discussed the 1983 World Cup at length with Lloyd was in Oxford, in 2009, during the ICC Centenary Conference, which I had the pleasure of organising. Lloyd had come for two days and stayed in the St John’s College Alumni Guest Accommodation in the very next room to where I was. And on each of the days he was there we would end up chatting till 2 or 3AM. Lloyd in a good mood is one of the best storytellers of the modern game. A real great, he has seen the game transform into a commercially successful spectacle and has presided over the transformation. Chasing a record third consecutive World Cup title as captain, Lloyd was emphatic in declaring there was no question of complacency. The West Indians had lost to India in the opening round of the tournament and knew what Kapil and his men were capable of. India were not a team to be taken lightly. “They had beaten Australia and England on their way to the final and had some excellent all-round cricketers in the team,” Lloyd said.

It was just that the final was a bad day, a day when nothing worked for the West Indies when they came out to bat. “Bowling India out for 183 was a very good effort, and on most days, we would easily chase this score down,” he lamented. “But for cricket, however, it was a great result. It helped Indian cricket turn into something fundamentally different and world cricket, too, benefitted from this turnaround,” Lloyd argued. Finally, the notion that the West Indies could be beaten had seeped in and it had the effect of breaking the West Indian monopoly. “Even when we beat the Indians convincingly in the winter of 1983, we knew that it was only a matter of time before they became a cricketing superpower. The self-belief the World Cup victory had given Indian cricket had little parallel. It was great for your cricket,” said the greatest West Indian captain ever.

“I don’t want to go into what went wrong for us. We did not bat well is the very simple answer. We needed one batsman to stay on for a big score but that didn’t happen. Indians bowled and caught well and never really allowed us to get into groove, which is so very essential in a big final,” Lloyd concluded.

The Birth of a Cricketing Nation