The Birth of a Cricketing Nation 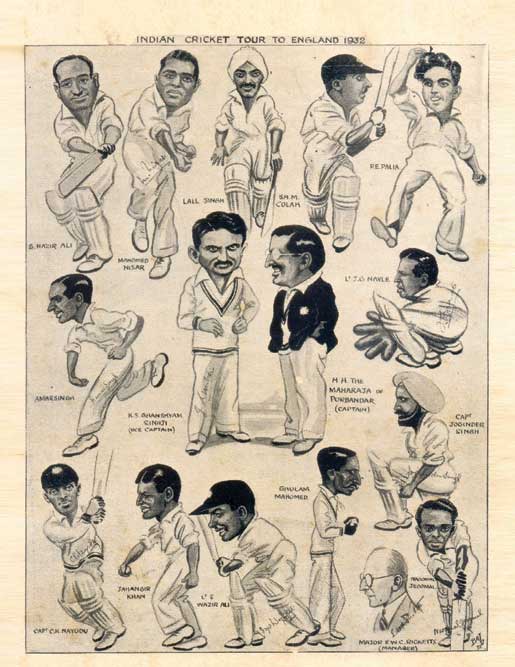 
AS THE INDIA-England contest restarts in Birmingham, it is time to celebrate the 90th anni­versary of this very famous rivalry. It was 90 years ago in 1932 that it had all started at Lord’s when a young Indian team undertook a journey to the British shores from a colony. For them it was a big moment. Still un­der British rule and with the nationalist movement gather­ing steam back home, the tour had serious significance that often went beyond the sport field. For the Indian team it was essential to do well and make a statement. It was their de­but Test match and an opportunity to excel and make a state­ment to the world. In CK Nayudu they had someone who could easily rival the world’s best and who was nominated by Wisden as a player of the year in 1933. Despite the politi­cal turbulence back home, the tour captured a lot of public attention in India with newspapers publishing regular re­ports on what the team was doing in England. The build-up had started approximately three months before the game and makes for fascinating reading. The reportage is also an eye-opener as to how sport was covered and how reportage has evolved over time to what it is today. As we celebrate the 90th anniversary, it is perhaps pertinent to look back at what transpired and celebrate the men who started a journey, which today is turning a new leaf in Edgbaston.

The Times, London, on March 1, 1932, one-and-a-half months before the Indians embarked on their tour of England, published the following report:

“The game gown on…The Delhi police may be having three sharp rounds with a rioting crowd in the Chandni Chowk, the crowded bazaar of the old city, but a mile or two away on the club ground set in the gardens that 400 years ago Shah Jehan built for his princess, a Roshanara side will be playing the Punjab Wanderers or an Army team from New Cantonments will be fielding in the white sunlight…

Here is the team for England:

It will be seen that the team is composed entirely of Indians; the question of selecting Englishmen playing in India did not arise.”

And soon after the Indian team arrived in England on April 13, 1932, the Evening Standard commented on the socio-political significance of the tour:

“No politics, no caste, just cricket. This is the unofficial slogan of the cricket team that has come from India after a lapse of 21 years to try its strength against England and the first class counties.


Despite the political turbulence back home, the tour captured a lot of attention in India with newspapers publishing regular reports on what the team was doing in England. The build-up had started three months before the game. The reportage is also an
eye-opener as to how sport was covered and how reportage has evolved

There has never been such a team of contrasts meeting on the common footing of cricket. The 18 players speak eight to ten lan­guages among them; they belong to four or five different castes.

Caste demands that the Hindus do not eat beef or veal, and that the Mohammedans avoid pork, bacon and ham. So to prevent any difficulties at meal times the order has gone forth that these things must not appear on any menu during the tour. Instead the men will eat mutton, chicken and fish.

The team contains six Hindus, five Mohammedans, four Parsees and two Sikhs. The Mohammedans forswear alcohol by religion and most of the others do so by choice. The Sikhs, who will play cricket in turbans, are similarly denied smoking…”

The Indian team played its first match against TG Trott’s XI at Pelsham Farm, Pearmarsh near Rye on April 29, 1932. The visitors did well. Malaya-born Lall Singh led the way and against MCC on May 22, 1932, CK Nayudu’s capabili­ties were revealed to the world. Nayudu, Wisden Cricketer of the Year in 1933, scored the first Indian century of the tour and in style. The Star’s headline on May 22, 1932 summed it up: “The Hindu Bradman in Form at Lords”. The Observer was equally eloquent: “A brilliant not out innings of 116 by C.K. Nayudu was the feature of the first day’s play between All-India and the MCC.” As it happened, Duleepsinhji had played against India in the first match.

The English were in for a surprise in the first half-hour of the first and only Test at Lords. Excellent bowling and fielding from the Indians saw MCC reduced to 19 for 3. A report in The Birmingham Post said:

“It was an extraordinary start to the match. Sutcliffe and Holmes, Yorkshire’s record smashing opening pair, united in a similar manner under the banner of England, went out full of cool confidence…But the first ball of Nissar’s second over…was an in-swinger and Sutcliffe, playing with the edge instead of the mid­dle of the bat, diverted it into the wicket—and one of England’s greatest batsmen was out…The disappointment was redoubled and revived when the last ball of the same over, a delivery per­fect in flight, length and pace, sent Holmes’ off stump spinning through the air, while the batsman was only half way through the stroke…Woolley and Hammond were now together…

When he (Woolley) had got nine in 20 minutes, he played a ball from Nissar to a point between short leg and mid-on. The stroke was worth a comfortable single and no more, but for some extraordinary reason an attempt was made to secure two runs. The fielder, the blue turbaned Lall Singh, threw in rather wildly, but even so the wicketkeeper had time to gather it and remove the bails while Woolley was still several feet from home. The wicket was thrown away by wild calling, and three men were out for 19…”

India lost the match by 158 runs. But the grit shown at Lords clearly conveyed to the world that the Indians would soon carve out their own corner in the world of cricket. This was alluded to by the English captain Douglas Jardine who went on record to say the Indians would become a major cricketing power within a decade. While that did not happen and India had to wait until 1952 for its first Test win, Lord’s 1932 will forever remain a very special moment in India’s cricket history.